Why Night Hunter Loses to Longbow 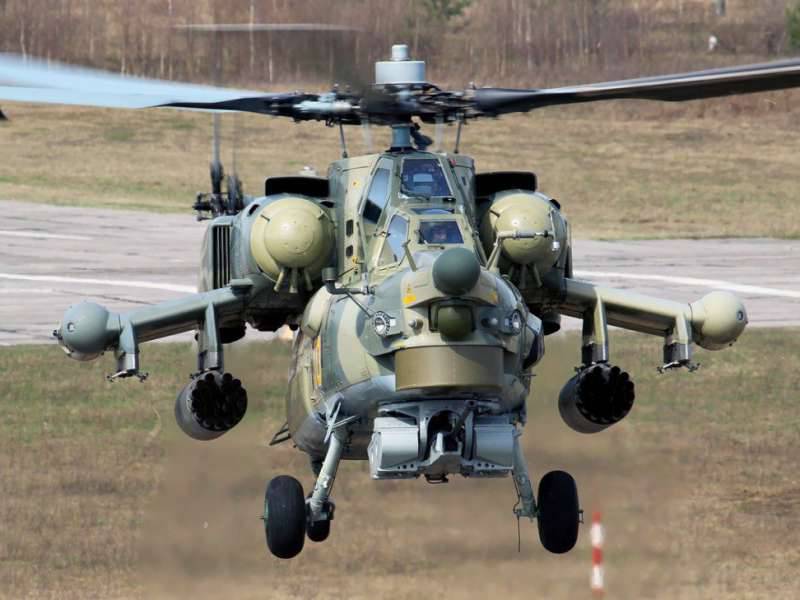 We are accustomed to believe that our helicopters are among the best in the world, and some of them have no equal at all. However, as we know, as a result of a long-term tender, the Indian Ministry of Defense ultimately decided to purchase American Ap-64D helicopters Apache Longbow (“Longbow” from English - “Longbow”), and not Russian Mi- 28HNE "Night Hunter". Is "Apache" superior to our "Mi"? Let's try to figure it out.

It is known that electronic equipment has become an important part of helicopter armament. The effectiveness of reconnaissance and control greatly depends on it. weapons. The beginning of the creation of the Mi-28HE helicopter was a response of the Soviet Union to the appearance of the American Apache helicopter. It should be recalled that the completion of work on the Mi-28HE fell on the period of Russian reforms, when the backlog of our country from the West in electronic, micro- and nano-electronic, as well as computer technologies continued to increase. Today, none of the created models of Russian weapons can not be provided for 100% elements of domestic production. The backward element base causes an increase in the mass, dimensions of the apparatus and its insufficient efficiency and reliability.

Let us consider which combat characteristics of the Apache helicopters forced the Indian Defense Ministry to purchase them.

The on-board radio-electronic equipment (avionics) of the Apache helicopter and the homing heads of various modifications of the Hellfire missile were developed under conditions of a high level of development of radio-electronic and other technologies. The Hellfire anti-tank guided missile (ATGM) was constantly upgraded and went from a second-generation missile (AGM-114A) from a semi-active laser seeker to a third-generation missile (AGM-114B) using a radar (HL) GPS.

When creating an ATGM complex for the Apache, the task was to significantly reduce the time the helicopter was under enemy sighting when hitting missiles thanks to highly intelligent avionics and the ability to launch a salvo launch of long-range missiles using armored vehicles.

The main advantage of the Apache Longbow helicopter avionics is that by the time the helicopter reaches the optimum height for salvo firing, targets are already determined in order of importance and the missiles are aimed at them. The avionics of the American helicopter, having the ability to determine the differences between anti-aircraft complexes and wheeled vehicles, as well as other targets, significantly increases the survivability of the Apache on the battlefield.

The onboard electronic equipment "Apache Longbow" provides: automatic detection of fixed and mobile targets at the maximum firing range; identification and determination of the degree of importance of each goal in five classes (classifies and allocates priority); tracking of targets, the coordinates of which are relative to the helicopter are transmitted to the rocket, if it is located outside the capture zone by the homing head; the transfer of the exact coordinates of the detected targets to other helicopters, strike aircraft or ground points.

The tandem warhead (warhead) of the Hellfire rocket due to the imperfection of the Russian dynamic defense (DZ) design tanks (the length of the DZ element is 250 mm) has a probability of overcoming it of 0,8–0,9 and armor penetration of 1000 mm, which ensures a high probability of damage to armored vehicles.

The high level of development of electronics allows the US DoD to start adopting a fourth-generation universal universal JAGM ATGM from the 2016 for installation on various ground forces, air force and naval forces. The new missile installed on the Apache will have an 16 km firing range, which will significantly increase the effectiveness of hitting enemy tanks (the firing range of ATGM from aircraft - to 28 km). As a result, thanks to the long-range JAGM missile firing range, the helicopter does not enter the enemy's short-range attack zone.

The Mi-28HE helicopter is designed to engage ground and air targets. In the reference editions are listed components of the avionics of this machine. But for some reason there is no assessment of the conformity of the appearance of the avionics with the functional purpose of the attack helicopter. Particular attention in this regard deserves the analysis of the process of destruction of armored vehicles and other ground targets using the “Attack” anti-personnel missile system, which forms the basis of the Mi-28HE ammunition. In this case, to control the rocket, a semi-automatic guidance method is used, in which the gunner holds the sight on the target, and the guidance system automatically leads the rocket to it. The coordinates of the rocket relative to the sighting line are determined using the optical system (located on the Mi-28HE) and the tracer mounted on the rocket. The control commands from the helicopter are transmitted to the rocket by radio.

The use of the Attack ATGM is extremely dangerous, since the total time for a visual search for a ground target and a missile control is longer than the response time of modern air defense systems. Reaction time is understood as the time from the detection of a helicopter to the launch of an anti-aircraft missile from a launcher, which for a short-range anti-aircraft missile system (ZRPK) is 4 – 10 с. The Mi-28HE is most susceptible when firing at a range of 4 – 6 km, which requires an increase in flight altitude to ensure reliable visual contact with the target. With the price of the helicopter equal to the price of 3 – 4 tanks, it is doubtful that the Mi-28HE with the second-generation anti-tank systems will solve the problem of destroying targets, taking into account the cost-effectiveness criterion.

In relation to the solution of a particular combat mission, 7 variants of the Mi-28NE ammunition are provided, consisting of various combinations of obsolete ammunition: ATRA ATGM, Igla anti-aircraft guided missiles (SAM), and unguided aviation missiles (NAR) S-8 and S-13, as well as shots to the 30 mm cannon 2A42. The “Attack” missile can be equipped with either a cumulative tandem warhead for hitting armored vehicles, or a rod for hitting air targets, or a warhead equipped with a volume-detonating mixture to hit ground targets.

The results of the comparison of weapons and avionics of the Mi-28HE and AN-64D helicopters are not in our favor.

The Igla anti-aircraft missile system was put into service in the 1983 year. The probability of hitting a fighter with a single anti-aircraft Igla guided missile equipped with a thermal homing head is 0,4 – 0,6. The speed of the fighter should not exceed 300 m / s. When shooting targets for thermal noise, the probability of their being hit by one missile defense will be 0,2 – 0,3.

Uncontrolled C-8 aircraft missile (maximum firing range - 4 km) with a cumulative fragmentation warhead has armor penetration 400 mm, which is sufficient for effective destruction of unarmored and lightly armored vehicles. But Mi-28HE using this weapon can be shot down not only by short-range air defense systems, but also as a result of shelling by portable anti-aircraft missile systems ("Stinger", "Mistral") that are in the battle formations of the enemy.

The media notes that the Mi-28НЭ has a high level of combat survivability, the crew cabin of which is fully armored. But is it really? Anything that flies cannot have a serious reservation. What kind of reservation can we talk about when small arms are capable of disabling rotary-winged cars? For example, the 12,7-mm armor-piercing and incendiary bullet (index 7БЗ-1) penetrates the armor with a thickness 20 mm at a distance of 1500 m. At the same time, the crew’s armored box is made of 10-mm aluminum alloy sheets on which ceramic tiles are glued. This design can save the crew from bullets caliber 7,62 mm.

The main drawback of the Mi-28HE is obsolete weapons, unable to hit targets without entering the enemy's short-range air defense system. These helicopters in the ranks of the army aviation are unlikely to make a significant contribution to the aviation support of the Ground Forces.

The meeting of the State Commission, chaired by Air Force Commander Alexander Zelin, at which a decision was made to adopt the Mi-28HE helicopter, took place on the last days of the 2008 of the year. It should be noted that the creation of this machine lasted 30 years. A year before this event, the article “Peculiarities of military scientific research on the substantiation of the concepts and appearance of promising aviation complexes” appeared in the journal “Military Thought” (No. 8 for 2007 year), prepared by a team of authors: Colonel Ph.D. A.L. Gusev, Lieutenant Colonel Ph.D. A.K. Denisenko, Colonel Dr. of Sc. Vs Platunov. In this work, a great deal of attention at the initial stage of the creation of aviation complexes (AK), including helicopters, was paid to military-scientific research related to the substantiation of the concepts, looks and requirements for the promising and modernized AK. It can be assumed that after this article there was no instruction to carry out work on the basis of the modernization of the Mi-28HNE to substantiate the new weapons and the avionics, which would really correspond to the new attack helicopter. It is puzzling that this article, being a breakthrough in the AK methodology, turned out to be unused in relation to the Mi-28H helicopter.

The Mi-28HE helicopter was intended mainly for the defeat of American tanks. But the Americans actively improved the armored vehicles, as a result of which modifications from the M1 to the M1А1, М1А2, М1А2 SEP appeared. To date, thousands of tanks have been upgraded. For example, a Mi-28HE helicopter is completely useless to fire an MkNUMXA1 SEP tank with an Attack missile, which is equipped with a highly effective active protection system. Modernization of the Abrams should end in 2 year.

It must be assumed that the creators of the Mi-28HE did not follow the modernization of foreign armored vehicles and did not carry out adequate technical measures. This is evidenced by the fact that the tactical and technical tasks and tactical and technical requirements issued to the creators of the Mi-28HE in the 1978 year, through the 30 years needed to be clarified. But that did not happen.

What did the Americans achieve by winning the tender, where the attack helicopters were presented? They strengthened the Indian army "Apache" to fight with Chinese tanks. This is a review of the US policy of containing China. Following this event, the Apache helicopter base will be organized, where American instructors will be able to conduct training sessions on helicopter materiel and piloting. Ammunition storage facilities and helicopter repair shops will be equipped.

Russia for a long time gave up its place in India in attack helicopters, which harmed the Mi-28HE brand. This situation requires disassembly and adoption of appropriate decisions in order to prevent a crisis in the creation of domestic attack helicopters.

Ctrl Enter
Noticed oshЫbku Highlight text and press. Ctrl + Enter
We are
Best in class: Mi-28H and AH-64D Apache LongbowApache Longbow for Indian Air Force
360 comments
Information
Dear reader, to leave comments on the publication, you must to register.