It is no secret that for a long time we lagged behind the advanced western countries in the development of robotics for defense needs. But in recent years, a serious breakthrough has been made. Today, there are hundreds of different robotic devices in the army, capable of performing the most varied work, from aerial reconnaissance to making passages in minefields. Are all problems solved, what are the prospects? These questions "MIC" answered the head of the Main Research and Testing Center for Robotics of the Ministry of Defense of the Russian Federation, Sergei Popov.

- Sergey Anatolyevich, how has the situation with the development of robotics in the defense ministry changed? There was a single body that is responsible for this area?

- The situation has changed dramatically. If earlier various departments and organizations dealt with this issue separately, and without a single clear plan, now the Main Research and Testing Center of Robotics of the Ministry of Defense has been created. It is formed on the basis of a government order from February 15 of the year 2014.

- In the armies of foreign states, a bet is made on promising means of armed struggle, including military robotics. The geography of its application is already quite extensive. This is Yugoslavia, Iraq, Afghanistan, Libya, Syria ... Unmanned aviation used in all modern armed conflicts. This makes it necessary to build up our combat potential by creating qualitatively new means. One of the promising areas is automation based on military robotics technologies.

The main purpose of our center is to conduct applied research and testing related to the development of military robotic systems (RTC). That is, we are imputed to the functions of the leading research organization of the Ministry of Defense in this area.

- Perhaps the answer is on the surface, but why do we need military robotics, if no one performs a combat mission better than a soldier and officer?

- It all depends on the specific situation. You must agree: why risk life when demining minefields in a combat situation under enemy fire, if the robot successfully copes with it. I'm not talking about intelligence and observation of the terrain over the territory of the enemy.

The practical need for equipping the Armed Forces with robotics is determined on the basis of the predicted nature of prospective wars and armed conflicts, taking into account specific tasks to be accomplished, which are characterized by the following main features:

-high risk for human life and health;
-significant complexity and complexity of implementation;
- a big responsibility for the results.

Simply put, robots can reduce combat losses and maximize the efficiency of performing tasks to the destination.

- You said that the situation in the Armed Forces of the Russian Federation with robotization has changed dramatically, the Main Research and Testing Center for Robotics has been created. And what other activities are being held in the Ministry of Defense for army robotization?

- Much had to start almost from scratch. But at the moment in our department:

-the concept of the use of RTK for military purposes has been developed;
-developed a comprehensive target program "Creating a promising military robotics to 2025 year";
-Under the leadership of the Minister, the Commission of the RF Ministry of Defense works on the development of such complexes;
-developed state military standards that establish uniform requirements for military robotics and regulatory and technical documents;
-organized work on equipping landfills and test centers;
- there will be training of specialists on new and promising samples of military robotics in the system of professional education of the Ministry of Defense and at industrial enterprises engaged in the development and production of RTK.

As you can see, the foundation is good.

- What exactly is meant by the robotization of the Armed Forces? 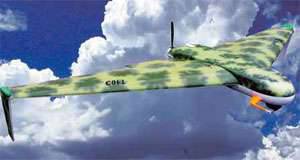 - It is an integral part of the overall process of raising the quality level of the WWTE that meets the requirements of the information age. This direction is considered as one of the most important in the improvement and qualitative updating of the forms and methods of solving combat missions, technical and logistic support, including medical.

Speaking in a scientific language, the robotization of the Armed Forces is understood as a set of interconnected organizational and military-technical measures aimed at mastering deserted or poorly populated military technologies that ensure the complete or partial elimination of personnel when solving combat and other tasks associated with danger to life and health . I repeat: one of the main goals is to reduce combat losses, the level of injury and occupational diseases of military personnel.

As for the other tasks, this is:

-the imposition of a new quality in service with and advanced models of the military installation;
-expansion of the functionality of the fighter;
-reduction of the negative impact of the human factor on the effectiveness of the confrontation due to the automation of the most responsible, time-consuming and dangerous operations.

Thanks to the implementation of the state defense order and the state program of armaments, it is now possible to master and actively use a wide range of land, sea and air military robots.

Since 2011, the number of unmanned aerial vehicles in the Armed Forces has increased ninefold, ground robots have tripled, and sea robots have quadrupled. The participation of UAVs in the anti-terrorist operation of the videoconferencing system in the Syrian Arab Republic can be cited as successful examples of the use of robotics. UAVs are actively involved in the search for illegal gangs. Ground-based RTKs are used for demining in the North Caucasus. 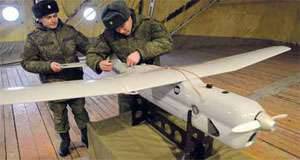 At the present stage of technical development, engineering troops use the latest robotic complexes. For example, "Uran-6", designed to clean the area from anti-personnel mines and explosive objects, "Uran-14" - to extinguish fires. These RTKs were also used in the Center-2015 strategic command and staff exercise: they participated in practical demining at the Donguz and Ashuluk test sites.

After the completion of the military tests of the robotic demining and fire-fighting complexes, they will be equipped with all units and training centers of the engineering troops.

At present, development work is under way, new generation TACs are being tested. Already this year a number of them will go to the troops.

Thus, military robots are primarily intended for solving the tasks of combat (operational), technical and logistic support of troop operations in conditions where the use of crew, manned and manned vehicles is either impossible or impractical. Highly automated control, the introduction of artificial intelligence technologies make it possible to achieve fundamentally new tactical and technical characteristics that are inaccessible to manned (crew) facilities, minimize personnel losses and remove the associated restrictions on the forms and methods of using traditional forces.

- And yet the robot is still exotic in the mass sense. Let's explain what RTK consists of. What other samples can be cited as an example?

- A military robot is a collection of functionally related elements. In particular:

base carrier - it can be chassis of any configuration, intended for use in various environments;
specialized attachments (built-in) equipment in the form of a set of removable modules useful (target) load;
means of maintenance and service used in preparation for the use and technical operation of the robot.


The composition of the specialized equipment is established on the basis of the functional purpose of the robot and may include:

In addition, as you understand, any robot requires support and maintenance. That is necessary:

No matter how intelligent and autonomous a robot is, it cannot do without human participation. 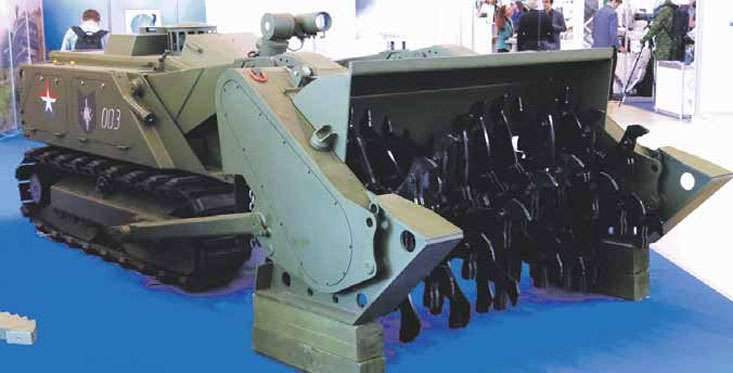 "Uranium-6" is designed to clean the area from anti-personnel mines and explosive objects
Photo: arms-expo.ru

The military-scientific conference on robotics held at Patriot Park in February by the Ministry of Defense of 10 showed samples used in the Armed Forces, and for the first time, it showed initiative-oriented developments. In addition to the aforementioned "Uranas", there were demonstrated unmanned aerial vehicles "Eleron" and "Orlan-10". Of the dozens of models developed by defense enterprises on a proactive basis, it is worth mentioning a mobile autonomous robotic system of increased cross-country ability to accompany the MARS A-800 infantry. Among the exhibits were new UAVs, including ultralight tactical level, high-mobility mobile robotic platforms. Many have unique performance characteristics. In total, more than 150 samples and technologies were exposed, more than 950 participating specialists participated. And the number of visitors to the event almost doubled expectations. The conference was conceived as a specialized discussion platform for discussing robotization issues and was the first large-scale event on this topic that brought together the leadership of the Ministry of Defense, representatives of power structures, the Military Industrial Commission under the Government of the Russian Federation, research organizations, and defense enterprises.

As for problems, a systematic approach to the robotization of the Armed Forces will align the capabilities of the military-industrial complex with the requirements of the Ministry of Defense for a military-purpose RTC. The question is successfully solved. There is a comprehensive targeted program “Robotization-2025”, approved by the Minister of Defense in October 2014. It promotes effective coordination of research in our field.

- In your opinion, which areas of scientific research are most relevant for robotics?

- At this stage, the implementation of comprehensive large-scale research to determine the place and role of robotics in the future weapon system of the army acquires special significance. It is important to develop promising forms and methods of combat use, the composition of the robotic formations.

- Do you control this process?

- The trips of our center's working groups to industrial enterprises for the selection of proposals and the implementation of projects will be planned and regular. For this purpose, a register of manufacturers specializing in the creation of samples and technologies of military robotics is being developed.

With regard to the review and examination of initiative projects, the Scientific and Technical Council was established at the Main Center, which included leading experts in the field of military robotics, including 15 doctors and 18 candidates of science.

- What are you going to work on for the Main Center for Military Robotics in the near future?

- The front of works is quite extensive. The most in demand is the creation of a scientific and methodological apparatus for substantiating problems, for whose solution it is advisable to attract robots. The formation of a multi-purpose integrated system for modeling the appearance and virtual testing of promising RTCs and military systems, building a methodological apparatus to justify a rational nomenclature and the required number of robots, the formation of a lifecycle management concept, in particular, a technical operation system based on integrated logistic support A separate big question is the creation of a system of education and training of specialists in military robots.

To implement these areas, the Main Center has, I will emphasize once again, the highly professional scientific potential of military personnel and civilian personnel. A cohesive team of young scientists dedicated to military robotics has been formed. All this allows us to solve the tasks and look at tomorrow with confidence.