The Georgian armed forces, like many other post-Soviet armies, were built from a state of complete chaos, becoming a synthesis of the remnants of the Soviet army and the local militia. In the Georgian case, local specifics were added: at the beginning of the 90s, the country experienced a triple civil war - for power in Tbilisi, for retaining Abkhazia and South Ossetia.

The first of these wars was largely responsible for the loss of the other two. After that, for 10 years, the Georgian army remained essentially legal gangs, extremely underfunded and completely incompetent.

Saakashvili, who came to power at the end of 2003, achieved a radical change in the situation in the country and in the army in particular.

And created, and ditched

Thanks to the improvement of the economic situation and curbing “grassroots” corruption, funding for the Armed Forces has increased even by several orders of magnitude. Western military assistance appeared, the scale of which, however, is greatly exaggerated (in reality it was a few percent of the country's defense budget). Georgia began to massively purchase weapon abroad, primarily in the Czech Republic and Ukraine, among other suppliers were Bulgaria, Serbia, Greece, Turkey, Israel, the United States. Acquired almost exclusively the former Soviet or Eastern European, created on its basis, which was modernized using Western technologies. Although the military draft was formally preserved in Georgia, the combat units were completed with contract soldiers, that is, in fact, they were a professional army.

In general, the Georgian Armed Forces for 4,5 have gone very far from the state of Shevardnadze’s times. Nevertheless, their potential was not enough to establish effective control over Abkhazia, South Ossetia and for war with the RF Armed Forces. But the decisive role in the further development of events was played by the subjective factor.

Saakashvili was very dizzy with success (which he really did have in politics and economics), while he was distinguished by obvious psychological instability, complete incompetence in military matters (which he certainly did not understand) and genuine faith in the West. He seriously seriously believed that he had created a modern professional network-centric army, which would not only instantly crush the armed forces of Abkhazia and South Ossetia, but also, if necessary, would easily win over the armed forces of the Russian Federation. And in the case of some extremely unlikely unforeseen circumstances, NATO will certainly come to the rescue immediately. By the way, there is nothing particularly ridiculous about this, after all, even in our country a significant part of the population is absolutely confident in the advantage of a professional army, in the gigantic combat power of NATO and its aggressive essence. Another thing is that the president of the country should not be guided by philistine ideas, but must see reality. But the Georgians were not lucky with the president, although at that moment they didn’t think so.

On the night of 7 on 8 in August 2008, almost all of the military and political leadership of South Ossetia fled from Tskhinvali to Java. Nevertheless, the Georgian troops got bogged down in street battles with the practically uncontrollable Ossetian militias. And then the armed forces entered the battle.

Contrary to the stable opinion, Russian troops had no numerical superiority on the ground. There were very big problems in the air. Nevertheless, the war ended in the crushing defeat of the “modern professional” army of Georgia, which on the third day of the war essentially simply collapsed, ceasing all resistance and leaving behind a huge amount of weapons, ammunition and fully operational equipment. Which, by the way, was confirmed by the well-known fact: all other things being equal, the draft army will always win the hired (professional) at least due to a much higher motivation of the personnel.

And NATO, of course, did not lift a finger for the sake of Georgia. This could be easily guessed if guided not by propaganda, but by reality. Moreover, at the end of the war, the alliance imposed a tacit but tough moratorium on the country's supply of arms. So sometimes the statements that Georgia has so far restored its combat power are completely absurd. 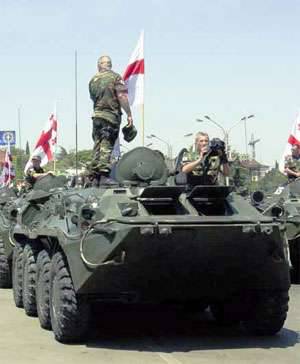 Almost all of this equipment is Soviet in origin and time of production. On its basis, it is impossible to build a modern network-centric army, which Saakashvili did not understand. Own defense industry does not exactly fix. Although the country got the Tbilisi aircraft factory, where the Su-25 was going to be built during the Soviet era, Georgia, naturally, was not able to organize their production without Russian components. In recent years, their own Lazika infantry combat vehicle and Didgori BTR several modifications have been created at the Tbilisi tank repair plant, but they cannot seriously strengthen the country's military potential either in quantity or quality.

Of course, there can be no talk of accepting Georgia into NATO, even if for purely formal reasons - it has not settled its territorial problems. The real reason is that neither the United States, nor even Europe is going to not only fight, but at least get the theoretical risk of a conflict with Russia because of some Georgia. And, all the more, there can be no question of her returning Abkhazia and South Ossetia by military means (the popular talk in some media that Tbilisi is preparing for a rematch is not to be taken into account). The country does not have the resources to create capable armed forces, NATO is not going to provide any assistance. The current leaders in Tbilisi are no less anti-Russian and pro-Western than Saakashvili, but for them it’s still a political course, not a psychological diagnosis. Accordingly, they do not plan any war, realizing its complete hopelessness.

However, a completely new situation will develop in the event of the beginning of an armed conflict between Russia and Turkey because of the fundamental contradictions in Syria (it is, of course, not inevitable, but not excluded). Geographically, Georgia will be between two opponents, at the same time blocking communications for Russia with its 102 military base in Armenia. This fact alone will automatically be on the side of Turkey, therefore in Tbilisi it may be tempted to ask Ankara for help in returning its former autonomies. True, in this case, Georgia itself substitutes a full blow. And this time, unlike August 2008, the Kremlin will not make a political decision to stop troops in 40 kilometers from Tbilisi. On the contrary, they will decide to pierce Georgia through, thereby establishing a direct link with Armenia.

It is difficult to say whether the Georgian statehood will end there or the country will lose some territories (for example, Adjara, the Javakheti populated by Armenians). But the economic damage in any case will be gigantic. Finally, the Georgian armed forces will cease to exist. And even more so will have to forget about the return of autonomy.

Ctrl Enter
Noticed oshЫbku Highlight text and press. Ctrl + Enter
We are
Georgian Army: before and after the warArmament from the exhibition "Made in Georgia"
65 comments
Information
Dear reader, to leave comments on the publication, you must to register.