Foreign press: PAK FA is not the fifth generation fighter

February 29 2016
190
The development of new weapons and military equipment has always attracted the attention of specialists, the general public and the press. Such attention is manifested in the form of a mass of publications, disputes, etc. Quite often debaters and analysts come to very interesting conclusions. From time to time, relying on some arguments, the authors of such materials are trying to debunk certain "myths" that allegedly occur in some projects. A few days ago there appeared another article of this kind.


The 18 February edition of IHS Jane's Defense Weekly published Royben F. Johnson’s article “Singapore Airshow 2016: Analysis — PAK-FA’s Asian Export Hopes Style” (“Singapore Airshow 2016: Analysis — Asian Export Hopes of the PAC Project FAs are faced with a lack of fifth-generation qualities. ”) The title clearly shows that the author of the article and his sources doubt the prospects of the Russian project PAK FA / T-50 and believe that it does not fully meet the requirements for the fifth generation of fighters.

IHS Jane's author recalls that at the recent air show in Singapore, the United States introduced its fifth-generation fighter Lockheed Martin F-22 Raptor. In addition, there were statements about plans to sell a significant number of the latest F-35 Lightning II fighter jets to countries in the Asian region. Currently, a number of Asian countries are particularly interested in fifth-generation fighter aircraft, which can be satisfied with the help of supplies of American-made equipment. 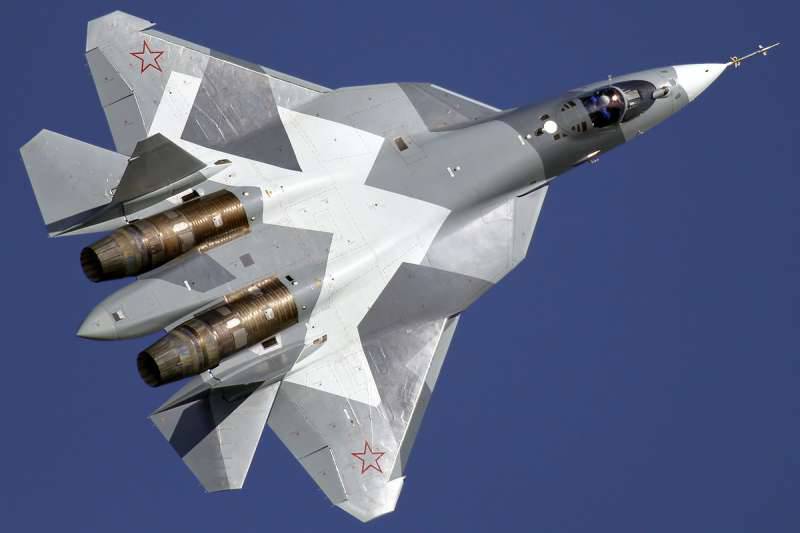 Representative of american aviation industry told IHS Jane's that several countries are currently developing their own fifth-generation fighter projects. Nevertheless, according to him, not all such developments can be attributed to a new generation of aircraft.

Thus, a representative of the company Lockheed Martin recalled the Russian project of the aircraft PAK FA, which is positioned by the developer as a fifth-generation fighter. However, in the opinion of the American specialist, the PAK FA belongs to the fifth generation only in words. He believes that the fifth generation is not only a specific form that provides stealth.

According to the plans of the Russian industry, the new aircraft PAK FA / T-50 in the future will be delivered to Asian countries that already have experience in operating Su-based technology. Indonesia, Malaysia and Vietnam are considered potential buyers of such fighters. China, in turn, falls out of this list, as it develops its own projects of similar equipment.

The unnamed Russian specialists referred to by RF F. Johnson believes that exporting T-50 aircraft may face some problems. The main reason for this is the onboard equipment and aircraft components. Despite a significant increase in cost, they lack the technologies of the fifth generation. In the context of such problems, the new PAK FA aircraft can be compared to the existing Su-35 fighter, which has already become the subject of export contracts.

The main onboard systems of the fighter T-50 RF Johnson calls the radar "Irbis" and the engine type "117С." Both of these products are offered for installation on the PAK FA, and are also used on the Su-35 aircraft. In addition, according to IHS Jane's, some other units of the two fighters are also unified. Referring again to unnamed specialists, the author assumes that the new equipment, which will be installed only on T-50, will only be a further development of the existing Su-35 systems.

As you can see, unnamed experts and the author of the publication IHS Jane's Defense Weekly doubt the prospects of the newest Russian fighter, referring to the features of its on-board equipment. It is noteworthy that similar publications in recent days have appeared not only in “Jaynes”. Consider another similar article from another publication.

February 24, the American edition of Business Insider, published an article by Jeremy Bender entitled “Russia's new fighter jet is the 5th-generation 'in name only'” (“The newest Russian fighter belongs to the fifth generation only in words”). As can be seen from the title, the author of this material also tried to study the Russian project PAK FA / T-50, and the results of this study were not entirely pleasant conclusions for the Russian industry. J. Bender believes that the newest Russian aircraft does not meet the requirements of the fifth generation fighter.

His article, the author of Business Insider begins with a reminder of current projects. Currently, the United States continues to develop its second fighter of the fifth generation Lockheed Martin F-35 Lightning II. At the same time, the Russian industry is engaged in its own project of similar technology. Bender argues that the Russian project PAK FA ("Advanced Aviation Complex of Frontal Aviation"), also known as T-50, has some features that do not allow it to be rightfully attributed to the fifth generation of fighters.

Further J. Bender refers to IHS Jane's article and cites the main facts from this material. Thus, it is argued that the Russian industry unreasonably classifies the PAK FA project to fifth-generation fighter aircraft, which is due to the lack of appropriate technologies and components. In particular, the author of Business Insider mentions the argument regarding the engines: the T-50 has the same powerplant as the Su-35 generation "4 ++". Also mentioned is the unification of some other systems.

According to the author of Business Insider, even the differences in the onboard equipment of the new aircraft do not allow it to be rightfully attributed to the fifth generation of fighters. At this time, J. Bender builds his judgments on the basis of last year's publications of analysts of the portal RealClearDefense, who at one time got access to some documents of the Ministry of Defense of India. This country is showing interest in the Russian project and is considering the possibility of jointly developing a fighter based on it.

According to RealClearDefense, the PAK-FA / T-50 project has several technical and technological problems associated with certain elements and components. Among other things, problems include insufficient engine performance, low reliability of the existing radar station, as well as insufficiently low stealth indicators.

The question of stealth characteristics, according to Bender, is worthy of a separate consideration. Previously, analysts from RealClearDefense wrote that in 2010-11, estimates of such indicators of the latest Russian aircraft were carried out. Then the calculations showed that the effective dispersion area (EPR) of the T-50 aircraft is at the level of 0,3-0,5 sq. M.

At the same time, representatives of the US Air Force hinted that the EPR of the F-22 fighter is approximately equal to 0,0001 sq.m. The newer F-35 Lightning II fighter differs from the F-22 in lower stealth, since its ESR is at 0,001 m. In both cases, the effective area of ​​dispersion of American fifth-generation fighter jets is much smaller than that of the newest Russian aircraft.

J. Bender ends his article with a reminder of the current plans of the Russian Air Force. At the moment, it is planned to order 12 T-50 aircraft. It is mentioned that previously it was planned to buy about 52 aircraft, however, due to technical and economic problems, it was decided to reduce plans.

It should be noted that IHS Jane's Defense Weekly and Business Insider were not the only publications that published "sensational" news about the inconsistency of the T-50 aircraft to the requirements of the fifth generation of fighters. Such messages soon spread across other foreign media, and also got into the domestic press.

The latest foreign publications contain quite serious “accusations” that are hardly worth ignoring. Published information and assumptions require further consideration and analysis. In this case, as often happens, with a more detailed examination, the sensation turns into something strange and, at least, ambiguous.

First of all, it is necessary to pay attention to the attempts of the foreign press to study the characteristics of promising technology. So, comparing the EPR of the F-22, F-35 and T-50 fighters looks extremely strange and can hardly claim to be a serious research. The exact values ​​of these characteristics have not yet been announced and are unlikely to become public in the foreseeable future. The lack of accurate data on this score forces professionals and technology lovers to resort to various assessments, which, for obvious reasons, may not be true.

This is not the case with stealth indicators, but also with other characteristics. If part of the main indicators of foreign technology has already been published, the exact characteristics of the Russian PAK FA still remain a secret. Thus, comparing domestic and foreign equipment, it is necessary to rely on unofficial estimates, assumptions, etc. false information. It is hardly worth waiting for such comparisons to be true and prove to be objective.

Interesting statements RF Johnson and J. Bender regarding the onboard equipment of the T-50 and Su-35 aircraft. On these two aircraft, some unified units and units are used, which, according to foreign authors, adversely affects the characteristics of the newer PAK FA, and also does not allow it to be considered a fifth-generation fighter. In this case, foreign experts and journalists noted one of the features of the new projects, but at the same time they ignored the concepts of the 5 and 4 ++ generations.

Thus, the unification of components and assemblies, primarily engines and radar, is not a minus for the T-50, but a plus for the Su-35. Thanks to this approach, a plane with an “old” glider can compete with a completely new model in terms of a number of characteristics, and the use of used components and components reduces the cost of equipment. The interpretation proposed by the foreign press of such an approach to the creation of aviation technology looks doubtful.

Yet the most interesting feature of the current situation is revealed at the beginning of the article from IHS Jane's Defense Weekly. Roiben F. Johnson writes that the American aviation industry is currently making plans to sell F-35 aircraft to Asian countries. At the same time, Asian countries are considered as buyers by Russian enterprises. Thus, Asia has already become a “battlefield” between manufacturers of weapons and equipment, and in the foreseeable future there will have to be a new “battle” for contracts for the supply of fifth-generation fighters.

If this is taken into account, it ceases to amaze the fact that the shortcomings of the project PAK FA / T-50 RF. Johnson was told by a representative of the American company Lockheed Martin, which developed both modern projects of fifth-generation US fighters. Thus, the statements of this representative are very similar to a not too successful attempt in advance, even before the start of competition, to spoil the image of a potential opponent. The press, in turn, gladly picked up the statements and made a “sensation” of them.

The result is that the shaft of publications about the incompliance of the T-50 aircraft with the requirements for the fifth generation of fighter aircraft goes back to the desire of one of the foreign companies to prepare in advance for the competition and change the opinion of the responsible persons in their favor, even using dubious methods. As they say, nothing personal - only business.

It is noteworthy that the PAK FA / T-50 project is still at the stage of preparing aircraft for deliveries to the Russian armed forces, and the development of an export modification, apparently, has not even begun yet. However, potential competitors did not wait and began to attempt to fight with an opponent in advance. One can imagine what the representatives of the foreign industry will say when the start of full-fledged work on the export modification of the T-50 or the negotiations on the supply of such equipment to foreign countries will be announced.

The article "Russia's newest fighter jet is 5th generation 'in name only'":
http://www.businessinsider.com/russias-newest-fighter-jet-is-fifth-generation-in-name-only-2016-2

Ctrl Enter
Noticed oshЫbku Highlight text and press. Ctrl + Enter
We are
Russia demonstrated the most promising weapons at INDO Defense-2014Another comparison in favor of the Su-35
Military Reviewin Yandex News
Military Reviewin Google News
190 comments
Information
Dear reader, to leave comments on the publication, you must sign in.