Obama: The United States will do everything possible to achieve a truce in Syria, but the White House has no illusions about this

February 26 2016
41
The White House has no illusions about an immediate cease-fire in Syria, but the United States will actively contribute to the implementation of the plan for the peaceful settlement of the situation in the country, reports RIA News Barack Obama's statement. 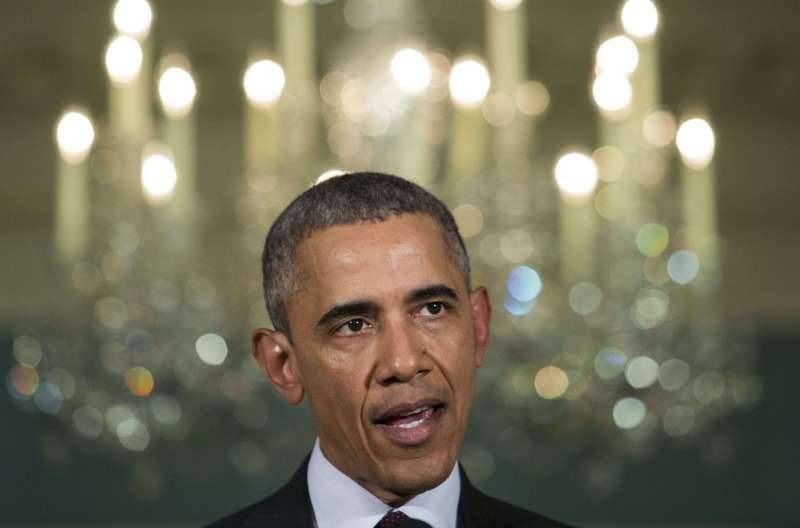 “If it (the truce) is implemented, and this is a very big“ if ”, the cessation of hostilities can reduce violence, provide more food and help to Syrians who are suffering and need them. It can save lives. Potentially, it can lead to negotiations on a political settlement that will help end the civil war, so that everyone can focus on the destruction of the IG, ”the president said.

“Therefore, the United States will do everything it can to maximize the chances of a cessation of hostilities,” he added.

According to Obama, a truce will not come at once at the scheduled time.

“The cessation of hostilities, which is scheduled for midnight tomorrow, is a potential step towards ending the chaos. Even in the best of circumstances, we do not expect violence to end immediately. We are confident that the fighting will continue, in particular, because not only the IS, but organizations such as Dzhebhat al-Nusra, which are not parties to the negotiations and hostile to the United States, will continue to fight, ”he said.

The President expressed the hope that the Syrian authorities and Russia will also fulfill their obligations under the agreement.

“All forces that are parties to the cessation of hostilities must cease attacks, including aviation bombing. Humanitarian aid must be allowed into besieged areas. Much will depend on whether the Syrian regime, Russia and their allies will fulfill their obligations. The days ahead will be critical, and the world will carefully monitor this, ”he said.

At the same time, the fate of Bashar Assad is still a stumbling block in negotiations with the Russian Federation and Iran.

“This is an area where significant differences remain between us and the Russians, Iranians and some other players on the ground,” Obama said.

“The process agreed in Vienna is clear - a transition to a more representative government, a new constitution and subsequently free elections. I repeat again: I am sure that such a future cannot include Bashar Assad. It is clear that after years of barbaric war, which he leads with his people, including torture, barrel bombs, siege of cities and famine, many Syrians will not stop fighting until Assad leaves power, ”the president said.

According to him, the IG had serious problems.

“Thanks to the coordination of many countries, including the continued work of Turkey to strengthen the border, the flow of foreign terrorist fighters to Syria seems to be finally slowing down. As a result, there are fewer IG fighters on the battlefield in Syria and Iraq, ”Obama said.

"The IG has lost a number of key cities - more than 40% of the territory in Iraq that it once controlled," he added.

“We destroy warehouses where the IG keeps its cash, their money literally turns into smoke. As a result, the IG was forced to cut wages to its militants, and this increasingly lowers their morale. We continue to receive reports of desertion and the executions of those who are trying to desert, ”Obama said.

“I want to make absolutely clear that there will be no cease-fire in relation to IS. We will continue the relentless fight against them ... We will continue to use all means to eliminate the threat of IG wherever they (the terrorists) are, ”he concluded.

Ctrl Enter
Noticed oshЫbku Highlight text and press. Ctrl + Enter
We are
Reports from the militia of New Russia for 7 September 2014 of the year
41 comment
Information
Dear reader, to leave comments on the publication, you must to register.