February 29 2016
17
In the German army during the Second World War, tank and motorized infantry (panzergrenadier) units, anti-aircraft, as well as anti-tank means of defense were assigned a very great importance. And if in the areas of concentration of troops towed anti-aircraft guns reliably covered ground units from aviation enemy, then on the march the problem was very complicated. The army needed mobile anti-aircraft weapons, in which the response time to an air threat (transfer from a marching to a combat position) would be minimal. The German designers found a way out of the situation in crossing the chassis of half-track artillery tractors and tanks with anti-aircraft guns of various calibers.


Of course, the German designers could not ignore one of the most famous guns of the Second World War, the famous "eight-eight". The success of the combat use of 8,8 cm FlaK 18 / 36 / 37 anti-aircraft guns in all theaters of hostilities was evident from the very beginning. The gun proved to be excellent even during the Spanish Civil War, and in the summer of 1940, the 88-mm guns literally pereselchel well armored French tanks. Often they became victims of precisely these anti-aircraft guns. Later, they proved themselves on the Eastern Front against the Soviet T-34 and KV tanks and in Africa, where Rommel successfully foxed the British, effectively using the existing 88-mm anti-aircraft guns against the well-armed Matilda II infantry tanks.

Possessing excellent ballistic characteristics, the “eight-eight” gun completely depended on the tractor and, in case of its breakdown or destruction, during an enemy counter-offensive, it was simply not possible to tow the gun by the forces of its calculation. Therefore, the German officers wanted to achieve greater mobility of this artillery installation. Even before the Polish campaign in Germany, there were ideas for installing 8,8 cm FlaK 18 on the chassis of semi-tracked armored personnel carriers or tanks. It turned out to be a daunting task to realize the desires of the military, as the anti-aircraft gun, which was unsuitable for these purposes, had a large mass and strong recoil. 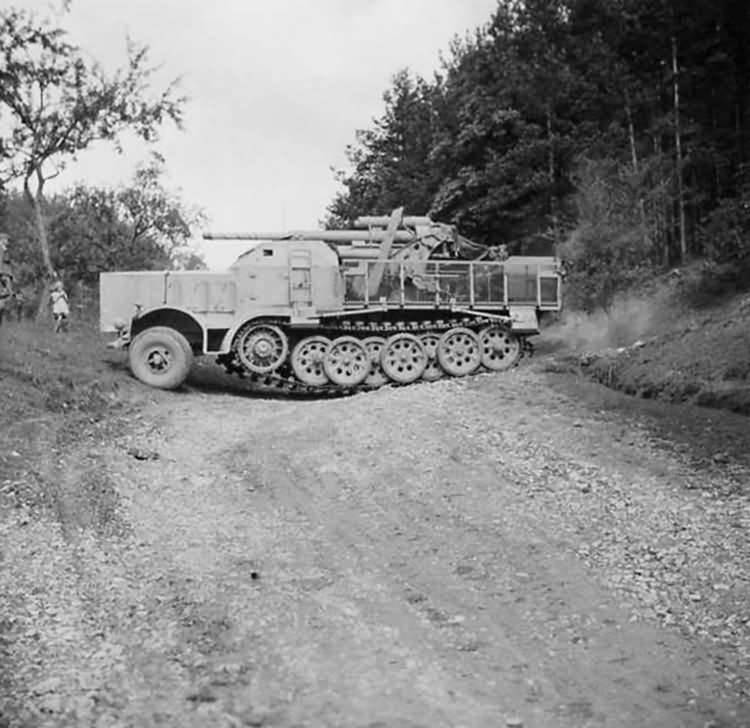 It was possible to find a way out of a difficult situation using the X.UMX-ton heavy artillery tractor s.Zgkw.18t as a chassis for the installation of an anti-aircraft gun. The undercarriage of this tractor was semi-tracked: the front wheels of the car were guides, and the tracked chassis (on 18 road wheels on board, staggered) had a torsion bar suspension. Each caterpillar consisted of 6 links, and the length of the contact surface of the caterpillar with the surface was equal to 47, see. The total mass of the combat vehicle when installing anti-aircraft guns reached 286 tons. With an 25 horsepower 12 cylinder mounted on a tractor. The speed of the installation on the highway was 230 km / h (35 km / h is the highest), over rough terrain - 50 km / h. The supply of fuel in the amount of 20 liters was enough for 290 km of traffic on the road or 250 km when driving along a country road.

The power plant and the cabin of the tractor received armor, and the cargo compartment received a folding side. The maximum thickness of the armor plates was 14,5 mm. An interesting feature of the car was that instead of the usual grilles or blinds, the radiator protected the corner from armor plates, which gave free access to air from below and above. Record was the number of crew of the vehicle, which included 11 people: driver, commander and 9 gunners calculation.

Anti-aircraft gun 8.8 cm Flak 37 was installed in the back and equipped with armor. When firing at air targets, the firing rate of the gun reached 15-20 shots per minute. The maximum height reach for the anti-aircraft grenade was 10 600 meters, and the effective reach was 6000 meters. A distinctive feature of the gun was the high speed of the projectile - about 800 m / s. Three main types of ammunition were used for firing: a fragmentation grenade with a screw bottom 8,8cm Spz.Gr L / 4,5 (could be equipped with three types of remote fuses, a defeat area - a cylinder 60х12 meters), a solid-shell fragmentation grenade (also three types of fuses) and an armor fragmentation grenade (also three types of fuses) and an armor set and armor’s and a figure and an armor’s complex and armor; .Gr. With all its advantages, this anti-aircraft gun had its drawbacks. The maximum rate of fire could be achieved only in favorable conditions, and taking into account only manual aiming at the target and poor booking, in open battle with the enemy this self-propelled gun had not so many chances to survive. 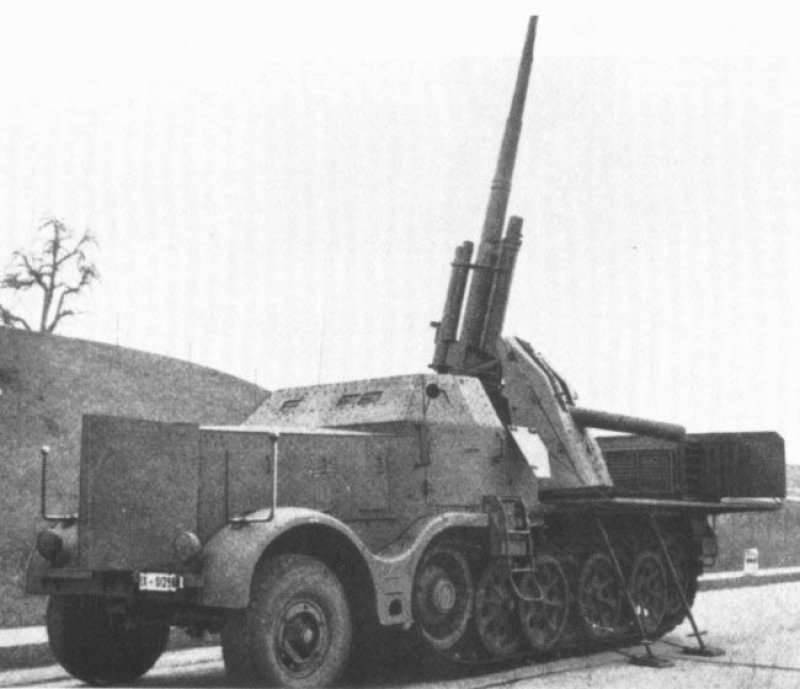 Work on this anti-aircraft self-propelled unit, which received the official designation 8.8cm Flak 37 Sfl.Auf 18 ton Zgkw, began in the 1941 year, but only on October 31 1942, the first prototype ZSU was presented for testing to the customer. The self-propelled unit was tested with varying success, after which the Luftwaffe and the Wehrmacht placed an order for the production of 112 copies. But in the course of serial production from July to September, 1943 managed to collect all 12 of such machines (according to other data there were 14, however, in this case, most likely, the prototypes collected earlier were also taken into account). All self-propelled anti-aircraft installations assembled by the Germans were transferred to the 1 and 2 batteries of the 304 battalion of heavy anti-aircraft artillery. In September, 1943, this part was subordinated to the 26 Panzer Division, which conducted military operations against the allies in Italy.

Do not confuse the ZSU 8.8cm Flak 37 Sfl.Auf 18 ton Zgkw with another combat vehicle, also built on the basis of the half-track tractor. This is 8.8 cm Flak 18 (Sfl.) Auf Zugkraftwagen 12t (Sd.Kfz. 8). This model was originally built as an ACS, whose main task was to be a struggle against the enemy’s long-term fortifications and its armored vehicles. The base for this self-propelled unit was used 12-ton semi-tracked tractor Sd.Kfz.8, which was produced by Daimler-Benz with 1937 year. These tractors had the brand designation DB s8, DB9 and DB10, depending on the year of manufacture and the level of design modifications.

Successful this combat vehicle was difficult to call. Her booking was too weak, and the scheme impractical. In addition, the total height of this self-propelled gun, together with an armored scroll of the gun, reached 3225 mm, which made such an important parameter, as inconspicuous, completely inapplicable to it. Despite a set of these shortcomings, the 88-mm self-propelled unit was adopted by the Wehrmacht as a temporary measure. According to various reports, Krupp in 1939-1940 has released 10 or 12 of such ACS based on the chassis DBs8 and DB9, although in some sources there is a figure in 25 self-propelled guns. Initially, all the ACS were transferred to the 8-th separate heavy division. 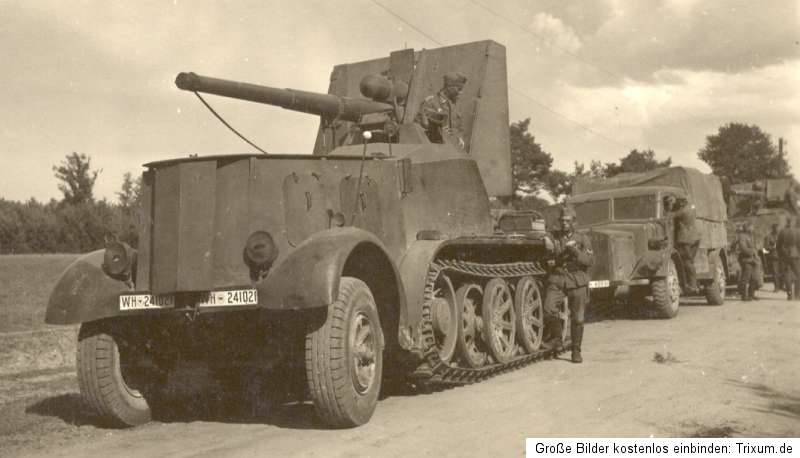 In the spring of 1940, this division was attached to the 2 tank division, which was part of the 19 corps. General Heinz Gudarin commanded this corps. Self-propelled gun showed itself very well in France. The first experience of its combat use was successful. In the afternoon of May 13, 1940 was used by ACS data to combat the enemy’s long-term gun emplacements on the Meuse River. 88-mm anti-aircraft guns successfully coped with their task, several projectiles drove the calculations directly into the embrasures of the firing points, forcing the French soldiers to surrender in this area. Self-propelled guns went through the entire campaign, successfully applied to combat French tanks. Later they took part in the invasion of the Soviet Union. The last of the SAU of this type were lost by the Germans in the USSR only in March 1943 of the year.

All attempts to install the excellent Flak 88 / 18 / 36 37 anti-aircraft gun on the half-track tractor chassis were a kind of half-measure, a kind of ersatz of a real combat vehicle. And although such a decision increased the mobility of the remarkable universal implement, the tractor chassis simply were not designed for its mass. It was a fairly heavy artillery system weighing over 5 tons. Understanding this, the German designers tried to create a specialized tracked chassis that would fit to install an 88-mm anti-aircraft gun.

In 1942, Krupp engineers began to design a new undercarriage for an ACS, which, according to the scheme, should have been close to the undercarriage of an average Pz.Kpfw.V. Applied to a single board, it consisted of 8 road wheels, which were staggered, with rear guide and front drive wheels. The track chain was assembled from steel tracks with 520 mm width. The body of this universal ACS, which could be used both in anti-aircraft and anti-tank purposes, was very similar in layout and design to the medium tank Pz.Kpfw.IV. In front of it there was a transmission, in the middle part there was a fighting compartment, and in the stern - the engine compartment. A modified Flak 18 / 36 anti-aircraft gun with caliber length 56 was mounted on the roof of the fighting compartment. This tool was protected by means of a front armored seat and two side and aft armored seats. The peculiarity of this combat vehicle was that in the combat position the side and stern armored seats folded back, forming a level platform for calculating work. In addition, the folding of the armored shell allowed the gun to make a full turn around its axis, which was very important, especially when using the Pz.Kpfw.IV as a self-propelled anti-aircraft gun. 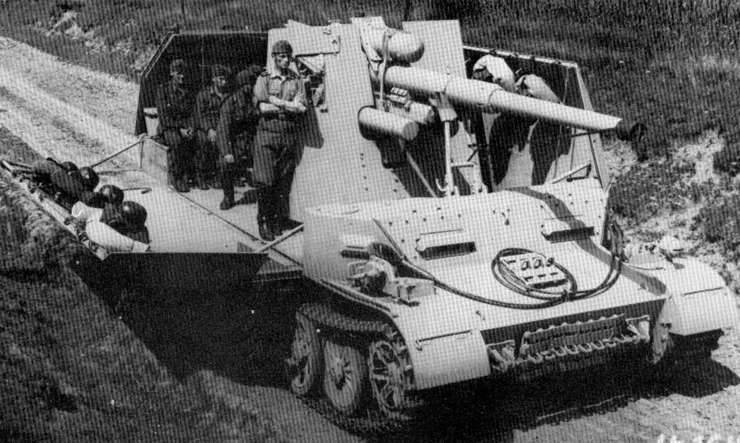 Created by the designers of the Krupp company, the chassis was designated Pz.Sf.IVc, and the self-propelled gun was officially named Versuchsflakwagen 8.8cm FlaK auf Sonderfahrgestell. A prototype of this universal ACS was put to the test at the end of 1942, where it showed quite good results. Despite this, the order for the serial production of this combat vehicle did not follow. The reason was the change in the technical specifications, over time the Flak 18 / 36 anti-aircraft gun ceased to have the necessary anti-tank effectiveness. According to some information, the prototype of this SAU even managed to make war in Italy, being assigned to the 26-th tank division. Work on fine-tuning the prototype of this combat vehicle did not stop in Germany until January 1945. As part of the upgrade, a new Flak 41 anti-aircraft gun of the same caliber, which has a large caliber and the best ballistics, was installed on the prototype.

During the pilot work on the project, the self-propelled guns tried to regain an exclusively anti-aircraft role, equipping it with a fast-firing 37-mm anti-aircraft gun. In addition, the chassis Pz.Sf.IVc was proposed to be used as a weapon transport. According to the project, it was planned to place an XFUMX-mm howitzer leFH105 on it, which would fall to the ground when fired, along with the turret. In addition, the PT-SAU (Panzerjaeger IV mit 43cm Pak 8.8) and ZSU projects were created on the upgraded version of the Gerät 43 chassis, which were planned to be equipped with the 042-mm cannon FlaK 88. However, in practice, all the proposed options for combat vehicles were rejected by the technical committee. 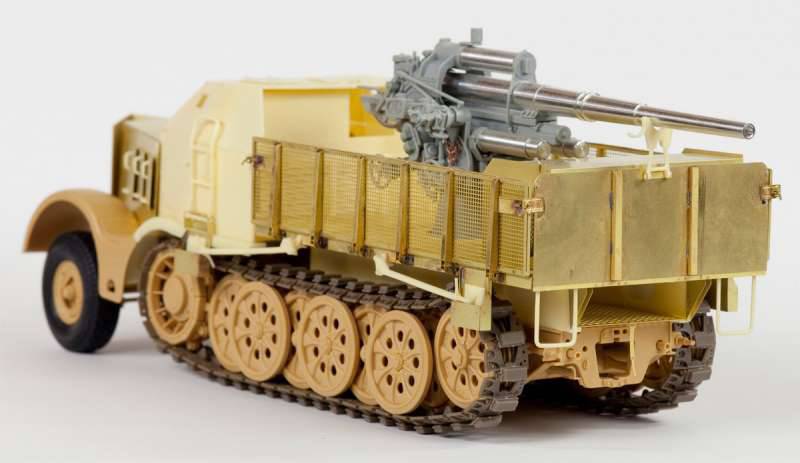 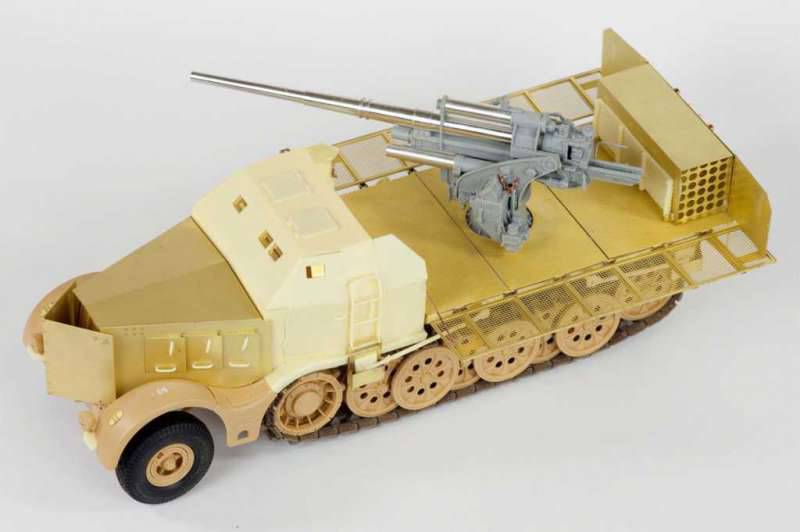 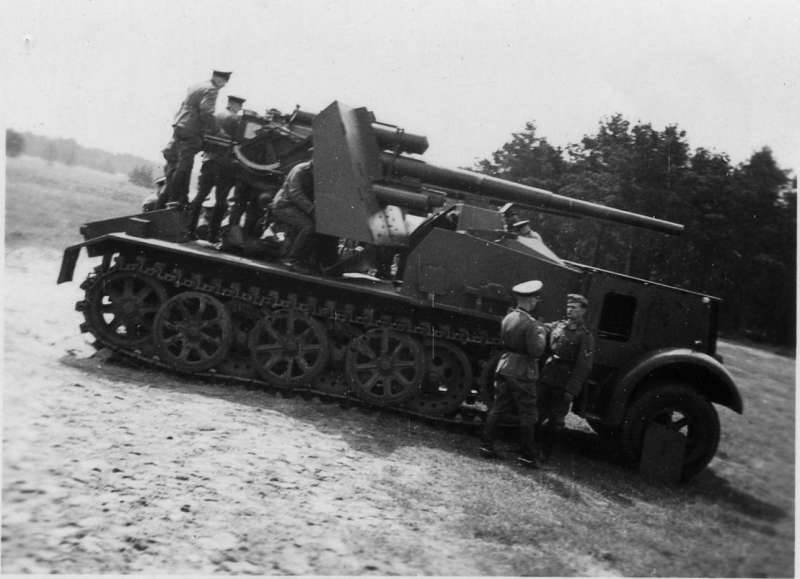 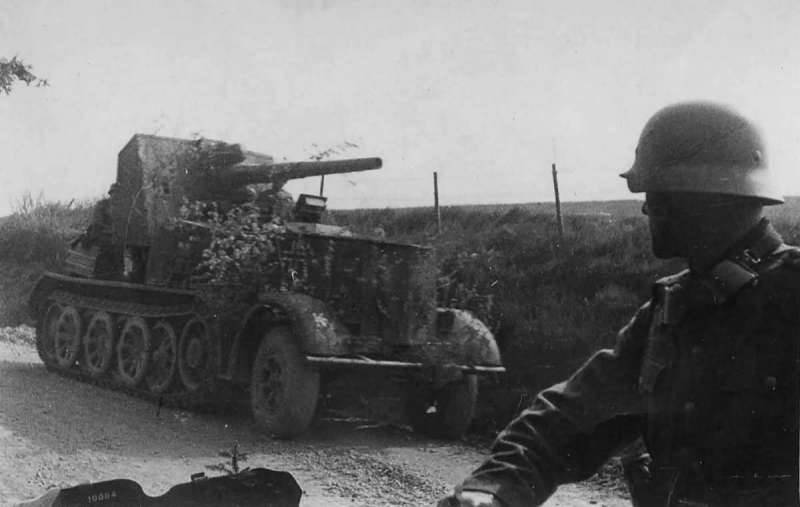 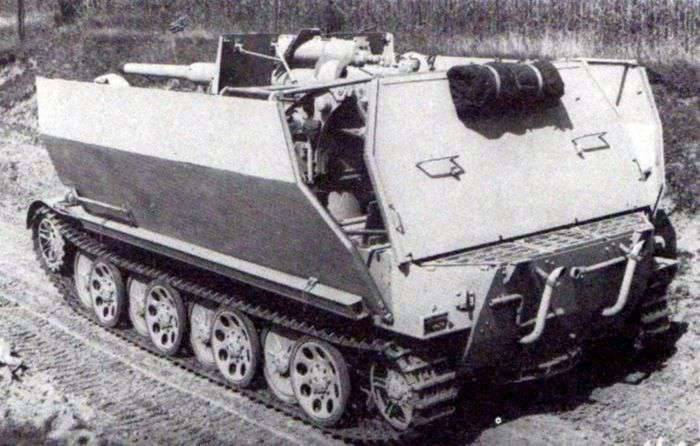 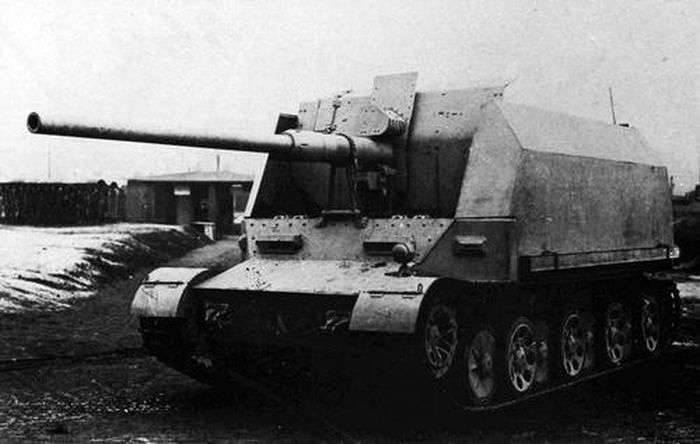 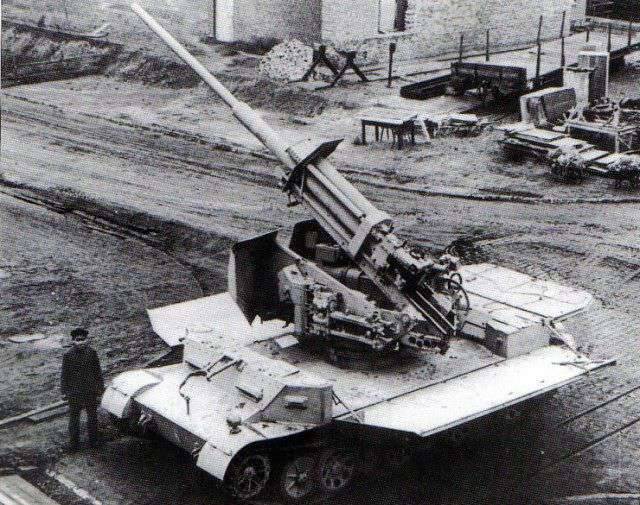