Is escalation of violence in Donbas inevitable?

February 26 2016
55
For the fourth day in a row, the words about the mythical “truce” cause only uncontrolled sarcastic laughter among residents of the Donetsk People's Republic. Because the fighting flare up with unprecedented intensity over the past six months. In general, the situation is reminiscent of the horrors of February 2015, but there are a number of key differences that may turn out to be fateful. 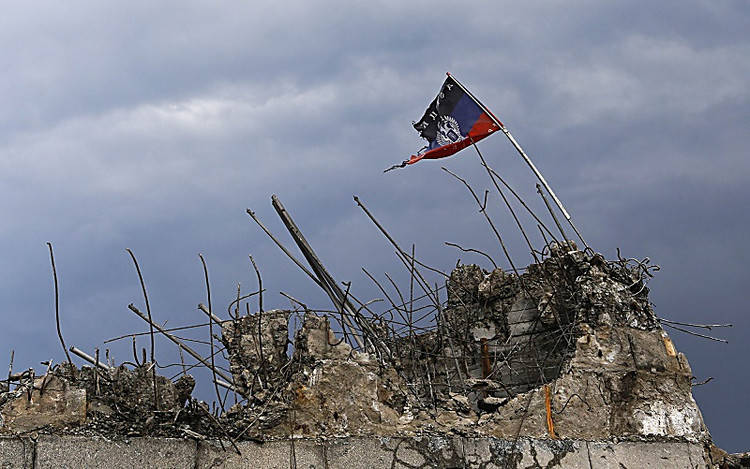 The enemy tightly attacks the positions of the militia in several directions at once. The most tense situation is on the western outskirts of Donetsk, where the village of Staromikhailovka, located on the very line of demarcation, near the occupied by Kiev security forces of Krasnogorovka and Marinka, falls daily under fire. The situation in Staromikhailovka is close to catastrophic, as the punitive shells fall in close proximity to residential buildings; residential buildings are crumbling daily, and only by a miracle is it possible to avoid human sacrifice.

The situation is equally tense in the southern direction, where parts of the APU once again occupied the village of Shyrokyne located in the buffer zone and should remain demilitarized, as soon as we carefully read the Minsk agreements ignored by the enemy.

In a similar way, the Ukrainian Armed Forces occupied a holiday village in the vicinity of Avdiivka. It should be noted that this territory has always remained neutral, and the militia positions were not there. However, while narrating about the seizure of the village, the punishers added a story about fighting with the mythical “seventh regiment from Kabardino-Balkaria” to heighten the main narrative thread. Before that, the guys want to somehow tell about the “Russian aggression” that they are even ready to pronounce the name of the Kabardino-Balkarian Republic, which is difficult for their level of development, just not to admit to the inglorious gangster seizure of the neutral zone.

However, laughter is laughter, and such maneuvers of the enemy troops clearly indicate the desire to move to full-scale offensive actions soon. And the constant shelling is aimed primarily at finding the weakest and most vulnerable areas in the defense of the Donbass defense army.

Well, now about the key difference between this escalation of the conflict and the one last year that was announced at the beginning of the article. I don’t know whether the professional skills of the Ukrainian army have increased over the year, whether certain changes have taken place in the moral and ethical sense, or whether this is just a coincidence, but the fact remains: the enemy has ceased to systematically and deliberately bombard social objects. And precisely in this lies the secret of its possible success. At first glance, this is an absurd and paradoxical conclusion. But now I will try to justify it.

It so happened that the current aggravation of the situation at the fronts was felt by far from all the citizens of the Republic. Residents of front-line settlements and areas live in constant fear, this is understandable. Artillery duels, coupled with the unrelenting fire of small weapons became a familiar cacophony for residents of the long-suffering Gorlovka, Petrovsky, Kievsky, part of Kirovsky and Kuibyshevsky districts of Donetsk. Not to mention the villages adjacent to Donetsk. But frank crimes against humanity, massacres, such as those that took place in January-February last year, are not observed now.

Punishers have bothered to stop shooting at crowds of people. Now there is no fire on the lines waiting for the release of humanitarian aid. Now neither intercity regular buses, nor trolley buses are under fire. Now, whole blocks of large cities under the control of the Armed Forces of Ukraine are not subjected to heavy fire from the Gradov in order to blame the militia. Nowadays, there are practically no targeted artillery hits in residential buildings. In any case, if you believe the official reports of Edward Basurin.

And therefore, many people tend to mistakenly believe that the truce is being observed, drawing in his head illusory pictures of the peaceful sky above his head. Indeed, the center of Donetsk has already forgotten what life is under shelling, and how important it is not to lose vigilance for a moment. Now the enemy’s fire has concentrated mainly on the outskirts, and it’s mostly not civilians who suffer from shelling, but the Donbas army soldiers themselves, who are forced to endure shelling silently, since in most cases the command prohibits opening fire. And if so, then many Donetsk residents can look at this situation through their fingers, they say, well, think about it, shoot at the military, so they and the military knew what they were going for.

Such a strange escalation is happening now. Everyone understands that the aggravation seems to have happened, and it seems to be very close, but everyone deep down hopes that this will not affect him, and continues to live a normal life.

But last February everything was different. Then no one doubted the need to continue fighting to close the Debaltsevsky boiler to push the enemy from the line to win. And the army of the DPR and the LPR had no choice but to conduct a joint operation in Debaltseve and put the Ukrainian army in the position of zugzwang, from which only the Minsk-2 saved it. And now the leadership does not say anything about the possibility of a large-scale counter-offensive, and the word “Novorossiya” is becoming less and less like in the reports of the official media and in the lexicon of government officials.

Ctrl Enter
Noticed oshЫbku Highlight text and press. Ctrl + Enter
We are
The head of the DPR visited Gorlovka, the cadets took the oath, and in the "Olympic" hosted the forum "Donetsk Republic"Artillery of the Korean People’s Army. Part of 3. Reactive systems
55 comments
Information
Dear reader, to leave comments on the publication, you must to register.