American generals against truce in Syria

February 26 2016
30
The joint statement by the presidents of Russia and the United States, Vladimir Putin and Barack Obama, about the armistice in Syria, which sounded on Tuesday night, was frankly unexpected for the world community. Recently, rumors about a ground force operation of military formations from the countries of the American coalition have been actively roaming. They wanted to support the forces opposing President Bashar al-Assad and even turn the tide of the war in their favor. Now here is what the French say is camouflage. 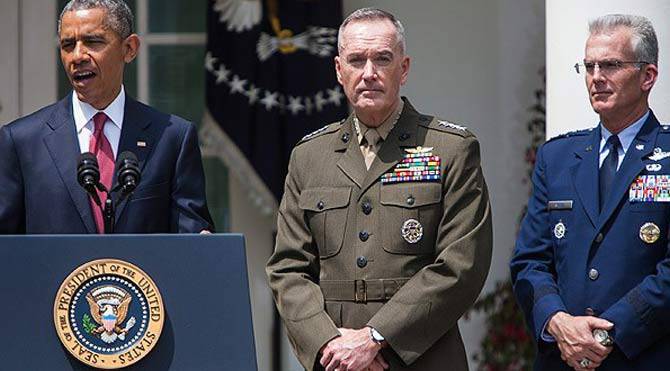 A political decision provoked a demarche of security officials

The presidents agreed on 27 February with 00: 00 hours Damascus time to stop fighting in Syria between government forces and the opposition. The truce has been announced for two weeks. During this time, Russia and the United States must convince the parties to the conflict to stop the civil war, and look for a way out of the crisis exclusively at the negotiating table. On news the UN Secretary General Ban Ki-moon responded vividly. On behalf of the organization, he said: "We are all very encouraged by the fact that the two important co-chairs, Russia and the United States, were able to come to such an agreement, now it is necessary to ensure that all others adhere to them as well."

Federica Mogherini, head of EU diplomacy, called the announcement of a truce in Syria as good news and a step in the right direction. She noted: “The agreement is fully in line with the decision taken by the MGPS last week in Munich.” In the United States itself, the results of the closed multi-day talks on Syria were called the “bells of hope”. White House spokesman Joshua Ernest assessed the prospects for an armistice agreement as follows: “For several years we have been trying to reach a diplomatic solution to the problems tormenting Syria, and now is the moment of opportunity to succeed.” The Syrian government, Kurdish leaders, and representatives of the Saudi-controlled Supreme Committee for the Negotiations (HCP) of the Syrian opposition spoke about readiness for a truce.

Against this background, in Forbes and The Wall Street Journal, reports about disagreements between representatives of the defense and diplomatic departments of the United States sounded a sharp dissonance. According to these publications, at a meeting with Barack Obama, prior to the joint statement of the presidents of the two countries, Pentagon chief Ashton Carter, chairman of the Joint Chiefs of Staff of the United States, General Joseph Dunford and CIA Director John Brennan spoke in favor of strengthening the support for the rebels.

After the political decision on the truce was still made, the leaders of the Pentagon and the CIA demanded that a “plan B” be prepared in case of a breakdown of the cease-fire in Syria. They promised to "create serious trouble for Russia." As the reviewers of these publications write, the pressure on Obama of the hawks alliance from the defense departments can force the American president to correct his position and take more stringent measures against Moscow.

The Syrian opposition led by the CIA responded to the demarche of the American security forces, which leaked to the local press. Separate groups have already announced that they will observe a ceasefire regime depending on the cessation of the blows of government forces against the Dzhebhat an Nusra detachments. It should be recalled: the group, which is now being baked by the opposition, is recognized as terrorist in the world. On this account there is a formal UN decision.

When the retinue does not celebrate the king

Observers linked the statements of the heads of law enforcement agencies with the completion of the term of office of Barack Obama. In America, the outgoing president is usually called the “lame duck”. The partners are already less listening to his wishes, and the prospects for interstate relations are reconciled by electoral speeches of new potential owners of the Washington White House. The presidential team is becoming less disciplined, concerned about its future career.

It always has been. They are used to it. Only Barack Obama "limped" for a long time. This was publicly shown in the fall of 2014. Then at the G20 summit in Brisbane, Australia, he agreed to put the Ebola fever and the “aggressive policy of Russia” in the same ranks of world threats. Later, Foreign Minister Sergei Lavrov, responding to the questions of State Duma deputies as part of the government hour, commented on the statements of the American President: “I paid attention to listing the threats that President Obama allowed himself, starting with his speech at the UN General Assembly. Subsequently, not so long ago, talking with John Kerry, I asked him what it meant. He told me: "Do not pay attention."

That fall Kerry often met with Lavrov. They discussed the Iranian nuclear program and the situation on the Korean Peninsula. Counting on the support of the Russian minister in resolving these problems, Kerry sacrificed his own president as a chess player with a pawn. Commentators then agreed that the US Secretary of State could allow such a scornful attitude to the words of the head of state solely because of their origin and social status.

John Forbes Kerry truly belongs to one of America’s wealthiest and most influential families. This explanation is all satisfied. Meanwhile, John Kerry, in his first election campaign, actively supported Obama, counting on the post of vice-president of the United States, but here he was bypassed by Joseph Biden. Then Kerry tried to lead the State Department, but even then he failed - Hilary Clinton took the position. So John Kerry from the Forbes family in general was left behind the presidential team. In the light of these failures, it would not be worthwhile to make him a senior uncle - the curator of the president, who can afford liberties that are inaccessible to others.

Moreover, Obama did not intend to take John Kerry for his second term. This time, Susan Rice, who had previously been the US Permanent Representative to the UN Security Council, was seen as Secretary of State. Rice stumbled over Congress. At the hearing, her candidacy had unpleasant questions about the war in Libya, the death of the American ambassador to Benghazi. Congressmen considered Susan Rice responsible for the Libyan failures and refused to trust her. It was only then that the candidacy of the veteran of the Democratic Party and the Vietnam War, John Forbes Kerry, emerged for the post of US Secretary of State.

By the way, the case of Susan Rice was, perhaps, the first bell that the foreign policy of the United States could be formed beyond the wishes of the head of state. A long investigation into the Libyan events led the Washington political club to the conviction that the death of the ambassador to Benghazi and other tragic failures were the result of adventurous decisions, the authorship of which was firmly entrenched in the "Clinton gang".

As written by the Washington Post, contrary to the recommendations of the then Secretary of Defense Robert Gates, the influential female trio in the person of Hillary Clinton, Susan Rice and Samantha Power insisted on the expediency of the bombing of Libya and convinced Barack Obama to make such a decision. They also took over the main management of the displacement of Muammar Gaddafi. The tragic consequences of this policy are well known.

Obama managed to distance himself from them, but this only strengthened the view that the president’s foreign policy decisions can be manipulated or even ignored. And not only the president. Known independent role in the Ukrainian crisis, Assistant Secretary of State for European and Eurasian Affairs Victoria Nuland.

The news site AgoraVox wrote about it: “The fact that Nuland created in Ukraine was recognized as“ the most brazen state coup in the stories". She established a neo-Nazi government in the country. ” The general public Nuland remembered with buns on the Maidan and a selective mat to the European Union.

Devoted people know that Victoria Nuland is in the close circle of Hillary Clinton and without due veneration relates to her immediate superior, Secretary of State Kerry, and to President Obama, allowing herself to freely interpret their statements and decisions. Nuland showed independence not only in Ukraine. Not so long ago, behind the back of her patron, she tried to meet with Russian President Vladimir Putin, but was awarded only a conversation with his assistant.

The meeting made a lot of noise in political circles, but had no practical results and real consequences. But once again she showed: under President Obama, the once authoritative and highly professional diplomacy of the United States began to sin with amateurish improvisations, sometimes reminiscent of a political "walking-field".

Noted on it and US Secretary of Defense Ashton Carter. Recently, contrary to official statements by President Obama, Carter publicly supported the plans of Turkey and Saudi Arabia, aimed at the invasion of their military formations into the territory of Syria. Not surprisingly, the Pentagon now essentially obstructed the Syrian initiative of the US foreign ministry and even the president.

... It is possible with irony to treat diplomatic freedom in the current US administration. More often it brings more harm to the United States itself. However, this cannot be said about the concerted actions of the heads of security agencies who arranged the demarche to the president. Here they represent a real threat - both to the truce that is outlined in Syria, and to the world as a whole ...

Ctrl Enter
Noticed oshЫbku Highlight text and press. Ctrl + Enter
We are
The outgoing UN secretary general attended to the health of terroristsSlippery Ban Ki Moon
30 comments
Information
Dear reader, to leave comments on the publication, you must to register.