Saakashvili was going to campaign ...

February 26 2016
30
When former Georgian President Saakashvili became the head of the Odessa region and a figure on the political field of the Bandera Krajina, Nino Burjanadzhe responded with a sarcastic comment from Georgia: Ukraine will pay dearly for this invitation to Saakashvili to participate in the country's political life. It seems that the time to pay the bills of the wanted person in Saakashvili’s homeland for President Poroshenko has come. 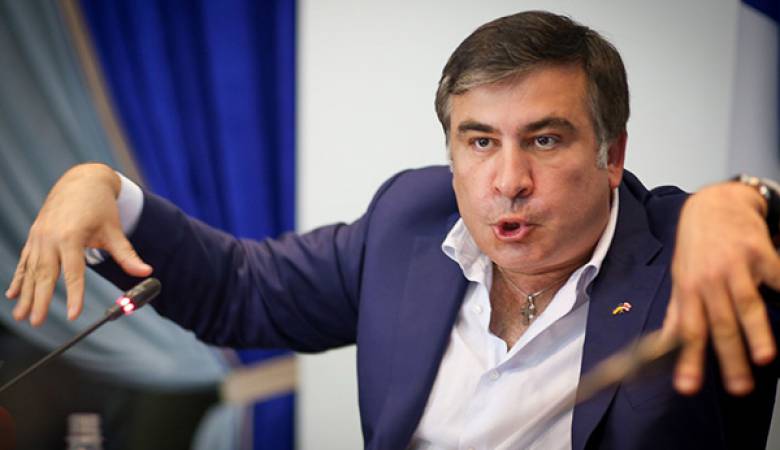 The wonderful demagogic Georgian led the fight against corruption and the government of Yatsenyuk in Ukraine, then threw the thesis on the “oligarchic coup” to the masses. And got a good result: his personal rating, according to opinion polls, is growing. Some political forces like “Self-help” are considering his candidacy for the post of prime minister after Yatsenyuk’s resignation. Mustafa Nayem, the main catalyst of Euromaidan, asks Saakashvili to clarify his position in the light of new political demands in society ...

Poroshenko needs to be understood now: who really is behind Saakashvili: is Ambassador Jeffrey Payette still there, or is she no longer Payette? Because it was Payette who organized the “oligarchic coup”, banning deputies under his control to vote against Yatsenyuk. At the same time, the “oligarchic coup” that preserved Yatsenyuk’s premiership greatly strengthened Saakashvili’s political position as the main fighter against corruption and personally Yatsenyuk. At the same time, we remember that Saakashvili arrived in Ukraine from Washington and is his special representative ...

Yes, you will not envy Zits-President Poroshenko, because he is exactly “Zits” ... In fact, he hides and waits for how events will unfold. On good terms, Yatsenyuk must be urgently removed as a fully played card, a source of negativity for all the authorities, but Washington insists that the government tandem cannot be touched and threatens the instability of IMF loans. The third Maidan showed that as a result, the political situation in the country has hung up, like an overloaded computer.

It was a demonstration of the power capabilities of the Bandera "Nazi-patriots". Poroshenko, in response, condemned the Third Maidan as a "provocation of Russian propaganda." That is, the parties recorded an irreconcilable contradiction, but did not clarify the relations on the street. Therefore, the struggle will move to the parliament. However, there is one important result: the radical neo-Nazi opposition was legalized.

Parliamentary leaders have withdrawn from the Third Maidan, and Saakashvili, too, but his slogans are their slogans ... Sociological services speak about the growing sympathy of the population towards the Nazis, in view of the disastrous economic situation, and the parliamentarians react to it.

The main slogan of the street and the Third Maidan: "Politicians betrayed the ideals of Maidan." The Rada is declared Zrada, but it is important who heads the list of traitors. This Yatsenyuk and Poroshenko joined him. And who is opposed to traitors? Announce the entire list.

The party of power, headed by Poroshenko, includes, conditionally, Yatsenyuk, Avakov (MVD plus Azov), Turchinov, Poltorak (VSU) and Gritsak (SBU). Saakashvili with a special opinion about Poroshenko, the Timoshenko-Nalyvaichenko tandem (ex-head of the SBU), “Self-help” of Lviv mayor of Garden, Dmytro Yarosh with a part of Right Sector battalions, and the Right Sector proper fall into the opposition.

Moreover, Poroshenko is in the position of Yanukovych, at any moment anyone, especially Yatsenyuk, can betray him, just as Yanukovych betrayed his right hand Lyovochkin in his time. And Saakashvili betrayed Shevardnadze in his time, and he was already seen in compromising connections with Abromavicius, who had inflicted a sneaky blow on Prosecutor General Shokin, who’s the godfather Poroshenko. Generally, Abromavicius, with whom the government crisis began, is a very dark warrior figure who met before the scandal of his name ... again with Ambassador Payette!

What's going on in Kiev? All the warring, publicly and in the covert, the figures are in touch with the American ambassador Payette, or even with Washington. The right hand of Washington, for example, Saakashvili, demands: “This government shantrop must be set aside,” and his left hand is this same “shantrapa” - Yatsenyuk, who recently received a blessing on an American aircraft carrier (!), And with the help of Ambassador Payett made “oligarchic coup. "

In fact, this is not Kiev schizophrenia, it is the usual practice of Washington in the colonial and NATO countries. Likewise, Washington is supporting today with one hand Turkish Erdogan and the other with opposing Syrian Kurds, and they are fighting against each other to the glory of America. It seems that this conflict will happen again soon in Ukraine, with the exacerbation of the government crisis. Apparently, “Right Sector” Yarosh will clash with Avakov’s “Azov” in order to avenge the murders of Muzychko and Forester in the same way. On the Third Maidan, they have already noted a fight. The Security Service of Ukraine and the GPU, the Ministry of Internal Affairs and the Armed Forces of Ukraine, remembering the tragic fate of the “Berkut”, can split and move aside. Until the winner is determined.

In general, Saakashvili said that what is happening - this is only the beginning of the crisis, and he clearly intends to lead and use it. He has experience of a similar crisis in Georgia. "My ambitions are rooting the new rules of the game, this is a new political elite at the head of the government of Ukraine." Mishiko claims that “he gathered a lot of promising young people. These people united in one rush: to change everything in the country. ”

“This is not a party, this is a movement, like Solidarity in Poland. Our main task now is to move the ruling elite so that it gives place to new people, ”says Saakashvili and makes Poroshenko a“ k ”: he declares him a“ highest level politician ”. If we drop this “ku”, then, given the above, Saakashvili is aiming for the role of Hitler’s Bandera. One question remains: will the Bandera masses accept such a Fuhrer?

Ctrl Enter
Noticed oshЫbku Highlight text and press. Ctrl + Enter
We are
Ukraine changed the government. What to expect from the Groysman cabinet and what does Saakashvili have to do with it?Prime passion. Who will replace Yatsenyuk as prime minister of Ukraine?
30 comments
Information
Dear reader, to leave comments on the publication, you must to register.