February 26 2016
8
At the beginning of the year, the Stockholm Peace Research Institute (SIPRI) traditionally begins to publish its new reports. Over the next few months, institute experts will announce the results of a series of studies on the international market for armaments and military equipment. The first SIPRI report on the arms market this year was 22 February. Its theme was market conditions in 2011-15. Swedish analysts reviewed the performance of this period and compared it with the previous five-year plan, which occurred in the 2006-10 years. Consider a new report.

As always, the main points of the report are listed in a brief press release accompanying its publication. In addition, the main trends are put in the headline of the press release. This time, at the headline level, there was an increase in arms purchases by countries in Asia and the Middle East, as well as the continued leadership of the United States and Russia in the export of military products. In addition to these trends, the report reveals some other interesting processes in the international market.

According to SIPRI specialists, in the 2011-15 years the size of the arms market grew by 14% in comparison with the previous five-year period. Market growth continues from the year 2004 and does not stop yet. It should be noted that the market indicators change every year, but when considering the volume of purchases over five-year periods, the situation looks a little different. 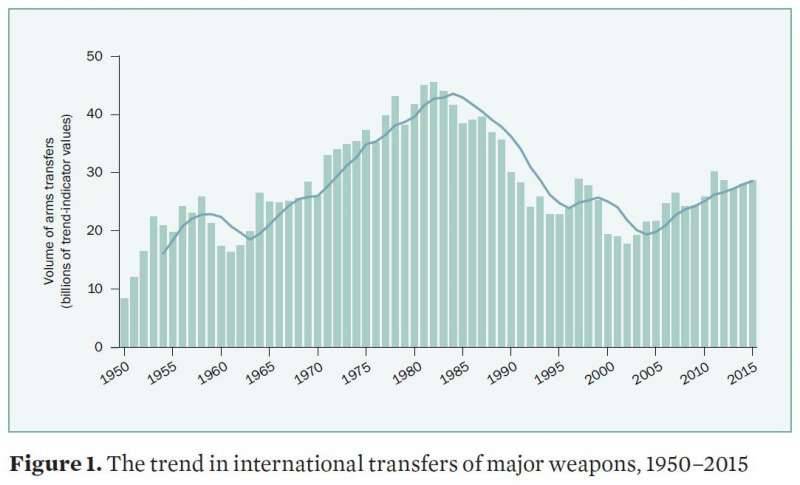 General market performance over the past few decades

It is noted that in the past five years, the growth of imports of military products was provided mainly by the countries of Asia and Oceania. The list of the ten largest importers includes six countries in this region: India (14% of total world procurement), China (4,7%), Australia (3,6%), Pakistan (3,3%), Vietnam (2,9%) and South Korea (2,6 %). At the same time there are records. So, Vietnam for five years has increased imports by 699% in comparison with the previous period. In general, the figures for Asia and Oceania look much more modest: the total imports of the region grew by only 26%. Simultaneously, Asia and Oceania accounted for 46% of all purchases in 2011-15.

Quite good indicators of growth in purchases are demonstrated by the countries of the Middle East. Over the last five years, this region has shown an 61-percent increase in purchases. The main factor leading to such results was the increase in purchases of Saudi Arabia. For five years, the cost of this country increased by 275%, which made it the world's second-largest importer of weapons. Qatar increased spending by 279%, however, the total volume of contracts left this country far beyond the dozens of import leaders. Egypt and the United Arab Emirates increased their purchases by 37% and 35%, respectively.

As before, the United States remained in the first place among exporters of weapons and military equipment. In 2011-15, their deliveries accounted for 33% of the international market. Growth compared with the previous period amounted to 27%. Russia ranks second and 25% of the market, increasing supply by 28%. It is noted that in the 2014-15 years, Russian shipments decreased to the level of the end of the last decade.

A remarkable increase in exports shows China, which managed to increase its order book by 88%. Among other things, this led to a change in the position of other countries in the overall ranking. For example, France and Germany lost their places, who also showed a reduction in key indicators. Thus, French exports fell by 9,8%, while German fell by almost half.

Also, analysts SIPRI in a press release noted some other interesting features of the market situation, observed in the past five years. For example, African indicators are of interest. In 2011-15, imports from African countries grew by 19%, with 56% of all shipments accounting for only two countries: Algeria and Morocco. One of the reasons for this situation with the disproportionate ratio of purchases of different countries may be the economic situation on the continent. Due to the lack of funding, the countries of Central and South Africa are not able to buy a sufficient amount of weapons or equipment.

Mexico, Azerbaijan and Iraq showed good growth in imports - in 2011-15, their purchases increased by 331%, 217% and 83%, respectively. At the same time, the total imports of European countries decreased by 41%.

In recent years, the situation on the international arms and equipment market, namely, the list of export leaders, has not changed much. Countries rarely move more than one line up or down, but this time there are major changes in the top ten. For example, in the 2011-15 years, Germany fell from third place to fifth, and France retained fourth place, but missed China ahead. Consider the list of leaders in more detail. 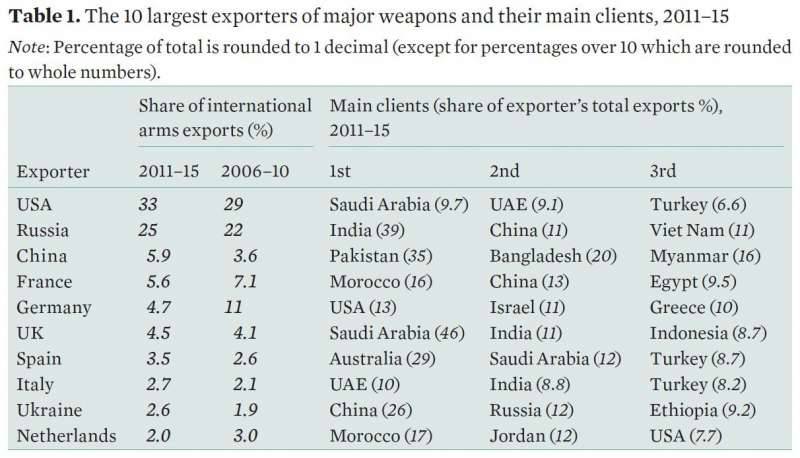 In the first place in terms of the volume of the world market, the United States again remained with a share in 33%. In the 2006-10 years, the United States occupied the 29% of the market and showed growth in both absolute and relative terms. In the last five-year period, most of the American products went to Saudi Arabia (9,7% of all deliveries), the United Arab Emirates (9,1%) and Turkey (6,6%).

Silver is again in Russia, which has increased its market share from 22% to 25%. A characteristic feature of Russian arms exports in the 2011-15 years was the decline in supply volumes observed since 2014. Nevertheless, this did not prevent the Russian industry from maintaining and increasing the occupied part of the market. The overwhelming majority of Russian products (39%) in 2011-15 went to India. China and Vietnam ranked second and third in terms of procurement with 11% of deliveries.

The third in the list of exporting countries is China. At the end of the last decade, he occupied only 3,6% of the world market, and now he supplies 5,9%. The growth in orders amounted to 88%, which was a record for the period under review. The growth shown not so long ago allowed China to overtake the UK, France and Germany. Most of China’s military exports go to three countries: Pakistan (35%), Bangladesh (20%) and Myanmar (16%).

Fourth place on the leaderboard was reserved by France, whose share, however, fell from 7,1% to 5,6%, and sales fell by 9,8%. Thus, only the changes in the indicators of other countries allowed her to keep the fourth line. Main buyer of french weapons Morocco became the 2011-15 (16%), the second and third were China (13%) and Egypt (9,5%).

The top five closes Germany, which has set an anti-record of the new rating. In the last "five-year" period, it showed the largest decline in exports - 51%. Because of this, the market share of German weapons fell from 11% to 4,7%. The bulk of German products in the period under review were sent to the United States (13%), Israel (11%) and Greece (10%).

The growth of the market is primarily associated with the capabilities of importers. It is their desire to spend money on new weapons and equipment leads to an increase in overall market performance. In 2011-15, India (14% of total imports), Saudi Arabia (7%), China (4,7%), UAE (4,6%), Australia (3,6%), Turkey (3,4% ), Pakistan (3,3%), Vietnam (2,9%), USA (2,9%) and South Korea (2,6%). It is noteworthy that the top ten importers account for only 49% of all deliveries. In addition, a dozen leaders over the past five years has undergone the most serious changes. Some countries dropped out of it, and other states took their places. 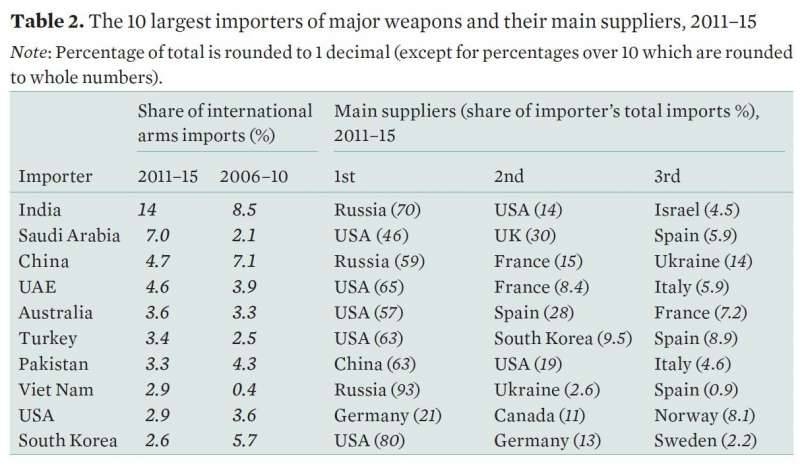 Major importers and their suppliers

The largest importer was India, which accounted for 14% of global supply. For comparison, in the 2006-10 years, the Indian military left behind only 8,5% of purchases. Russia remains the main supplier of weapons and equipment for India (70%). In the second and third place were the United States (14%) and Israel (4,5%).

The second place among importers this time was Saudi Arabia with 7% of world purchases. She also showed a high increase in military spending, starting with 2,1% in 2006-10. The three major arms suppliers for this country are as follows: United States (46%), United Kingdom (30%) and Spain (5,9%).

The third place among importers is left to China, which reduced the volume of purchases of foreign products. In the previous period, Chinese orders accounted for 7,1% of the market, now only 4,7%. Nevertheless, even with this reduction, China remained in the top three largest buyers. China receives most of its military products (59%) from Russia. France and Ukraine account for 15% and 14% of supplies, respectively.

The United Arab Emirates, by increasing defense spending, increased its share in world procurement from 3,9% to 4,6%. In this they were helped by the main suppliers, which accounted for the majority of deliveries: USA (65%), France (8,4%) and Italy (5,9%).

Australia ranked fifth in 2011-15, with orders equal to 3,6% of the global market. For comparison, in the previous five-year period, Australian orders accounted for 3,3% of market volume. The main supplier of weapons for this country is the United States (57%). The second most important was Spain (28%), the third - France (7,2%).

Despite all the difficulties of an economic and political nature, the international market for weapons and military equipment continues to grow. The current growth has been going on for more than 10 years, and so far there are no objective reasons for which it can stop. In this regard, the countries-suppliers of weapons continue to fight for the market, receiving new contracts and fulfilling the already signed agreements.

Due to the lack of fundamental changes in the situation on the international market, the main trends that could be observed both in the past and in the year before last remain. The market as a whole is growing, and the shares of various countries in sales and purchases are gradually changing. At the same time, exporting market leaders are increasing their shares, while other states have to be content with ever smaller orders.

As in last year’s study of the structure of the market over five-year periods (2010-2014), a curious tendency is immediately visible in the new report. The ten largest exporters of weapons remained without major changes. The first two places did not change at all, and the countries on the other lines only changed places according to changes in their market shares. Where big changes again occurred in the rating of importers. Some countries start re-equipment programs and increase costs, others complete them and reduce funding, which leads to corresponding changes in the rating. As a result, a dozen of the largest importers have seriously changed both in composition and in order of countries.

22 February SIPRI published a new report on the situation on the arms market in 2011-15. About a month later, Swedish specialists should complete the work on the next report on the state of the market. Over the next few months, the Stockholm Peace Research Institute should publish several other similar documents on particular features of the international market for weapons and equipment.


Press release for the report:
http://sipri.org/media/pressreleases/2016/at-feb-2016