February 29 2016
3
In March, 1931 began to build a metallurgical plant in Lipetsk. Loggers, workers, engineers, builders went to Lipetsk from different cities. They came with their families, brought with them children. They settled in narrow long barracks built not far from the future plant, and in mud huts dug in haste. Hard to live, cold, cramped. But even this was not the main everyday problem faced by the new Lipchane. Their children had to learn, and the schools were on the other - right - the bank of the Voronezh River, and even those were overcrowded. And then the factory workers decided to give one of their barracks for school.


They made benches and tables, set up homemade ovens, and even strengthened the boards in some of the “classes”. And on September 1, 1931, the children of the workers of the future plant sat down at their desks. So the school №4 was opened, which then had one hundred fifty boys and girls.

The plant grew, people arrived in Lipetsk, almost every day new students came to the school. Now they were engaged in two barracks, but there were still not enough classes. There were no windows on the windows, the guys could not get out of the corridor for a change of fresh air — all of them would not fit in a narrow corridor. Barak is calculated on the strength of one hundred and fifty people, and in the house of knowledge more than a thousand children have already studied. And then director Ivan Ivanovich Kuchin came to the meeting of plant workers and said:

- Give the children a gift - build a school! We do not have enough space, we are engaged in several shifts, until late. Teachers take the children home every day so that they do not get lost in the forest (in those years a factory surrounded the forest with a wall, the Novolipetsk district was not built up with houses, as it is now). Boys shove wood for stoves, but it's still cold in the barracks. We are engaged in padded jackets, hats. Give children a big house of knowledge!

The decision was taken unanimously, identified builders. After work at the factory, many fathers and mothers went to help them, because everyone wanted to quickly give the children a new school. And in the summer of 1936, on the Parkovaya street, the house of knowledge grew - spacious, comfortable, bright. So school №4 began a new life.

From the first years of the school’s life, it was somehow by itself determined that the children and the teachers especially loved mathematics. In the future, after the war, the school really became the first in Lipetsk, which opened specialized mathematics classes. In the meantime, the guys are simple, “without profile”, but with great pleasure they solved examples, built graphs, found the roots of the equations ...

The first graduates (the school was then seven years old) were fifteen people (we are talking about the thirties as well). Eleven of them decided to be teachers. The rest chose other professions: Nina Fedorova dreamed of becoming a doctor, Sasha Panov - a pilot, Kolya Abashin - a builder, Katya Starykh - a long-distance captain. Dreams come true for everyone except Kati. Because fourteen guys survived the Great Patriotic War, and Katya died ...

The war claimed the lives of many students of the school. I will tell about it a bit later, but for now - that's what.

During the war years, the school did not stop working for a single day, despite the fact that the men went to the front and there were few teachers left. Engaged in the night, wrote, what will have to. And waiting for letters. Surprisingly, graduates wrote from the front not only to parents, but also teachers. Teachers took care of these letters and certainly answered. Apparently, both of them scooped each other in strength to live and fight the fascists. And they fought desperately ...

... Lydia Smyk graduated from high school in the late thirties and began to study as a doctor. The war began, and the girl from the institute was sent to the disposal of the Ukrainian front headquarters. Here, an amphibious brigade was formed to work in Czechoslovakia, that is, in the enemy rear. Lida got into the brigade of the name of Jan Hus. This brigade had to scout everything that was possible about the fascists and help the Czechs fight them ...

Lida rarely could write home, but she could not go to school at all. In her newsletters, she did not explain the real reasons for such silence to her mother. On the contrary, she reassured: “Do not be angry with me, now I will write more often. I kiss tightly. I bought myself a wool blouse. " 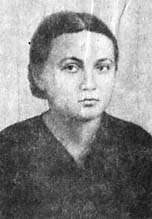 Woolen blouse ... When could she buy it? When Lida entered Czechoslovakia, something happened to the parachute, she repulsed herself from her. I spent three autumn nights in a haystack, because I hurt my leg and could not walk. On the fourth day, Czech partisans found Lida and helped them return to their group.

For six months, the “Gusevites” created a large partisan brigade in Czechoslovakia, together they destroyed almost eight hundred fascists, derailed fifteen trains, knocked out four tank and ten armored personnel carriers, blew up an ammunition depot. When could Lida buy this woolen blouse? ..

The Nazis attacked the headquarters trail, drove into the forest, surrounded. Seven "Gusevites" fought for three hours with a detachment of three hundred people. They shot everything, to the penultimate cartridge in each weapons. Everyone left the last cartridge for himself. That’s why the head of the Prague Gestapo reported to the authorities with such annoyance: “We couldn’t capture the living, we only approached the dead” ...

For more than forty years Lydia Smyk was considered missing, her achievement was not marked by any reward. But at the end of the eighties, the school club “Poisk”, which is run by a physical education and life support teacher Yuriy Nikolaevich Panov, found Lydia Alexandrovna’s relatives. The guys wrote to the office of the president of Czechoslovakia and thus found out about her fate. They sent the collected documents to the Soviet government and wrote a petition for awarding their graduate with the Order of the Patriotic War 1 degree. And then they turned to the head of Lipetsk with a request to allow the name of the school in honor of Lydia Alexandrovna Smyk. So the house of knowledge has a new name.

Because of a few lessons

Slowly, hard, our country was reborn after the war. It was necessary to rebuild the city, factories, factories, buildings. But behind these concerns it was impossible to forget about the fact that you need to teach children. Here is a small pedagogical retreat.

Before any lesson was built like this: a survey of homework, and then - an explanation of the teacher. It turned out that most of the children practically did not participate in the lesson, but were just spectators. Of course, the teachers could not help but notice that the lessons were constructed incorrectly. And in the mid-fifties, innovative teachers appeared in Lipetsk, who began to teach children differently. They built classes in such a way that they learned lessons and conversations, and almost all the class members participated in them. It was then that the term was born, which every schoolchild knows now: “grade for work in class”. After all, the lesson really need to work, and not just attend.

So, among the teachers of innovators were many teachers of the 4 school. Maria Dmitrievna Kacherina and Alexandra Gavrilovna Bezrukavnikova brought up a love for the Russian language and literature in children. Alexander Ivanovich Boykov and Elena Sergeyevna Tikhomirova taught mathematics. And the group of innovators was headed by a scientist and teacher, Konstantin Aleksandrovich Moskalenko, the name of which is now the pedagogical prize in Lipetsk for his great contribution to the profession.
Teachers from different cities of Russia, Uzbekistan, Kazakhstan, Germany, Bulgaria came to 4 school for “Lipetsk experience”. The school museum keeps records-reviews of these workshops. Here is one of them: “Because of several lessons, one could come from the distant Caucasus. School teachers # 24 North Ossetia, November 16 1962 of the year. "

Now back to the club "Search", which already started the story. With the help of this particular club, the school created a museum in which the entire school chronicle is now kept: documents, things, a huge photo album. Before all archive was stored in one of offices. But in the mid-eighties there was an accident, the school was flooded, almost all the documents were gone. And then the school director, Svetlana Petrovna Plaksa, and Yury Nikolayevich decided to restore the archive. They called for help the guys who became the first pupils of the club. Together found many graduates, teachers who have retired. "The whole world" in a few years recreated and multiplied the archive. And it became clear: not just a “warehouse of papers”, but a real museum stories schools. So he was born.

Now there are several expositions: about the war, teachers, graduates. Each one is made with love. A portrait of Lydia Smyk, Yuriy Nikolayevich himself redrawn on a large sheet of paper. He retouched almost all the old photos. Above the stand dedicated to the graduate of the school, the Hero of the Soviet Union, the pilot Vyacheslav Vitalyevich Markin, hangs a wooden model "IL-2", it was made by guys. The propeller of a small aircraft is special - it turns on and turns like a real one ...

There are very sad stands. They are dedicated to graduates who died in hot spots.

Remember, I mentioned that during the war years, former students wrote to the school? This amazing connection has been preserved to this day. 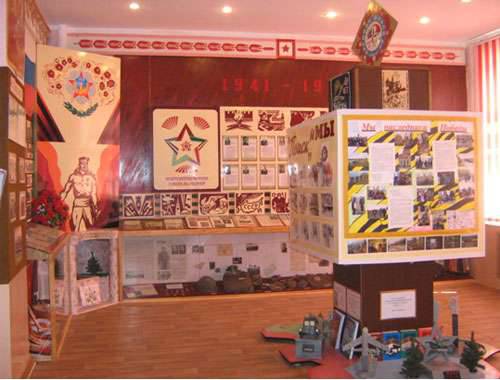 Andrei Sinyachkin graduated from school in 2006 year. After the first course of the institute went to the army, got to Vladikavkaz. In the summer of 2008, he went to school while on vacation - to see the teachers. I found Yuriy Nikolayevich. He told about his fate and about the upcoming trip to Ossetia. Andrei seemed to feel that he was seeing his mentors for the last time. On the tenth of August he died in Tskhinval. Andrei was the gunner of the motorized rifle squad, fired at the Georgian invaders. His car was hit, Andrei could hide. But he continued to fire until a direct hit from an enemy tank ... Andrew posthumously awarded the Order of Courage.

... Today, when you talk to people and mention the 4 school, many people say: “Is this the one that was built with a fascist cross?” And then all sorts of gossip are born that are embarrassing to retell something. But there are no “wings” like a swastika at the school building. And for those who give these gossip for the truth, I strongly advise you to go to the school museum.

Ctrl Enter
Noticed oshЫbku Highlight text and press. Ctrl + Enter
We are
Father told
3 comments
Information
Dear reader, to leave comments on the publication, you must to register.