Saudi Arabia and its "bombs" 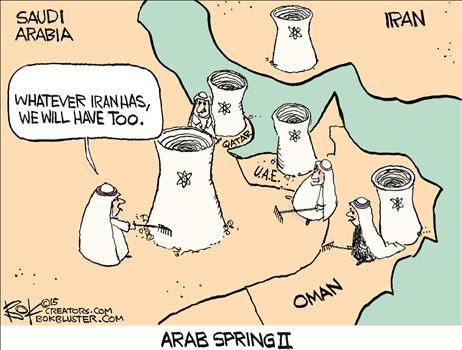 Political analyst Daham al-Anzi (Saudi Arabia) told the world community about the possession of Riyadh atomic bombs. Now the Saudis intend to conduct their first nuclear test. Al-Anzi does not believe that this is some kind of "emergency news“Because“ world powers know ”that Riyadh has a bomb. Since Russia supports Bashar al-Assad, and the unhappy Syrian people are subject to mass destruction, the army of Saudi Arabia "does not intend to stand idle." The purpose of the acquisition of bombs - the protection of the rights of Arabs and Muslims, said Al-Anzi.


Daham al-Anzi, a well-known political analyst from Saudi Arabia, told the Arab editorial staff of Russia Today that Riyadh had acquired atomic bombs two years ago. In the coming weeks, the Saudis intend to conduct the first nuclear test.

"Yes Yes! Exactly! We have atomic bombs. And this is not emergency news at all. The world powers know that we have a bomb, and we are ready to test it, if Iran (creates its own nuclear weapon and) first to carry out such a test. "

A video of the Daham al-Anzi interview with the Arabic television channel MEMRI-TV is also distributed on the Internet. MEMRI - Middle East Media Research Institute. The interview has been translated into Russian Mixednews.ru.

When asked about UN Security Council resolutions on nuclear weapons, al-Anzi replied that Saudi Arabia "acts as a responsible member of the international community." The leadership of the kingdom is simply engaged in "minimizing the threats": it is taking "the necessary measures to minimize the Iranian threat in Yemen, and now it has become necessary to also minimize this threat in the Levant and Syria."

“Russia wants to support personally Bashar al-Assad and the supporters of the regime around him at a time when the Syrian people are undergoing mass destruction. Not! The army of Saudi Arabia does not intend to remain inactive! This army represents the royal dynasty of Saud. Why do we buy all these rockets and airplanes? We already have atomic bombs for two years, and in the coming weeks we intend to conduct a nuclear test. Of course, the purpose of acquiring these weapons is to protect the rights of Arabs and Muslims. My dear brother, Saudi Arabia does not want to enter the war ... "

According to the expert, this is “not a sensation at all,” and the superpowers “know about it.” “We have already stated earlier that if Iran has the nerve to announce its own nuclear tests, Saudi Arabia will do the same. No problem, ”explained Al-Anzi.

Where did the Saudis have bombs? Sources from the United States back in May 2015 of the year stated that Riyadh was negotiating with Pakistan on the acquisition of "ready to use" atomic weapons. An anonymous source said that, according to the United States, "the real supply of such weapons has not yet been made," but "the Saudis are responsible for their words and they will do what they say."

Joshua Krause writes in the online edition about the nuclear arms race in the Middle East "Activist Post".

Despite the fact that the Middle East is one of the most conflict regions on the planet, it has previously somehow avoided the widespread proliferation of nuclear weapons, the author recalls. With the exception of Israel and several American nuclear bombs in Turkey (which will not work if the United States does not give activation codes), the people of the Middle East are completely deprived of nuclear weapons.

“And this is not because they are unable to create such weapons,” continues the journalist. - There are many oil-rich states in the region that can create it if they wish. The only thing that limits them in this intention is a series of international treaties, and nothing more. ”

The arms race is always bad, but it would be catastrophic in the Middle East, where ethnic and religious wars have been going on for thousands of years. In addition, the interests of global superpowers overlap there: Russia and the United States.

Unfortunately, the situation may change in the near future, the reporter believes. There are many signs that some states in the Middle East are seriously considering the issue of creating nuclear weapons. And the most "obvious candidate" for the development of a "new atomic program" is Saudi Arabia, the author believes.

It has been rumored for several years that the Saudis have entered into an agreement with Pakistan for the supply of ready-made nuclear weapons. However, some evidence has not appeared.

However, the other day, a representative of their Ministry of Foreign Affairs was asked on CNN about plans to acquire nuclear weapons from Pakistan. The answer was at least "very alarming."

"I am not going to go into the details of our discussions with foreign governments," the official said. He added that Saudi Arabia never discusses two things: "our faith and our security." “Saudi Arabia,” he said, “will do everything possible to protect our country and our people from any harm.”

Recently, an Israeli official expressed concern about a possible nuclear arms race between Arab countries, which will arise because of an agreement on a nuclear program with Iran.

Israeli Defense Minister Moshe Ya'alon said that Sunni Arab states are making plans to possess nuclear weapons, that they "are not ready to sit quietly next to Iran, on the verge of creating a nuclear or atomic bomb."

Regardless of whether Iran would really build a bomb, the nuclear arms race in the Middle East, the journalist writes, seems inevitable. In the coming 10 to 20 years, the region "will become even more unstable."

At the same time, Russia's participation in resolving the crisis in Syria prevents any intervention by the Saudis in the conflict, said Arab expert and political analyst Ali al-Ahmed, founder and director of the Washington Gulf Institute.

He shared his opinion with the agency. Tasnim News.

A well-known political analyst simply “mocked” the rhetoric of Saudi Arabia, which allegedly intended to “deploy troops in Syria”. After all, it is well known that Russian support for Syria "really means serious consequences" for the intervention of the Saudis.

“Saudi Arabia’s ground military intervention in Syria was impossible from the very beginning for one reason: Russia would have objected to this issue,” said director Ali al-Ahmed.

According to him, the Saudis do not want their manpower and Tanks turned into targets for Russian fighters. The expert also noted that any military action plan on Syrian territory should be agreed with the government in Damascus.

Ahmed believes that Saudi Arabia is acting "stupidly": all its rhetoric about various military operations is a complete propaganda. In reality, the Saudis are not going to do anything.

Presumably, we add to this that Riyadh is conducting the same “rhetoric” about the allegedly existing nuclear bombs. The chatter of the Saudis was already the talk of the town. And if other “anonymous sources” from the USA support this “parable”, then, perhaps, for the sake of verbal confrontation with Iran, whose leadership has long been suspected of enriching uranium in order to create a nuclear bomb. An arms race of this kind in the Middle East would be the irrevocable beginning of a third world war and, probably, a prologue to the end of humanity. Fatty Saudis or other regional oil shakes are not the kind of people who will start such a mess. They love their sweet life very much.

Observed and commented on Oleg Chuvakin
- especially for topwar.ru
Ctrl Enter
Noticed oshЫbku Highlight text and press. Ctrl + Enter
We are
Results of the week. "Like children! Country nepuganogo idiots "Syria: Americans scare themselves, and Asma Asad buys chairs
77 comments
Information
Dear reader, to leave comments on the publication, you must to register.