February 26 2016
30
Through the words of one well-known retiree, former diplomat Jim Jatras, Washington pointed out to Erdogan his insufficient intellectual level and made it clear that NATO would not cover the Turkish army, which itself climbs into the hellish inferno where the pans and pots heat up the Russians. “You guys are now on their own, and if you are so stupid that you send your forces to Syria and substitute them for a Russian blow, do not expect NATO to come to the rescue,” Mr. Jatras explained to Erdogan. And a miracle happened: the Turkish sultan remembered that he was Russia ... a friend. 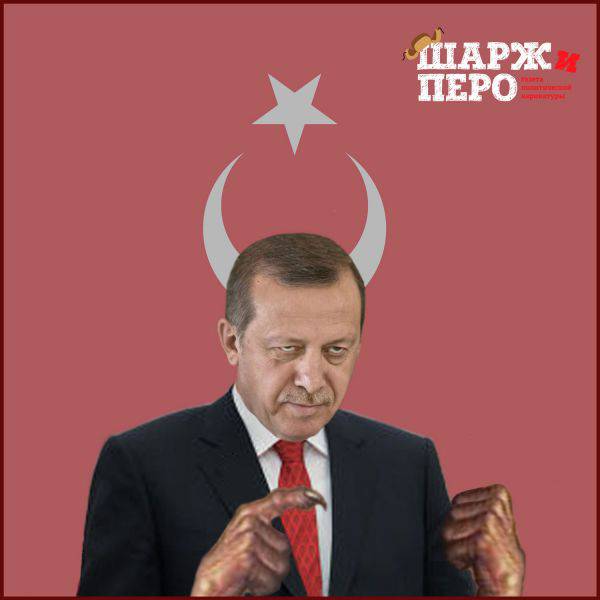 According to former US diplomat Jim (James) Jatras (Jim Jatras), the threats from Turkey, as well as Saudi Arabia intending to intervene in the Syrian conflict, were one of the reasons why the United States and Russia recently agreed on a truce.

Jim Jatras explained to R. T. Erdogan something popularly. "You guys are now on their own, and if you are so stupid that you send your forces to Syria and substitute them for a Russian blow, do not expect NATO to come to the rescue," the retiree quotes. Utro.ru.

In Washington, and at the same time in Brussels, they are afraid that the "Neosultan" Turkish "flew off the coils" will not pawn the Allies with a pig, like a pig. Alexander Konovalov, President of the Institute of Strategic Assessments, Professor of the Department of World Political Processes of MGIMO, spoke on this subject.

“Turkey unexpectedly turned out to be an important ally for NATO on the flank, which was never considered a priority in the alliance, since the bloc was created with a completely different strategic direction in mind. Sensing its importance, Erdogan could not resist the temptations, firstly, to gain value in the eyes of the allies; secondly, to use the Syrian conflict as an instrument of their cherished dream - to recreate some kind of Ottoman empire, ”said the expert Reedus.

But NATO has never had the task of pulling Turkish chestnuts out of the fire. In addition, R.T. Erdogan’s “holy war” with the Kurds compromises the Allies in the eyes of a significant part of the population of those countries in the region where the Kurds live. “The Allies are not particularly enthusiastic about the situation when they have to activate Article 5 of the Charter because of Erdogan’s adventures,” believes Konovalov.

The picture is also complicated by the upcoming election campaign in Turkey: after all, Erdogan wants to promote himself in the role of the new Ataturk and wants to turn the state into a super presidential republic.

Having received such a sensitive kick from the West, “neosultan” decided to make a statement. Actually, there were two main statements.

First, he criticized the “dishonest” truce in Syria - the one that Russia and the United States agreed to and which Assad supported.

On the air of Turkish television, Recep Erdogan said that the agreement reached was “unfair” because it does not take into account the interests of Ankara. According to Erdogan, who leads Utro.ruThe main point in the conclusion of this truce is to promote the interests of Western countries, Russia and Iran. As a result, the gains from the cease-fire will remain ... Bashar Asad. “The West, the United States, Russia, Iran, the European Union and the United Nations, unfortunately, no longer stand on the protection of human values,” Erdogan concluded.

The main reason for the “injustice” in Erdogan’s understanding was, of course, the direct message from the retired diplomat, whose mouth says Washington. Hinting that the North Atlantic alliance in the event of war on the Turkish-Syrian border with Russia's participation will not get involved in the conflict seriously grieved the poor fellow “Sultan”, who was accustomed to hearing the breath of Western allies behind his back.

The site «Anadolu» R.T. Erdogan’s commentary on the situation in Syria and relations between Turkey and Russia was published in pure Russian.

“We are not enemies of Russia and the Russian people. In the period when others introduced sanctions against Russia, we did not do that, ”the Turkish president recalled at the 21 meeting with the heads of local administrations in the presidential complex in Ankara.

The head of the Turkish state is sure that Russia did not understand Turkey. And lost a friend: “Russia lost a friend like Turkey. When it comes to our independence, we will not bow to anyone's whims. "

Allah is on the side of Turkey: “We bury the pits of those who dug them. With the permission and blessings of Allah, we will win. " Erdogan stressed that Turkey is facing the onslaught of terror, and called for abandoning attempts to play the Kurdish card: “The Kurds of my country are my citizens, my brothers. We have no problems with our Kurdish brothers, our problems are connected with terrorists. For that matter, terrorists can be Kurdish citizens, as well as representatives of other ethnic components. We know this very well. ” According to Erdogan, the international community should “finally recognize that the PYD and its military wing of the YPG are offshoots of the PKK terrorist organization, and stressed that the PYD and YPG should remain outside the peace process in Syria, as the IG and the Front an- Nusra.

The chief editor of the “Problems of National Strategy” magazine of RISI Azhdar Kurtov believes that it is too early to draw far-reaching conclusions regarding the Syrian settlement. “The cease-fire agreement between the government forces of Bashar Assad, the Russian Aerospace Forces, the US-led coalition and the Syrian“ moderate opposition ”has not even entered into force. It only allows us to hope (!) That this agreement, if it is successfully implemented, will create conditions for translating the conflict into a plane of political settlement, ”said the expert. "Free Press".

In his opinion, the ceasefire is difficult to implement in practice due to the lack of a single front line. In addition, the Assad army, with the support of the Russian Aerospace Forces and the United States, will continue to destroy Islamic radicals.

And it cannot be said that the Turkish factor is completely neutralized: “If Erdogan continues to fire at the Kurds or, all the more, he decides to open ground intervention, I do not exclude that the agreement reached will have to be revised. Given the fact that the Turks did not sign it. And all sorts of diplomatic equipment and hints, as they say, "blows the wind."

“In the end, the US State Department could have called the Turkish ambassador to make a public statement. There are many ways in international politics to make it clear that they will not tolerate such behavior. When Americans see fit, they act very hard. If they didn’t do that, they don’t really want to, ”the expert believes. - Relations between the US and Turkey are more like a game to the public. Erdogan understands this, so he can afford unpleasant remarks against the American leadership. That is, they scold him, but they are clearly not ready for more decisive measures. So let's not hurry with the evaluation of the agreement: it can still change. ”

There is a slightly different opinion. Stanislav Tarasov, editor-in-chief of the eastern version of the news agency Regnum, highly appreciated the possibility of implementing the agreements reached.

“It is very important,” he said to “SP”, “that the United States and Russia managed to come to an agreement at the moment when Turkey behaved very provocatively, shelling the Syrian territory. Ankara sought to finally split the anti-terrorist tandem Moscow-Washington. Did not work out. The US authorities insist that the Turks cease to engage in provocations and join the truce. And the Turkish leadership was forced to confirm its participation in the peace process. ”

In general, let us add from ourselves, one can say that “neosultan” suffered a kind of diplomatic defeat in the international arena. A wound from a diplomat, even a retired one, coupled with the apparent reluctance of Washington and NATO to cover the Turkish ass on the battlefield, says a lot. Justification of Erdogan, who tried to reduce the whole problem to the “terrorists” of Kurdish nationality, sounded very unconvincing, because everyone knows that Erdogan is a consistent opponent of Assad, and everyone remembers how he called him a “butcher” and a “murderer”. Or is Assad already enrolled in the Kurds? The statement of the “Sultan” on “friendship” with Moscow also eloquently testifies to the loss of Ankara in the international arena.

The next failure of Erdogan may be the election campaign. Recall, the president recently made a proposal to move the state from parliamentary to presidential form of government. His (Erdogan) powers in this case will become truly limitless. The arguments of the president seem to many analysts and observers to be extremely inconclusive. For example, the “Sultan” believes that it is not good when the president has to reckon with the parliament and the prime minister. It looks like a "dual power". Therefore, Erdogan wants to rewrite the constitution and give himself almost absolute authority. As for the parliamentary system, its president declared "old-fashioned."

Will the Turks support the “new Ataturk”, which has spoiled relations with Moscow, risking ruining relations with the US and NATO and driving the country into a full-scale political crisis?

Observed and commented on Oleg Chuvakin
- especially for topwar.ru
Ctrl Enter
Noticed oshЫbku Highlight text and press. Ctrl + Enter
We are
Results of the week "I do not need a Turkish coast"Iran in the Syrian conflict. The confrontation with Saudi Arabia and the interests of the Shiites
30 comments
Information
Dear reader, to leave comments on the publication, you must to register.