February 26 2016
26
On Tuesday, February 23, PRC Minister of Commerce Gao Hucheng said that China does not consider the Trans-Pacific Partnership Agreement aimed against him. The words of the official actually need to be interpreted exactly the opposite: Beijing understands how threatening the situation is, and is preparing to counteract. Chinese analysts have already calculated the possible consequences of creating a new supermarket in the Asia-Pacific region, and not only economic, but also political: both those that come at once and in the future. As for Russian officials, they don’t even try to hide their anxiety. What are they afraid of in Moscow and Beijing? 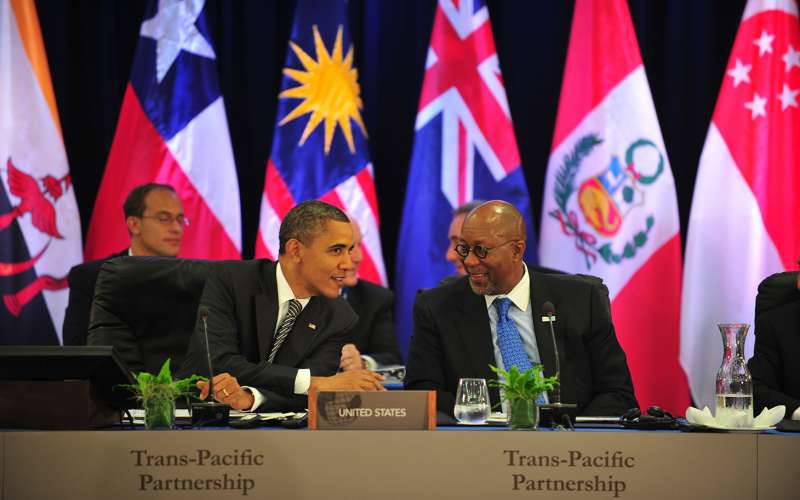 So, the signing of the agreement on the Trans-Pacific Partnership 4 February 2016 (otherwise Trans-Pacific; the exact form of entry in the Russian language is not settled), without a doubt, has become one of the most important events not only of the month, but of the whole year. Of course, the ratification of the treaty in national parliaments is still ahead, but it is unlikely that problems will arise. The single trade union will unite the markets of Australia, Brunei, Canada, Chile, Japan, Malaysia, Mexico, Peru, Singapore, USA, Vietnam and New Zealand. Already from a simple listing it is clear that the supermarket is mainly created by either very rich countries, or those who have significant potential and at the same time pursue a US-friendly policy. South Korea, the Philippines and Colombia are next in line - countries that are both economically and politically closely connected with the United States of America. With Taiwan it is more difficult, but under certain circumstances they can invite him. It is already clear that the decisive role in the union will be played by the United States of America, who will act as the administrator and moderator of the entire project.

However, economic logic traditionally goes alongside geopolitical, and the latter requires the elimination of any alternative projects in the region. Including the military way. Hence the need for the military cooperation of the TTP members. The past Pacific military alliance, SEATO, was initially quite loose and collapsed as soon as its complete inability to protect its members became clear. The new alliance, if it is created, will be much more durable, since it initially has common, unambiguous tasks.

Implicit, but indicative preparations in this direction have long been underway. So, in Japan, on two remote islands of Io (Iwo Jima) and Minamitorishima (more than 1800 km east of the Japanese capital) there are large military airfields and a number of other objects of unknown purpose. Access of civilians to the islands is prohibited, on satellite maps the image of these islands is specially made blurry, and in the Google service. Planet Earth ”the island of Minamitorishima is not shown at all. Not long ago, Tokyo regained the right to collective defense outside its own country. Official statements are already preparing the world community for such a return. In mid-February, the Japanese ambassador to the EU suggested that his country would assume a “much bigger” role in the near future to maintain global security than before.

Australia, New Zealand and Chile - other TTP members also have their remote island possessions. In this case, the Australians have just completed the two largest ships in stories his fleet - Both landing helicopter carriers, and the Chilean military in 2011 acquired a large landing ship-dock class Foudre, and two years earlier - a decommissioned tanker in the ocean zone. Now the Navy of these countries have become able to conduct military expeditions far from their shores.

Thus, the hypothetical Pacific Alliance will have supporting bases and squadrons tightly locking all entrances and exits, and capable of preventing any unauthorized activity, almost along the entire perimeter of the ocean. In particular, the RIMPAC annual naval exercises are arranged for this purpose.

Potential targets of the newly created military bloc, most likely, will be the three largest APR countries that do not fit into the overall configuration. This is Russia, China and Indonesia. In essence, the war against them is already underway, albeit not in explicit forms, which can now be called "hybrid."

So, the disintegration of Indonesia actually began in the 2002 year after the secession of East Timor. In 2006, another province, Aceh, with the tacit consent of the central government introduced Sharia law and in fact Jakarta also does not control this territory. Its separatist movements exist in the South Moluccan Islands, West Papua, etc. For final registration in independent states, these movements need only the collapse of the Indonesian government and limited outside help. Worse, local Islamists are increasingly beginning to raise the banner of the terrorist organization ISIS. Understanding their difficult situation, Jakarta, on the one hand, strengthens the navy and at the same time tries to join the TTP itself, in any case, such an intention was announced on October 27 of the year 2015.

Another obvious target of the alliance is the People’s Republic of China. By itself, China is already a huge megaproject, in addition, the Celestial Empire is implementing several integration projects at once: “One country - two systems”, “New Silk Road” and direct military expansion into the South China Sea. All this creates insurmountable contradictions between the American and Chinese regional order systems, which can only be solved according to the principle “there will be only one at the end.”

It is difficult to say about plans for the Far East of our country, but most likely, the TTP members also have them. Euromaidan has virtually destroyed any prospects for integration processes between Ukraine, Russia, Belarus and Kazakhstan, and the protracted economic crisis threatens the stability of the Russian Federation itself. Although the TTP trade agreement and the hypothetical military alliance in the Asia-Pacific region are not directly related to each other, the general direction is already visible.

Can Russia prevent the formation of the Trans-Pacific Partnership? To interfere - no, can not. But she can easily slow down the integration processes of the global pro-American project if she has enough skill and willpower. So, in the spring of the Russian city of Sochi, Prime Minister of Japan Shinzo Abe is to visit. He does this despite the wishes of the American administration, which is a lot in itself. Japan is the second most important TTP country after the United States, and much will depend on its position.

Ctrl Enter
Noticed oshЫbku Highlight text and press. Ctrl + Enter
We are
Results of the week. “Ta-ak. Hence, we know the Russian language. Why was it necessary to hide? ”Strangulation: the context, conduct and consequences of the American naval blockade of China
26 comments
Information
Dear reader, to leave comments on the publication, you must to register.