Oddities DNR: Purgin write, Khodakovsky in mind? Or write too?

February 25 2016
58
Looks more and more strange what is happening in Donetsk. What I do not quite understand these processes, it is not so bad. The main problem is that they are no longer understood by those who live there. Considering that the majority of these people are intelligent and able to put two and two together, then the lack of understanding of what is happening by these people is no longer alarming. And does not even cause "deep concern." 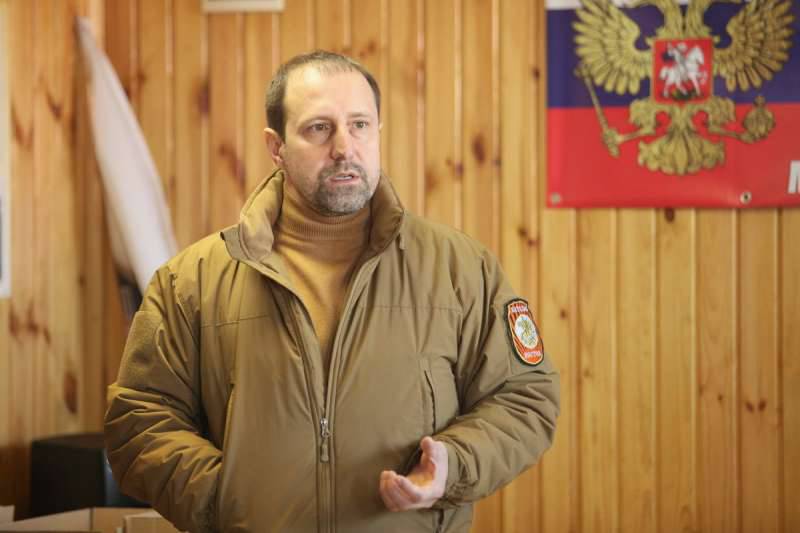 More and more the republic is no longer even resemble itself. Not in words, in words everything is beautiful. Celebration of life, the path to a bright future under the leadership of the leader of the people Zakharchenko and so on. You can write about it there and collect information too. About something more - it is impossible. Or you can, if you are a person invested with the trust of the same leader. But you will write what the leader wants. No - no one forces. For republic, equality and fraternity.

However, I have not seen the construction of the republic during the last year. I observe a certain monarchical structure, in the model and likeness, probably a criminal one. Rejects all those using it are not able to get along.

As a matter of fact, who is supposed to rule the republic? Probably including those who fought for it. Those who worked for the good of those who fought. But he traded humanitarian aid and medical supplies from Russia. But in fact, for some reason, it turns out that way.

We watched as field commanders were gradually squeezed out of LDNR and squeezed out. Someone had better luck, and he lives quietly in Russia today. Someone less. But we have the fact that, in fact, of those who were on the point of hitting the junta, perhaps only Givi remained. Where are the others?

Next came the turn of politicians who were not entirely willing or not at all agreeing with the general course. What is the constitution, democracy and other garbage performed by the authorities of the DPR, on the example of Purgin was revealed, and manifested quite convincingly. There is no constitution, no laws. And, apparently, as long as the people who have come running in power from nowhere, it will not be.

Purgin, of course, is not a fighter, but a theorist, because that is how it turned out to be famously broken and removed. Here, of course, you can sympathize, but the fact remains. Purgin - the past DNI. So it's not about him.

We will talk about the actual last representative of the forces that came to the defense of the DPR two years ago. Of course, I'm not talking about the great Zakharchenko, no. His merits are not subject to discussion and condemnation, but they don’t drip over him. I'm about Khodakovsky.

I will note right away that I did not have any direct contacts with Alexander Sergeyevich himself or with the representatives of the Vostok brigade, although I will be pleased to talk with each other on occasion, therefore everything stated claims to have some objective consideration of the current situation.

The fact that Khodakovsky is currently harassed in the style of "Assad must leave" or "Kadyrov must leave" is not in doubt. And it takes all this rather schizophrenic forms. As it turned out, even 15 March 2015, Zakharchenko signed a decree on the resignation of Khodakovsky from the post of chairman of the DPR Security Council. But in many of his appeals recorded on video, Alexander Vladimirovich used to call Alexander Sergeevich during the whole 2015 of the year. It would be funny if it did not remind fake documents about the withdrawal of backdating Purgina and Alexandrov.

Apparently, time has not taught anyone anything.

Well, what exactly is Khodakovsky imputed to? The list, if anyone is interested, drew the hard workers from "Gazety.ru". But since this is Gazeta.ru, which we have carried apart so many times, we have no desire to discuss this list. For nonsense. Connection with Akhmetov, retreat from Karlovka, and much more.

Yes, I will not hide, he repeatedly heard about the existence of a certain connection between Khodakovsky and Akhmetov. But, no one has ever given me any evidence. Moreover, on closer examination, it turned out that gas stations and market stores were guarded by completely different units. Not "East".

I also want to say a few words about the retreat from Karlovka. But I will not, for Bes said all the better. Oh, yes, Bezler is also not in trend today ... Well, okay.

If you can’t become better yourself, then the other’s fools will immediately show yourself to be great..

But who are the accusers? Strange, but each of them can say: "And myself?" But - act. Although, for the sake of justice, I will note that Karlovka was abandoned after the heroes who were subsequently hung with crosses left everything from Slavyansk to Donetsk. What, however, does not prevent them today from accusing Khodakovsky of leaving such an extremely important strategic point.

By the way, about the assets of Akhmetov. Recently, the DPR was visited by one very senior person. And held a series of meetings on the topic of economics. In particular, the need for the further nationalization of the assets of the oligarch Akhmetov. The administrative asset, as well as the leadership of law enforcement agencies, was informed that, although there is no reliable information, there is reason to assume that Hodakovsky is a hidden enemy working in Ukraine and Akhmetov in particular. So, we must take appropriate action.

It will be interesting to look at how Khodakovsky will get out, who, in theory, should by all means prevent nationalization. Especially after he repeatedly condemned the termination of the process of this very nationalization.

The process, by the way, stopped without him. For it was not within his competence. And even more interested in this situation, tomorrow Khodakovsky will be removed, and nationalization will not begin. And then what?

We go further. Well, they decided to throw down Khodakovsky. It is clear that if they decided in Donetsk upstairs, it will be difficult to convince. But the methods ...

20 February in the city of Snow had to pass youth competitions in Greco-Roman wrestling. In which as guests and sponsors were the "Patriotic Forces of Donbass", created at the time by the same Khodakovsky. More than 250 boys from 9 cities, including those from the LC, attended the competition.

The day before the start of the competition, the administration of Snezhny contacted the management of PSD and allowed them to attend the event only with the complete absence of their symbols. "Patriots" have agreed, because in such a case the symbolism is not the most important.

But after the start of the competition, the organizers of the event received a call, and by order of the head of the administration of Snow Darkovsky, the event was ordered to stop, despite the fact that the children were already fighting on the carpets.

To say that it is ugly - to say nothing. It is not even dirt. This is mud. So, to take, and to disperse the children who were waiting for these competitions, were preparing ...

Representatives of "PSD" offered the organizers a way out: they say they all leave the event, but they give the children to finish the competition and they will be rewarded. They received a negative response, and the event without explanation was interrupted (with a threat even to the dismissal of the director of the sports complex with insubordination). Beautiful and tasteful.

But this is not the final, no. After some time, it turned out that, by order of the administration of Snezhny, it was ordered to hold the same championship, but on another day, already under the patronage of the Head of the Republic. And nothing can be said here. It is beautiful when even the care of children is sacrificed to hidden intrigues.

Well, the broken press conference of Khodakovsky in the same canvas is spinning. You know, even Ukraine can be surpassed at such a pace. A minute before the air fire alarm, a power outage, as the building burns and other special effects in the range. True, the fire other than firefighters, no one watched, but the essence of the work of a fireman, not only in extinguishing, but also in prevention. And the ether could be "burning". Extinguished ...

And practically at the same time, Givi's statements that he does not trust Khodakovsky, and that of Vanya Russky that Khodakovsky "about ... l" the military operation in Marinka, appear on the network. One could believe it (in the case of Givi, everything is clear - the pressure is colossal, it's not for nothing that tanks “For Zakhara-Kononov” written), but I don’t believe it. Vanya Russkiy is clearly that ... Although I heard only good things about him, and they took part in the release of one journalist, as it were. I don't think Ivan has come to that. They could just use the name.

But that's not the point! And the fact that the operation Maryinskiy "East" did not participate. It was told to me by those who really fought there. And I believe them. From the 1-th brigade of the DNI fighters. And not to hang for the position, because the President of the Security Council is one thing, and the Minister of Defense is another. So, if anyone has an operation, he must start with a minister.

But after all, in all of this information, even heroically “surfaced” Druzhban Gubarev, deputy Orlov ... To whom we dedicated not one line, describing his “exploits” for the good of the republic. Another would have drowned or shot himself under load, and this water from a goose is like a foam plastic to axes. And again, to say the least, it is not true. And simply - lying as usual, however. A year ago, the Security Council dissolved ... Well, yes!

From all you can make a definite conclusion is unrealistic. But the trend ... Of course, as one journalist working in the DPR said, it is not worth taking out the dirty linen in public. The main thing is that they do not shoot much, the plants start up, they repair the legs of monuments.

And the fact that someone was kicked out of the DPR, threatening with reprisal, someone was beaten and robbed by a deputy of the People's Council, somewhere for the sake of political intrigues they were thwarted by a children's sports festival, it’s not worth writing about. As well as the fact that it is already possible to say that documents of the highest level (like Presidential Decree) are systematically forged, this is a trifle on a republican scale.

Forgive me, of course, but since we are not worth the all-powerful Minister of Information of the DPR, Mrs. Nikitina (only Aunt Denis Pushilina is purely by chance), we will write about it.

For all the same, I want people to remain in the DPR, the essence of whose work is not hard cutting and mastering Russian money.

Ctrl Enter
Noticed a mistake Highlight text and press. Ctrl + Enter
We are
Laughter through tears: did Khodakovsky ruin the chapel too?Zakharchenko in Debaltseve: "This city for us is a symbol of resilience, a symbol of struggle"
58 comments
Information
Dear reader, to leave comments on the publication, you must to register.