February 24 2016
35
The spokesman for the Russian Ministry of Defense, Major General Igor Konashenkov, told the media about the start of the work of the focal point for a truce between the warring parties in Syria during the briefing. The coordination center was opened at the Hmeimim airbase. According to Igor Konashenkov, about 50 experts divided into five functional groups are involved in the work of the center: 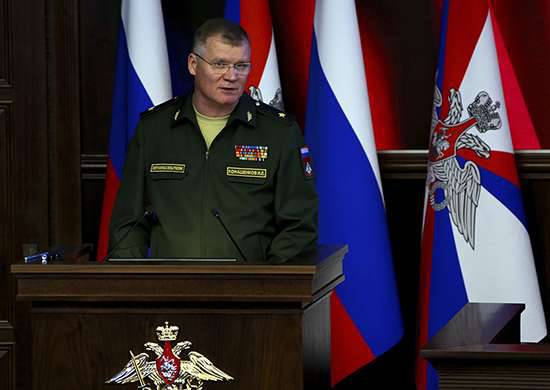 Ministry of Defense of the Russian Federation voiced the main tasks of the Coordination Center:

receiving, via a single telephone number and e-mail address, appeals from representatives of local authorities and armed groups about the desire to cease hostilities and begin negotiations on reconciliation;
providing maximum assistance to all who contact the Center for the organization of contacts and further cooperation with the Syrian authorities to sign agreements on the cessation of hostilities and reconciliation;
interaction with international organizations on the delivery of humanitarian aid to Syria’s population and the return of refugees from other regions, as well as countries.

It is noted that the work of the center is covered by various media, including the Syrian. Also used to inform the use of SMS-mailing and other tools.

According to Igor Konashenkov, the first information about the groups who want to add up weapon, come from the provinces of Lattakia, Hama, Homs, Daraa and Damascus.

From the briefing of the Ministry of Defense of the Russian Federation:
One of the results of this work is the signing of a petition for reconciliation, as it, in particular, happened in the village of Javalik and in a number of other settlements of the province of Homs. There are practical results in the north of the province of Latakia. In the mountainous part of this province, hostilities ceased hostilities in the settlements of Gnaymiya, Laulyat and Burj Islam, and documents were signed on the truce. Negotiations are underway in a number of settlements in the province of Latakia.

The representative of the Defense Ministry noted that the Russian-American agreement does not suit Turkey, which continues to strike at the positions of the Kurdish militia in the north of the SAR. Shelling of Syrian settlements from the Turkish heavy artillery is noted.

MO RF:
Instead of accusing VKS of the Russian Federation of indiscriminate strikes, we urge Amnesty International, Human Rights Watch, Doctors Without Borders and other organizations to give their official assessment of these criminal actions of the Turkish armed forces.

Igor Konashenkov noted that Russia had transferred the data to the US military embassy in the US embassy within the framework of the agreements reached on Syria, however, a day later the American side did not send the response data to the Russian military.

Commentary of the official representative of the Ministry of Defense of the Russian Federation:
It is not known whether this is related to the strange statement of Pentagon spokesman Peter Cook, who has a very superficial, or rather, a distorted view of the Russian-American agreements reached on the Syrian theme.
Mr. Cook for some reason said the other day that the cease-fire in Syria is a test for the Russian authorities. Mr Cook would have to temper his ardor and focus on the activities associated with the organization he represents. That is - the Pentagon. To do this to him, unlike his predecessors without knowledge of military affairs, is not easy. So he seeks to compensate for their failures loud blunders. You have to be modest. Yes, and more professional.

There are reports in the media about the alleged development by our American partners of some plans under the conditional names “B” and other letters of the alphabet. The Ministry of Defense of the Russian Federation is determined, and moreover, they have begun concrete and difficult practical work on reconciliation in the Syrian Arab Republic. We hope that our American partners, instead of letters and words, will move to concrete deeds as soon as possible.
Major General Konashenkov noted that recently, the activity of Russian aircraft in the Syrian sky has somewhat decreased. Russian aviation It does not strike in those territories where information comes to the Coordination Center about the readiness of individual groups to lay down their arms. The attacks on the militants Jabhat-en-Nusra and ISIS, meanwhile, continue.

MO RF:
Over the past two days, 62 has been made combat sorties on 187 targets in the provinces of Hama, Raqca Deir ez-Zor, Aleppo and Homs.

Ctrl Enter
Noticed oshЫbku Highlight text and press. Ctrl + Enter
We are
Tanks and roses. Donetsk lives in a fragile truceOfficial briefing of the Ministry of Defense
35 comments
Information
Dear reader, to leave comments on the publication, you must to register.