Who is Obama. A look from Japan 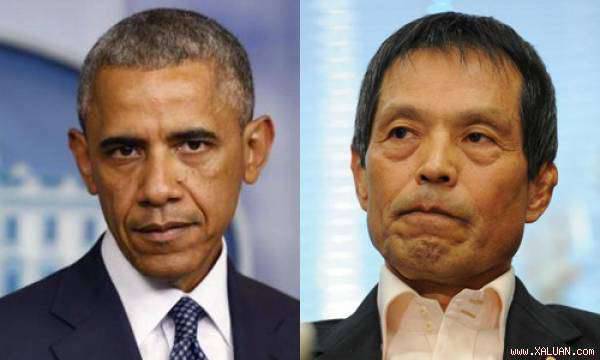 A member of the Japanese parliament from the Liberal Democratic Party apologized for calling Obama a black descendant of slaves.

Tokyo. Member of Parliament, belonging to the party of Prime Minister Shinzo Abe, apologized for his remark about US President Barack Obama. “Now there is a black president in the USA. He is black. This means slaves, ”said Kazuya Maruyama, head of the legal department of the Liberal Democratic Party of Japan, at a meeting of the constitutional commission of the upper house of the Japanese parliament.

Maruyama, a lawyer who became a legislator, also said: “When the United States was founded, no one expected the black or slave to become president. This is a country that has dynamically transformed. ” He apologized at the press conference after the meeting, saying: "I sincerely apologize, I made comments that may be misinterpreted."

Almost certainly, opposition parties will criticize his statements as racist, creating another problem for Abe (Prime Minister) after a series of scandals with members of the Liberal Democratic Party. The recent resignation of the Minister of Economic Policy (the cause is a scandal with election funds) and a member of parliament (adultery).

During the meeting of the constitutional committee, Maruyama expressed his opinion that it would not be a constitutional problem if Japan became the US state 51, and even said that this would allow a person from Japan to become the US president. He then mentioned Obama, the first African American president.

thepersoniamnow: I’m not particularly worried about Obama, but I would like to distance myself from the racists, who next day abandon what they said yesterday. Also, if he is such an enthusiast storiesHe should know that Obama is the son of a Kenyan, not a slave.

Yubaru: Indeed, no one expected the Negro to become president. But this does not justify a mistake towards Obama: while many American blacks are descendants of slaves, Obama is not one of them. Technically, Obama is not the first black president, he is the first president of a mixed race. People often forget this fact.

Alphaape: Not all black Americans are descendants of slaves. Many emigrated from Africa and the Caribbean on their own. Also: Slavery ended 151 a year ago, and there was plenty of time for other blacks to come to America, and today we have the second or third generation of those whose ancestors came to America after slavery ended. I agree with the statement that when the United States was founded, no one expected the Negro or the slave to be elected president. But in this overly informed world this may be misinterpreted.

Sioux Chef @ gaijinifo: This is a fake.

OssanAmerica: Maruyama looks like an idiot. But the article assumes that he did not make racist statements, but said that the United States had changed over the years, which is certainly true. Could it be his fault that he called Obama the black president instead of being the historical president? But he is an idiot, because he did not think about how he would be quoted by the press and political opponents.

JeffLee: Title is invalid. There was no apology. Assuming that others have misunderstood you, doesn't even come close to the notion of “excuse.”

cleo: The remark about “51 state” seems to me a much bigger problem than a few ignorant statements about someone's ancestors.

paulonusa: Maybe he should have checked the Obama page on Wikipedia before giving history lessons?

Wolfpack: I can understand people in other countries who do not understand the features of Obamic origin. In America, the topic of race has always been hotly debated. The fact that slavery existed in the United States was always used by the left to accuse most American whites of oppressing black to this day. The irony is that later immigrants assimilated better and achieved more in fulfilling the American dream. Examples of this are Obama and Colin Powell. So the problem is not in the race, but in the culture of dependence on the state, characteristic of the blacks of the USA.

Ctrl Enter
Noticed oshЫbku Highlight text and press. Ctrl + Enter
We are
A great interview with Sergey Lavrov: about Ukraine, Obama and IranJapanese Prime Minister Shinzo Abe: Bitter Taste Has Power
55 comments
Information
Dear reader, to leave comments on the publication, you must to register.