How to destroy the "Right Sector" 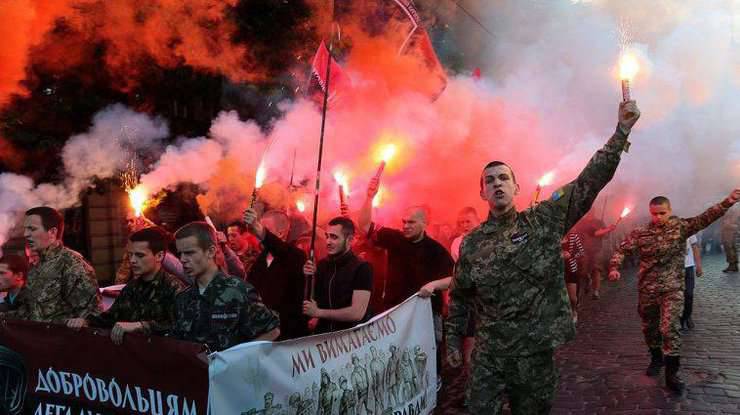 The SA, the assault detachments, known as the “brown-shirts”, played a decisive role in the rise of the German National Socialists. After the "beer putsch" - an unsuccessful attempt to seize the power of 9 in November 1923, were banned, but continued to operate under a different name. In the 1930 year, after the Stennes rebellion, Hitler personally led the assault troops, becoming the Supreme Führer of the SA. Thanks to the power support of the brown shirts, Hitler came to power.

After the Nazi Party came to power, the assault detachments had the status of auxiliary police for a short time, but after the summer of 1934 (the so-called “night of long knives”, when the SA leadership led by Ernst Röhm was destroyed), they lost their significance, and the SS .

The SA detachments, which had been greatly reduced numerically, existed until 1945, but by this time the stormtroopers had not played any role in politics. Perhaps that is why the Nuremberg process did not recognize the members of the SA (as opposed to members of the SS) a criminal group.

Let's go back in our days. Ukraine, 2013-2014 years. The coup was carried out with the participation of the gang "Right Sector", and this formation played the most important role. In addition to ordinary frostbitten people, the composition of the "Right Sector" included well-trained fighters. They were trained by experienced instructors from Europe and the USA. The training took place both on the territory of Ukraine and abroad. Trained provocateurs eventually led the so-called hundreds of self-defense Maidan, where they trained patriots - recruits.

The coup d'état in Ukraine took place thanks to the actions of these trained radical elements. Funded both from outside the country and local Ukrainian oligarchs. Igor Kolomoysky, the former governor of the Dnipropetrovsk region, was the most financially involved in the creation and promotion of the right sector. He supported the idea of ​​power change of power.

As a result of an armed coup d'état, pseudo-patriots headed by Poroshenko came to power in Ukraine. And from that moment on, the role of the “Right Sector” was already played, so Poroshenko needed to take control of all armed gangs, which turned out to be quite a few. However, the “Right Sector”, unlike all other natsbats, did not come under the control of the state and to this day remains an illegal armed group. Than actually signed a sentence. At the same time, his initial loyalty to power was replaced by aggression.

Recently, in the media of Ukraine, and, as we know, all the media in Ukraine are tightly controlled by the state, more and more information about various crimes with the participation of representatives of the PS, although a little earlier, such information was carefully hidden from society, so as not to discredit the popular pseudoheroes to whom their career growth current ruling elite.

What happened to the progenitors of the "Right Sector", Hitler's attack aircraft SA? What happened was that: 30 June 1934 was held, known as the “Night of the Long Knives” operation - the operation “Hummingbird”. The reason for the massacre of the once betrayed radicals was the disloyalty of the stormtroopers led by Ernst Röhm and the suspicions of preparing the putsch.

Ctrl Enter
Noticed oshЫbku Highlight text and press. Ctrl + Enter
We are
Step rightValentin Falin: West and Russia in the XX century: connection of times
70 comments
Information
Dear reader, to leave comments on the publication, you must to register.