On the eve of February 27

February 25 2016
27
Bashar Assad supported the plan of Russia and the United States on a cease-fire in Syria, subject to the continuation of the fight against the Islamic State and other terrorist groups. In this case, the Syrian authorities reserve the right to respond to any violations of the truce by terrorists. 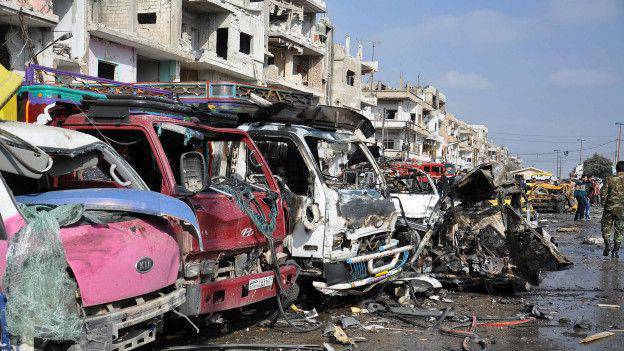 The United States and Russia have announced the approval of a plan on the conditions and duration of the cessation of hostilities in Syria, 22 reported February "BBC".

“The United States and Russia ... are proposing to end hostilities from 00: 00 hours Damascus 27 February February 2016. The cessation of hostilities should concern those parties to the Syrian conflict who indicated their commitment to the treaty and accepted its terms, ”the United States and Russia joint statement issued by the State Department quoted the television and radio company.

It is clarified that the Islamic State, Front al-Nusra and other organizations recognized by the UN Security Council as terrorist organizations do not fall under this cease-fire agreement.

The comment of the agreement by senior officials from Washington is also known. US Secretary of State John Kerry said: “Today’s agreement is the result of goal-oriented diplomacy in many countries and organizations, and I want to thank everyone who worked on it, including the US and Russian delegations, as well as other members of the International Syria Support Group.”

“If the program is implemented and respected, a cease-fire will not only reduce violence, but also expand the supply of urgently needed humanitarian supplies to besieged areas, and also support a political transition to a change of government that will meet the aspirations of the Syrians,” Kerry said.

In the comments of V. V. Putin, transmitted by the Russian media, the agreements on Syria are called a real step towards stopping the bloodshed. Putin also said that the cease-fire was approved by him and B.H. Obama.

As President Putin clarified in his address, Russia and the United States will jointly determine the areas where military units that have agreed to an armistice act, notes RBC. Putin made a promise that neither the Assad army, nor the US-led international coalition, nor Russia would conduct combat operations against such groups.

To control the cease-fire, the United States and Russia will create a hotline and, if necessary, a working group to exchange information.

The opinion of the opposition is also known. The leader of the National Coalition of Syrian Revolutionary and Opposition Forces (NKORS), Khaled Khoja, said in an interview with Al Arabiya Hadath TV that the agreement lasts for two weeks, but can be extended if the parties observe it.

According to Riad Hijab, the head of the High Negotiating Council (a body established in December 2015 for opposition negotiations with the Syrian authorities), the opposition representatives agreed in principle to a temporary truce with international mediation in Riyadh.

Supported by Riyadh, the opposition High Negotiating Committee intends to support the ceasefire agreement in Syria, but under certain conditions, the channel reports "Euronews".

According to the cited document, the opposition "agrees to respond positively to international efforts to achieve a cease-fire" in Syria, subject to the lifting of the siege of Syrian cities, the release of prisoners, the cessation of civilian bombardment and the delivery of humanitarian aid.

The official reaction of the Syrian government to the new agreement became known 23 February.

An official source in the Foreign Ministry said Tuesday, reports SANAthat the Syrian Arab Republic accepts an agreement on the cessation of hostilities in accordance with the agreement between Russia and the United States, subject to the continuation of the military struggle with the “Islamic State in Iraq and Syria” (ISIS), “Dzhebhat al-Nusra” and other terrorist organizations, including related to al-qaida.

The source added that to ensure the success of the cessation agreement on the planned day (Saturday, February 27), the Syrian government confirms its readiness to continue efforts to coordinate with the Russian side to identify areas in which armed groups are located that will be affected by the ceasefire agreement throughout its duration.

The source noted that the Syrian government can change its position in order to counteract everything that could undermine this agreement. The government insists on the right of its armed forces to retaliate in case of any violations related to the actions of some groups against Syrian citizens or the Syrian armed forces.

What do the experts think about the prospects for a truce?

If, despite bad relations, Russia and the United States manage to reach agreement on Syria, it means that “we remain negotiable, then there is a desire on both sides to stop it and understand how dangerous it is,” said Irina Zvyagelskaya from the Institute of Oriental Studies of the Russian Academy of Sciences. Her opinion leads newspaper "Vedomosti".

The chairman of the Presidium of the Council on Foreign and Defense Policy, Fedor Lukyanov, considers the agreement "encouraging." However, the expert does not overestimate its value.

“This is very encouraging - there have been no such signals for a long time, but this does not mean that the nature of the relationship will begin to change as a whole, it will not start, it concerns only specific issues that the parties consider important,” he said.

The meeting of the opposition, we add from ourselves, for a reason was held in Riyadh. There is an opinion of foreign experts about the likely cessation of “sponsorship” by the Saudis factions fighting against Assad.

As said in a conversation with RBC A researcher at the University of California at Berkeley, Peter Bart, if the Assad troops, with the support of Russia, succeeds in taking Aleppo, regional powers, in particular Saudi Arabia, may stop supporting the armed opposition "on the grounds that it will not be able to win."

The armistice agreement will be respected if the parties find a “common point” in Syria, said political analyst from the University of Osmangazi (Turkey) Chenap Chakmak.

"The United States may stop so insistently demanding the displacement of Assad, and Russia - to show greater zeal in the fight against LIH", - said the expert.

But how to separate the "moderate" groups from the terrorist? And it is necessary to do this, as it is not supposed to be conducted against the first combat operations.

Identifying “moderate” factions will be challenging, especially in the province of Idlib, said "Vedomosti" a person close to the Russian Ministry of Defense.

Many groups with “moderate” flags are fighting together with “Dzhebhat an-Nusroy”, and other pro-Turkish groups of the “Syrian Free Army” have declared that they will continue the war not only with the Syrian army, but also with the Kurds.

“Who is this Syrian opposition is generally the biggest secret, because there are 100 units that take different positions, and some also change names,” said Alexei Podberyozkin, director of the Center for Military-Political Studies of MGIMO.

A spokesman for the High Negotiating Committee, Naasan Aga, said that general elections were irrelevant at such a hectic time, he said "Reedus" with reference to the Al-Arabiya channel. The event may put the lives of civilians at risk.

Currently, the United States and Russia are discussing the preparation of a draft resolution of the UN Security Council in support of the agreements reached on establishing a ceasefire in Syria. This was stated by Deputy Foreign Minister Gennady Gatilov, reports "Lenta.ru".

In addition, a source at UN headquarters told Tass that Russia and the United States have already prepared two draft resolutions. Based on the existing two texts, it is supposed to work out one document for adoption in the coming days.

Finally, the opinion of American analysts about the political goals pursued by Russia in Syria appeared in a major press.

By agreeing with the United States on a ceasefire regime in Syria, Moscow decided all the tasks set in this direction, and even more. About it writes "The New York Times", reports TASS.

According to analysts, Moscow set itself five tasks in Syria: “stop attempts to change the regime in the country and incitement to this from the outside”, “disrupt Washington’s plans to isolate Moscow”, “prove that Russia is a more reliable ally than the United States”, "Demonstrate new weapons." There was also an additional task: to remove the Russians' concern about the situation in Ukraine.

"To a certain extent, all these five goals have been achieved," - says the American edition.

Thus, the West, one way or another, was forced to recognize Russia's leading role in resolving the Syrian crisis and resolving the military conflict. Now it is difficult to imagine that any important negotiations on Syria go without the participation of Russia. The adoption of documents at the level of the UN Security Council without Russia could not be imagined before.

Ctrl Enter
Noticed oshЫbku Highlight text and press. Ctrl + Enter
We are
Syria: Bashar Assad comes, and for that he will not be allowed to attend the Olympics in LondonSyria: Americans scare themselves, and Asma Asad buys chairs
27 comments
Information
Dear reader, to leave comments on the publication, you must to register.