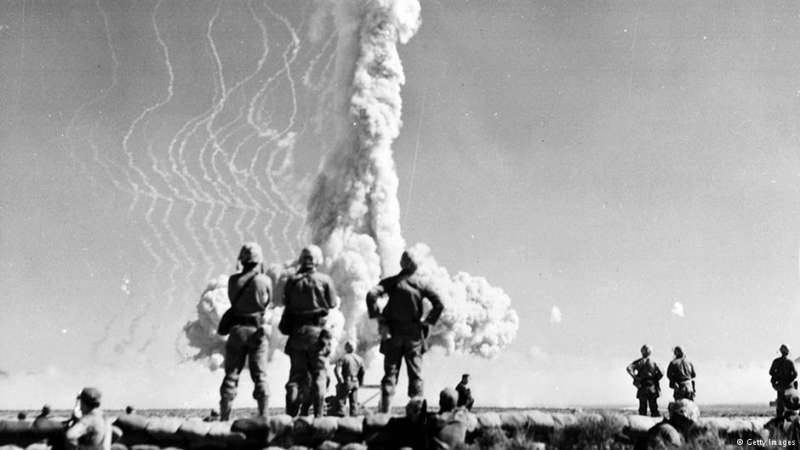 Today’s world, after a rather long period of nuclear disarmament, again, step by step, returns to rhetoric and nuclear intimidation in the style of the Cold War.

In addition to the well-known nuclear tensions on the Korean Peninsula, it seems that the same tensions are returning to Europe. In the context of an international political crisis, in other words, a crisis of confidence, many politicians are not averse to taking up the usual means of intimidating opponents with the help of all sorts of plans for nuclear war.

However, the question arises: is it worth going on about the fear? Attentive study stories nuclear confrontation of the USSR and the United States gives very interesting answers to these questions.

In the days when Washington had a monopoly on nuclear weaponthere were many plans for a nuclear war against the USSR. In 1980's, they were partially declassified and even published, quickly became known to the Soviet reader, because in the party press they quickly picked up these plans for a nuclear war as an argument proving the incurable aggressiveness of American imperialism. Yes, indeed the first plan of the US nuclear attack on the USSR was developed in September 1945, about two months after the signing of the Potsdam agreements. The countries were still formally, and in fact were allies - the war with Japan had just ended - and suddenly such a turn ...

Nobody forced the Americans to publish such documents, and this suggests that the reason for the promulgation of the old and unfulfilled plans of nuclear war was another. Such documents served the tasks of “psychological warfare” and the intimidation of a potential enemy, that is, the USSR, and, to a certain extent, Russia. The message here is quite transparent: here, look, we always kept you on the spot! It also follows from this that they are keeping even now, developing even more sinister plans. Approximately in this style, the first American plans for a nuclear war against the USSR were commented, already in Russian political journalism, almost always with a greater or lesser degree of fear.

At the same time, they write very little about the fact that these remarkable plans for nuclear war were very difficult to implement, and the Americans, even during the Berlin crisis of 1948, refused to use nuclear weapons themselves, just like weapons in general.

At the time of the Berlin crisis 1948 of the year (in the Western literature known as the “Blockade of West Berlin”), the United States had a ready plan for a nuclear war with the Soviet Union. This was the Broiler plan, which included the bombing of 24 by Soviet nuclear cities with 35 Soviet cities. Plans quickly reviewed. Approved 10 March 1948 of the year Broiler 19 March already turned into a Frolic plan. Apparently, the revision of these plans was associated with changes in the list of goals.

It was a very tense moment. In March 1948, the United States, Britain and France approved the use of the Marshall Plan for Germany. The USSR categorically refused to implement the Marshall Plan in the Soviet occupation zone. And after heated debates, due to the impossibility of reaching an agreement, the Federal Control Council - the highest body of allied power in occupied Germany (this was before the formation of the Federal Republic of Germany and the GDR) - collapsed. The western zones sharply reduced the supply of coal and steel to the Soviet zone, and in response a strict search of allied trains and cars was introduced. When Western countries put into circulation in their zones and in West Berlin 21 June 1948, the new German mark, SWAG 22 June introduced its German mark, and 24 –25 June 1948, all communication with West Berlin was discontinued. Trains and barges were not allowed through the canal, car traffic was only allowed to detour. Power supply has been disconnected.

In Western literature, all of this is called the “blockade of Berlin,” although in reality these measures were introduced in response to the splitting policy of the American military administration in Germany. The Berlin crisis also occurred due to the refusal of the Western allies to confiscate the property of German concerns that had participated in the preparation of the war. This was their commitment to the Potsdam Agreement. In the Soviet sector of Berlin, in which the largest industrial concerns were located, 310 enterprises were confiscated, and all former Nazis were expelled from there. The Americans returned to the factories of directors and managers who held their posts under Hitler. In February, 1947, the Berlin City Assembly passed a law on the confiscation of property of concerns throughout Berlin. The American commander, General Lucius Clay, refused to approve it.

Actually, the Marshall Plan in Germany was to keep German concerns almost intact, only with superficial reorganization. These concerns were of interest to American investment and profit. Americans were not embarrassed that at the head of factories and plants for the most part remain the same person as under Hitler.

So, there was a very conflict situation. In West Berlin, the supply of food and coal has stopped. Due to the fact that the United States has nuclear weapons, and the USSR does not, the Americans are beginning to consider the use of force.

It was a situation where the American leadership and US President Harry Truman personally seriously discussed the possibility of starting a nuclear war and bombing the Soviet Union.

But nuclear war did not happen. Why? Consider that situation in more detail.

Then in Berlin, the preponderance of forces was on the side of the Soviet army. The Americans had a group of only 31 thousand people in their zone. In West Berlin there were 8973 American, 7606 British and 6100 French soldiers. The number of troops in the Soviet occupation zone, the Americans estimated at 1,5 million people, but in reality there were about 450 thousands at that time. Subsequently, in 1949, the number of Soviet groups increased significantly. The West Berlin garrison was surrounded and had no chance of resistance, General Clay even gave the order not to build fortifications due to their complete meaninglessness, and rejected the proposal of the US Air Force commander General Curtis Lemey about striking Soviet air bases.

The beginning of the war would have meant the inevitable defeat of the garrison of West Berlin and the possibility of a rapid transition of the Soviet grouping to a decisive offensive, with the seizure of West Germany, and possibly other countries of Western Europe.

In addition, even the presence of nuclear bombs and strategic bombers by the United States did not guarantee anything. Mark III B-29 specially modified carriers of nuclear bombs had a combat radius sufficient only for hitting targets in the European part of the USSR, approximately to the Urals. It was already very difficult to hit targets in the Eastern Urals, in Siberia and in Central Asia - there was not enough radius.

In addition, 35 atomic bombs - it was too small to destroy even the main military, transport and military-industrial facilities of the Soviet Union. The power of plutonium bombs was far from infinite, and Soviet factories, as a rule, were located on a huge area.

The American strategist with nuclear weapons B-29B was distinguished by the fact that all defensive weapons were removed from him, in order to increase range and payload. The best fighter pilots would be thrown at the interception of a “nuclear” raid, among them the recognized Aes. Pokryshkin and I.N. Kozhedub. It is possible that Pokryshkin himself would have taken to the air in order to bring down the nuclear bomb bomber, since during the war he was a great expert on German bombers.

So, the American В-29В, which were supposed to fly to the atomic bombing from air bases in the UK, had a very difficult task. First, they and the fighter cover had to grapple in the air with the 16 th air force fighters stationed in Germany. Then he waited for the aircraft of the Leningrad Guards Fighter Aviakorpusov air defense, and behind him - the Moscow region air defense, the most powerful and well-equipped compound of the air defense forces. American bomber after the first bashing over Germany and the Baltic would have to overcome hundreds of kilometers of Soviet airspace, without fighter cover, without onboard armament, and, in general, without the slightest chance of success and return. It would not be a raid, but a beating of American planes. Especially since there were not so many of them.

Moreover: in 1948, US Secretary of Defense James Forrestal found out at the most crucial moment of developing plans for a nuclear war that there was not a single bomber capable of carrying a nuclear bomb in Europe. All 32 units from the 509 Bomb Group were located at their Roswell air base in New Mexico. Anyway, it turned out that the condition of a significant part of the US Air Force park leaves much to be desired.

The question is, was this nuclear war plan realistic? Of course no. The 32 B-29 bomber with nuclear bombs would have been detected and shot down long before they approached their targets.

The Americans a little later recognized that the factor of the Soviet Air Force must be taken into account and even put forward an estimate that during the raid, up to 90% of bombers could be destroyed. But this can be considered unjustified optimism.

In general, the situation quickly cleared up, and it became obvious that there could be no question of any military solution to the Berlin crisis. Aviation handy, but for another purpose: the organization of the famous "air bridge". The Americans and the British assembled all the transport planes they had. For example, 96 American and 150 British S-47s and 447 American S-54s worked in transportation. This fleet per day, at the peak of transportation, made 1500 sorties and delivered 4500-5000 tons of cargo. Mostly, it was coal, the minimum amount needed for heating and energy supply of the city. From June 28, 1948 to September 30, 1949, 2,2 million tons of cargo was transported by air to West Berlin. A peaceful option to resolve the crisis was chosen and implemented.

So the Americans did not help either the nuclear weapon itself, or the monopoly of its possession even in the situation that demanded and assumed its use. This episode shows that the early plans of a nuclear war, which were in abundance in the United States, were largely built on sand, on a strong underestimation of what the Soviet Union could oppose to air raids.

So, the unsolvable problems were already in 1948, when the Soviet air defense system was far from ideal and only re-equipped with new technology. Subsequently, when a large fleet of jet fighters appeared, more advanced radar and anti-aircraft missile systems appeared, the atomic bombing of the Soviet Union could only be described as a hypothesis. This circumstance requires a review of some generally accepted ideas.

The USSR was not at all defenseless, the situation with the possession of nuclear weapons was still not as dramatic as it is usually represented (“atomic race”).

This example very vividly shows that not every plan of nuclear war, even despite its intimidating appearance, can be implemented in practice, and generally intended for this. Many plans, especially those published, served the purpose of intimidation more than they were actual guidance documents. If the enemy was frightened and made concessions, then the goals were achieved without the use of nuclear weapons.

Ctrl Enter
Noticed oshЫbku Highlight text and press. Ctrl + Enter
We are
Answers on questions. There was no parade in Brest!Nuclear bullying
21 comment
Information
Dear reader, to leave comments on the publication, you must to register.