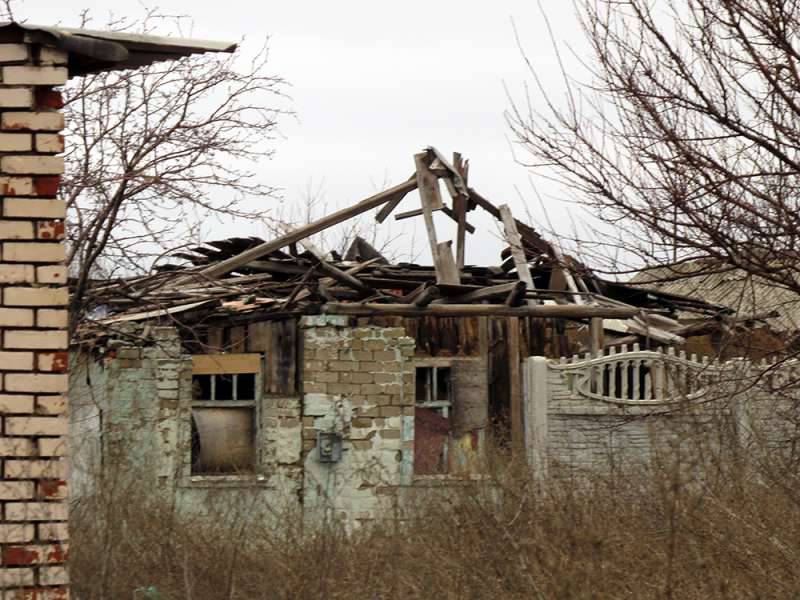 Fatherland Defender's Day - February 23 - was fairly modest in Donetsk, without the traditional demonstrations, which were canceled for security reasons.

Although the Donetsk people remembered the demonstration on that day two years ago - the very day after the coup in Ukraine. In Kiev, the young men — the murderers of the “Berkut”, were then intoxicated with victory and smashed everything that came to hand, and in Donetsk — people went that day not only to celebrate the holiday, but also to honor the memory of law enforcement officers who fell on the Maidan. It was already the birth of what soon turned around historical Russian spring in the Donbass.

As reported from Lugansk, there on the Defender of the Fatherland Day held a festive salute. Unfortunately, he was not in the joy of many - ukroebstrely forced people to fear such loud noises.

But in Donetsk there was no need for a salute - the residents, who were on the other side of the front line, generously “congratulated” the residents on the holiday. In the morning, loud shots from heavy artillery were heard in the north and west of the city. And in the evening, even the residents of the center unwittingly remembered the shelling that was before the notorious “Minsk”. Mines went to areas near the airport, near the Volvo-center, in the villages of Oktyabrsky and Zhabunki. There is also information that the Yasinovatskaya filtering station, which supplies part of Donetsk and its suburbs with water, has suffered.

Unfortunately, the shelling did not go without tragic consequences. As 24 reported in the morning to February, the Deputy Commander of the DPR Ministry of Defense Corps, Eduard Basurin, killed one Republican soldier and two civilians in the Kuybyshevsky district of Donetsk were injured. In addition, the village of Zaitsevo near Gorlovka was also subjected to strikes by Ukrainian artillery - a ten-year-old child suffered there.

Despite the lack of any large-scale celebratory events, the DPR did honor the defenders of the Republic. Several concerts took place at once (one of them was even visited by the famous Russian singer Vika Tsyganova), and other meetings were held.

And a few days before the holiday, a memorial plaque in honor of a simple Donbass worker, who defended his native land and shed blood for it, was placed at one of the Donetsk schools.

I would like to tell more about this story. I could not get to the mourning ceremony, but this random report was born.

It so happened that I was informed that a memorial plaque in honor of the deceased militia would be opened on the wall of School No. XXUM, located on Bogatyrskaya Street. It is near the airport and the village of October.

To the railway station of Donetsk stretches the main street - Artem Street. In the center the view is quite civil. At Miner's Square, the street makes a sharp bend. And in this place and beyond - the traces of shelling are already beginning to be clearly seen. Here and at home, where there are broken windows, sealed with something, and shops with plywood display cases (there is no glass for a long time because of falling projectiles), and here and there there are ominous marks on buildings.

And yet, right up to the train station itself, where Artem Street ends - the view can be called civilized. Moreover, lately a lot has already been restored and repaired.

But it is worth going through the long underpass railway tracks - and a completely different world begins there.

The train station on the side of Artem Street has already been photographed by many, but this is what the building looks like on the other side. 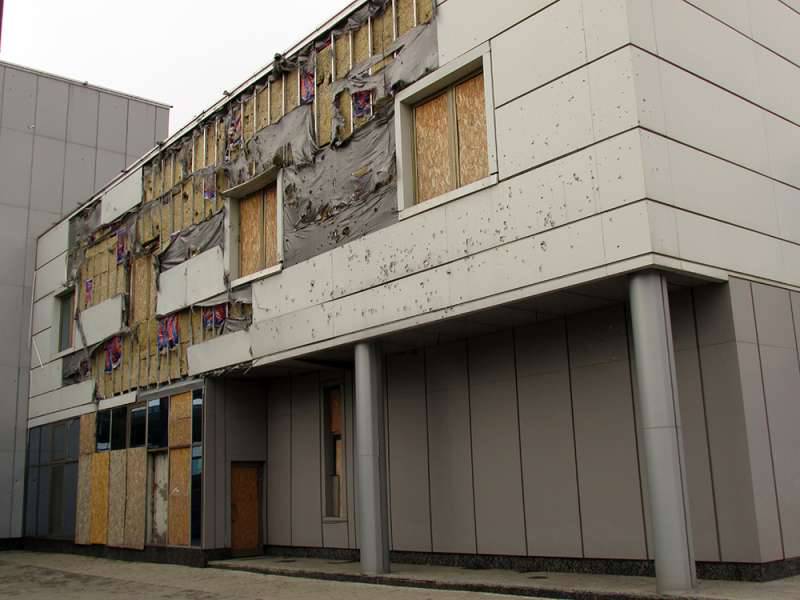 I walk past the private sector, somewhere here and there - the damaged house. There are small shops - but they are all tightly boarded up - it is dangerous to work here. Flocks of feral dogs ... Of the rare passersby - mostly pensioners - after all, the young who could, long ago left these places.

And the closer to the airport - the more these traces of war. 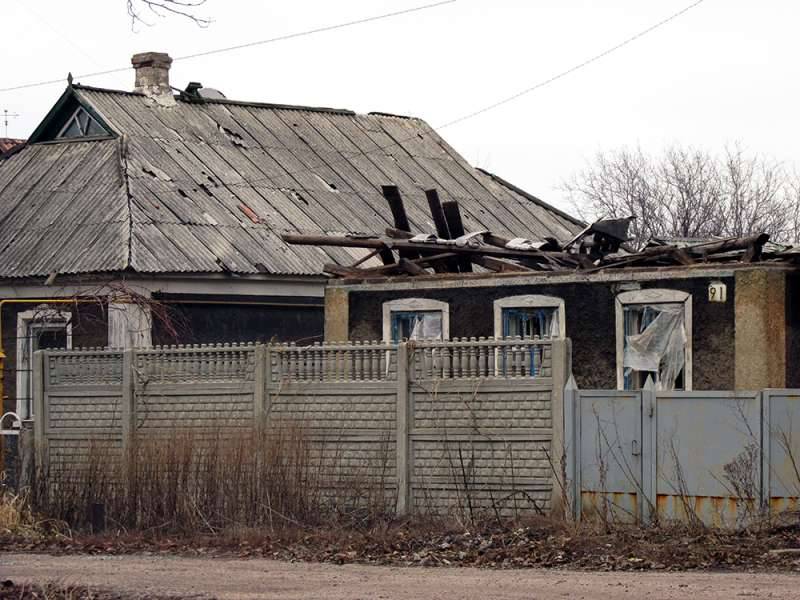 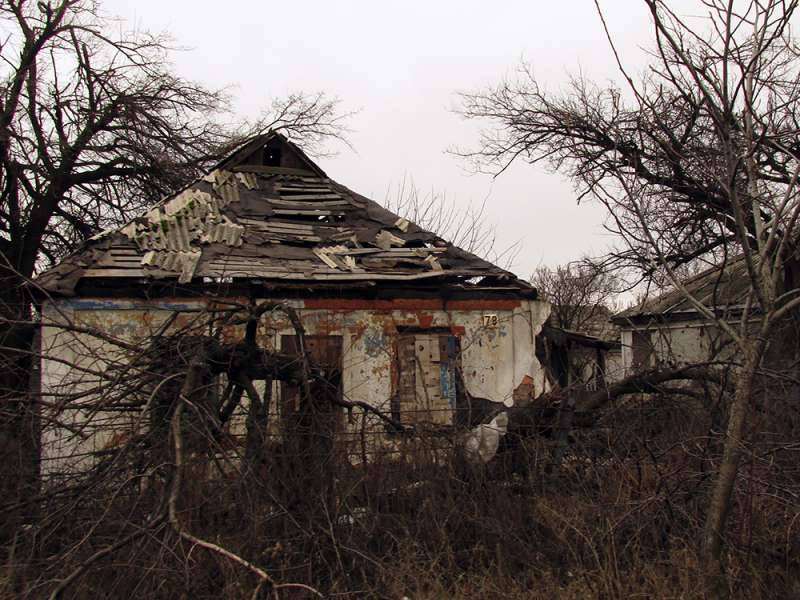 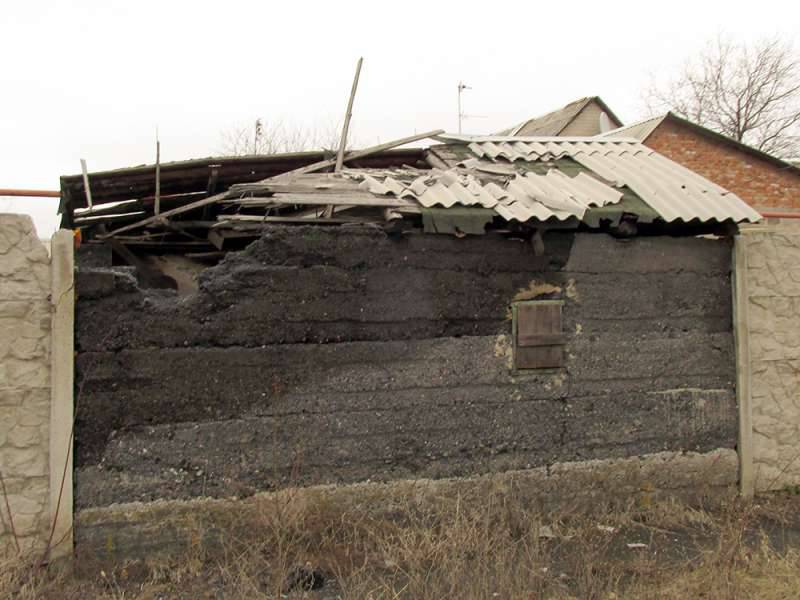 - Where is school number XXUMX here? - I ask one of the rare passers-by.

- What for do you need it? It hasn't been working for a long time, he wonders, and in general, it’s better to leave here faster! Soon it will start! - but the old man showed the way.

Approaching school number XXUMX, I immediately understood: it is unlikely that a memorial plaque will be installed here. And indeed, it is difficult to imagine any mass event here - in this half-dead region. 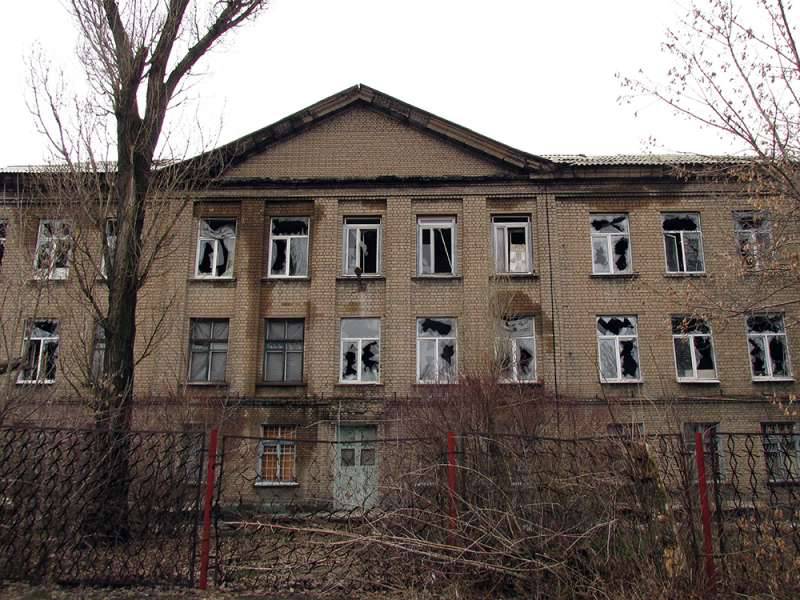 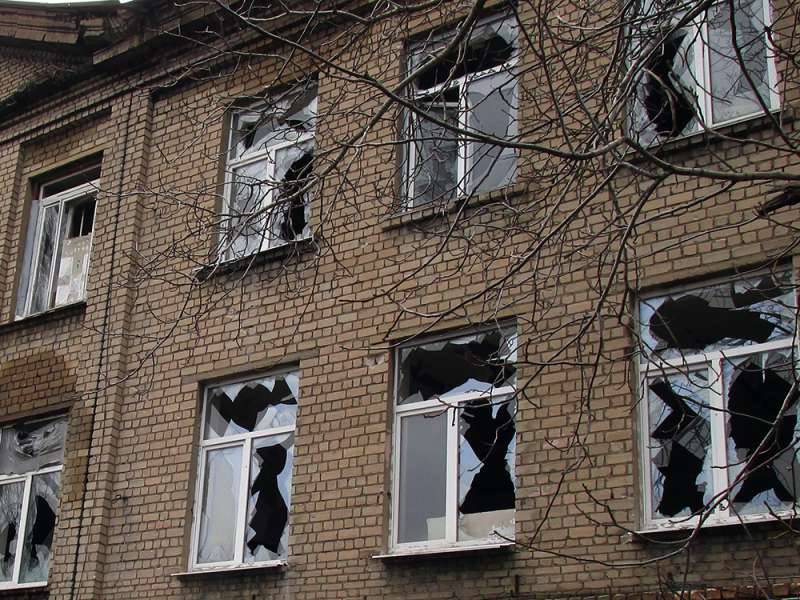 In the school yard there is a large explosion funnel. 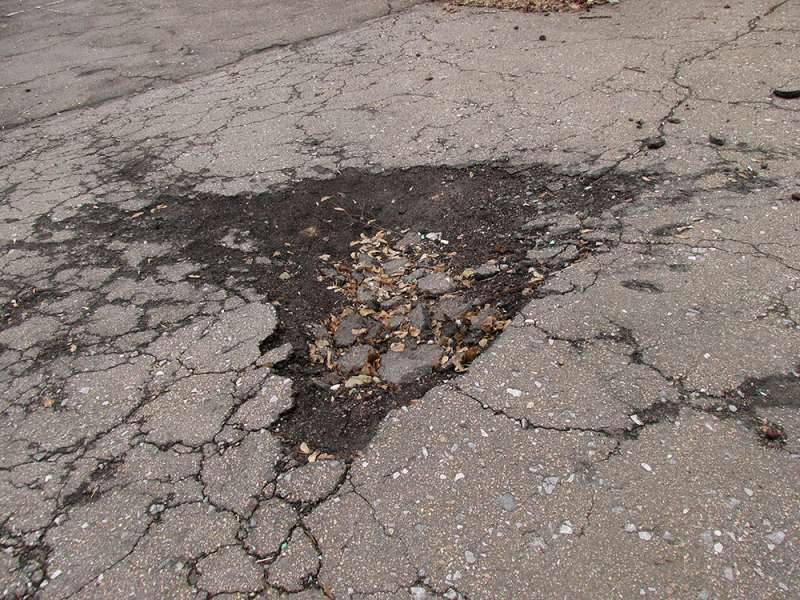 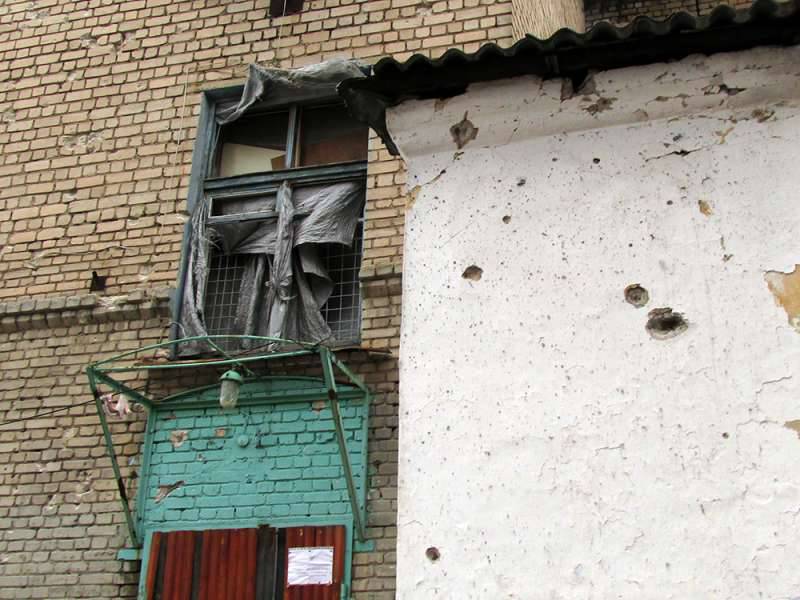 Near the depopulated school, where children's voices are no longer being heard, there is a house. Probably, he was once considered one of the most decent here. 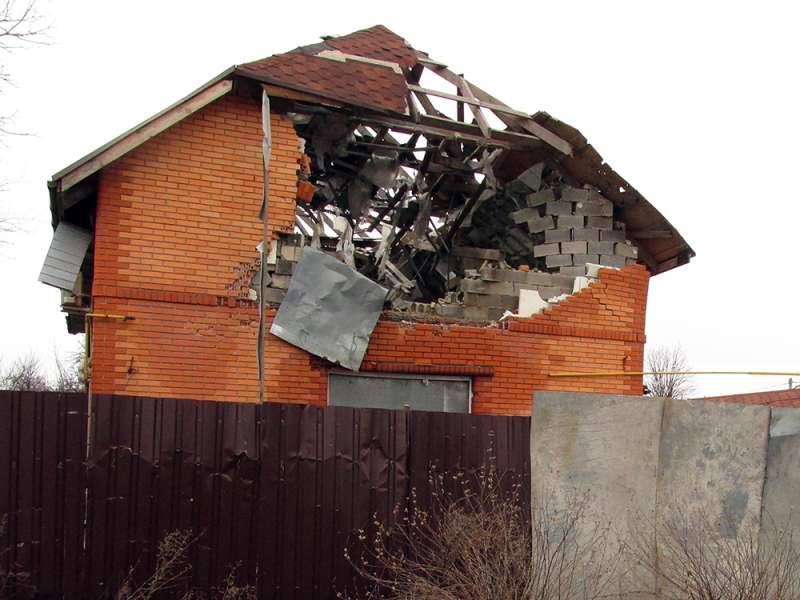 He is from a different angle: 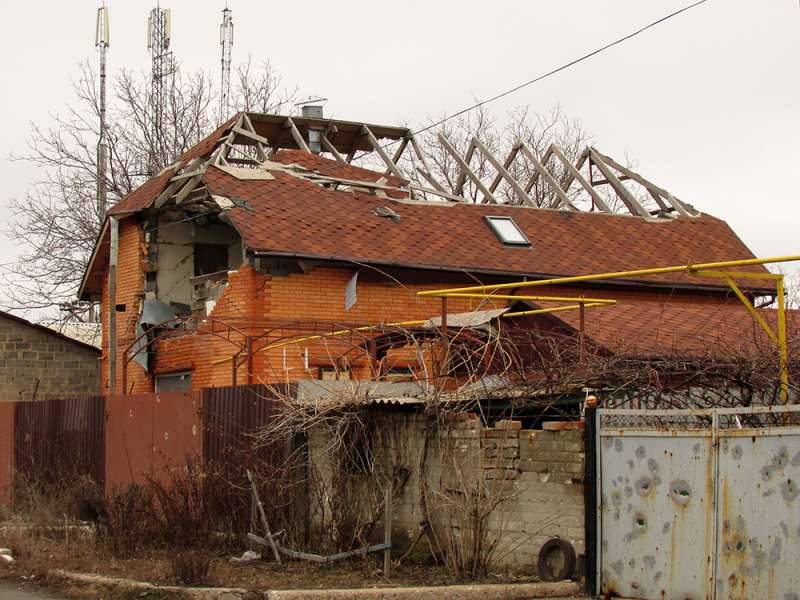 But this house, you can say, was lucky. 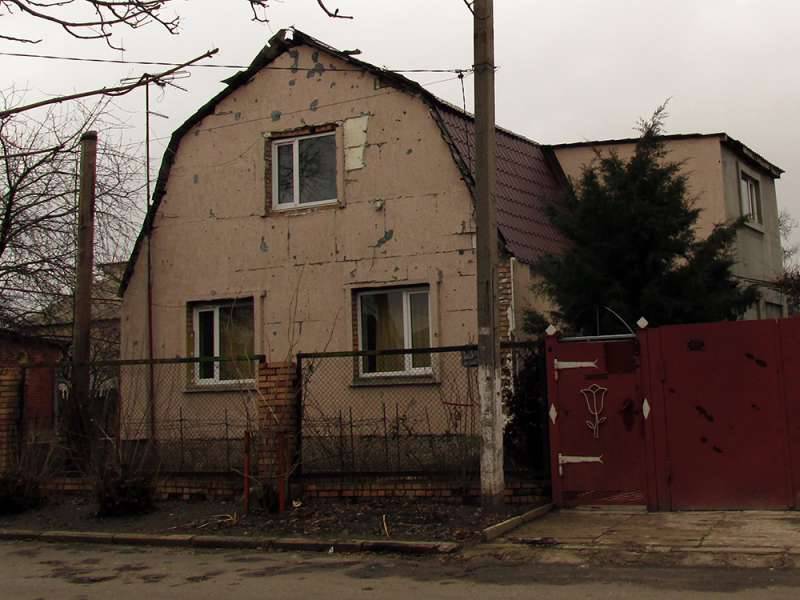 And from here one can see the church of Ignatius Brianchaninov. It is the largest of those that were built in Donetsk after the death of the USSR. She no longer has one of the domes. 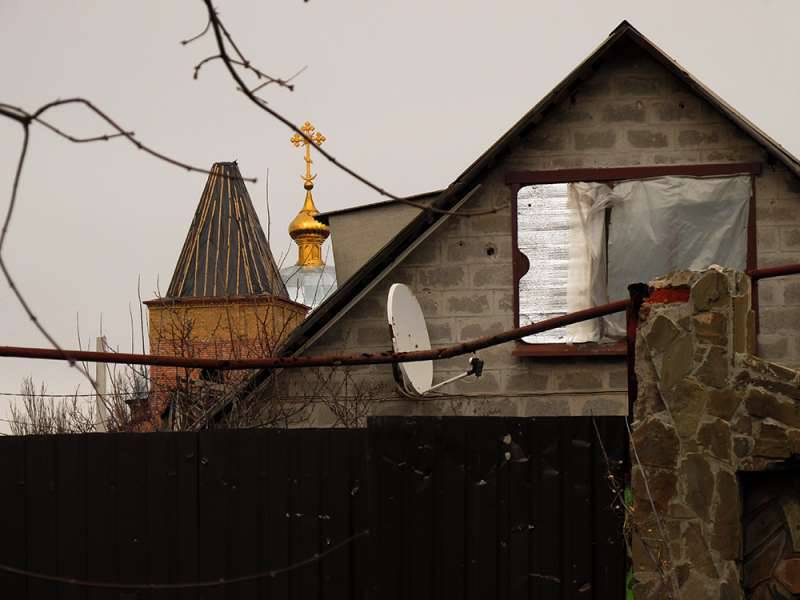 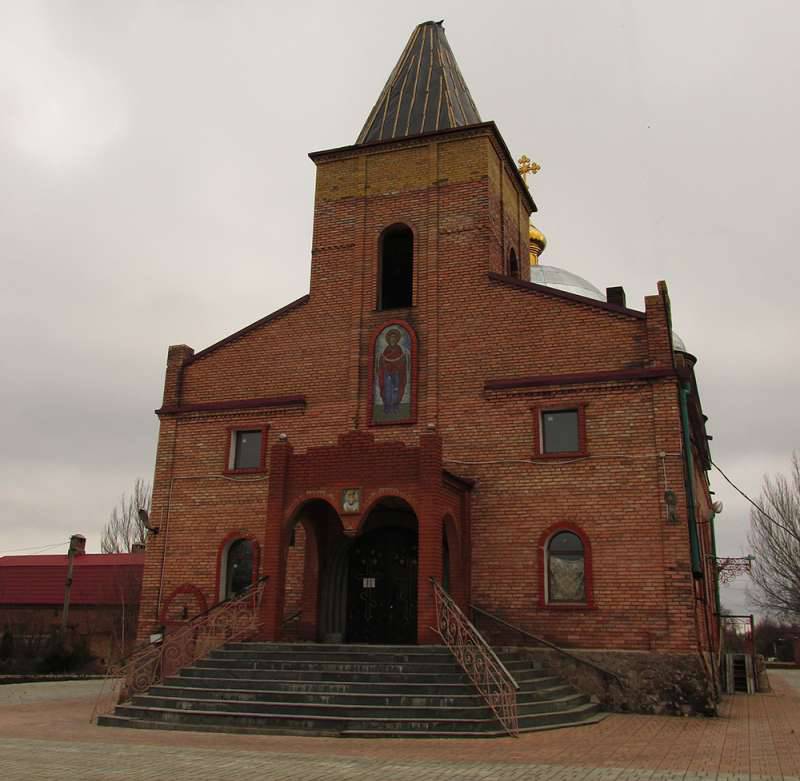 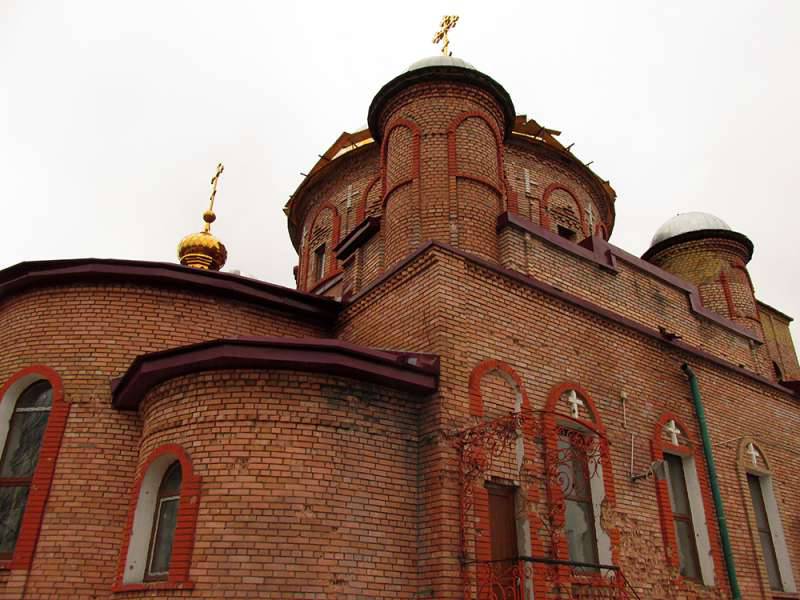 It seems, at first glance, everything else is alright with the church, but it’s worth a closer look ... 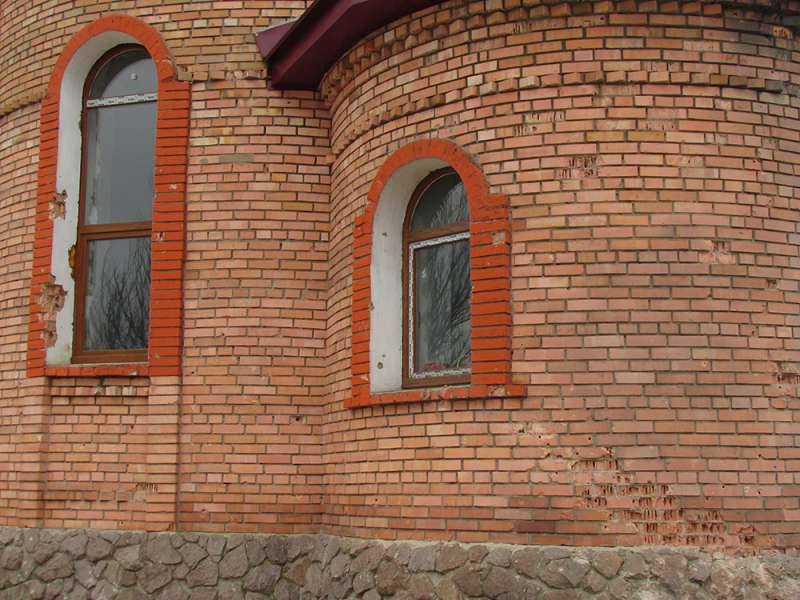 Literally at every step - at home, where it is now impossible to live. 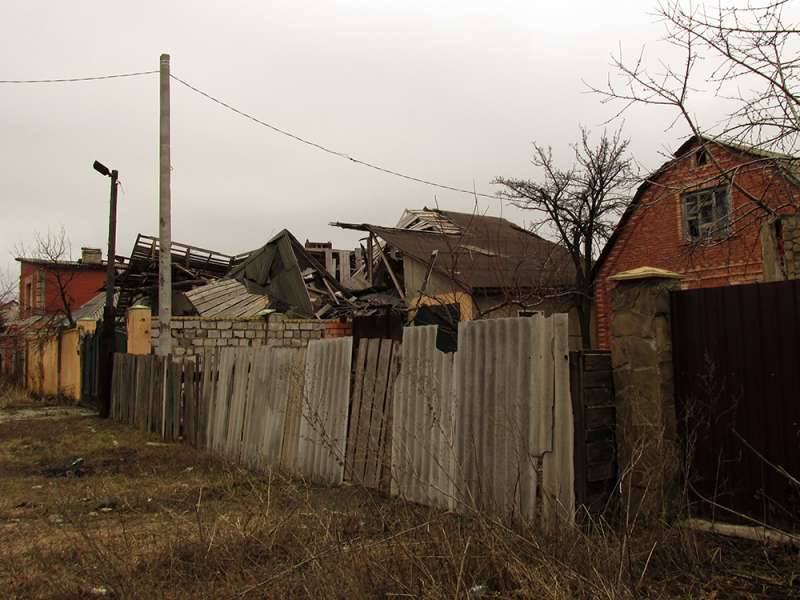 Coming back to the train station. It is clear that I don’t have time to open the memorial plaque - I can only take a picture of it myself.

I was lucky - the forecast of a passerby about the fact that “it will start now” did not come true. However, after a couple of hours, the area still began to fire. And I'm going to a safe Kirovsky district, to school number XXUMX.

And here is a plaque: 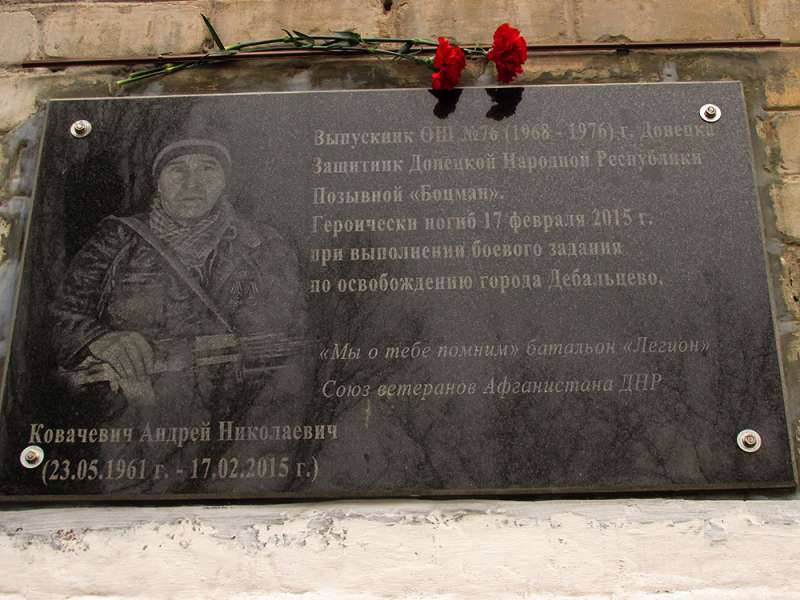 It is installed in honor of the militia Andrei Kovachevich, wearing the call sign "Boatswain. In this school, he studied. Then he worked as a simple worker. And when the time came, he defended his native land.

Andriy fought heroically in the hottest areas - at the airport and near Debaltseve. Honestly deserved the award - George Cross 4 -th degree. And 17 February last year was killed in the battle for the release of Debaltseve. Presented to the highest award of the Republic - Hero of the DPR. (Video from the very opening ceremony of the memorial plaque filmed by journalists of the Ministry of Information, attached).

Defender of the Fatherland Day is a holiday of all who protect their native land. I want everyone to live to win. And so that there were no more destroyed houses, schools with broken windows, mutilated temples, fresh graves. However, for the victory to come, you have to pay with lives such as Andrew. In memory of which this memorial plaque will now remain.

Ctrl Enter
Noticed oshЫbku Highlight text and press. Ctrl + Enter
We are
In Donetsk, a monument to Uncle Vasya was installed, and the ukrokrateli “congratulated” the Donbass on the Day of MetallurgReport from TsNIITOCHMASH. Part I. Weapons and ammunition
11 comments
Information
Dear reader, to leave comments on the publication, you must to register.