Chinese army ordered to begin preparations for war at sea 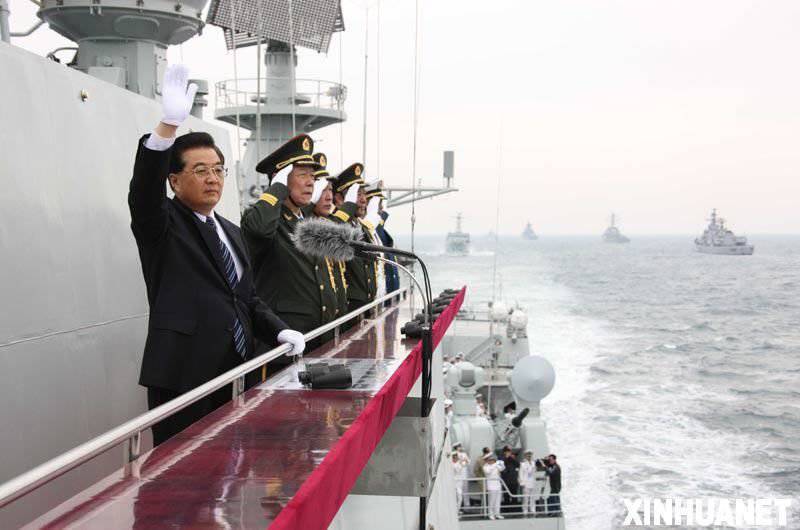 The Chairman of the People’s Republic of China confirmed the long-running rumors about the possibility of a new major military conflict.

The Chinese leader has given unambiguous installations for the naval fleet countries. In his speech at a meeting of the Central Military Commission, he stated the need for "enhanced preparation of the fleet for a possible war," the La Stampa newspaper reported.

Analysts noted some ambiguity that could arise in the translation of the statement of the Chinese leader. In his phrase, instead of “war”, such interpretations as “armed struggle” or “military clash” are quite appropriate, but, as noted by the British television and radio company BBC (BBC), this basically does not change. Among possible reasons for such a harsh statement is a possible dissatisfaction with the actions of Barack Obama, who decided to deploy US Marines in Australia.

In a short time, the Pentagon’s reaction to Hu’s statements also arrived. According to the same La Stampa, George Little, a spokesman for the US military, said that the Chinese have every right to increase their power and implement their military plans. The only condition for which there are constant requests from the Americans, is transparency in Sino-US relations. With this statement, he tried to somewhat lower the meaning of the words of the Chinese leader.

At the moment, according to experts, the power of the American army significantly exceeds the Chinese. Despite the fact that the PRC army is the largest in the world, its main body is ground forces.

However, in recent years, Beijing’s sea ambitions have increased substantially. And significant sums are being invested in the development of the fleet at the moment. This is confirmed by the recent purchase of the former Soviet aircraft-carrying cruiser and its modernization for the modern needs of the naval military fleet. According to experts, China’s military ambitions have grown exponentially in recent years, which is of some concern.

However, according to analysts, China is preparing for a "war" not with America. Among the most probable countries, a military conflict with which may erupt in the near future, are Vietnam and the Philippines. These countries, like the United States, Brunei and Malaysia, have for a long time been challenging the right to several disputed territories in the South China Sea. On the islands for which they claim, there is a high probability of finding oil and gas. In this case, according to observers, it is the United States that has the greatest chances in this matter.

That is why the call for the “strengthening and modernization” of the PRC fleet was voiced before the annual meeting of diplomats of the PRC and the United States, during which negotiations are being held to resolve controversial issues about the impact in the South China Sea. As Vesti noted, the US military is confident that no aggression will be shown towards them by Hu Jintao.

“Rosbalt” reminds of the fact that on October 15 an agreement was signed between Vietnam and China, under which expansion of interaction between the military leadership of both countries is envisaged, in order to ease the tension in their current relations.