Stolen victories of the Ukrainian army 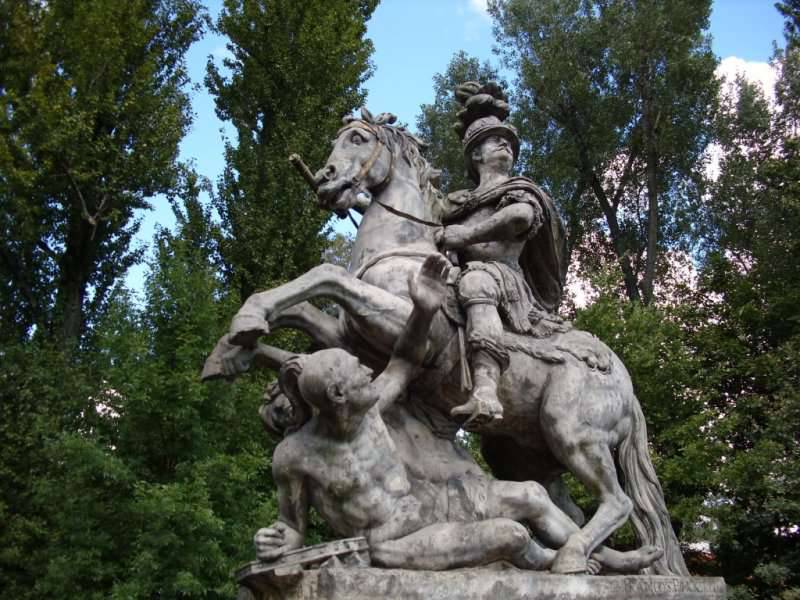 No, this article is not about boilers and other zrads of the modern Ukrainian-terrorist army of avatars, punishers and child-killers. It's about history.

Let's digress from the current situation and our attitude towards the punishers in the Donbas and recall that Eastern Ukraine, together with Kiev, became part of the Moscow kingdom in the middle of the 17 century. 30 January (9 February) 1667 was signed Andrusovo truce, under the terms of which the Commonwealth gave way to Smolensk and Left Bank Ukraine in favor of the Russian kingdom. Kiev was ceded to Poland initially temporarily, then, according to 1686's Eternal Peace, permanently. That is, this part of Ukraine became part of Russia before the creation of the Russian Empire.

What does this mean? The fact that the inhabitants of this region of Little Russians are equal with the Great Russians are the creators of the Russian Empire (which, I remind you, 22 was officially proclaimed October 1721 of October) and have full and inalienable rights to both the general and military history of the empire.

The central part of Ukraine became part of the Russian Empire later, in the second partition of Poland, in 1793. 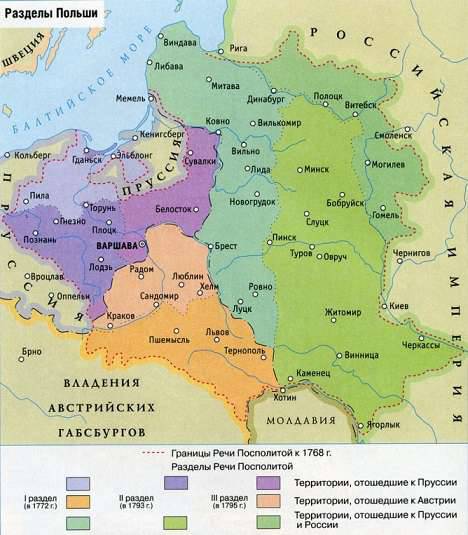 Thus, if we look at the situation impartially, the newly-created state of Ukraine has exactly the same inheritance rights to the military glory of the Russian Empire and the USSR, like the Russian Federation and Belarus.

There were victories for the empire, there were also defeats, but all this was divided equally among all. For, unlike other empires, Little Russia and Belarus were not colonies, but equal imperial-forming peoples, giving armies and generals, and privates, and therefore equally involved in successes and disappointments.

A small digression would be appropriate here.

Due to monstrous historical amnesia, our former non-brothers scream that Peter the Great sneaked into Kiev, the capital of the Russian Empire, and stole its name. After that, the Moscow principality became Russia the next morning, and the former Great Russia awoke in the miserable Outskirts. In the details of the description of this epochal event, the Nebraths differ, but the general meaning of their statement is approximately as follows.

For the rest, I inform you that the name Rus, as applied to the state, the core of which was the Moscow principality, was put into circulation much earlier, as evidenced by the title of Grand Duke Vasily III, father of Ivan the Terrible:

By God's blessing, We, the Great Sovereign Basil, by the grace of God, Sovereign of All Russia and the Grand Duke Vladimir, Moscow, Novgorod, Pskov, Smolensk, Tver, Ugra, Perm, Vyatka, Bulgarian and others, the Sovereign and Grand Duke Novogorod of Nizovsky land, and Chernigov, and Ryazan, and Volotsky, and Rzhevsky, and Belsky, and Rostov, and Yaroslavl , and Beloozersky, and Udoorsky, and Obdorsky, and Kondiysky, and others.

Pay attention to the sequence. First, Russia, then Vladimir, and only in third place is Moscow itself.

And in 1547, Ivan the Fourth was crowned the Russian Tsar, having assumed the title: “Great sir, by the grace of God king and the grand duke All Russia... »

So let the horror film about Peter, the thief of names, remain on the conscience of the person who invented him.

But back to military history.

Below under the spoiler is a list of external military conflicts since the accession of Eastern Ukraine to the Russian kingdom. 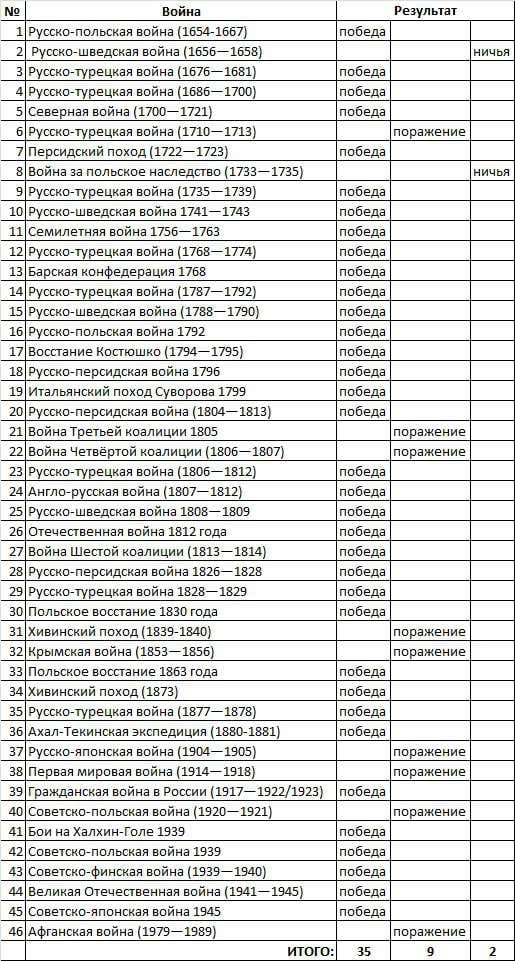 The validity of including wars in the above list, as well as evaluations of these victories and defeats, may be different depending on the scale, results and personal attitude towards them. But overall, the balance (35 wins, 9 losses, 2 draws) is not bad. Otherwise, the Russian Empire would not have taken place as a state. And Ukraine, I repeat, as part of an empire and as a co-founder of the USSR, has the full right to this balance.

It would seem a glorious legacy of glorious ancestors. However, the current Ukrainian leadership, which has a very indirect relationship to Ukraine due to problems with the fifth column, has taken a conscious course to bring the thesis "Ukraine is not Russia" to complete absurdity. If, as it turned out, the Ukrainians were not equal Imperials, but a colony seized by white colonizers, then common victories are no longer common victories. That is, for the Ukrainian Aboriginal people, who, as it turned out suddenly, always fought on the side of the enemies of the Russian kingdom, the Russian Empire and the USSR, all our victories automatically became defeats.

But the irony of fate is that even with such a perverted approach, the defeats of Russia did not at all become victories of the descendants of mythical ukrov. For how the Ukrainians contributed to the defeat of Russia in the wars with Napoleon, the Poles, the Japanese? Yes, no. And since in all these wars ethnic Ukrainians fought on the side of Russia, it’s still their defeat.

Whatever they think they are about themselves, they have not won in:

- Prut campaign of Peter the Great,
- In the Napoleonic wars,
- In the Russo-Japanese War,
- In the First World War,
- Polish war,
- Afghan war.

Even if we take a special case, the Sich Riflemen who fought on the side of the Austrian Empire in the WWI, Austria, too, lost. That is, zapadentsy and here in a deep span.

This is not even zero. The army of modern Ukraine has not just turned out to be in the disgraceful list of countries that have not won a single victory over its entire history. They went into a deep minus with the result of 46 defeats in the wars, in which its people took the most direct and active part.

It cannot be said that in Ukraine they do not understand this at all.

By a decree of 923 / 2009 of 12 in November, President Yushchenko instructed the Institute of National Remembrance to compile a list of the Days of Ukrainian military victories.

I looked for the fruits of this institute’s activity by visiting its official website. I can state that the presidential instruction has not been fulfilled. The site does not have a list of military victories of Ukraine.

I looked for victory just online. They are not from the word "in general". I will not here cite the myths of the Great Ukrainian Talemaster, Doctor of Political Sciences and Professor Viktor Bebik. Those interested can find the heartbreaking story about the exile of Alexander the Great on their own.

In general, the fact remains. The best army on the planet, as they flatter themselves, does not have military victories. Are there still such unique tribes on the planet, or will the army of svidomits forever remain the worst-performing army of all times and peoples?

But this is not so important. It is important that the continuity of generations is extremely important for the education of a warrior. But in the Ukrainian version, than to have such traditions, it is better not to have them at all. And the result was not slow to tell. Svidomye still said his word in the art of war. The look of such an avatar will now forever be associated with the look of a Ukrainian soldier. 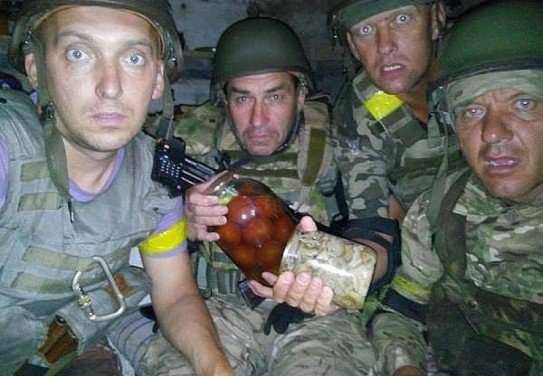 Ctrl Enter
Noticed oshЫbku Highlight text and press. Ctrl + Enter
We are
A great interview with Sergey Lavrov: about Ukraine, Obama and IranMalorussky project: on the solution of the Ukrainian-Russian national issue
127 comments
Information
Dear reader, to leave comments on the publication, you must to register.