February 27 2016
32
“What is 279 KIAP?” - You ask, my dear reader. I decipher: 279 Ship Fighter Aviation Regiment in the village of Severomorsk-3. It was here that we from Olenegorsk went on a bus for an excursion. Initially, our task was this: to participate in the opening of the volleyball tournament, "dedicated to the Defender of the Fatherland Day." Two hours on the road, and leaving Murmansk and Severomorsk behind us, we drove a whole convoy of two buses and several passenger cars assembled along the road into the whole village of Severomorsk-3. The first thing we met upon arrival was a memorial stele from the Yak-38, on the pylons of which there were already four sets of Nurses suspended. There further on with fresh yellow paint the Sports Hall shines, built as a gift to the village and regiment by Sberbank of Russia. For competitions, everything is very compact and good, but with a minimal presence of spectators. We looked at the training of teams and almost lost some of the guests who were sitting on benches along the walls. I myself, filming a training video, barely managed to save my face and glasses from the ball flying into my head. Therefore, after the opening of the tournament, we go to the next point of our tour. 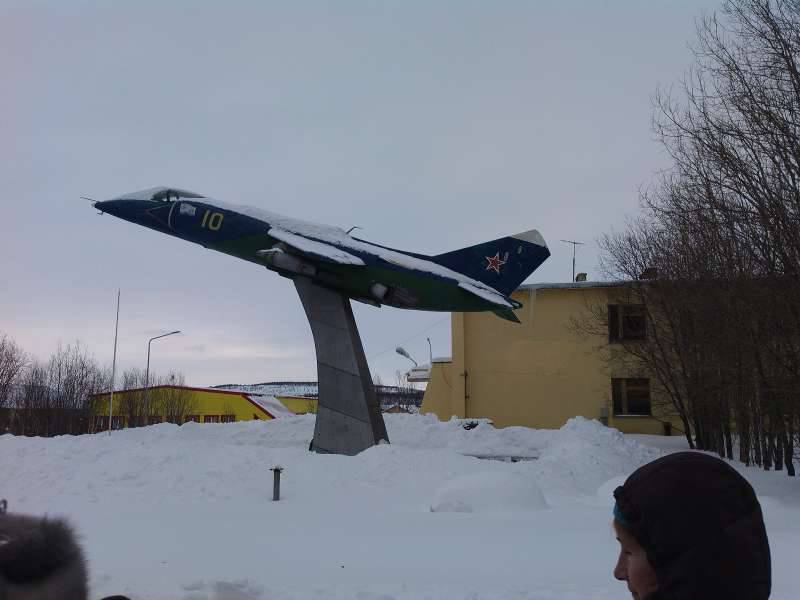 We boarded buses and after a while driving between fells with rare Christmas trees and birches arrived at the “Summer house”, as the sign on the wall reported to the right of the door. I could not resist and ask a person in the form of a technician in the dusk of the corridor: “Is this your“ flight house ”... or“ summer ”house?”. Humor accepted and laughs: "Flight". That is what the neglect of one letter "E" leads to. As you understood, we visited the elite aviation unit. 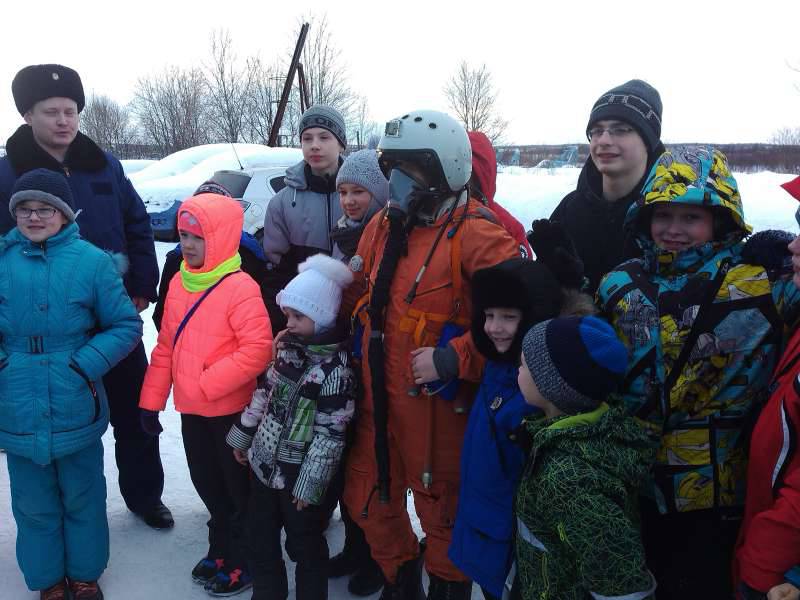 This was indicated by the Su-34 K (ship), with elevator wings raised in front of the flight house, Ka-52 under a tarp, standing in a line. Then there were the Ans - four-motor ones, with whom I personally would like to take a photo, but stood far away and were not allowed to see them. The “Flight House” itself showed traces of the ruin of the “Grobochevsky” period. Although, on the one hand, wooden floors, as I was convinced from my own experience, do not so much accumulate statistical electricity, and this may be important with the equipment that we saw. There was also a small room with two simulators, a full-length punching bag, prefabricated dumbbells, on the middle one there were two circles each with tags in “5 kg”.

For an excursion to 60, a building in which twenty years of repair was not carried out was not enough, and after visiting the wardrobe room with aero-unloading suits, most of them went outside. But one of our mates was nevertheless dressed in full gear, and they began to acquaint us on the street with all the elements of equipment. Even the four holes on the helmet are important - with the ejection they compensate for a part of the blow by the air flow. Between the heads of the children, the folded wings of the Su-34s are visible. 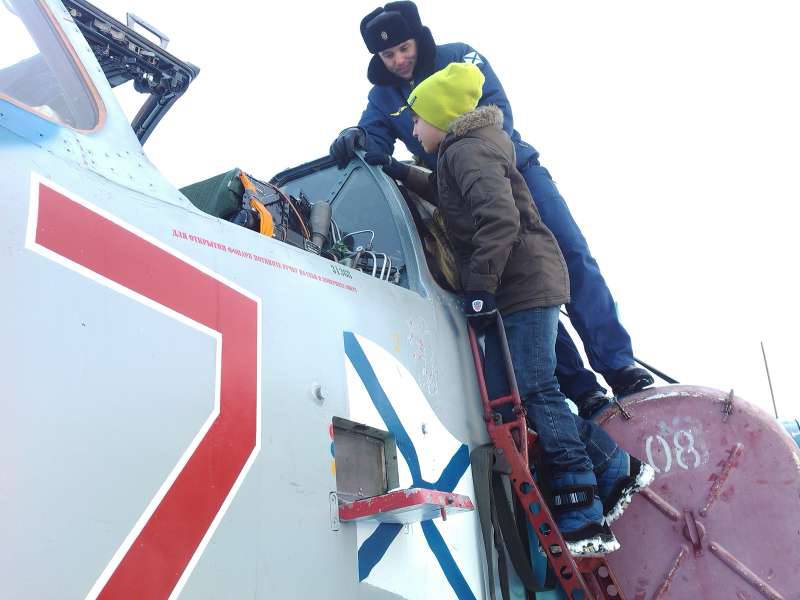 Then we got into the buses again and outside the windows we saw IL-18 in white color or some model improved on the basis of IL-18. Four-engine An-24 and helicopters. We were taken to the other end of the airfield to the repair hangars. Here everyone could get into the cabins of the Su-34K and Su-25K. Only four or five kilometers from the airfield there was a hill, behind which, as we were told, the Barents Sea, and its presence was reflected in a small, but penetrating wind. I was even a little sorry for the techie that helped children and adults to climb into the cockpit of the Su-34K. Delight knew no bounds: "wave your hand to the left, wave your hand to the right." And with might and main worked cameras and cell phones. Apparently, the pilot first straightened out in the cockpit, then threw his left foot over the side and got up on the step, and only then put his right foot on the trap. How much trouble there was to seat the child in the cabin, whose legs were not allowed to do so, like an adult pilot. There were many times when we, the adults, got down from the bottom, ready to grab a girl or a boy, and helped them to find the step with their foot. 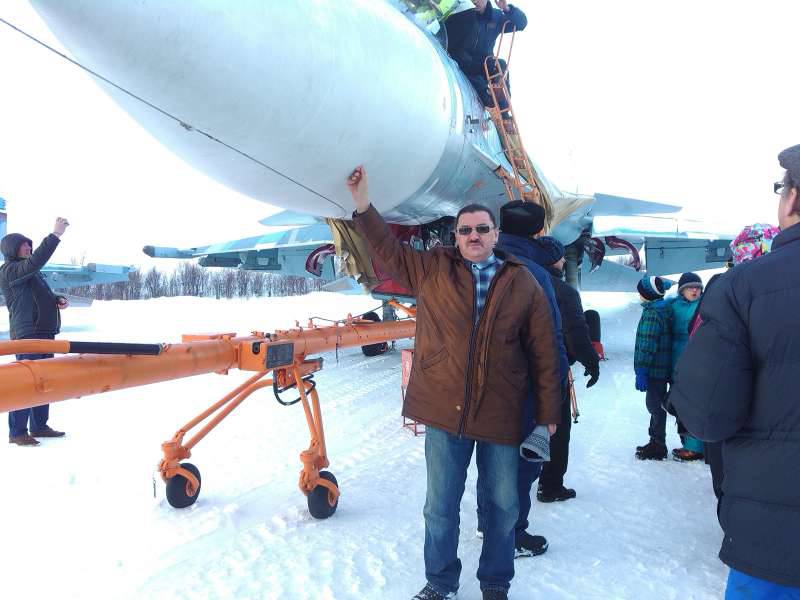 The height of the cockpit can be judged by how I, with 178 height of centimeters, touch the radome of the locator and freely pass under the fuselage of the Su-34K to the middle, closer to the tail it is necessary to duck a little. 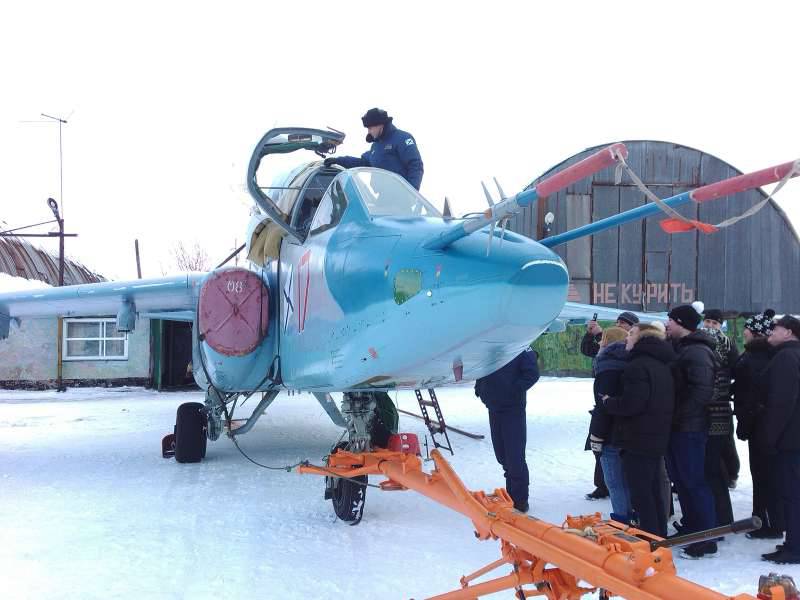 In order to present the progress that our aviation has undergone, we must remember that the dry weight of the four-engine Pe-8 was 18 420 kg., Which is two tons less than Su-34K. Su-25 is one meter longer than Pe-2. 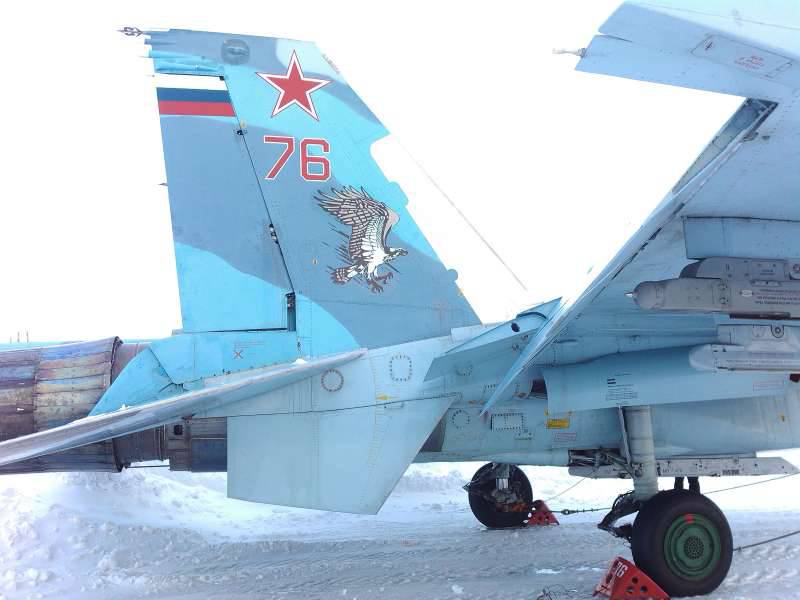 On the tail keel of one of the regiment squadron emblems, the second could not be photographed, but I was told that there was a “tiger” there.

When everyone satisfied their curiosity, we headed back to Severomorsk-3, where the flight simulator was waiting for us. The excitement among children was on the verge of a foul, especially when they were getting out of the simulator cabin. It was possible to observe the “flight” at the operator’s stand. On the right screen at the bottom, a map of the area is displayed, on the central one - instruments in the cabin: in the center are two instruments of height and artificial horizon, the second instrument on the lower left shows the chassis and hook release. We were shown a “hooligan” record, where Su-34, taking off, rises into the air, then, losing height, rushes through two hangars and after landing rolls out of the strip, stops a few meters from the An-12 with running engines. The instructor said that for some tourists the recording produces the impression that they are running straight from the cabin to the toilet.

After everyone went through the simulator ... one of the girls (computer training affects): not only refuel from the IL-76, but also landed on the Kuznetsova deck, with some "jumping", but landed. A large queue for a simulator crushed the group into those who were already “flying away” and those who were waiting. Going to the Sports Complex, they dined buckwheat porridge from the camp kitchen. Everyone who congratulated the fighters "Happy Defender of the Fatherland Day", the sergeant ordered to impose a double portion, which led to the immediate destruction of porridge, and almost all of our ten juvenile tourists who remained in the lineup for the simulator were left without porridge. But it’s not for nothing that the Red Army was famous for the motto: "The soldier will not offend the child." The worthy heirs of the Red Army in two minutes resolved the issue with the colonel on his cell phone, and two soldiers took all our children to the soldiers' canteen. And we made a photo session with our breadwinner. We had to put a couple of plates on the table, otherwise it stands out on the snow with a white triangle. 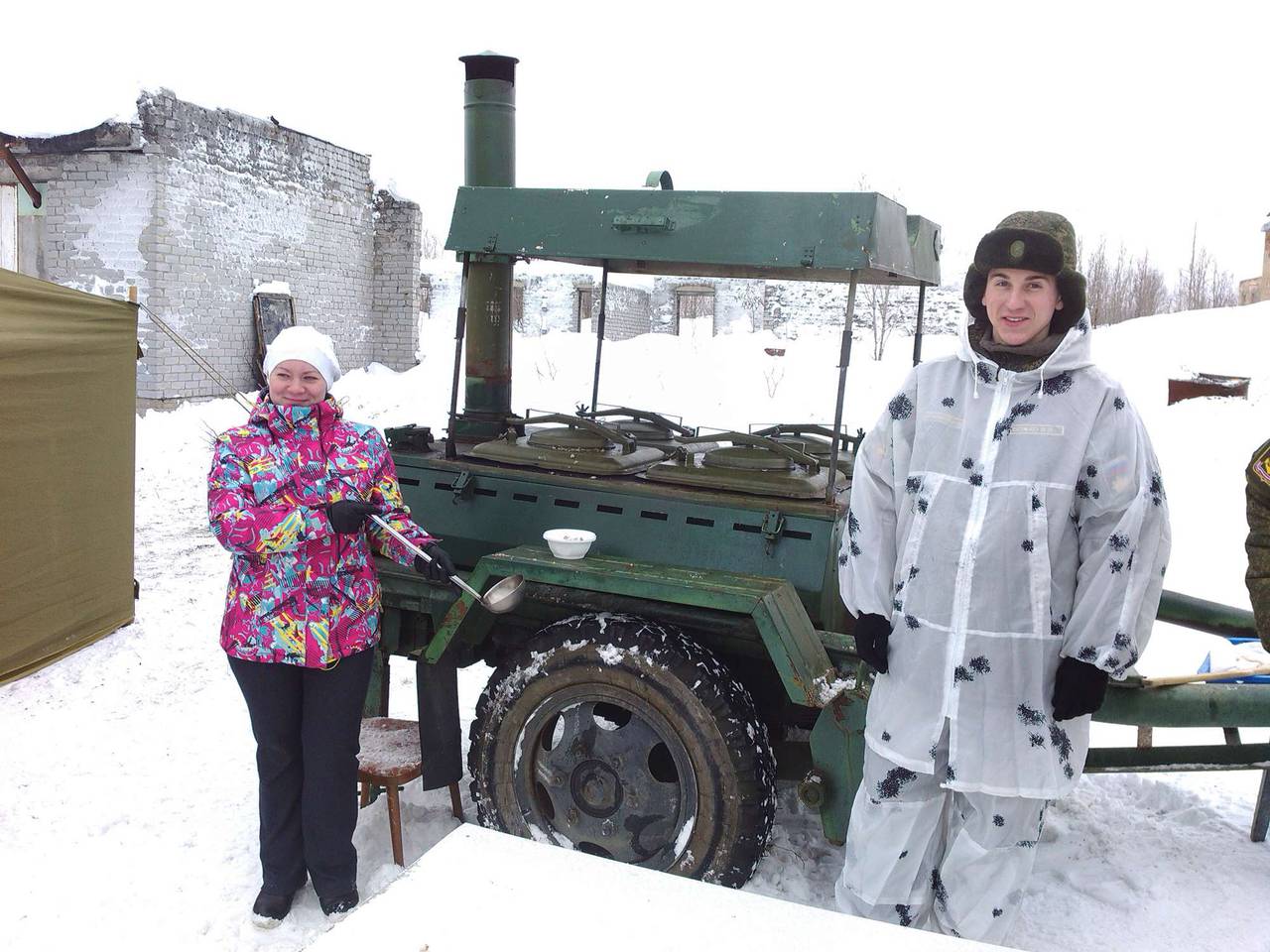 Everything he saw left a very good mood, but there is such a remark to the government: I would like the rooms where our advocates serve to respond to the level and beauty of our equipment. This is, after all, the world elite of all aviation.

Participated in the tour and compilation made Pavel Shasherin.

Ctrl Enter
Noticed oshЫbku Highlight text and press. Ctrl + Enter
We are
An-12 in AfghanistanMiG MFI - experimental fighter
32 comments
Information
Dear reader, to leave comments on the publication, you must to register.