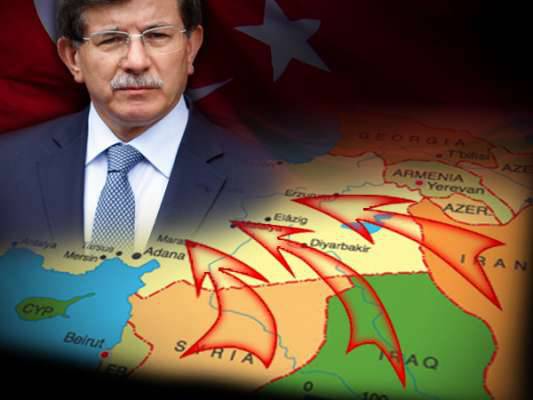 The doctrine of “zero problems with neighbors” was adopted in 2008 at that time by the Turkish Foreign Ministry. Ahmet Davutoglu explained the truth of the doctrine by the fact that the importance of any country is determined by its geostrategic position and "historical depth. " From this point of view, Turkey has a lot of benefits, being at the junction of the most important regions + the Ottoman past played a role. As you know, Turkey is the heiress of the Ottomans, who once united the entire Islamic world. The doctrine is only part of the 1990 postulate on the inseparability of the historical basis and political space. “Zero problems with neighbors” implied non-interference in the internal affairs of other states, however, this is not just peaceful interaction with neighboring republics.

The course involves the expansion of the influence of the Turkish state by three trajectories - political, economic, military, with the ultimate goal - to become a Middle Eastern leader and a transit hub in the region. The goal is based on the imperial traditions of Tayip Erdogan’s policy. And at the heart of these traditions is the “Neo-Ottoman” course. Everything is quite simple and fits into a single thesis - the subordination and control of the Middle Eastern processes. However, neither the imperial dreams of Tayyip Erdogan, nor the doctrine itself was destined to come true. As modern Turkey shows, the program not only did not lead to stabilization of relations with its neighbors, but also reached a conflict-causing peak in cooperation with them. "Zero problems" develops into many problems. What are the reasons?

In my opinion, there are three main reasons:

1) Firstly, the position of the neighbors themselves (according to Turkish representatives). In my opinion, the reason is the least likely, but we will not discount it. It has already become a tradition for the Turkish course to first make mistakes, and then blame the “neighbors” for these mistakes. An identical situation occurred with the downed Russian SU-24, when Turkey was justified before NATO. It is important to understand that no international organization can make such decisions. The decision on SU-24 could be made only by the highest echelon of the Turkish authorities, that is, by the President. This is what Deputy Prime Minister Yalcin Akdogan says: “This concept (meaning the doctrine of“ Zero problems with neighbors ”) was conceived by us as an ideal, as Turkey’s message to the world, as the tone of its foreign policy. We can find a lot of good initiatives of Turkey in respect of Iran, Iraq, Syria. But for a number of reasons, not everything turned out as it was intended. Most often this was due to the position of the leadership of these countries: in Iraq - because of the inflexibility of (former Prime Minister Nuri) Maliki, in Syria - because of (President Bashar) Assad, ”said Akdogan.

2) The second reason is dependence on NATO and the United States. This doctrine has never been to the liking of either NATO or the United States. Here I would like to quote the words of Al-Jazeera’s Munir Shafiq: “The United States always requires Ankara to consistently spoil relations with its neighbors. What kind of "zero problems" !? The role of Turkey, which it assigns in the West, is to be an enemy of the enemies of America. Establishing relations with Iran, Syria, Hezbollah, Russia, Qatar, and against the background of the winding up of a military alliance with Israel, this, of course, has always caused and causes sharp irritation among NATO allies. Turkey instead of its neighbors is now surrounded by regional opponents. Given this, the leadership of the republic is actively establishing relations with the other two states. First of all with Israel. It seems fantastic, but even in the 50 of the twentieth century, the Jewish communities in Turkey enjoyed exactly the same rights as the Turkish nation.

Moreover, Israel was an important economic partner of Turkey, the Jews in Turkey were one of the most prosperous groups. According to political analyst Stanislav Ivanov, the situation has changed dramatically after the appearance of the Justice and Development Party. The party program provided for the revival of the new Ottoman Empire and the Jewish nation, to put it mildly, did not fit into these goals. Since the beginning of 2016, Turkey has also been developing relations with the Saudis, with whom they are united by complicity in the Islamic Coalition. Let me remind you that in December 2015 of the year Saudi Arabia initiated the creation of an anti-Syrian company, which included the 34 states, I note, the Sunni states. The exceptionally Sunni list of countries is due to the growing Iranian activity in the region. As is known, Iran is another neighbor of Turkey, with whom the “politics of zero problems” has not justified itself. As a result, Iran and Turkey are now regional opponents.

3) The third last reason, in my opinion, is that the doctrine is not able to adapt to the current trends of the Middle East. It must be said that the composition of the doctrine was developed even before the processes of the “Arab spring”. So, they did not take into account neither the series of these conflicts, nor all the consequences of these conflicts. The very fact of the “Arab spring” forced Turkey to take rapid-fire steps, leading not a diplomatically thoughtful, but an emotional policy. Tayyip Recep Erdogan is the president of emotions, a leader who builds his power on feelings. His decision regarding Israel (when the ambassador was recalled), inadequate policy towards Russia, unwillingness to grant Kurds autonomy (when the civil war is growing), antipathies towards Bashar Assad — all this is emotional for the Ottoman leader.

What will help Turkey out of the collapse? In my opinion, it is important for the Turkish authorities to cease to be a puppet state, a conductor of the interests of the West in the Middle East, to pursue an independent policy, to become a worthy heir to the great Ottoman Empire, finally!

Ctrl Enter
Noticed oshЫbku Highlight text and press. Ctrl + Enter
We are
Care of the Turkish Jack: on the consequences of the resignation of Ahmet DavutogluMilitary reform as an integral part of the security concept of the Russian Federation: Systematic dynamic assessment
29 comments
Information
Dear reader, to leave comments on the publication, you must to register.