So, of course, it’s about the helmet, and not about the salad, which was called the salad, which was derived from the French salade, and the French language, in turn, came from Italy, from the Italian celata. In German, celata was reassigned to Schaller, and in Spain celata turned into a Spanish cabacete, which later became a cabaret helmet of a completely new look. It is believed that this helmet appeared at the end of the 14th - the beginning of the 16th centuries, and it originates from the bascinet, although it is quite possible that these were simple helmets (ear liners), to which they attached a nazatelnik. By the way, it is the presence of the backstop (the longest of the Germanic samples) that makes the salad a salad, although you can add here a stiffener or “cape” on its front part. Although there are options and special infantry helmets of this type without a visor. 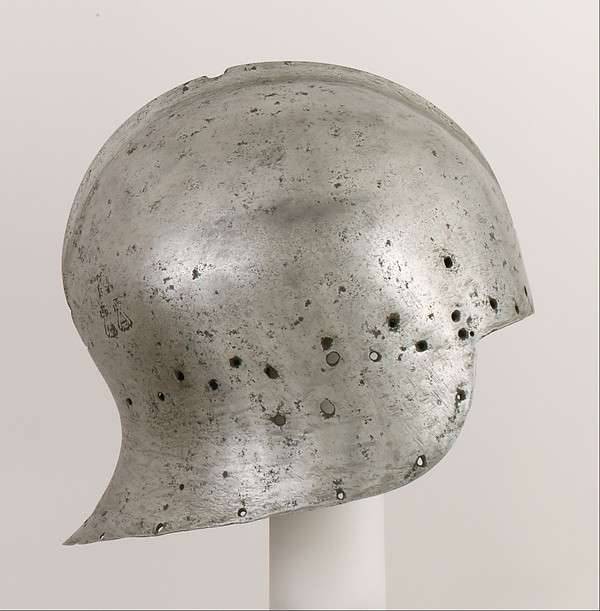 Let's look at the helmets such as sallet and barbute, which are stored in museums and, above all, in the Metrapoliten Museum in New York, which has a rich collection of such helmets. And here we have the simplest helmet sallet or salad, which differs from servilera only in that it has a nazatylnik behind it. This helmet is Italian, produced in Milan in 1470 – 80. and its weight is xnumx


What is the reason for its appearance? Due to the fact that it was at this time that there was a decisive rejection of the use of chain mail as the main means of protection, which came just in the first half of the 15th century. After all, it was then that several new helmets appeared at once: bascinet - “Bundhugel or“ dog's helmet ”in the salle, sallet or salad (a characteristic name for Russian-language literature), which became especially popular with the German knights and gunsmiths.

English historians D. Edge and D. Paddock report that these helmets first appeared in Italy (where they called the selat) and even indicate the year - 1407, when it happened. Then, through France and Burgundy, they reached Germany and England by 1420, and a decade later they became popular in all the countries of Western Europe.

In the design of the salad, the gunsmiths' creative approach to the enhancement of head and face protection, without complicating the very shape of the helmet, very clearly manifested itself. Therefore, he received the shape of a hemisphere, and to observe the slits (or one large slit), and wide fields, able to divert the blows aimed at him to the sides. Well, and then the most interesting thing began: if you put on a ballet, sliding it on the back of your head, like a Corinthian helmet from Ancient Greece, then you can watch it completely free from under it. But in the battle they wore him on the face deeper, and for review they used a narrow transverse slit. At the same time, that part of the face where the nose was, was protected by a special V-shaped projection with which the tips of arrows and spears were thrown to the sides, and not down to the neck. In addition, since the helmet from the bottom was open, it was much easier to breathe in it than in a closed bascinet or a helmet that appeared later. Germanic helmets were very characteristic because of their nazatelnik, which had the form of a long elongated tail; but the French and Italian in their form were most like a bell.

About 1490, another type appeared, which was called “black salle”, which was either painted black or covered with velveteen (also black, although the color of the fabric did not play a role). The shape of the predlichnik, which protruded an acute angle, was also different from other specimens. This helmet was used by horse soldiers, the same French cavalry archers, and knights, and even the infantrymen who had armor. It is clear that the mods are covered with expensive fabrics, decorated with embroidery, and even with precious stones!

True, by the end of the 15th century, helmets of this type had already begun to vary quite strongly in the depth of landing on the head, since the infantrymen, who were deeply seated on their heads, as riders, were not required. Since the lower part of the face remained open when it was worn, it was necessary for the gunsmiths to protect it with the forearm, which covered both the chin and the neck, both at the front and rear, as it consisted of front and rear parts connected to the cuirass. 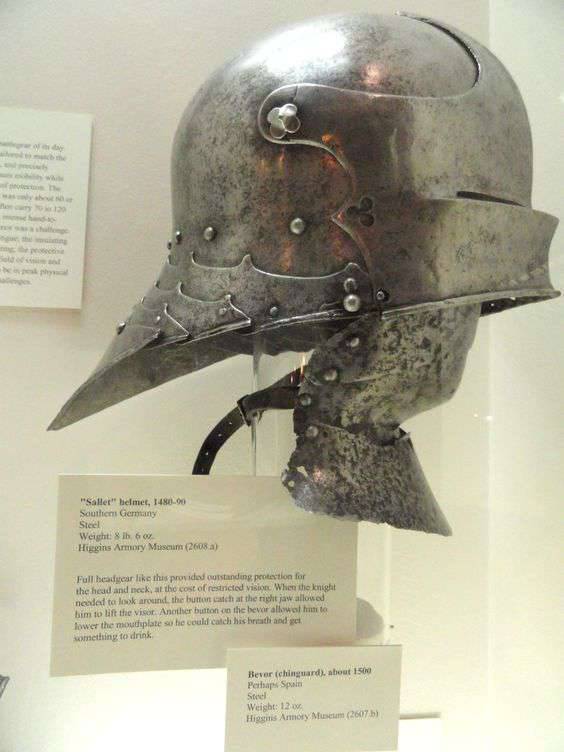 The helmet of the Salad was popular with the infantry and among the knights. The difference was that the latter quite often (though not always) used variants with a small visor, and archers and crossbowmen used variants that left their faces open, and the salads that ordinary infantry wore often had fields that made them similar. on aisenhut - "military hats". But the salads with the fields were in the course of the knights, and the cloth-covered salads with an open face were used as a ceremonial helmet that the knights wore outside the battlefield and as such was very popular. 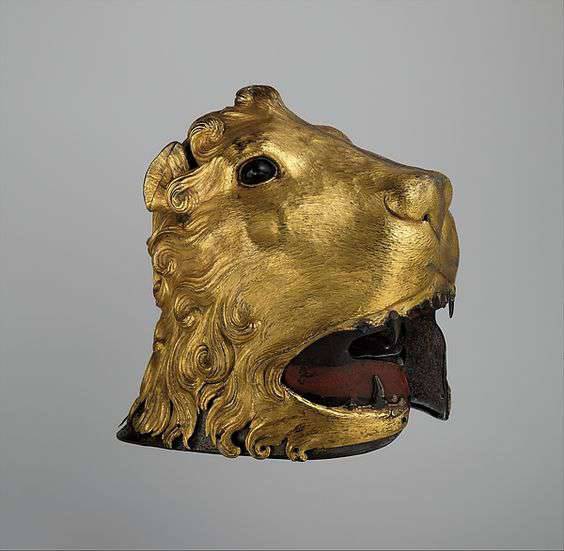 So, having originated somewhere in Italy, helmets of this type gained immense popularity primarily in Germany, where in the second half of the 15th century they became something of a typical German helmet, which became a characteristic feature of gothic armor, which, in general, This is also associated with Germany. Well, and later it was Salad who became the prototype of the famous German army helmet. 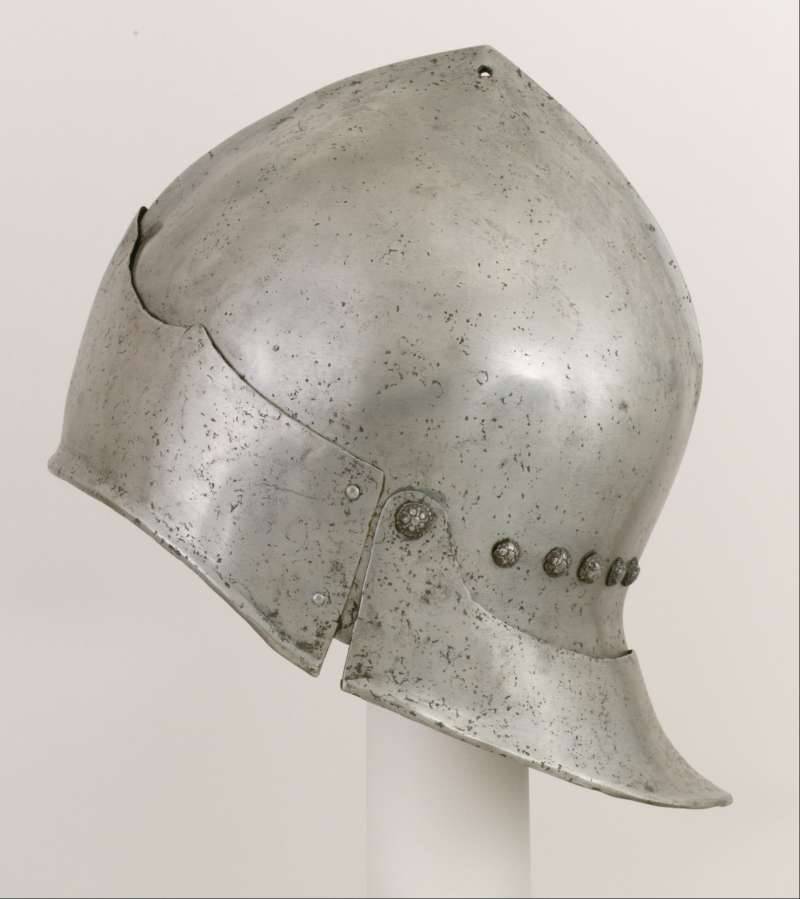 Sallet with a French-Burgundian type headdress of the late 15th century It is believed to be made in Italy. Weight 1737 Metropolitan Museum, New York.

However, in addition to the Salad, which was very popular, both among the most distinguished knights and among the poorest foot soldiers, and a similar история occurred with another helmet, which also appeared in Italy and also at the end of the XIV century, namely, the Barbute helmet. It got its name from ... the beard sticking out of it, because "barba" is "beard." The reason was its design. After all, it was essentially the same "Corinthian helmet" with a T-shaped front slot, in which the beard was just visible! 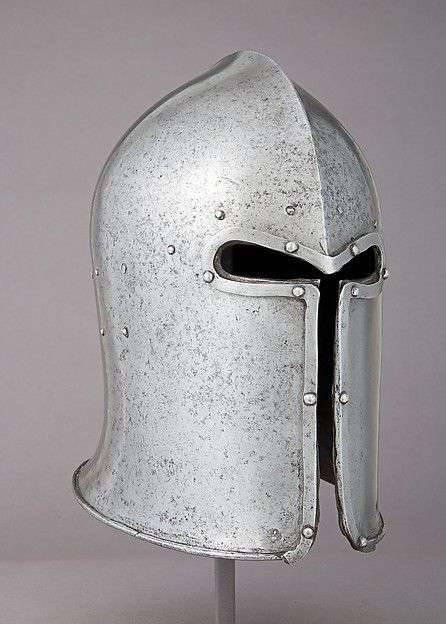 Such a device facilitated breathing and visibility. Such helmets in different versions turned out to be again very comfortable, both for infantry soldiers, and for shooters - archers and crossbowmen, although they were also used by knights. For example, it is the Barbut that is equipped with 1450 Italian armor from the Art Gallery in Glasgow. Such helmets spread very widely in Venice, where crossbowmen and heavily armed Venetian infantry were also most often worn. About this in the book “The Venetian Empire. 1200 - 1670 ”, pointed D. Nicole, who wrote it in collaboration with the famous historian and artist C. Rotero. Interestingly, in Germany, barbutes were called “Italian salad” or “Italian bascinet”. 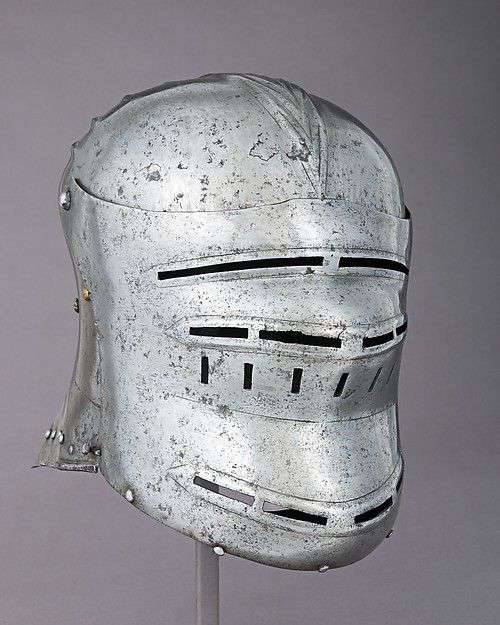 Thus, during the entire XV century. It was Italian gunsmiths who were the lawmakers of military knightly fashion. But it also happened that they themselves included in their armor parts borrowed from German masters, because their customers demanded it. In turn, the trade relations of Germany and Italy, which converged in Flanders, gave impetus to the development of their own production in Antwerp, Bruges and Brussels, from where then cheap armor in large quantities was sold to England. 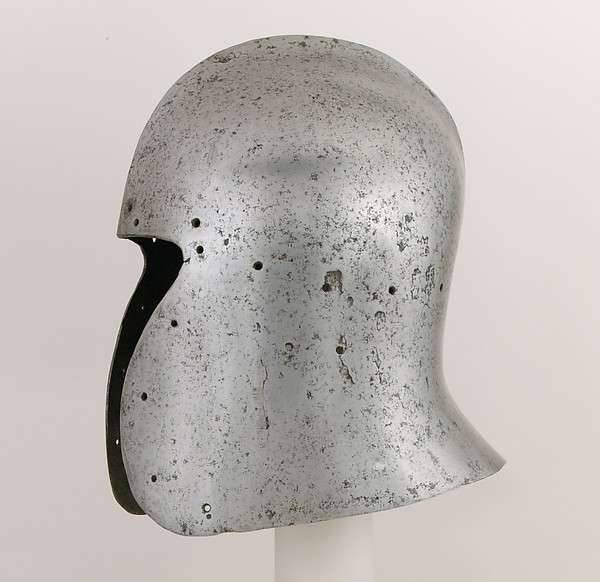 Here, in Holland, the armor of mixed forms became widespread, similar to those that we see today in the picture of the Dutch artist Friedrich Herlin "St. George and the Dragon" (1460), which depicts a knight in typical Italian "export" armor, but in a helmet typical Germano -Italian sample. 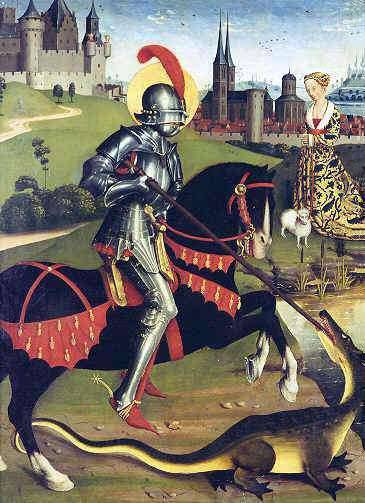