How similar are the 1933 TT pistols and the 1911 Colt, the Shpspina PPSh and Thompson M1A1 submachine guns of the same calibers differ. Conceptually soviet weapon almost all indicators exceeded "Tommy-gan." 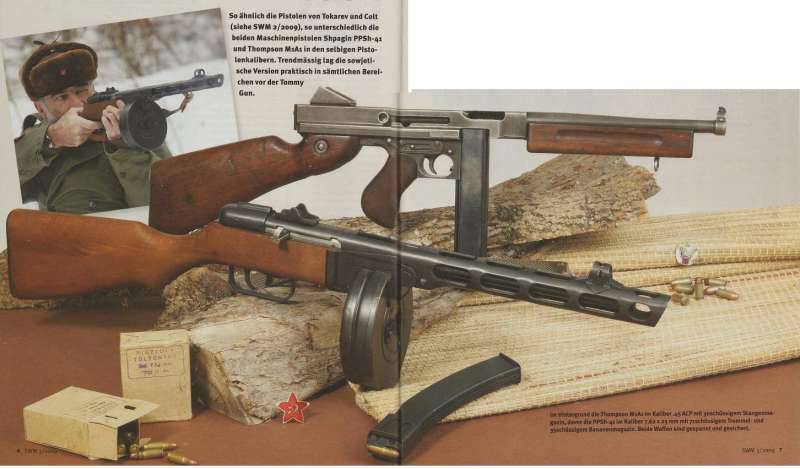 In the background, the Thompson M1А1 caliber .45ACP with 30-charging magazine, in front of the PPSH-41 (caliber 7,62х25) with a drum magazine on the 71 cartridge and 35-charging sector magazine. Both samples are on combat platoon and safety

The first generation of submachine guns originated during the First World War. The goal was to create compact weapons for firing at short and medium distances in a positional war. The United States entered the war late and did not have their own software, and for similar purposes they used Winchester MXNXX Trench Gan pump-action rifles, which were almost as good as PP. Germany was the only country with a significant number of BG Bergmann / Schmeisser MP-1897 caliber 18 Pair. About 9 units entered the army, but the war soon ended. In the interwar period, the development of PP continued in many countries. In America, Auto Ordnance Corp. were manufactured by the design of John Thompson caliber .10000 ACP. The weapon had a semi-free shutter design of John Bliss. The shutter consists of two parts connected by an H-shaped connecting element. The movable drummer is located in the cylindrical extension of the locking part, on the opposite end of which there is a triangular “trigger”, which is actuated by the movable part of the bolt (which also has a reloading handle) at the moment when the cartridge completely enters the chamber. Subsequently, this complex structure gave way to a simple free gate with a fixed drummer, but more on that later.

The first batch of Colt 15000 Thompsons hit the market in 1921. Their characteristic feature is the front retention handle, which in the 1928 on the Thompsons ordered by the Navy was replaced with a conventional wooden forend.
With the beginning of the Second World War, the release of the M1928 model was increased, but they remained very expensive.

The Thompsons, manufactured by Colt, can be called luxurious: they cost 229 dollars, which corresponded to about a monthly salary of a worker. Since the beginning of 2MB, through small changes, the cost has decreased to 209 dollars, by the time the United States entered the war - to 70 and, ultimately, to 45 dollars. A huge step forward, if we consider that almost all parts were made by fur. - processing. Further cost reduction was possible only by introducing a new design, which became the Grease Gun М3, consisting mainly of stamped parts, which the Americans undoubtedly spied from the Germans and the Russians. 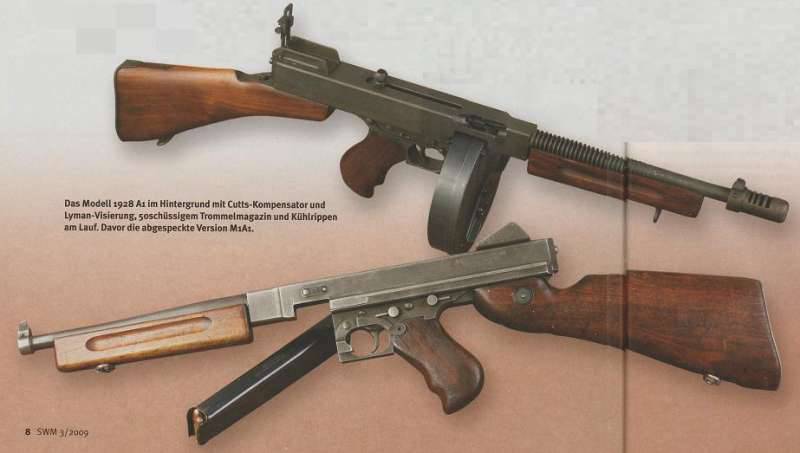 In the background is the 1928А1 model with a compensator and a Luman sight, an 50-charging magazine and a barrel fin. At the front - a simplified version of the M1A1

But the Thompsons have undergone significant changes in order to reduce the cost. Using the models 1928А1 and М1А1 as an example, we will look at how this was achieved. Let's start with a flame arrester - on a cheaper model, it was completely abandoned. This made it possible not only to save a few centimeters of length and grams of weight, but also about a dozen working steps in the manufacture. At the same time, whether the tossing of weapons increased while shooting was another matter requiring special study.

Next - the trunk. He lost his cooling fins. The design of the receiver has also been changed - but this is more likely to reduce weight than production costs. "The course of radical weight loss" had to stand the sight - an adjustable rear sight, consisting of approximately 10-parts, gave way to a stamped piece of tin with a hole-diopter. To protect against damage dioptr protected massive cheeks.

And finally - the butt. On the M1А1 model, it became rigidly fixed to the receiver, while on 1928А1 the butt was removable with a push-button lock. On the change in the design of the shutter, we have already mentioned. In addition, the reloading handle moved from top to right (which apparently did not particularly affect either the mass or the price).

The 50-charging drum shop provided high firepower, but was so heavy, uncomfortable, expensive to manufacture, and difficult to recharge, that the military soon abandoned them. Instead, box shops with 20 and 30 cartridges with their chess arrangement were developed. If with the 1928А1 model both types of stores could still be used - the box-shaped ones were inserted from the bottom, and the drum was pushed in from the side, then on the M1-1 they refused recesses for the drums on the receiver. 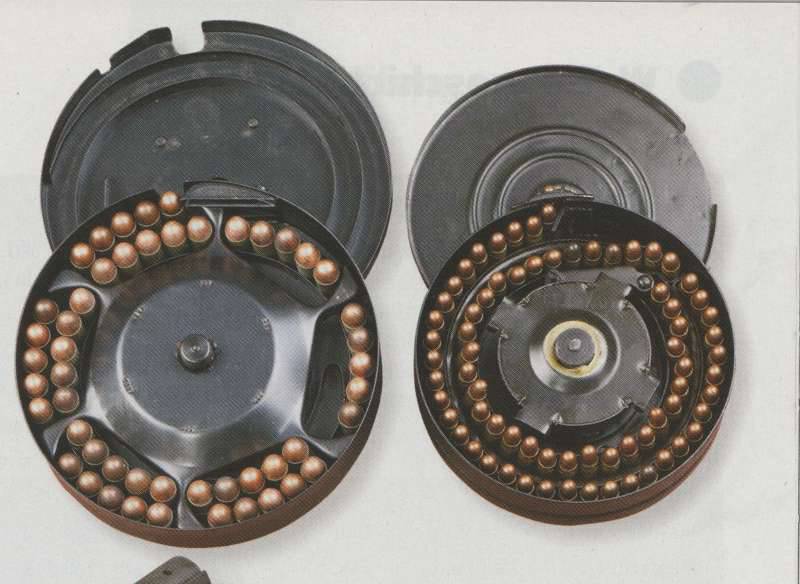 The PPS drum shop has a smaller diameter, but its capacity on the 21 cartridge is larger 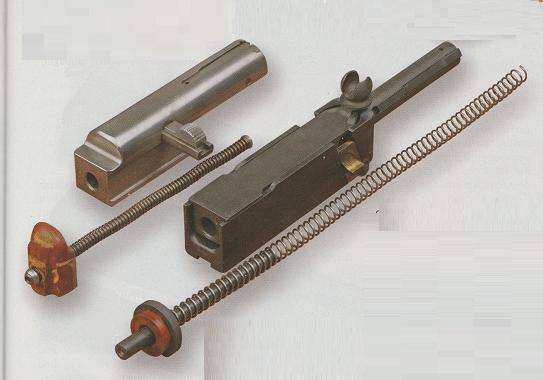 On the left - a PPSH shutter with a reloading handle and a slide guard on it. On the right is the Thompson bolt from 3 details 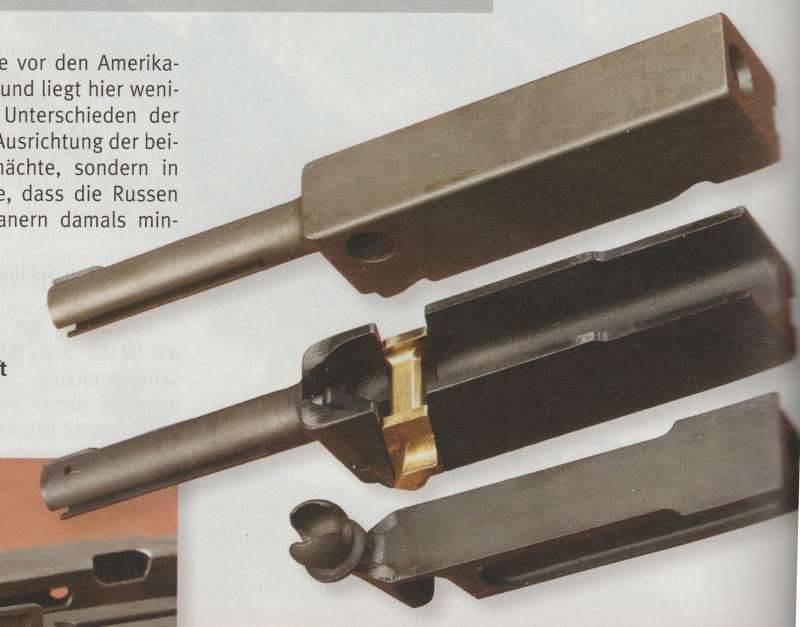 Potential for economy: from above - monolithic shutter М1А1, from below - the initial version of three parts 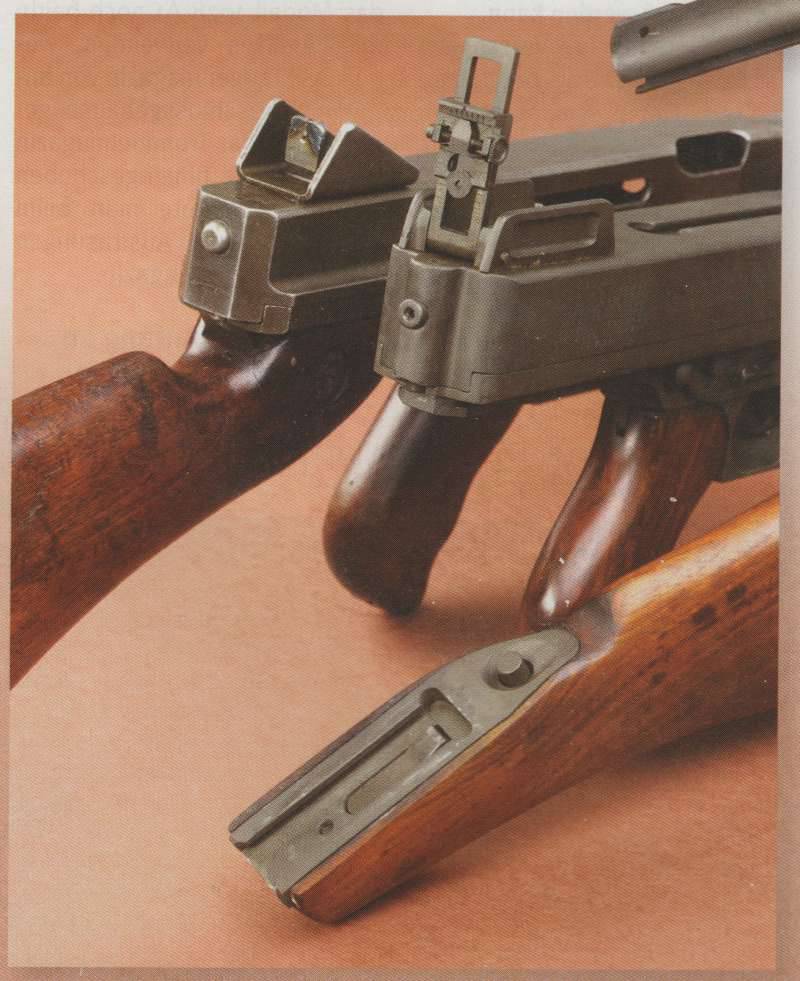 Variants of the Thompson sights and detachable stock M1928А1 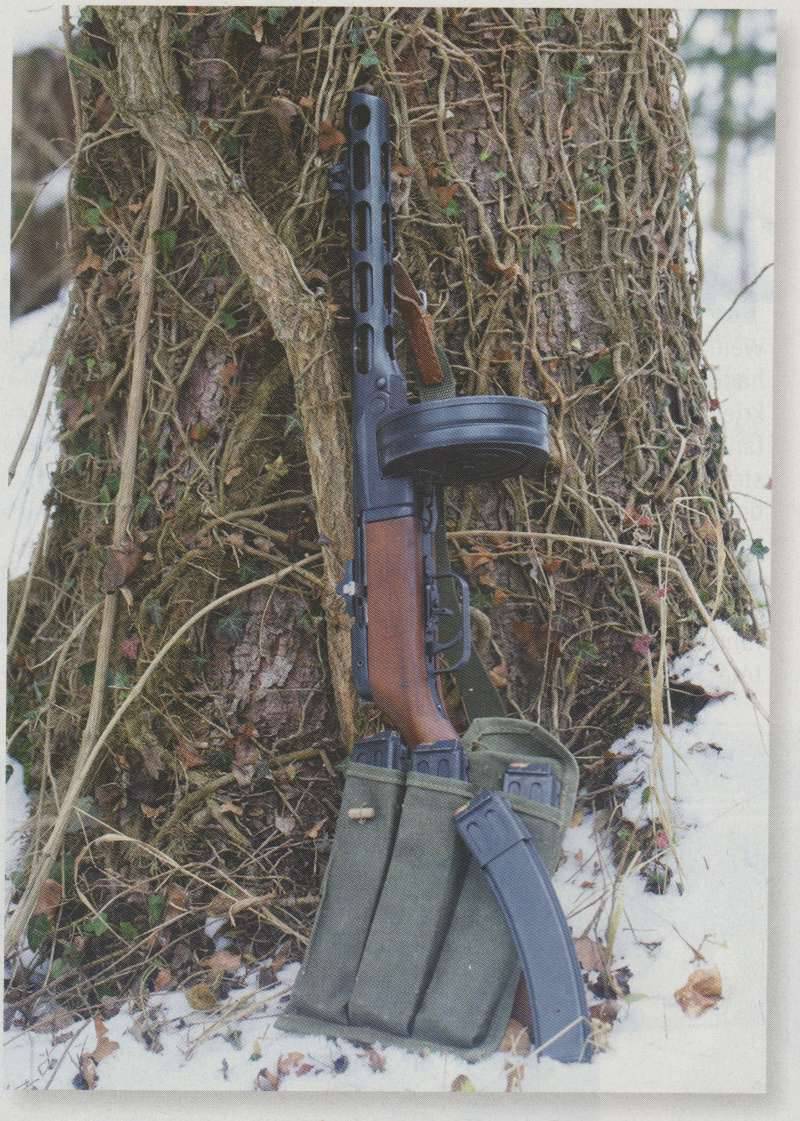 Soviet submachine guns have proven themselves on all continents and in all climatic conditions as an effective and reliable weapon. In the picture - PPSh with full ammunition

If Thomson symbolizes the “American dream” by its appearance, the PCA awakens the images of the Cold War. The “Soviets” managed long before the Americans to create mass weapons. And the point here is not even in the differences of the political system, but rather in the fact that the Russians at that time had a great combat experience. When the “councils” in the 30s developed the PP for the new cartridge 7,62х25, no one could yet know about the future World War II. Their first PP of the 1927 model of the year, designed by Tokarev, also used Nagan revolver cartridges, and this combination turned out to be, to put it mildly, not optimal.

In 1934, the PPN 1934 was adopted. Degtyarev design, which has already undergone some changes in 1938. After the Soviet-Finnish 1939-40 war, they were again refined and got drum shops on the 71 cartridge. With the beginning of 2MB, it became clear that PPDs are not suitable for mass production and PPSH-41 was adopted to replace them.

Its author was George S. Shpagin, for his services to the Fatherland, awarded three orders of Lenin. He managed to rationalize the already fairly simple construction of PPD-40. Shpagin made 95 parts from 87, for the manufacture of which only 7,3 machine hours were needed instead of 13,7. If we compare the salaries of the workers, the PCA was many times cheaper than Thompson.

In total, about 6 millions of PPShs were manufactured, which were also produced under license in “fraternal” countries and were widely used throughout the world until the 60s. The weapon, in fact, consists of a single stamped piece, about 50 long, see, which simultaneously serves as the cover of the receiver, the barrel cover and the muzzle compensator. Receiver, store neck and parts USM also manufactured by stamping. Only the barrel and bolt are machined. 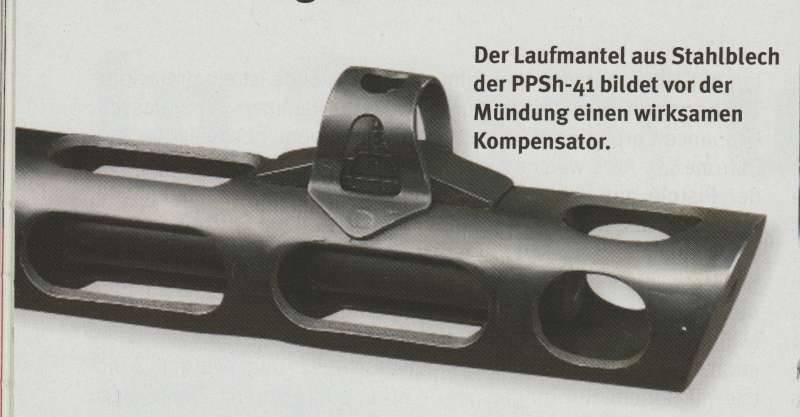 The drum shop, although smaller than Thompson’s, had the same drawbacks, so soldiers at the front preferred 35-sector charge stores. A powerful cartridge and a relatively light shutter mean a higher rate of fire - about 900 rounds per minute. Shooting single does not have high accuracy, as the shot occurs when the shutter is open. Therefore, marking the sight on 100 and 200 meters is unlikely to be realistic. And on the first models the gradation was right up to 500 meters! 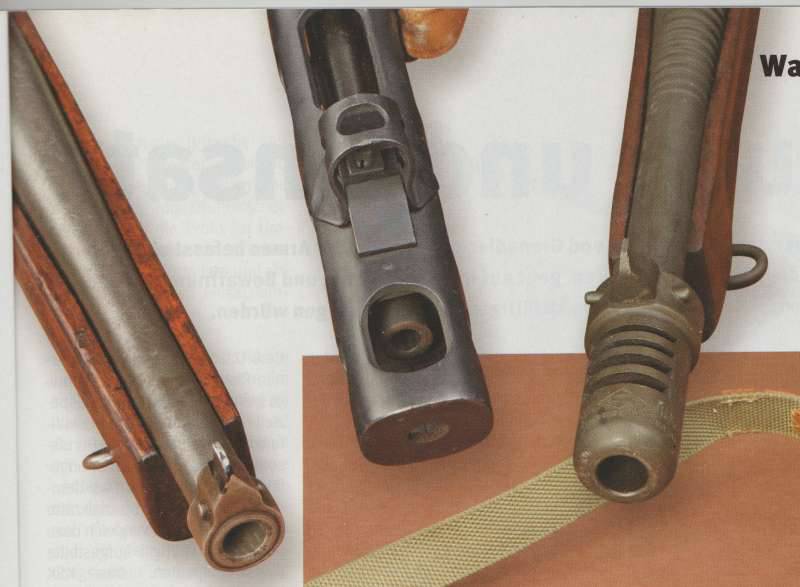 Muzzle slices - from left to right: М1А1, ППШ with a casing - compensator, Thompson with a compensator 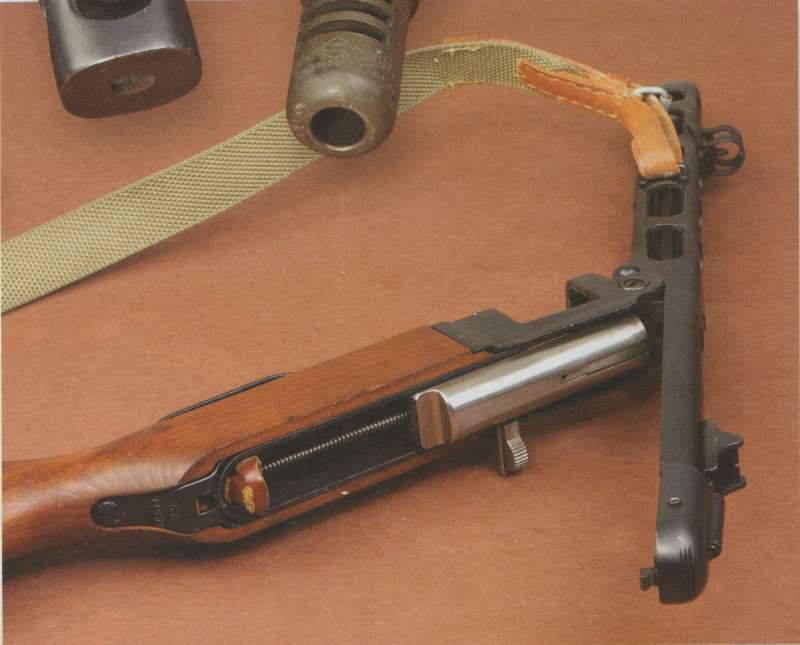 Characteristics of 7,62X25 and .45ACP cartridges (numbers through the slash - for PP and pistols)

In addition to manufacturing technology, it is the caliber that is the main difference between these systems. The Soviets abandoned the .45ACP due to its low penetration and preferred the 7,62x25 cartridge with its light, high-speed bullet with a gentle trajectory. With its smaller mass and volume, the soldier could carry more ammunition, and the stopping power did not play a big role then. If we consider the specific energy, the cartridge TT with its approx. 15 J / mm2 almost 4 times more powerful than .45 ACP. , and the muzzle energy is about 1,5 times higher. But with impulse (IPSC-factor) everything is quite the opposite. On the ballistic properties of ammunition and shooting from both samples we will discuss in the next article. (For some reason, there was no continuation - comment of the translator) 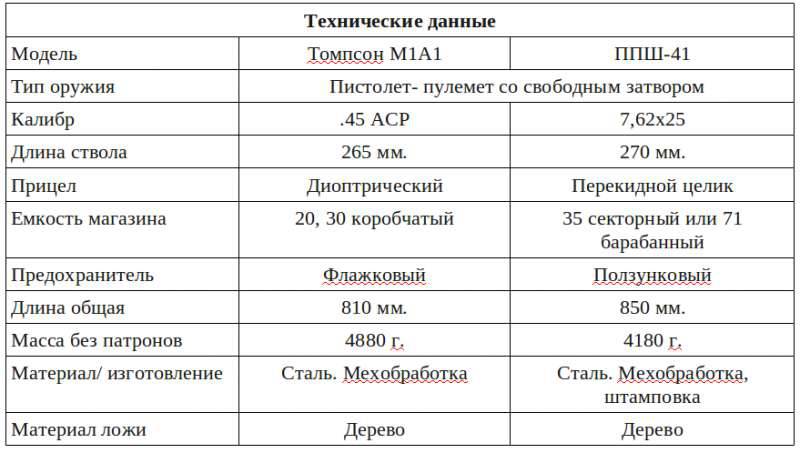 PS Translator's Note (Slug_BDMP)
Of the converted in semi-automatic PPSH shot once.
In general - impressive.
On the one hand, it is very heavy, especially with a drum shop, but on the other, it makes recoil almost imperceptible.
The attachment is comfortable.
Fuse - did not use, so I will not say anything.
The sight is very good - a clear contrast picture.
Descent - VERY tight, but it doesn’t interfere
But loading a drum is entertainment for masochists. In general, I wonder how the fighters did it in a combat situation, but with frozen fingers.
Insert the drum is also not very convenient. Best of all, it turned out, put the weapon on the table with the neck upwards, insert the drum and push the top with your fist. Store latch is also not very comfortable.
Shooting is nice. He shot at a standard pistol target, standing and from his knee. Shot a pack of cartridges - 50 pieces, mostly fast series - all the holes in the "black circle".

Ctrl Enter
Noticed oshЫbku Highlight text and press. Ctrl + Enter
We are
Veteran relativesGW-150: Sniper Rifle for P-26
158 comments
Information
Dear reader, to leave comments on the publication, you must to register.