And this advantage will increase even more when a new ballistic missile RS-26 Rubezh, also developed by the MIT corporation (formerly Moscow Thermal Engineering Institute), will come into service with the Strategic Missile Forces of the Russian Federation (RVSN) of the Russian Federation. As the Commander of the Strategic Missile Forces, Colonel-General Sergey Karakaev, once reported, in 2015, it was planned to complete the tests of this complex, and from 2016, it will be put on combat duty.

However, the characteristics of the PC-26 (in the West, it is assigned the index SS-X-29) at the moment, little is known. According to experts, this is a solid-propellant intercontinental ballistic missile (ICBM) with advanced combat equipment and a divided head (RVS) made using an unconventional method of breeding warheads - the so-called Blue Angels.

In November 1962, the Department of Special Development of the US Navy (SPO - Special Project Office), together with the Air Force, began a conceptual study of the combat equipment for ICBMs and submarine-launched ballistic missiles (SLBMs). Considered two options that differed by the method of breeding warheads.

The first received the Mailman symbol and assumed the creation of a so-called “bus” (Bus) - a platform with a guidance system and a propulsion system, from which warheads were successively separated at calculated points of the trajectory and then made an uncontrolled flight according to the laws of ballistics for specified targets. The advantage of this method was the relative simplicity and the possibility of placing on the platform-bus 10-14, and theoretically even 30 warheads.

The second method was called Blue Angels, and its essence was to equip each warhead with its own propulsion system and individual guidance system. The main advantage of this method was the ability to actively maneuver warheads throughout the flight, including the extra-atmospheric and atmospheric sections. In addition, the possibility of attacking targets along low-level flat trajectories was provided. True, the number of warheads on the carrier with this method of deployment could not be more than four.

From the point of view of rational use of the drop weight and technology of execution, the Bus scheme looks more preferable than Blue Angels. In the latter, as already noted above, it was required to equip each warhead with an individual guidance system, its own multiple-action propulsion system (DU), with fuel and oxidizer tanks.

In the absence of a potential adversary of active anti-missile defense (ABM) facilities in the extra-atmospheric space, the Blue Angels scheme was not that technically unrealizable, but more complex to perform and redundant in its capabilities. Therefore, the first version of the split head became a classic design, and the second one was “laid on the table” for almost half a century.

NEW - THIS IS NOT FORGOTTEN OLD

However, in connection with the intensification of work in the United States to create the National Missile Defense System (NMD), including its advanced frontier, the European missile defense system, Russia decided to create an individual targeting missile based on the Russian-made military targeting technology using the Blue Angels technology, which received the PC-26 index.

A draft design of the new rocket was prepared by the Moscow Institute of Heating Engineering. Its full-scale development began in the 2006 year. In 2008, a contract was signed between MIT Corporation and the Minsk Wheel Tractor Plant to prepare the MZKT-79291 transporter (12 x 12 formula) for a mobile launcher (PU).

This wheel conveyor is significantly smaller in size than the old MZKT-79221 (16x16), created specifically for Topol-M and Yars, and has a slightly lower payload - 50 ton vs. 80, which gave the experts grounds to determine the approximate mass and size characteristics of the new missile: the mass of the launch canister is 50 t, the launch mass of the rocket itself is 32 t, length is 13 m.

Based on the information of the Commander-in-Chief of the Strategic Missile Forces, General Karakayev, that the new missile is not intended for installation in silo launchers (SPE), but only its mobile version was developed, analysts concluded that, most likely, MIT executed the new ICBM SLBM technology. And in the technical assignment there were no requirements for increased shock resistance (like mine or dual-base missiles), since there is no need to withstand a shock load during close nuclear explosions. Consequently, the opportunity to ease the design and increase the throw weight.

That is, the "Boundary" is the one that was promised a few years ago, a unified ICBM rocket based on the Bulava SLBM. From her PC-26 got the first two stages, the third consists of three or four separate stages, warheads of smaller diameter (up to 0,8 m), connected in a package. Each such separate stage is equipped with its own liquid-propellant rocket engine (LRE). First of all, this is the possibility of multiple (albeit short-term) inclusion of the GBI and SM-3 class evasion necessary to carry out a maneuver of evasion of anti-ballistic missiles.

When braking the head parts in the dense layers of the atmosphere to a value less than 3 km / s. The LRE will be activated to give each warhead additional acceleration (increasing their speed to 9,2 km / sec.) In order to overcome the second echelon of THAAD.

One of the main combat features of the Topolis and Yarsov RVSN in service is a sharp (by the standards of rocket technology of previous generations) start. Overclocking lasts less than 5 minutes. Because of this, it is very difficult for the NMD system to fix the very fact of the launch. During this time, these types of missiles will not have time to intercept the missile interceptor of the European missile defense system, even from Poland or Romania.

But in the case of the Rubezh ICBM, the acceleration stage is even less due to the use of high-energy fuel, which was previously used only on SLBMs. It was not used on mine ICBMs due to the high susceptibility of detonation and sensitivity close to a conventional explosive that does not provide resistance to shock overload in a nuclear explosion.

All the above-mentioned properties of the PC-26 allow it to overcome all levels of the American missile defense system. It is not for nothing that Deputy Prime Minister Dmitry Rogozin, who oversees the military-industrial complex sphere in the Russian government, called the RS-26 a “missile defense killer”, implying that neither the existing nor the promising missile defense systems are able to intercept the missiles of this complex.

Meanwhile, the use of the Blue Angels technology allowed the Rubezh ICBM to implement the concept of using low-altitude ballistic missiles (apogee — no higher than 60-80 km) of a flat trajectory at a distance, attributed by the INF Treaty to the distances of medium and short range (minimum range of the PC-26 - 2.000 km, maximum - more than 6.000 km), with the flight time reduced by 40% relative to the “classical” ballistic trajectory. This allows you to use this ICBM as MRBR - a medium-range ballistic missile, without violating the provisions of the INF Treaty.

Military analysts believe that the adoption of the RS-26 and the beginning of its mass production will allow Russia to quickly catch up with the United States in the number of deployed carriers and warheads, which may occur after the decommissioning of ICBMs with expired service life, and derive quantitative indicators of nuclear weapons and means of their delivery to the maximum level permitted by the terms of the START-3 agreement.

Recall that the current Russian-US agreement requires the parties to bring the number of delivery vehicles and warheads to the agreed value by 2018 year. It is by this date that the production and transfer of the Strategic Missile Forces of Russia to the largest number of PC-26 complexes should be expected.
According to the US State Department, at the moment Russia and the United States have respectively 528 and 794 carriers of nuclear weapons. This number includes strategic bombers, each of which is equivalent to a single ballistic missile in the START-3 agreement. On these carriers, the Russians deployed 1.643 nuclear warheads, and the Americans - 1.652.

ON THE "PLATFORM" THERE ARE NO ASSISTANCE

According to media reports, the mass production of ICBMs for the Rubezh PGRK will be arranged at the Votkinsk engineering plant, and the equipment for launchers at the Volgograd factory Barricades. But regarding the manufacturer of wheeled chassis for them the experts had differences. The fact is that since Soviet times, the traditional supplier of such machines is the Minsk Wheel Tractor Plant, and there was every reason to expect to maintain the status quo. 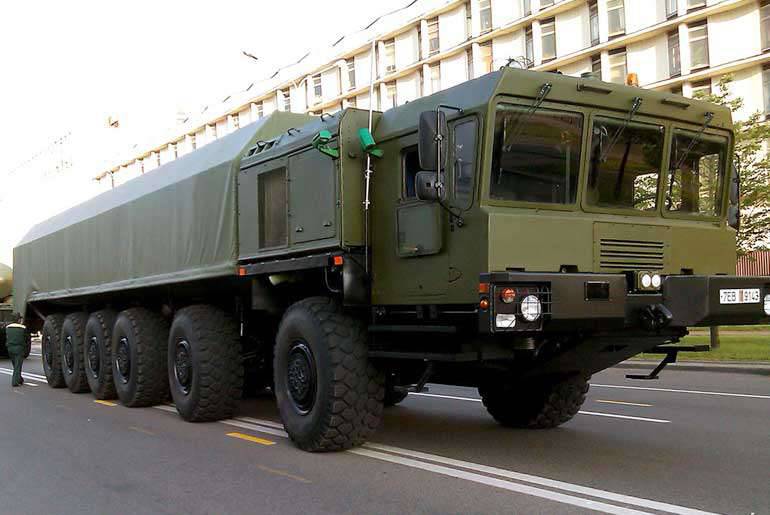 But over the past two years, a whole series of publications has passed in the Russian press stating that the Russian Defense Ministry intends in the shortest possible time to abandon the use of Belarusian chassis as carriers of the latest PGRK. It was argued that these complexes would be located on the chassis of the Platform family developed by the Kama Automobile Plant. In the future, the machines of this family will go into service with all types and types of troops of Russia, and the Belarusian MZKT will lose Russian military orders.

A number of representatives of the expert community began to discuss its consequences of this step for the Minsk plant, and for Belarus as a whole. But while the chassis of the family "Platform" is not accepted for service. So, mobile launchers of Belarusian production are still in demand. 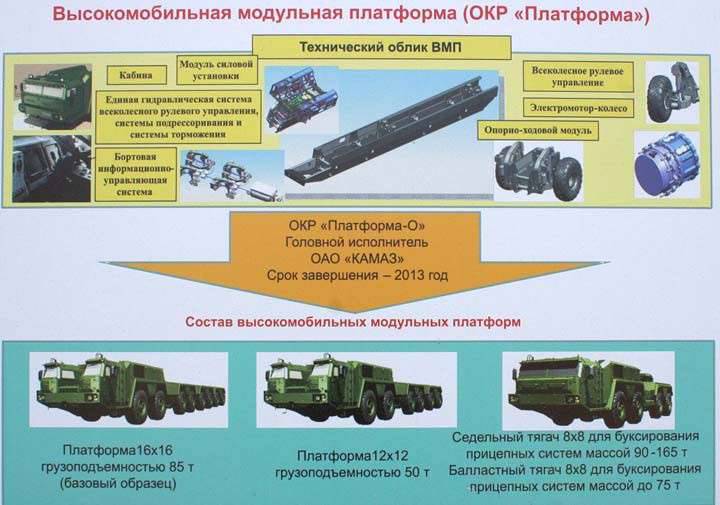 Not so long ago, the Minsk Wheel Tractor Plant at the parade in honor of Independence Day in Minsk presented to the public its new MZKT-79291 chassis with 650 horsepower for an autonomous PC-26 launcher, thus confirming the status of a bona fide supplier and developer of unique vehicles for the Russian army.

Ctrl Enter
Noticed oshЫbku Highlight text and press. Ctrl + Enter
We are
ASV 8 × 8 from Cadillac Gage. Shock and awe on eight wheelsMulti-axle rocket carriers
95 comments
Information
Dear reader, to leave comments on the publication, you must to register.