Who and how did the Kiev Maidan win in 2014 in February, which has caused problems all over Ukraine?

February 20 2016
60
Exactly two years have passed since a coup d'état took place in Ukraine under the pressure of a jumping Maidan. Experts prepared for this event a heap of figures about the fall of the economy, local currency and state reserves, living standards and public discipline. The political crisis of the last week, which destroyed the ruling coalition in the Verkhovna Rada, became the crown of the problems that had fallen on the heads of Ukrainians. 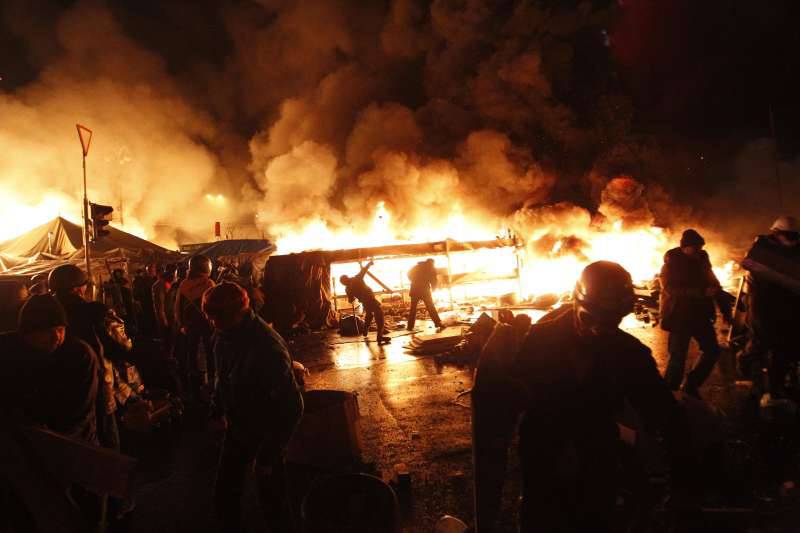 When the wallet is more expensive than the cross

This very coalition, the current Ukrainian Prime Minister Arseniy Yatsenyuk two years ago called the party of winners. Whom did she win in the winter turmoil of 2014? The most common answer is “the gang of Yanukovych.” Viktor Yanukovych and his entourage really became for Ukraine a symbol of bureaucratic acquisitiveness. For a country of Orthodox culture (with its millennial orientation toward communality, mutual aid and attention to neighbor), the passion for profit has always been considered a vice.

That is why people’s disrespectful attitude towards the actions and actions of Yanukovych. Meanwhile, he is eagerly worshiping believers. In 2011, he even made a pilgrimage to Greek Athos. The Orthodox go to this prayerful shrine in the hope that truth will be revealed to them. Yanukovych was looking for her in a conversation with the Athos monks.

According to eyewitnesses, the aged men warned the Ukrainian president that he would retain power only on condition of sincere repentance and admission of mistakes. Otherwise, he will lose his post, and the country will plunge into the chaos of civil confrontation and even war.

Viktor Yanukovych didn’t go to Mount Athos anymore. On the other hand, he often came to the elder Jonah, an Orthodox monk from Odessa, who was revered by believers. One can only guess what the head of state and the pious preacher spoke about. It is better to know the attitude of Iona of Odessa to the turbulent Ukrainian events of recent years. Elder Jonah believed that a spiritual war was going on in the country, the main goal of which was to separate Ukraine from Holy Russia and destroy Orthodoxy in it.

This public position of the elder could not remain a secret from a status believer, with a cross in one hand and a wallet in the other. The wallet, as we see, outweighed everything. Yanukovych did not heed the words of the elder, at least he did nothing for the spiritual world in Ukraine. In the end - he lost, lost the country. The winner declared himself a Greek Catholic Yatsenyuk, along with a motley company.

For two years, people have already looked at them. They know who the Baptist is, who is Greek Catholic, who joined them, and what values ​​the new government has brought with it. However, история This started long before the Maidan.

Greek Catholics returned to the open world from catacomb oblivion in the wake of "perestroika". The power of that time, as if apologizing for post-war oppression, allowed them to enter the Orthodox churches and begin their revenge for the almost half-century underground.

It is known that the Ukrainian Greek Catholic Church (UGCC) compromised itself during the war with the support of Ukrainian nationalists (it even funded the so-called Ukrainian Insurgent Army, the Organization of Ukrainian Nationalists) and cooperation with the fascists. In particular, chaplains for pastoral work were sent to the SS division “Galichina”. Hitler's military also established direct contacts with the hierarchs of the UGCC. Therefore, in 1946, the Soviet authorities convened the Lviv Council, at which they decided to reunite the Greek Catholic Church with the Russian Orthodox Church, and in essence, to liquidate the UGCC.

Such conflicts always arose when Greek Catholics fell into the field of Russian power. The point here is not confessional differences, but the political position of the hierarchs of the UGCC. This church appeared in the Russian period of unrest 16 century. Then part of the feudal lords and the bishops of the Vladimir-Volyn and Lutsk dioceses, in order to equal their rights with the gentry and the Catholics, appealed to the Pope of Rome with a request for union, that is, union.

Despite the protest of most of the clergy, local nobility and parishioners (by the way, the suppressed is extremely cruel), such a union took place. One of its results was the outlaw of the Orthodox Church and the transfer of its property to the Uniate Church, later called the Greek Catholic. The new name was partly forced, because it was not possible to completely break the resistance of the believers. It was a kind of symbiosis in which the recognition of Catholic dogmas and the supreme authority of the Pope of Rome is combined with worship services according to the Byzantine rite.

The political motives that prompted the creation of a new local church became permanent in the actions of the hierarchs of the UGCC. This has been the case throughout its history, including the shameful period of the Second World War, already mentioned here. This was also the case in the recent post-Soviet times, when Greek Catholics began to promote their faith, culture, language and influence in the central and eastern regions of Ukraine - on the primordially Orthodox lands.

With the support of the central government, detachments of appointees pulled from the western regions to work in administrations, law enforcement agencies, culture and education. They brought with them new national “heroes”, like Bandera and Shukhevych, other values. The Greek Catholic Church, which established its exarchates in the Crimea, Donetsk, Odessa, and Kharkov, did not lag behind the settlers. The residence of the First Hierarch of Ukrainian Greek Catholics moved from Lviv to Kiev.

The discontent and resistance that the local population showed was harshly suppressed by the widely acclaimed “friendship trains” formed from thugs from the western regions of Ukraine. Among the sponsors of such trips, the UGCC was by all means, and in the composition were Greek Catholic priests. They did not drive the believers, but guide their actions. As a result - only during the military conflict in Ukraine 72 of the Orthodox church suffered, of which 10 were completely destroyed, Orthodox priests died. So, the victory declared by Yatsenyuk was not so much over the “gang of Yanukovych” as it was over the compatriots raised by Orthodox culture and faith.

To whom and the Pope is not a decree


Understanding of this, probably, is not yet fully conscious. Today, at the time of social and economic upheavals, people are more concerned about the dead and wounded in civil conflict, prices, tariffs, wages, benefits, exchange rates. Violence over spirit, culture, and faith is rarely spoken of.

But this topic was directly touched by Pope Francis and Moscow Patriarch Kirill during his historic meeting in Havana. They talked, including, about Ukraine. The pastors of the two great churches called on all parties to the conflict to prudence, public solidarity and active peacemaking.

The Lviv portal of the Greek Catholics "Catholic Ogladach" in Lviv, inadmissibly impudently reacted to the meeting in Havana. He called it "marginal and airport" - "a distraction from the real problems of society, another act of Russian foreign policy, and not an interchurch event."

The reckless courage of the Uniate propagandists is supported by the position of the head of the Ukrainian Greek Catholic Church, Archbishop Svyatoslav Shevchuk. “Our many years of experience suggest,” Archbishop Shevchuk warned readers of Ogladach on the eve of the event, “that when the Vatican and Moscow organize meetings or sign some common texts, we should not expect anything good from this.”

Later, when the joint Declaration showed, among other things, the hope of Pope Francis and Patriarch Cyril that a split among the Orthodox of Ukraine would be overcome on the basis of canonical norms, and it was recognized: uniatism is not a way to restore the unity of the church, Svyatoslav Shevchuk did not hold back at all.

Already on the website of the UGCC, the First Hierarch of Greek Catholics wrote: “Certainly, this text (the Declaration - G.G.) caused deep disappointment among many believers of our church and simply not indifferent citizens of Ukraine. Today, many have turned to me about this and said that they feel betrayed by the Vatican, disappointed with the half-heartedness of the truth in this document and even with indirect support from the apostolic capital of Russia's aggression against Ukraine. Of course, I understand these feelings. ”

Supported by Archbishop Shevchuk, foreign Catholic publications were peppered. Their geography is from Winnipeg to London, which, incidentally, coincides with the compact settlement of Ukrainian Greek Catholics united in seventeen foreign dioceses. It makes no sense to quote their righteous anger and general indignation. The piercing lines of the notes do not hide the main point: they are determined to celebrate victory over peace and Orthodoxy, and they are called to peacemaking and prudence. It seems to the Greek Catholics that even the Pope is not a decree.

... Odessa elder Jonah reposed in December 2012 of the year. A year after his death, the second Maidan happened, and the civil war began in Ukraine. Eyewitnesses recall that when a wise monk spoke about the separation of Ukraine from Holy Russia and the destruction of Orthodoxy, he peered into the distance and often added: "But the Lord will not allow this." For some reason, even a non-believer would like this prediction of a great old man to come true ...

Ctrl Enter
Noticed oshЫbku Highlight text and press. Ctrl + Enter
We are
How Maidan ravaged Ukraine. Two years ago, a coup d'état took place in KievResults of the week. “Bonjour to you in your hut”
60 comments
Information
Dear reader, to leave comments on the publication, you must to register.