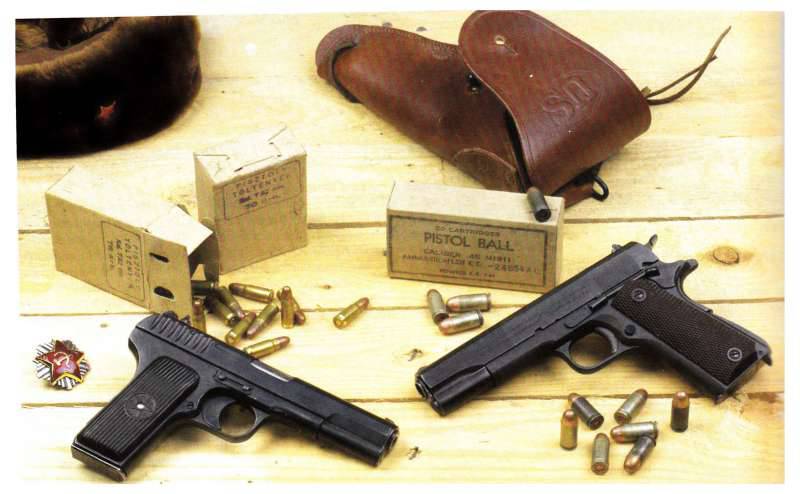 The photo above immediately invites you to check both models for similarities and differences. Estet looks at their beauty (if this concept is generally applicable to arms). Person interested in history, wonders which of the pistols is older and which one served as an example for the newer. From our “Western” point of view, the Colt is “more beautiful” and looks more modern than Tokarev. This subjective feeling has some grounds. First, the Colt in the photo looks almost the same as its modern, “spick and span” descendant. TT, on the other hand, has not been produced for many decades, and until the fall of the iron curtain was practically unknown here. Its design can hardly be called elegant - a sort of “Trabant” (a car produced in the GDR), which was not bought for beauty.

If you forget about the subjective sensations, the picture looks a little different.
The Colt story begins in 1905, when Browning adapted his “Automatic Colt Pictol” in .38ACP to the more powerful .45ACP. After rigorous tests and numerous alterations, the Model 1911 was officially put into service and went into mass production. This story has long been known and does not need to be repeated.

In the USSR, it was only at the end of the 20-s that the turn came to replace the revolver with a modern self-loading pistol. Fedor Vasilyevich Tokarev, a talented gunsmith, who was 16 years younger than Browning, developed a pistol for "his" cartridge 7,62x25 by order of the military leadership. He developed a cartridge shortly before this, in order to provide his first submachine gun (originally created for the Nagan revolver's cartridge 7,62x38) with higher firepower and reliability.

The main difference between these two pistols lies not in the plane of the structure, but in the ammunition. Americans, based on the unsuccessful experience of fighting in the Philippines, where the .38 Long Colt cartridges showed their low effectiveness in battles with the rebels, preferred the more powerful .45 caliber. The Soviets looked more in terms of supplies - they wanted to have a pistol using the same cartridge as the submachine gun. 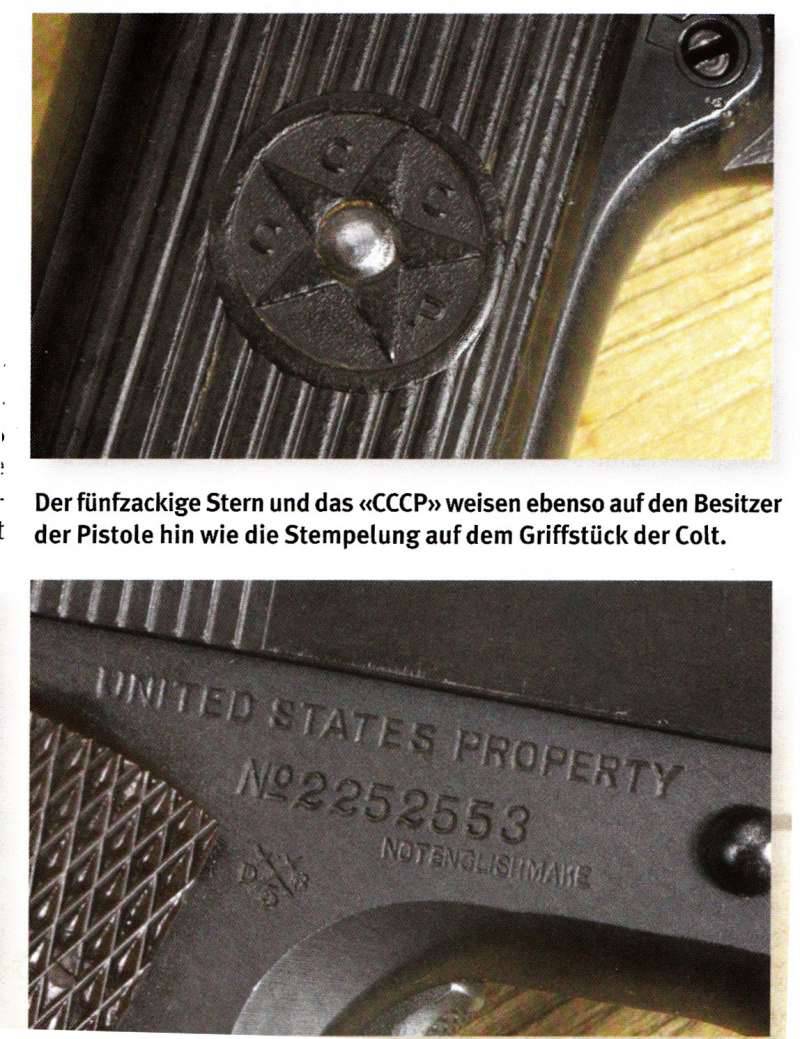 The five-pointed star and the inscription of the USSR, as well as the marking of the Colt, indicate the nationality. 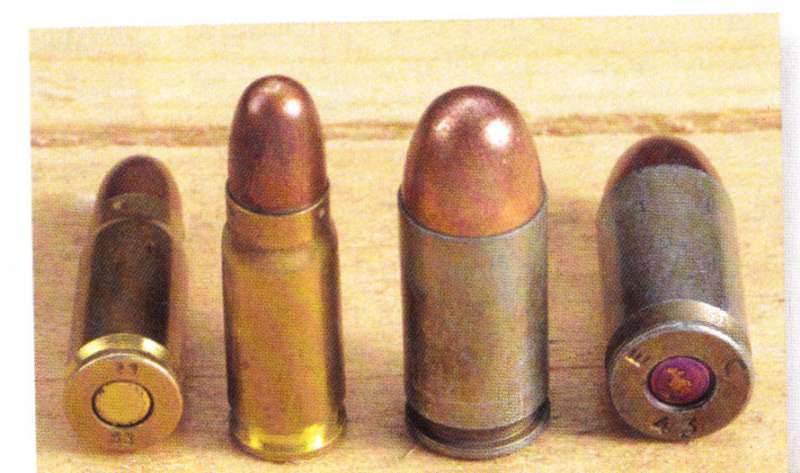 To be completely honest, this cartridge is not entirely a creation of Tokarev, but is based on the 7,63 Mauser, created a quarter of a century before for the С96 pistol, and, in turn, based on 7,65 Borchard 1883 of the year. Nothing is new under the Sun, and there is no need to reinvent the wheel every time to move forward.

The Tokarev cartridge is almost identical in size to the Mauser cartridge, but somewhat inferior to it (according to the reference literature) in gas pressure. The difference in 200 Bar (2600 Bar at Mauser versus 2400 Bar at Tokarev) today hardly anyone would notice, but nevertheless it is not recommended to charge Mauser cartridges in “weak” TTs. Nevertheless, a slightly different diameter of the bullet and another type of powder provides the Tokarev cartridge a high initial velocity and muzzle energy, but more on that later. 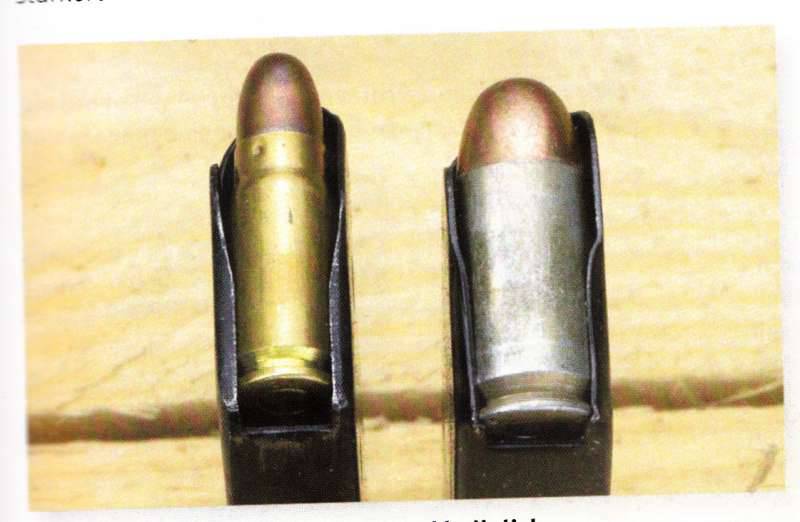 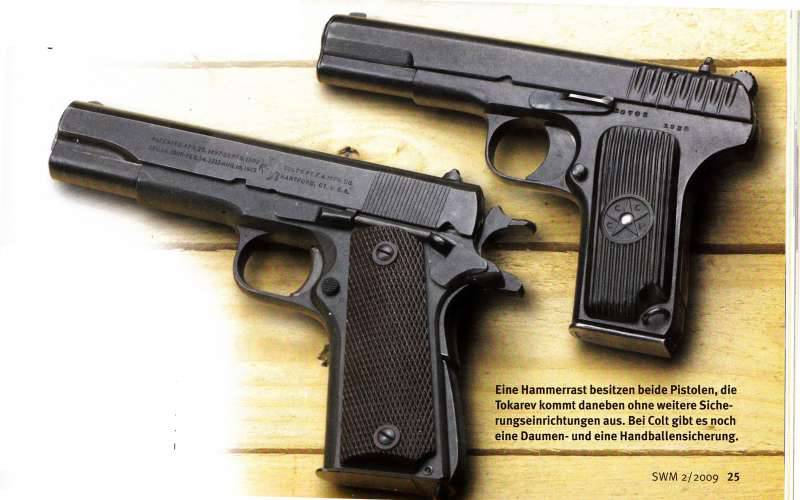 The guns of both pistols have the function of a safety half joint, the TT does not have other safety devices. The colt has automatic and non-automatic fuses.

The main similarity of the Colt and the TT is in the method of locking the barrel through the "earrings" and grooves in the breech breech. To ensure the fixation of the barrel muzzle in the locked position and at the same time its free deflection when the bolt departs, Browning used a guide bushing. Also entered and Tokarev, but made it much more massive. This adversely affected the accuracy of shooting, but increased reliability. 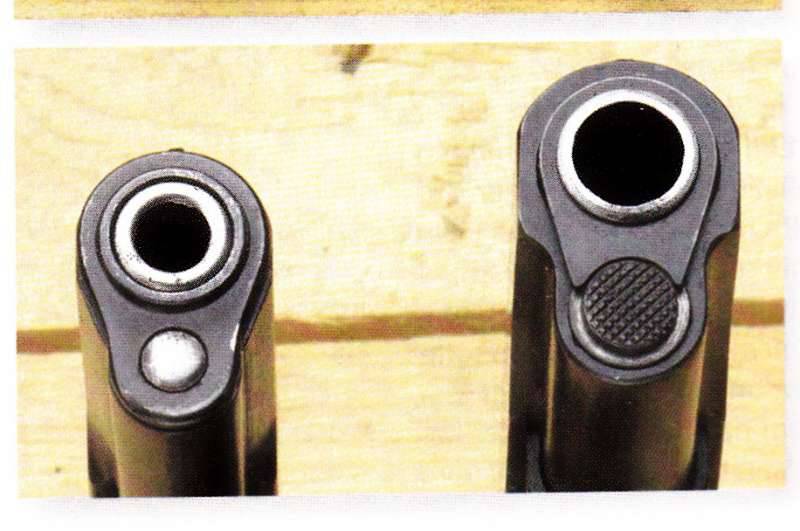 On the left - the "small-caliber" TT, on the right - the impressive Colt muzzle. Both pistols have guide sleeves.

But the fuses Tokarev stingy. Rather, they have no TT at all, except for such a protrusion on the trigger for a safety semi-armature, while the Colt has a non-automatic safety device in the rear part of the frame and an automatic safety device on the rear part of the handle. Therefore, wearing a cocked TT is categorically not recommended, as well as with a cartridge in the chamber and a flattened trigger, because if the trigger is not on the safety half arbor, then it is in contact with the drummer. 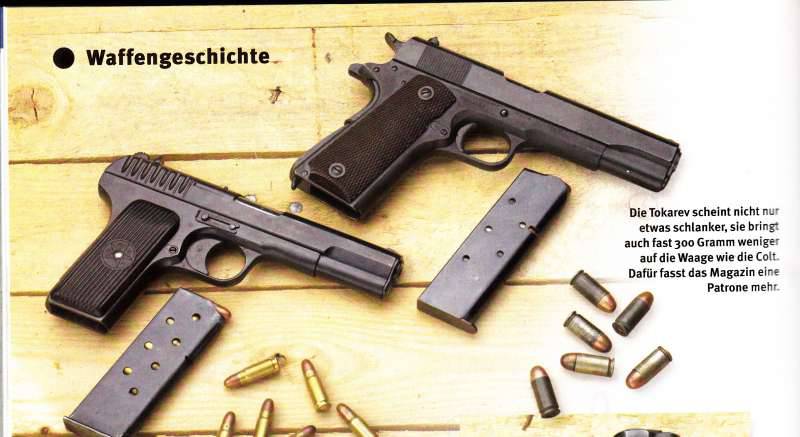 The TT is more compact and weighs less on 300 grams, besides its store capacity is more than one cartridge.

The trigger mechanism of the TT is removed in assembled form (as in the XIG 210) - very convenient for cleaning and repair.

The combat qualities of pistols and submachine guns of the same caliber (PCA and Thomson 1928) will be considered in the next issue. 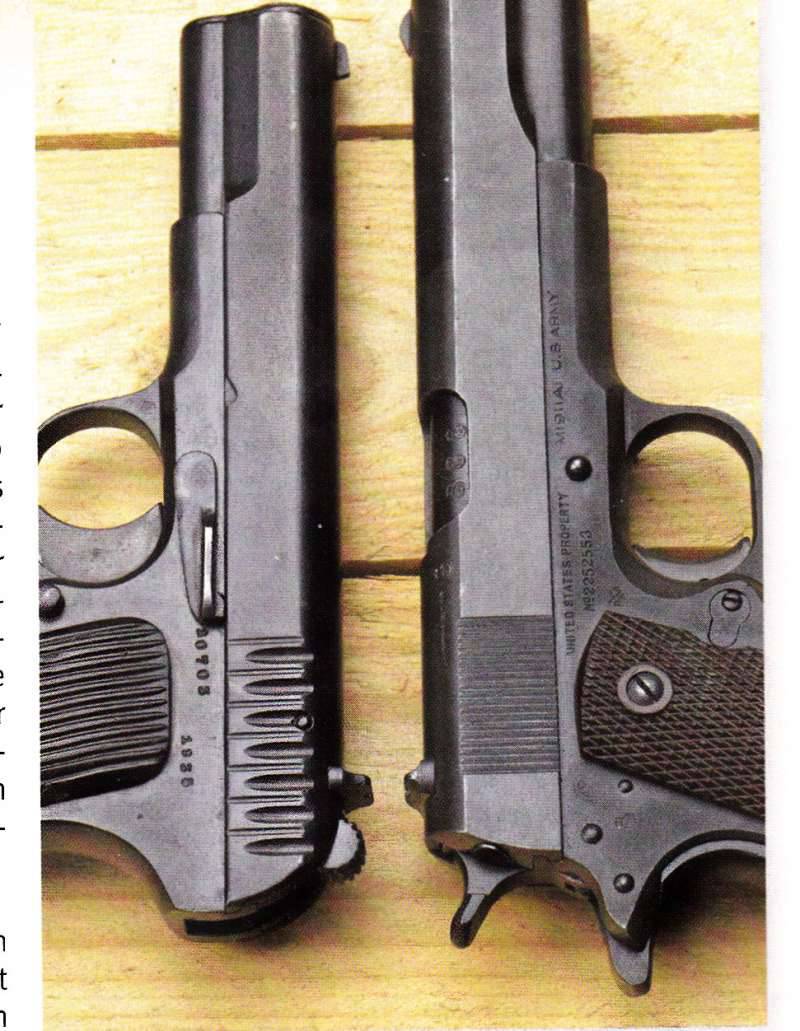 The length of the pistols is almost the same. 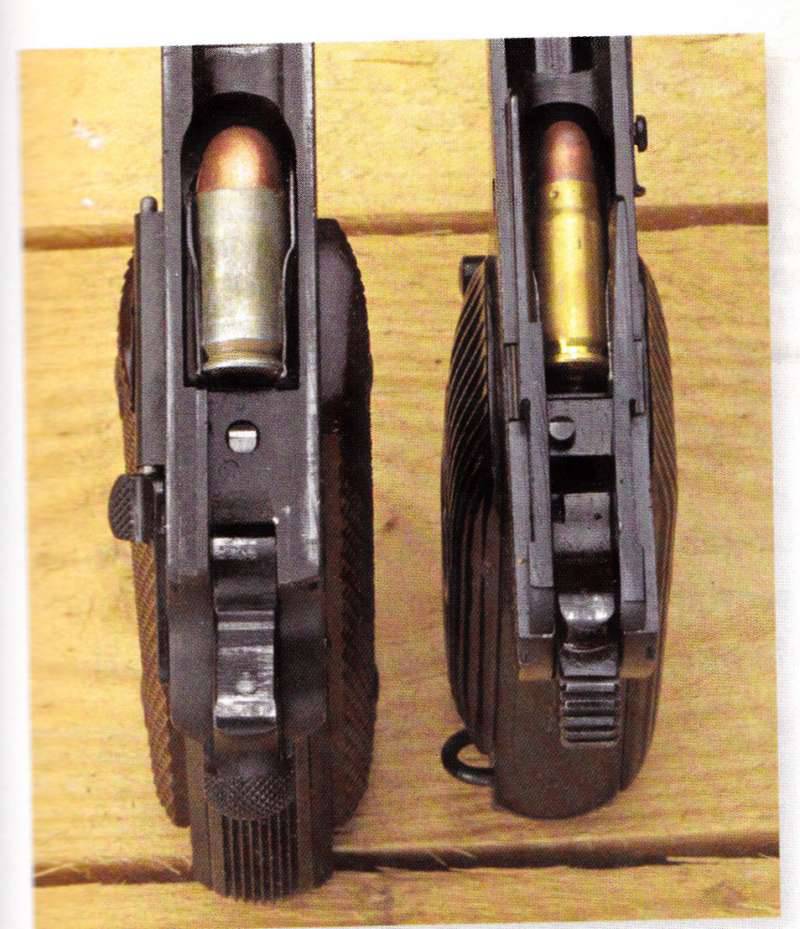 The width of the pistols corresponds to their calibers. 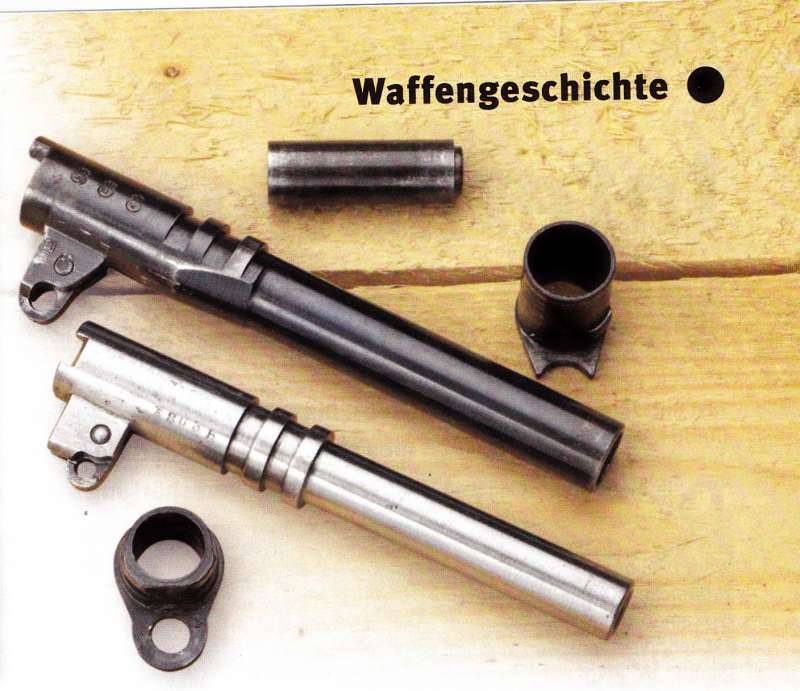 Above - blued barrel, guide bush and Colt spring bush. Below - they are TT. 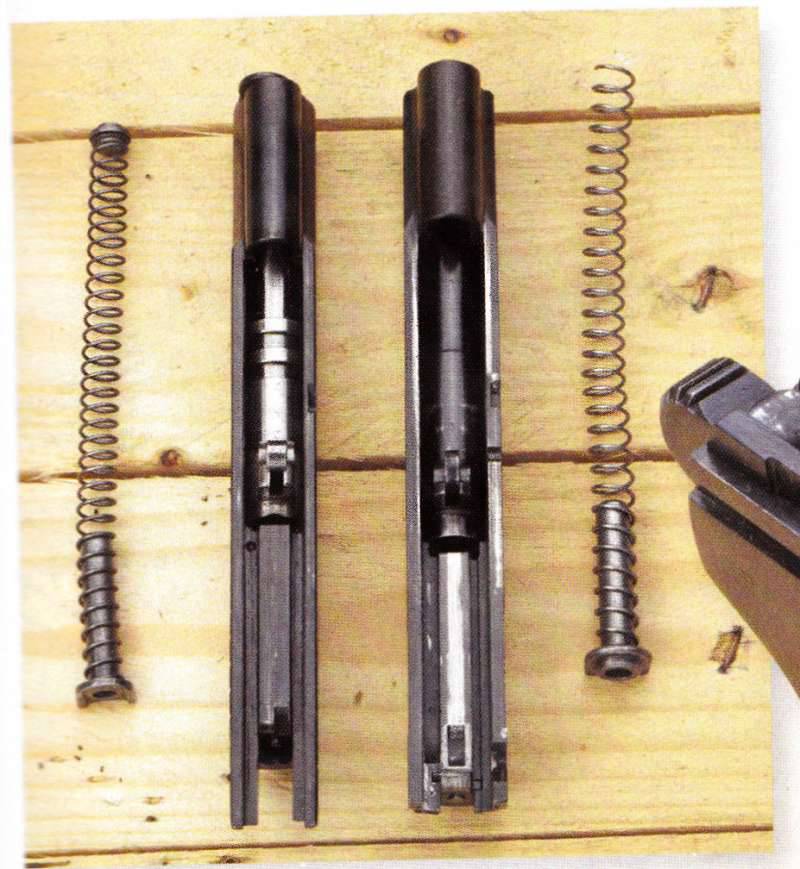 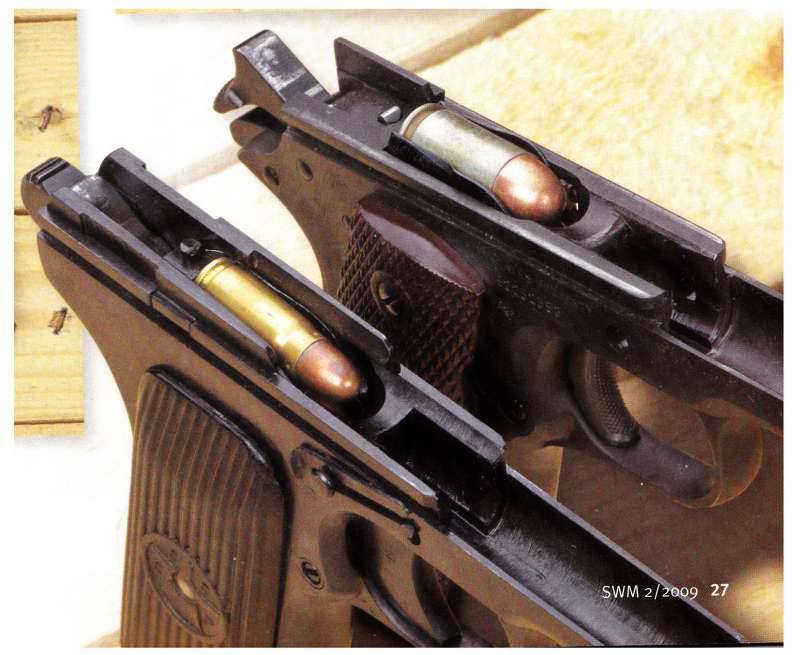 The protrusions of the TT frame (on the left) additionally support the shop's miniature sponges.

PS Translator's Note (Slug_BDMP)
With the Colts of the .45ACP caliber I practically had no business - I shot 1-2 times. It was remembered that the return is stronger than from 9x19, but not by much. But I have a small-sized copy of the Colt-GSG-1911. Appearance and controls correspond to the original. What can I say. In the hand sits well, the fuse is quite comfortable. In general, there are no complaints.

There is a TT in our club, though not the original, but a Chinese copy of the 9x19 caliber. Shoots - very accurate. The handle looks disproportionately small, but in the hand, however, the gun sits well. Chinese fuse is very uncomfortable. Like the fact that USM during disassembly is removed entirely. The disadvantage is the impossibility of using blunt-bullet cartridges, for example, expansive bullets. The barrel has no guide chute, and the bullet rests against the edge of the chamber. It is said that the Colts have the same problem.
Well, that's all personal impressions.

Ctrl Enter
Noticed oshЫbku Highlight text and press. Ctrl + Enter
We are
Steel and tinSteel Donbass. A story about how a deadly weapon was transformed into beauty
167 comments
Information
Dear reader, to leave comments on the publication, you must to register.