February 20 2016
67
Apparently, the real political crisis is gaining momentum in Ukraine. The complete collapse of the parliamentary coalition was another act of insane tragicomedy, which began in February of the year before last. It is indicative that the authorities began to stigmatize even those who are fully embedded in the system not in the most recent roles. For example, Mikhail Saakashvili. Or the radicals, who, although they were pushed aside from the levers of control, almost immediately after the “revolution of dignity”, but still kept some posts. It is also interesting to observe the appearance on the political scene of Yulia Tymoshenko in a renewed vivid image, more suitable for an adult film star. All in all, this means one thing - the throne with a trident staggered and an open struggle for power began. 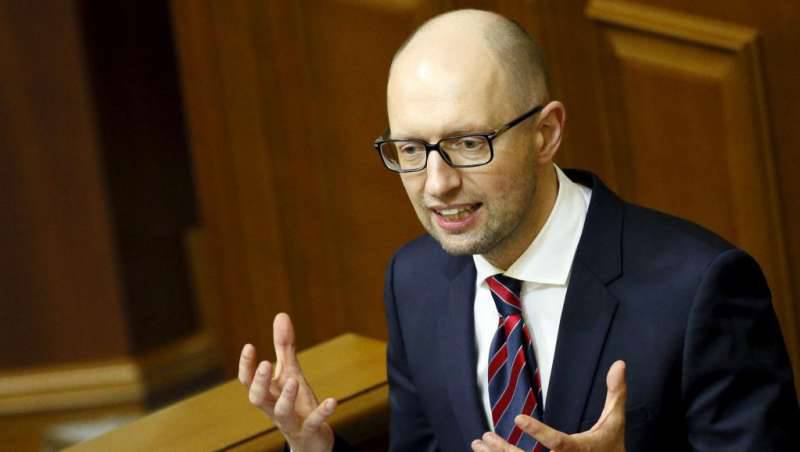 All the signs that precede the crisis of governance are evident: the collapse of the economy, an unsuccessful war, the loss of public guidelines. The unsinkable Yatsenyuk, which in Ukrainians causes no longer even irritation, but fierce hatred, remained in power and openly mocked political opponents and the population. True, he laugh, apparently, did not last long.

The fact of a serious deterioration of the situation is evident and the presence in the power of a subject who has soiled itself, Yatsenyuk, is increasingly destroying the authority of the entire ruling regime. At some point, even the all-powerful curators from the US embassy will not be able to keep the balance. Americans can not afford too frequent change of government, because each new replacement of power will be less legitimate than the previous one. Washington, by the way, is of little concern to Ukraine now: in America, the height of the election campaign and the foreign policy part is fully occupied by Europe and the Middle East. Of course, nobody forgot about the Square completely, but there is no former attention either.

So the American-European curators of Ukraine are faced with a difficult choice. On the one hand, there is a clear need to change the top officials in power in order to let off steam of indignation. On the other hand, any replacement now introduces its own uncertainty factor; moreover, in the United States and the European Union they are clearly satisfied with the activity (no one did more to deindustrialize the former second in capacity of the Union republic than its current nominal rulers) of the existing team, and replace it properly a working tool is not planned. And as for the discontent of the natives - who cares about it? True, the curators of the Ukrainian direction do not understand or don’t want to understand a rather important point: if the government is not replaced now, then it’s already a few months turn when everything collapses “to zero” by replacing the prime minister alone.

The fact is that the uprising will now be much more fierce than any event of Euromaidan 2013-2014. Maidan, if you do not take the fact that he served as an extras to cover the coup, was a rebellion of the well-fed, who wanted to live even more rich. But now comes the "revolution of empty stomachs." There are other notable differences. Euromaidan took place in an atmosphere of relative calm: at the very least, state institutions functioned and the population did not have such a number of firearms. weapons. Now any revolution or revolution will occur against the background of universal bitterness and chaos.

Another reason that keeps the situation within the framework for the time being is the unwillingness of all players to violate the principle of the power's sacredness, even if it is only visible. The power that any gang can seize is no longer power. Any coup could lead the conspirators to suddenly find that they do not control anything other than government buildings. However, as the situation in the country deteriorates, this brake will also cease to play any significant role. In addition, the fragmentation of Ukraine, and so it goes at a fairly vigorous pace, its specific principalities have actually appeared in Odessa, Transcarpathia, parts of the Kherson region and other places. The “decentralization” declared by the Kiev leadership, in essence, is only a reaction to objective processes and an attempt to place them at least within some legal framework.

In the event that the power in Ukraine does change, the new leadership will first of all have to solve two key tasks: preserving the country's unity and restoring the economy. Moreover, it is with the economy that the problems will be greatest, since in the old days two thirds of the export of Ukrainian goods accounted for precisely Russia, which, as we know, was declared the aggressor. In order to start restoring trade ties, the two countries need a full-fledged peace treaty, the conclusion of which no political party in Ukraine will accept.

The only organized force that today is able to take power through an armed coup, these are undisguised Nazis, who enjoy more and more support in society. The current leadership in Ukraine is not Nazi in its essence, since the country is ruled by oligarchs who have adopted the methods and slogans of the Nazis, which the Nazis are very dissatisfied with. Even today, in order to take control in their own hands, they will need only two or three hundred determined people with weapons. Exaggeration? Not at all. The fact is that the Ukrainian security forces trust the current rulers even less than at one time - Yanukovych, moreover, they are disorganized and demoralized by numerous lustrations and simply arbitrariness by the radicals. Therefore, at the crucial moment for the country, they can simply step aside. Risk life and health for the leaders who have robbed the country hardly anyone will.

As for the events on the fronts of Donbass, there a possible change of power may lead to the same consequences as the February revolution in the Russian Empire led to the Imperial Army. If desertion in the Armed Forces of Ukraine is not a rare occurrence now, then in the event of the collapse of the central government, even if temporary, as at the beginning of 2014, the military control center will crumble. What will happen in this case with the army is extremely difficult to predict. However, for the militia of the people's republics, even a complete crumbling of the front from the Ukrainian side hardly changes anything. After the well-known events of August 2014, it lost its subjectivity and was forced to submit to the “peace plans” of the next “Minsk Agreement”.

One way or another, in language historical comparisons, its own February revolution in Ukraine, most likely, is coming to a natural ending and the capitalist ministers oriented towards the West turned out to be complete bankruptcies. The Ukrainian October is coming. It is not yet clear who will stand on the armored car.

Ctrl Enter
Noticed oshЫbku Highlight text and press. Ctrl + Enter
We are
Armored vehicles of Yugoslavia. Part of 4. Disintegration of the country (1980-1991)Saakashvili leaked, or Bog for Bidziny
67 comments
Information
Dear reader, to leave comments on the publication, you must to register.