The story of a "nameless"

February 24 2016
8
... It is strange how things can sometimes tell a lot. AT stories thimble, which will be discussed, there is a "chapter", "written" during the Great Patriotic War. ..


... As soon as the last field work was finished in the autumn, they barely filled the cellars with fermented cabbage - therefore, the time of dumplings was approaching. As the first severe frosts struck and all the huts of the Ural village Pavlovka were covered with snow, Venia and grandmother sat at a large table.

They needed to make a lot of dumplings so that all the villagers would have enough, and in Pavlovka there were fifty-two yards. Yes, even from the neighboring villages came with a bow and a request - there are still many dozens of courtyards. The boy and grandmother sculpted a whole mountain, sometimes for several days - and in large wooden troughs they were taken out into the street and put in special boxes. People took, thanked, brought in return various products, clothes. And for the house dumplings and kept on the street. The Ural frost protected them better than modern freezers.

Venka in dumplings business was the first grandmother's assistant. And the woman Varya for him is the most important person. Father - a woodcutter - crushed to death by a fallen tree, and mother also died, having caught a bad cold. The family had two more children - Nadia and Lyuba, but they are very small. So Venka - the only man in the house and the patron.

But sometimes the childhood, forgotten for deeds and difficulties, still stretched out to the boy his warm palms. And once, at such a moment of childish mischief, standing in front of a wooden table, Venka sneaked an old grandmother's thimble and put it in the dough instead of filling. He sealed the "secret" and, along with other dumplings, took it out to the yard. And there was a winter 1915 of the year ...

On the last days of April, 1945, the nights were cool. Though the warriors were warmed by the closeness of our Victory, they were inflamed with hatred of the fascists, but they were still cold. And there was a rescue shag. You smoke - and the heat spills over the veins.

- Ignatov Stepan! Do you smoke Tabachu something shake off!

Before the 1 tank mechanic of the Krasnograd Corps, Stepan Ignatov, a senior sergeant by the name of Rakit appeared out of the ground.
Ignatov got a pouch:

- Let's get some sleep. Substitute your pouch.

And he generously poured the sergeant all the remaining tobacco in his pouch. And along with it fell some small object.

Ignatov gently blew the shag - a dull yellow thimble appeared in the palm of his hand.

- Memo from home. I lived in my childhood in the Urals, though very briefly. Some kind of grandmother from a neighboring village made scampi dumplings for almost all families. I once came across a surprise: instead of a filling - a thimble. The tooth broke, still chipped, see? All war with a drove. This thimble, read it, participated in all the battles of the Kalinin Front, even if it was a medal! And everywhere I warmed my soul. Many carry pictures of their relatives with me, but I see, quite another. I don’t have anything more to do with my childhood: shortly after the move, my parents died, he was homeless, then in an orphanage. Only lived carelessly those one and a half years in the Urals ...

Sergeant Benjamin Rakita was dumbfounded. For thirty long years he kept in memory that distant childhood episode. I wondered who the villagers got the coveted dumpling. Grandma then, of course, missed a thimble, but he never admitted. She decided that she had lost, and soon she forgot about the thimble - she became very bad with her eyesight before sewing.

Rich land near Irkutsk, in the early sixties, there was enough work for geologists. Working on the drill, people had to protect themselves from various intestinal diseases. And therefore strictly according to the schedule drank salt water - it was a kind of disinfectant.

Geologists appreciated salt. The doctor, the wife of one of the geologists, Svetlana Veniaminovna Smirnova, distributed it among them.

Once the driller Fedor Tagintsev felt bad. Apparently, the heart could not withstand stress. But Tagintsev did not want to give up work. Came to Svetlana Veniaminne for help.

She looked at him, made an injection, ordered him to sit quietly for half an hour, while she herself went about her business.

- Sveta, do you have a spoon? - suddenly asked Fedor. - What are you salt thimble something? He is a little, his ring finger barely fit.

- I have a spoon - the doctor smiled. - Yes, only this thimbler is more precious to me. My father died in the war. And when he died - the second of May 1945, in the very heart of Germany! And his friend then later brought my father's things to us with my mother, documents. And this thimble. He is really on the ring finger, and is called - "nameless". This thimble of my great-grandmother. She loved to embroider and always wore it. Copper it, easy and convenient. And the father, when he was small, invented such a prank ...

And Svetlana Veniaminovna told what you already know.

After returning home from Irkutsk, to the village of Pyatnitskoye, Izmalkovsky District (her husband was from here), Svetlana Veniaminovna sheltered a girl, Valya, an orphan.

The adopted daughter had a good ear for music. She talked indistinctly, strongly stuttered. But she could whistle any tune! Once I saw Valya on the table, a thimble forgotten by my mother. She brought it to her lips - and suddenly the “nameless” sang a sad melody: “How could I, mountain ash, get over to the oak ...”.

Since then, fellow villagers have nicknamed Valya “friend of the thimble”. The girl did not part with him for a minute, she carried with her in her pocket.

And soon Svetlana Veniaminovna had a daughter, Katya. While mom was at work, Valya was looking after her little sister. And, of course, whistling songs baby. So they fell in love with Katyusha, that she herself learned to whistle with the help of a thimble even before speaking. But once she took the nameless in her mouth, took a deep breath - and nearly lost her life.

I saw trouble Valya. I ran over to my sister, hit her several times on the back - it did not help. Valya grabbed Kate by the legs, lifted, began to shake. The thimble fell out, and the girl breathed again.

... Valentina died of pneumonia, not having lived two days before her twentieth birthday. And the thimble now keeps Katya, Ekaterina Pavlovna Smirnova. Now she is an adult woman. As in childhood, she lives in the village of Pyatnitskoe and loves to sew. Only this thimble does not use - saves.

Ekaterina Pavlovna often comes to one of Lipetsk orphanages. He brings surprises to the children, which she makes herself. Especially the woman fell in love with a little girl, five-year-old Ira. Catherine Pavlovna wants to adopt her. In the meantime, slowly teaches girl embroidery.

In the photo Benjamin Rakita is on the right. 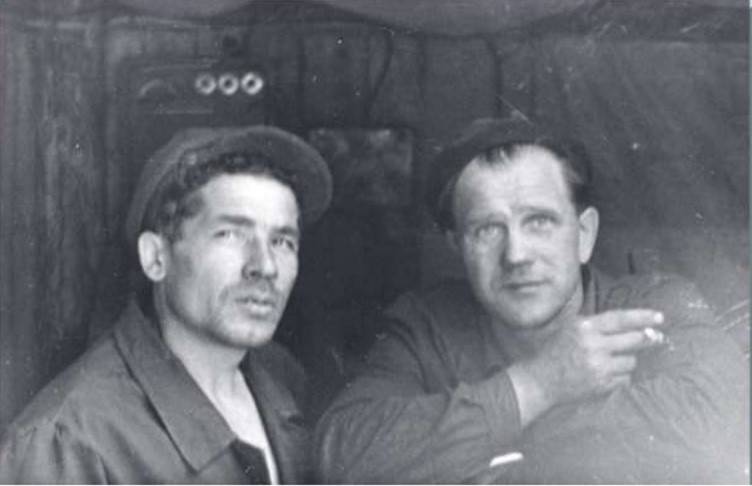 Ctrl Enter
Noticed oshЫbku Highlight text and press. Ctrl + Enter
We are
Duel of Russian dog and German dogFather told
8 comments
Information
Dear reader, to leave comments on the publication, you must to register.