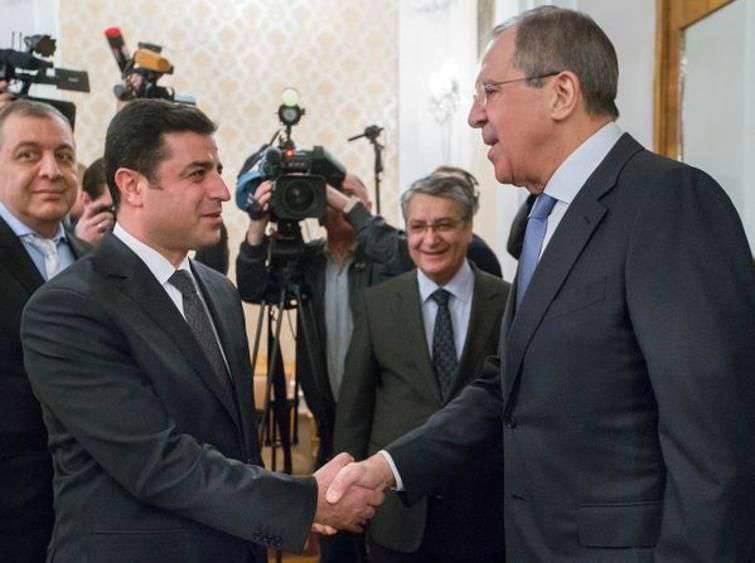 November 24 Turkish air forces shot down a Russian Su-24 in the sky over Syria, which participated in the counter-terrorist operation. Russian President Vladimir Putin called the incident a stab in the back by the accomplices of the terrorists, openly declaring cooperation between Ankara and the Islamic State. In addition, on November 28, a number of sanctions were applied against Turkey, primarily related to trade and economic relations.

Presidential decree provides for a ban on Turkish goods;

the activities of many Turkish organizations in Russia will be suspended;

a ban on the employment of Turkish citizens;

since January 1, visa-free travel between countries has been abolished.

In addition, Vladimir Putin instructed the government to take measures to ban charter flights between Russia and Turkey.

Of course, sanctions have only political overtones. And another Kurdish factor can be another political tool of influence. It must be said that the attention of the Russian public to the Kurdish issue is due to several reasons.

First, the Syrian war. The 4 war of the year in Syria, in addition to the Syrian opposition, from the very beginning of the civil war, another element of the government forces was allocated, namely, the Kurdish troops. Having a bitter experience of the liberation struggle, when the Kurds, embraced by the desire to achieve statehood, became literally pawns in the hands of the powers, since the beginning of the war in Syria, the Kurds have been neutral and have not joined any of the parties. Then came the Islamic state, another term in the equation of the war in Syria. And at this moment the position of the Kurds began to slowly but surely change. Kurds with Russia - it became clear about this literally in November of this year. Syrian Kurds support Russia's actions against the militants of the “Islamic State” (IG) and hope for military cooperation with Moscow. This was stated by the leader of the most influential party of the Syrian Kurdistan "Democratic Union" Salih Muslim. “We are on the side of all who fight terrorism in Syria. As for Russia, its actions enjoy our support, even though they were late, ”said Salih Muslim. He hopes that Russian intervention will contribute to a political resolution of the conflict in Syria.

The second reason, rallied Russia with the Kurds, oddly enough, downed Su-24. Previously, it seemed that Russia deliberately adhered to a moderately indifferent position towards the Kurds, given the capacious trade and economic relations with Turkey. Thus, on the scales of multidirectional stances towards the Kurdish issue, the pragmatism always outweighed, namely, the value of the Turkish partner. Now, when the Kurds have something to say to the world, there is something to help Russia and, most importantly, when the contradictory policy of T. Erdogan is in crisis - Russia, turning away from Turkey, has turned to the Kurds.

The third, but not the least important reason for Russia's emphasis on the political environment is undermined agreements. Turkey, in the fall of 1994, agreed with Russia not to interfere in the affairs of the North Caucasus, in exchange for Russia's non-intervention in the Kurdish problem. It must be said that Russia has kept its commitments, but Turkey has not kept them. There are suggestions that Turkey sends its militants to the territory of the North Caucasus. On the annual Message, the President made it clear to the Turkish side:

“We remember that it was in Turkey that the militants who were operating in the North Caucasus in the 90-s and in the 2000-s hid and received moral, material support. And now we still notice them there. ”

The rapprochement of the Kurds and Russia led to a very significant meeting. Russian Foreign Minister Sergei Lavrov met on December 23 with a representative of the Turkish Kurds, with the leader of the pro-Kurdish Democratic Peoples Party, whose name is Selahattin Demirtas. Let us examine this person in more detail. Kurdish representative 42 of the year. After graduating from the law faculty of the University of Ankara, Selahattin Demirtas worked as a lawyer for a while. He was the head of the Diyarbakır branch of the Society for Human Rights, and held senior positions in the Foundation for Human Rights in Turkey. 13 November speaking at Liberty Square in front of 5 to a thousandth audience in the city of Mardin Demirtas condemned the construction of the statue to Kenan Evren, leader of the coup 1980 of the year, criticizing the ban on hanging Ocalan’s posters: “They say:“ You cannot hang A. Ocalan’s poster . If you can build a statue of Evren, the Kurdish killer, why can't the Kurdish people hang a poster of their leader? If the Kurds are not able to hang a poster of A. Ocalan in Kurdistan, then where can they hang it? We will go further and erect his statue. Remember this. ”The Patriotic Rod also has its brother, in Turkey it is well known that Mr. Demirtash’s brother, Nurettin Demirtas, took part in hostilities in the territory of Syrian Kurdistan. The parliamentary elections held in Turkey in the summer brought wide fame to Mr. C. Demirtas: instead of the portrait of Recep T. Erdogan, the political newspapers were decorated with a photo of Demirtas. And all because DPN went to the Turkish parliament with an unexpectedly high rate for it - more than 13%, taking away the votes from the Justice and Development Party of Erdogan. 79 Kurdish votes forever robbed T. Erdogan of his imperial dreams, in connection with which the president had to call early elections, following which he managed to restore his party’s position in the Mejlis. The Democratic Party of Nations has retained seats in parliament and this time received 11% of votes.

Thus, the Democratic Party of Nations defends the interests of the Kurds and other ethnic minorities living in Turkey, and also advocates democratic reforms in the country.

The Turkish side rated this meeting rather negatively. “Shame and treason” - this is how the Turkish Prime Minister called the visit of the Kurdish leader to Moscow. “Why are they going to Russia at such a time?” They consider it their moral duty to cooperate with those who have problems with Turkey, instead of acting for the good of their people, ”asked Prime Minister Ahmet Davutoglu. During the meeting, the incident with SU-24 was also discussed, the Kurdish leader criticized Turkey’s actions, calling them objective and groundless, and the Syrian crisis was also discussed (the Kurdish leader adheres to the pro-Russian position about the need to conduct an anti-terrorist operation without double standards). The issue of the right to freedom of speech and the use of the native language was also discussed. The fact is that all citizens who speak Turkish are considered by the authorities of the country as Turks and the Turkish state believes that those are 95%.

The media claim that the initiative to meet Sergey Lavrov and Selakhatin Demirtas came from the Kurdish side, however, in my opinion, this desire is exclusively Russian. And the good reason for this is that the Kurds will help Russia punish Ankara. There are several reasons why Russia should close with the Kurds:

Kurds - the most important ground force in the war in Syria;

Kurds - a potential ally in the Middle East in political processes;

The Kurds are a potential strategic partner for the energy sector in Kurdistan (which has the second largest oil fields in the world).

Ctrl Enter
Noticed oshЫbku Highlight text and press. Ctrl + Enter
We are
The Bergman trail to the North CaucasusNikolay Silaev, Andrei Sushentsov: Georgia after the elections and prospects for Russian-Georgian relations
87 comments
Information
Dear reader, to leave comments on the publication, you must to register.