Used to live in fear

February 20 2016
67
Turkish citizens are afraid. In the evening, February 17 in Ankara, thundered another powerful explosion. The attack occurred near the buildings of the command of the Air Force and Navy, the General Staff, the Ministry of Internal Affairs, the parliament building and hostels of military personnel. The terrorists blew up a car filled with explosives. According to the representative of the Turkish government Numan Kurtulmush, 28 people died as a result of the explosion. According to other data, the dead - more than 30. Prime Minister Ahmet Davutoglu canceled the planned trip to Brussels, and President Erdogan postponed his visit to Azerbaijan. Locals fear that this explosion is not the last. 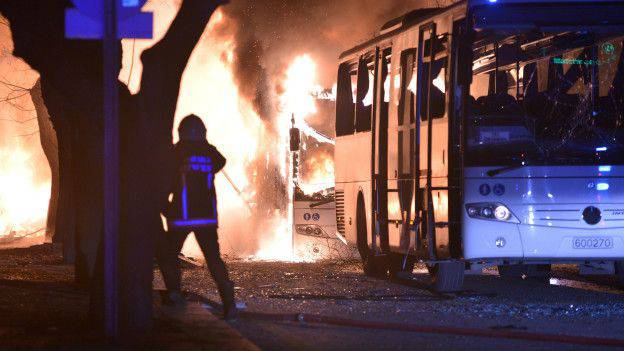 The death toll in Ankara was 28 people, said the representative of the Turkish government Numan Kurtulmush. 61 people were injured. According to the preliminary version of the authorities, the car exploded with explosives, transfers "BBC".

According to Reuters, an explosion damaged a hostel building for military personnel.

Because of the terrorist attack, President Erdogan postponed his visit to Azerbaijan.

The representative of the ruling Justice and Development Party, Omer Celik, wrote on his Twitter account that the explosion was an act of terrorism.

BBC reminds that this is far from the first terrorist act in Turkey: on October 10 of last year, suicide bombers exploded in Ankara, killing 102 people, and on January 12 2016, at least ten people died from a powerful explosion central square of Istanbul.

Late in the evening on February 17 on the TV channel "RT" There were exclusive interviews taken by journalists from residents of Ankara and eyewitnesses to the terrorist attack.

People are scared, interviewees say. All agencies have long warned of a terrorist threat.

"The explosion occurred after the end of the working day near the military center in Ankara - in the area where the buildings of the Air Force, the Navy and other government institutions are located," said Holiday Inn Ankara hotel correspondent RT Hofoner.

According to him, the residents of the capital are very frightened: “All institutions warn their employees about the need to be careful because of the terrorist threat, everyone is waiting for something to happen. We expect bad news for a long time: after the June elections, we live in constant fear, under the threat of new explosions. ”

An employee of a cafe reported that the explosion thundered around 18: 30 local time: “The explosion was strong, the windows began to tremble. Of course, people were scared. We had a full cafe, and now nobody is there. In general, our street is crowded, and now there is no one here. A lot of police and ambulances. ”

TASS cites the statement of the Minister of Health of Turkey, Mehmet Muezinoglu. According to him, "in Ankara, 14 is injured in an explosion in 61 hospitals."

“Most of the injured and dead are representatives of the armed forces,” he specified.

February 18 Online TASS There is a new information about the terrorist attack in Ankara.

More than 30 people died and over 60 injured. The country's leadership has accused Kurdish groups of crimes. In the case of the terrorist attack detained 14 people.

Ahmet Davutoglu blamed the terrorist attack on members of Kurdish groups operating in Turkey and Syria.

“We have collected intelligence in connection with the terrorist attack. At the moment, we can accurately say that members of the terrorist group “National Self-Defense Forces” (SNS, Syrian Kurds), infiltrating from Syria and associated with the separatist terrorist organization in Turkey (Kurdistan Workers' Party, PKK. - Approx. TASS), ”the Russian agency quotes him.

According to Davutoglu, “the perpetrator of the terrorist act is a native of Syria, Salih Nejar”.

“Our opposition to border violations by Syria will continue,” Davutoglu said. - Attacks on Turkey will not go unanswered. The army will continue to strike at the SNA in northern Syria. "

In turn, President Erdogan informed that on suspicion of involvement in the terrorist attack, the authorities detained 14 people. “Detentions will definitely continue. They will not stop at this figure, ”the president said.

The Kurds denounced the Turkish authorities.

Kurdish self-defense detachments did not organize an explosion in Ankara, this is the work of the IG, said RIA News" leader of the Kurdish Democratic Union, Salih Muslim Mohammed.

“This is absolutely not true. There is no connection between the Kurds and what happened in Ankara. What happened there refers to the struggle of Turkey against the “IG”, whose elements live in Turkey, ”said Salih Muslim.

Some experts believe that Ankara intended to launch a full-scale military operation in Syria, for which the guilty are appointed.

“Of course, it can be assumed that any structure affiliated with the Democratic Union organized an explosion in Ankara directed against the Turkish military,” said "Free Press" Director of the Center for the Study of the Countries of the Middle East and Central Asia, Semen Bagdasarov. - There are enough thugs everywhere, especially since in the south-east of Turkey there is a real civil war, about which the media prefer not to write. But when the security services of Turkey, and then Erdogan, are promptly accused of a terrorist act by a Syrian citizen - a soldier of the militant wing of the Democratic Union party, it frankly looks like a provocation arranged by the order of the authorities. ”

The expert does not believe that the self-defense detachments of the “Democratic Union” need to carry out a terrorist act in Turkey for anything: after all, they are fighting in Syria. Why would they have such a terrorist act - to give Erdogan a reason to send troops into the SAR? “This fact attracts attention,” the expert continued. - The Turkish leadership from all the tribunes stated that it can no longer tolerate what is happening in Syria and is ready to send troops into the buffer zone, the EU and the US are actively dissuading the Turks, and suddenly there is a terrorist attack in the center of Ankara. In his urgent appeal to the country, Erdogan announced that Turkey would begin an active fight against terrorism in Turkey itself and abroad ... ”

“In my opinion,” Bagdasarov concluded, “everything is clear: the introduction of troops into Syria, which have long been concentrated on the border, will begin the other day.”

The Turks do not need the support of the Persian monarchies, they themselves will cope, the analyst said. And they don’t have to use Aviation. Turks can use the artillery and armored vehicles that they have enough. The Kurds do not have heavy weapons.

“Therefore, there is one of two things here: either the Syrian army, together with the Russian Aerospace Forces and the Kurds, will begin to act against the Turks in the buffer zone, or the Syrian Kurds will simply collapse,” the expert believes. “The Turkish authorities clearly said: we need a buffer zone with a depth of 10 km, including the city of Azaz.” If the Kurds close the 98-kilometer corridor, then everything, the two cantons, Afrin and Cobani, will join, and the border will be completely under the control of the Kurds. Ankara will not allow this, and therefore will send troops into Syria. ”

Be that as it may, we add from ourselves, while Erdogan and his party comrade Davutoglu have a serious reason to invade Syria. Now we should expect belligerent statements about the national security of Turkey and the need to counter the threat of “Kurdish separatists”.

Well, the citizens of Turkey will still be afraid. During the reign of Erdogan, this is “normal,” as one Turk said sadly.

Observed and commented on Oleg Chuvakin
- especially for topwar.ru
Ctrl Enter
Noticed oshЫbku Highlight text and press. Ctrl + Enter
We are
Who blew up Turkey? The explosion in Istanbul and the "wave of terror" on Turkish soilTragedy in Ankara. Who blows up Turkey?
67 comments
Information
Dear reader, to leave comments on the publication, you must to register.