February 19 2016
11
During the Second World War, the US military gained invaluable experience using airborne units. Operations “Boston” and “Albany”, which became part of Operation Overlord (landing of the Allies in Normandy 6 June 1944), involved 13 thousands of paratroopers, another 4 thousands of fighters were landed behind enemy lines using gliders. Approximately the same number of paratroopers took part in Operation Market Garden, which was held in September 1944 of the year and ended in failure.


Particularly indicative in this regard was Operation Market Garden, in which the American paratroopers clashed with the German tank parts that were in the landing area. One of the conclusions that the Americans made as a result of the airborne operations of World War II: paratroopers need an artillery system that is able to provide fire support and effectively deal with enemy armored vehicles, including heavy ones. In 1944, the Allied paratroopers often found themselves in a situation where German units, equipped with armored vehicles, including the heavy Tiger and Royal Tiger tanks, opposed them on the ground. Hand grenades or M1 Bazooka grenade launchers could only be used effectively against these steel monsters at a very short distance. Therefore, these anti-tank weapons were far from suitable for all situations; moreover, their use required composure and high skill from the personnel. The paratroopers needed a full-fledged gun that could fight enemy armored vehicles at a great distance, striking it preferably from the first hit. At the same time, such an artillery system should have been suitable for transportation by a transport plane or glider, and to achieve mobility, it should be self-propelled. 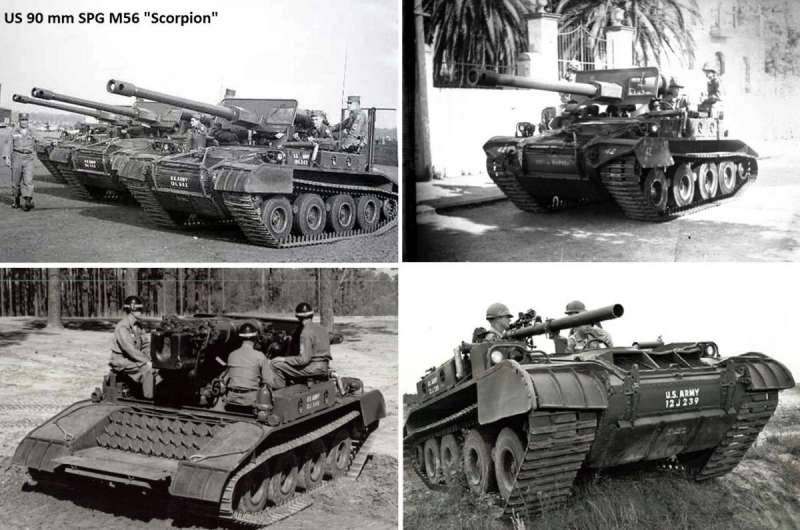 The task of developing anti-tank self-propelled guns for amphibious units was given to Cadillac, which in 1948 began to develop a combat vehicle. In 1953, two prototypes of self-propelled guns were made, which were made on the basis of the experimental conveyor Т101, then the mass production of the machine began. PT-ACS received the designation M56 SPAT (Self-Propelled Anti-Tank), but it became better known under its unofficial nickname Scorpion. Thanks to the 90-mm cannon, the Scorpion could sting a bit.

Considering the fact that in the early 1950s transport aviation possessed very modest capabilities in carrying capacity, the main priority of designers when creating anti-tank self-propelled guns was to reduce the weight of the combat vehicle in all available ways. For this reason, the self-propelled gun’s body was completely made of aluminum and had the smallest possible dimensions, the designers refused even a full-fledged fighting compartment for the crew, the self-propelled gunners actually had to ride their own car. The armor protection on the Scorpion was almost completely absent, only the shield mounted on the gun could be attributed to it, but it provided only formal shelter, since it was very small in size, and its left side, in addition to everything, was weakened by the viewing window for the mechanic the driver. This shield is more protected from insects when moving at high speed than from bullets and fragments. In the chassis of the self-propelled guns, in order to reduce the weight of the machine, rubber-metal tracks and rollers with pneumatic tires were used. The suspension of the car was torsion, while the torsion bars themselves were hollow inside. In full combat readiness with the crew, the weight of the combat vehicle did not exceed 7,7 tons, and an empty self-propelled gun weighed even less - only 6,4 tons. 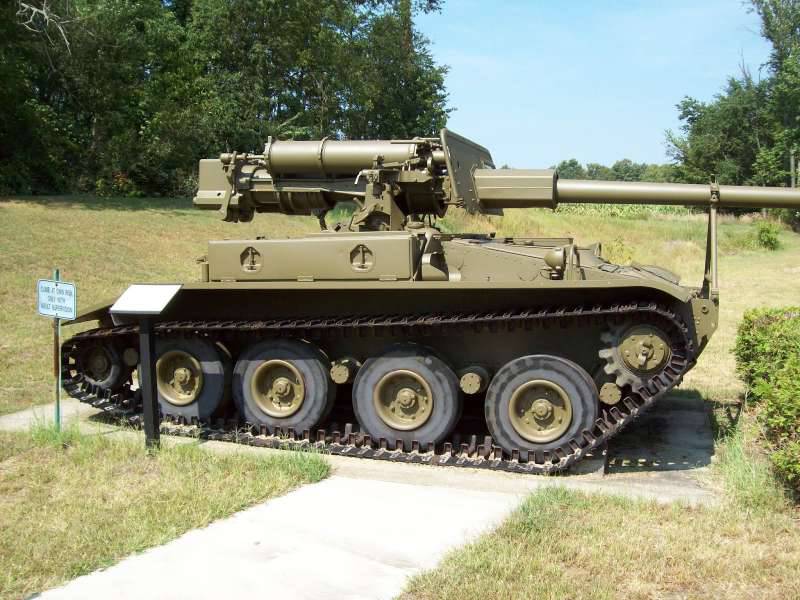 And although the self-propelled gun was originally intended for the airborne troops, it also found its use in the ground forces. In 1953, the combat vehicle entered military tests, and already in 1955, it was put into service. Serial production of the M56 anti-tank self-propelled unit continued from 1953 to 1959 year. The self-propelled gun adopted by the combat groups of the airborne units of the American Army could be transported by transport aircraft and gliders of those years, as well as parachuted. Since 1955, they have been used in the well-known 101 airborne division as a highly effective mobile anti-tank weapon. In addition to the US Army, a certain amount of PT-ACS data was supplied to Spain, Morocco and South Korea.

For the anti-tank self-propelled gun M56 Scorpion, a layout was adopted in which the engine compartment and the driver were located in the nose of the combat vehicle. In the middle part of the ACS, there was a gun covered with a small armored seat, and in the stern - its ammunition set consisting of 29 shots. The housing of the combat vehicle, which was open at the top, was made of aluminum alloys, thanks to which the vehicle had a very small mass and could be parachuted from the aircraft. The main units and assemblies of PT-SAU were sealed, and the electrical wiring was made waterproof. 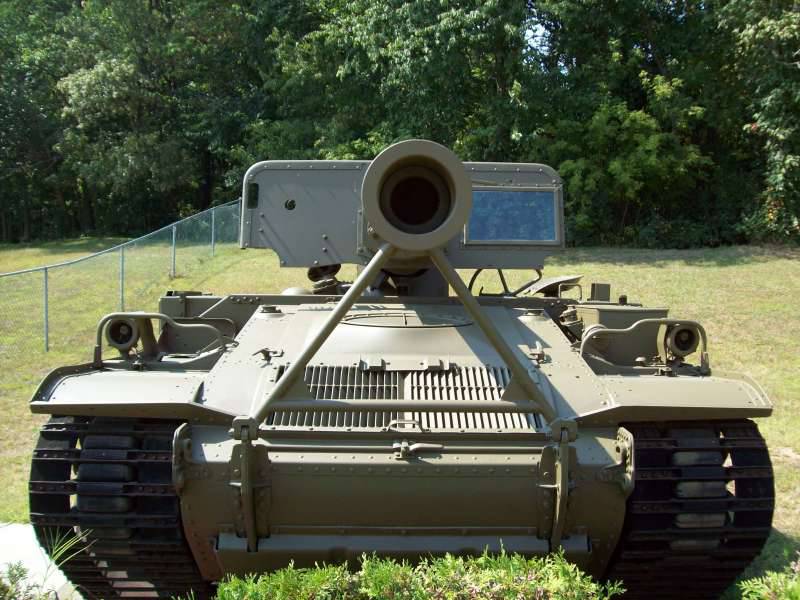 The basic one weapons The Scorpion was an 90-mm cannon with the same ballistic data as the M48 tank gun. The anti-tank gun was installed on a thumb-type machine with guidance mechanisms, which were equipped only with manual drives. The vertical pointing angles of the gun ranged from + 15 ° to -10 ° degrees, and the horizontal pointing angle was 60 °. The tool had a wedge gate, spring-hydraulic recoil devices located in the upper part of the cradle and an ejection device. The drives of the guidance mechanism are manual, the loading of the implement is also only manual. For aiming the gun at the target in direct fire, a conventional optical sight with variable magnification was used. The range of real fire from the gun was 1820 meters. For firing from closed positions could be used appropriate aiming devices. On the left side of the gun sat the driver, on the right side - the gunner.

The ammunition 90-mm guns included unitary shots with armor-piercing, sub-caliber, cumulative and high-explosive fragmentation shells. Ammunition self-propelled guns were transported directly in the car, in the stern of it and was very vulnerable to enemy fire. In addition, each shot was stored in an individual waterproof aluminum container. An additional part of the ammunition self-propelled gun could tow behind a trailer. 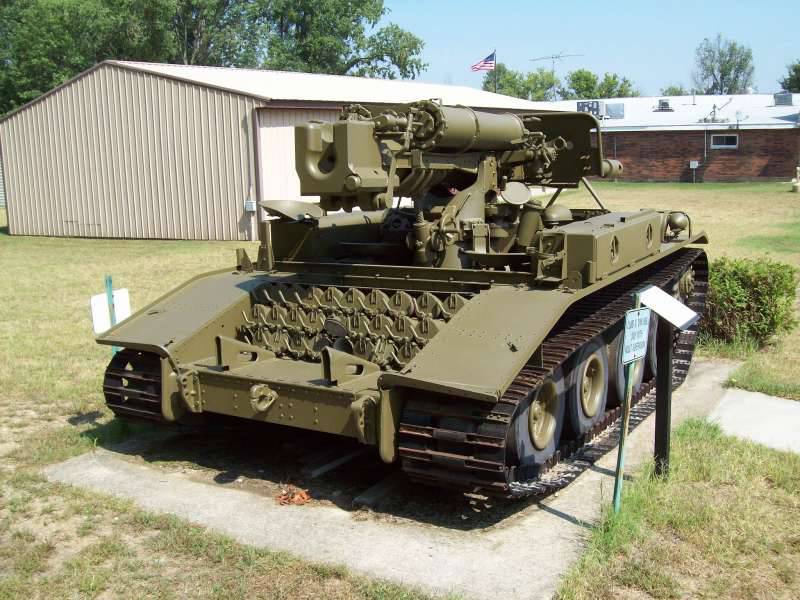 The M56 anti-tank self-propelled gun was driven by a 6-cylinder gasoline engine of Continental air-cooled 205 horsepower. (151 kW). This powerplant was enough to provide the car with a maximum travel speed in 45 km / h. Also on the self-propelled gun was installed hydromechanical transmission company "Allison". Self-propelled guns could cross the ford to the 1,05 meter or the 1,5 meter with additional equipment, but, despite its small mass, it was not floating.

The running gear of the self-propelled gun consisted of road wheels with pneumatic tires (on the 4 of the rink on board) which were simultaneously supporting, individual torsion suspension, front-wheel drive wheels and rubber-metal tracks 510 mm wide. Caterpillar "Scorpion" consisted of two ribbons, made of special rubberized fabric and reinforced with steel cables. Caterpillar bands were connected to each other by steel stamped crossbars with rubber pads. All road wheels were equipped with pneumatic self-gluing tubeless tires. In addition, each of the rollers was pressed using a double torsion of small length, which was made in the form of a pipe with a rod located in it. Also in the suspension self-propelled guns were used hydraulic shock telescopic type. The use of such a chassis allowed the designers to achieve the required ease and quietness of the course, the pressure of the machine on the ground was very low - 0,031 MPa. This allowed the M56 to overcome swampy, muddy, sandy or snowy ground without any problems. 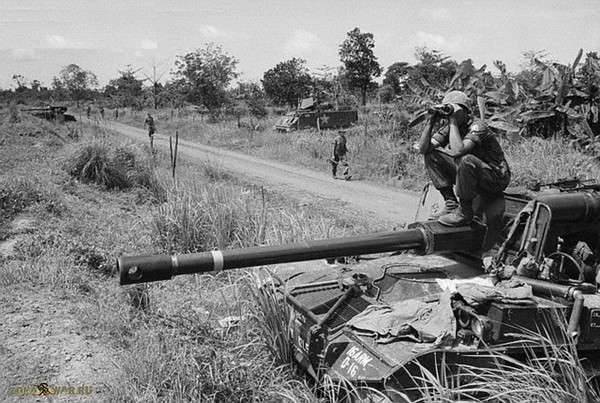 The crew of the self-propelled unit consisted of 4-s people. In this case, the driver was the only one who had some kind of workplace. He was located in front of the left and on the march he looked ahead through the glazed part of the shield of the gun. Behind the driver was the seat of the commander, who was also a radio operator at the same time. During the battle, he usually took up space on the ground next to the machine. To the right of the 90-mm guns located gunner. Behind him, a loader worked on a hinged platform that fed the shells from the ammunition located under the floor of the gun mount. For driving self-propelled guns at night, a driver could use binoculars for night vision, which was worn on his helmet.

We can say that the M56 Scorpion self-propelled gun was a compromise between obtaining a powerful self-propelled artillery gun and reducing the weight to acceptable parameters. The result was that the self-propelled chassis could not cope with recoil when firing 90-mm guns. Self-propelled jumped up and strongly squatted on the stern. It was impossible to speak of any shooting on the move, it was possible to fire at the target only from a complete stop. The lightweight airborne amphibious tank M56 General Sheridan, which replaced the M551 Scorpion, had the same problem - strong recoil when fired due to the light weight of the tank. 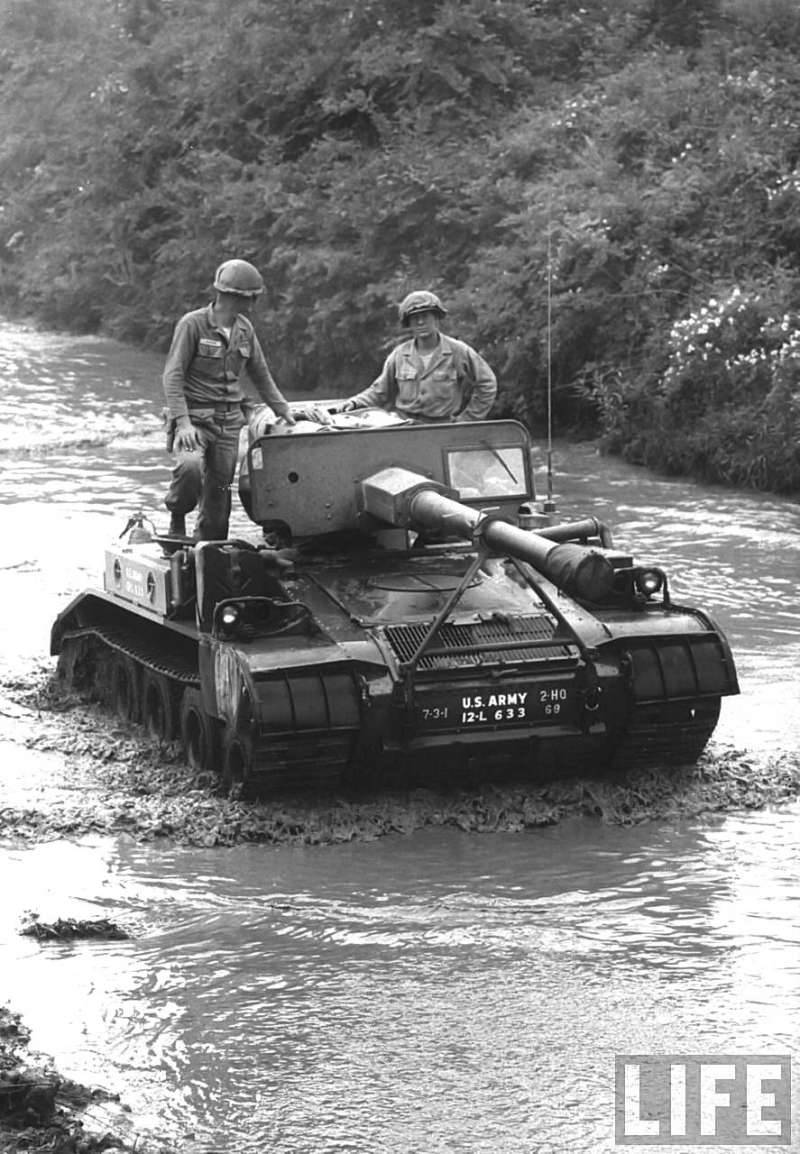 In May 1959, the release of the M56 Scorpion self-propelled gun was stopped. In this case, there were projects to install on this chassis 106-mm recoilless guns. Also, the PT-SAU tracked base was to be the basis of a multi-purpose chassis for creating 81-mm and 106-mm mortars, a floating armored personnel carrier, a quad-rifle 12,7-mm machine gun, as well as ATGM launchers.

Performance characteristics of the M56: