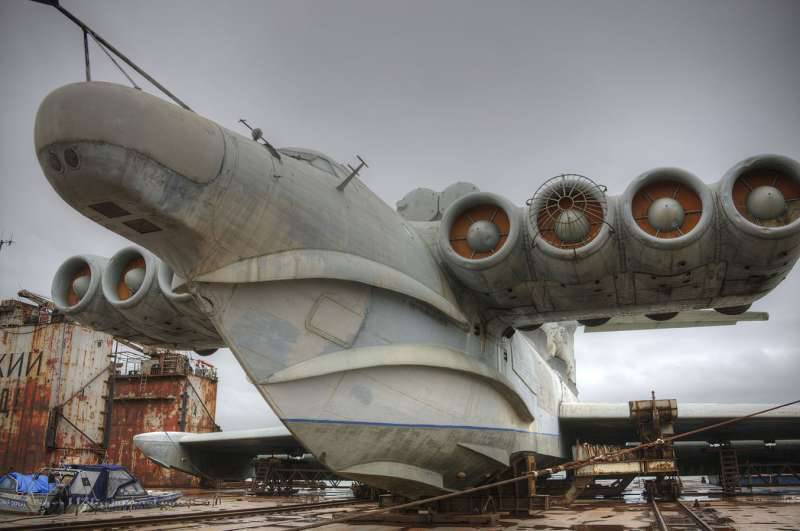 With all due respect to Alekseev, Lippish and Bartini, constantly flying in takeoff mode is bad, damn uneconomical and deadly. The altitude is very useful for the aircraft, the health of its crew and passengers.

All the benefits of the screen effect (an increase in lift when flying a few meters above the surface) are leveled by the resistance of the dense layers of the atmosphere, aggravated by the design of the “sea monsters” themselves.

They need the whole "festoon" of engines to exit on-screen mode, which entails obvious trouble:

A) The deterioration of the aerodynamic appearance compared to a conventional aircraft (smooth cigar-shaped fuselage, only two or four engines).

B) Catastrophic fuel consumption in takeoff mode. Ten jet engines of KM ekranoplan burned at the start of 30 tons of kerosene!

C) Part of the engine was turned off when entering the on-screen mode and then messing around as a useless “ballast”.

Each of the “Lunya” engines, together with the fuel fittings and the engine nacelle, weighed four tons. And he had eight of these!

To expand the possibilities of using WIG in stormy weather and safe take-off with overcoming hydrodynamic resistance at speeds of hundreds of kilometers per hour, their design should have increased strength, like the hulls of ships. All this is a direct violation of the theory of LA, where there is a struggle for every kilogram of weight. 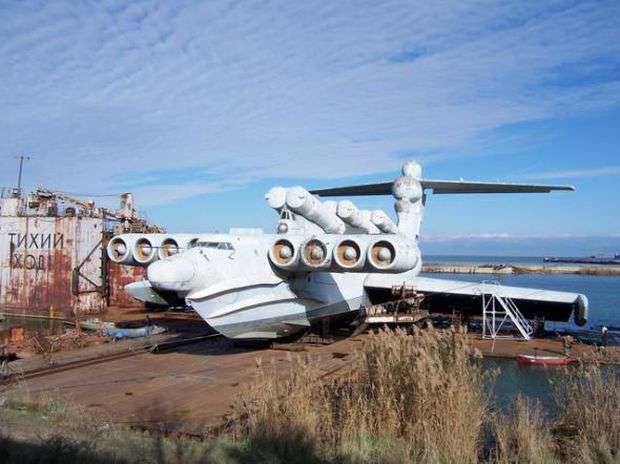 Plus, the fuselage with the characteristic ship contours and bulky not retractable hydrolic for landing on water and maintaining stability on the water.

Yes, that is why the unfortunate “Eaglet” with the same payload with the An-12 had 1,5 times lower speed and half the flight range. He lifted all 20 tons, with a dry weight of his 120 design tons! For comparison: the An-12 created twenty years before it lifted the same load with the total weight of the entire 36 tons.

That is why the "Lun" ekranoplane did not have enough combat radius to cross the Caspian Sea. After that, someone suggests using similar ECPs to pursue aircraft carriers in the Atlantic. Himself is not funny?

That is why the modern EKP “Aquaglide” has the same capacity (400 kg) as the Cessna-172 created half a century ago. At the same time, “Cessna” for some reason (surprise!) Is satisfied with a motor of half the power (160 versus 326 hp) and, of course, has a great speed.

All these figures are unlikely to impress the public. Fans of this type of technology will continue to deny the obvious. As usual, all failures will fall down. not on the objective difficulties encountered when flying in dense layers of the atmosphere, and the lack of modern engines, materials and calculations.

But if the perennial “calculations” show that it turns out stupid, it would be strange to continue to solve something.

In the future, new lightweight materials and economical engines will appear, but the situation will remain the same. With the introduction of new technologies, the aircraft will once again show their complete superiority over ekranoplanes.

WIG enthusiasts are saddened by the comparison of EPC with aviation and ships. In their opinion, this ingenious “monster” exists in a separate reality and, due to its genius, cannot compete with existing modes of transport.

Different types of transport is quite necessary and can be compared, because Railways is quite a competitor to Aeroflot and is fighting for a single client. And suddenly some RosEkranoplan wedged into this pair and said that it would be able to carry everyone faster, cheaper and safer. Will RosEkranoplan be able to squeeze out a significant chunk of the shipping market from Russian Railways or Aeroflot?
Comment by Alex_59

Being unable to bring counter-arguments of a technical nature and explain the advantages of flying at low altitudes, ECP fans refer to other types of technology. Allegedly, they also experienced unbearable torment during their implementation.

Replace in this article with an airplane "ekranoplan", change the date to 1903 year, and it will look like the truth.

Only the truth is different there.

Airplanes had enough 10 years to transform into a full-fledged air force. Without the participation of which any military conflict became unthinkable. Despite the wretchedness of the design of the first "bookshelves", their advantages were so great that they could not leave anyone aside.

A reliable mechanism for skewing the screws was barely created - helicopters went massively into the series. “Sikorsky R4” has been actively used in combat since April 1944. The Germans with the 1944, acted helicopter "Drache" c squadron anti-submarine helicopters Fl.282 "Hummingbird". Highly appreciating the car, the command Kriegsmarine immediately issued an order for 1000 such "birds".

The ability to take off from any “patch”, hover in place and move the overall cargo on the external sling - the properties of helicopters are invaluable.

And what can ekranoplan offer?

The only achievement of the creators of the "monsters" was that, at the cost of incredible effort, they still able to lift into the air that, by nature, should not fly. Not paying attention to costs, relying on the endless funding from the state.

The question of why and why create difficulties out of the blue remained unanswered.

Probably, it was fun to drive the 500-ton “barn” across the Caspian with the help of a “string” of 10 jet engines from supersonic Tu-22 bombers. 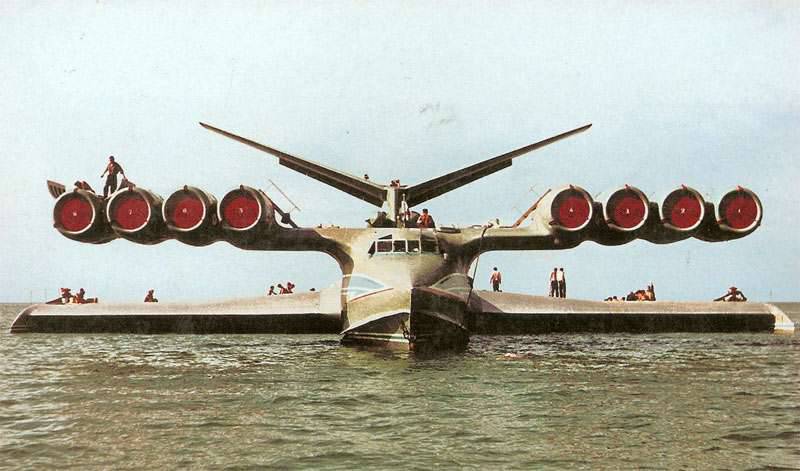 The inadequacy of the 10 motor “monster” was evident even at the stage of primary calculations. But it still embodied in the metal. And, apparently, the experiment was considered successful. Crazy ideas of the “Caspian Monster” were developed in the form of an EKNE "Lun" with eight engines from the wide-body IL-86 airliner.

Comedy with ekranoplans lasted more than half a century, but it could not last forever. Having received the results of the practical operation of these machines, including 140-, 380- and 540-ton "monsters", customers from the Navy, in the end, covered up the unpromising direction.

At times lower speed and payload with the same take-off weight, triple fuel consumption, the impossibility of flying over land - all that distinguishes the WIG from a normal aircraft.

An ekranoplan is ideal for disembarking scout groups - the roar of 10 engines will be heard all along the coast.

About stealth on radars when flying at low altitude: what prevents a missile carrier bomber from doing the same trick? Sneak up to the goal at extremely low altitude at twice the speed than RPC?

Contrary to the rumors about the safety of WIG, “which, when engine fails, immediately land on the water,” in reality, they fight no less than ordinary aircraft. Of the eight large “Alekseev” monsters, four were smashed, including two catastrophes with human victims.

EK pilots do not have saving seconds to assess the situation and level the car. One awkward movement of the steering wheel - and the tail will break off from the impact on the water at 400 km / h. If you take the steering wheel a little over yourself - separation from the screen, loss of stability, loss of control over the car, disaster, death.

Manageability becomes an even bigger problem. Due to the impossibility of making bends with a deep roll, the turning radius of the “Lunya” at cruising speed was three kilometers! Now let the most desperate people try to “get through” the curvature of the river on an 380-toned WIG. Or evade a tug unexpectedly arising directly at the rate.

The only scope of ECP today is a water attraction for spoiled tourists who are tired of riding banana and hydrolic.

The idea of ​​an ekranoplane does not carry the slightest common sense. Flying at an ultra-low altitude can only worsen all, without exception, the characteristics of the aircraft. Just as a weight tied to the leg will never contribute to an athlete’s running speed. You can recalculate again and make a weight of carbon, but the weight will remain a weight. The main question is why is she on the foot at all if you can live without a kettlebell?

History with ekranoplan is an interesting social experiment. How easily people believe in all sorts of nonsense. And when trying to point out the obvious fallacy of their judgments, they are ready to violently uphold an absurd point of view, accusing their opponents of betraying national interests.

And then they are surprised how Kashpirovsk and MMM could appear.

Those who call for the revival of work on the creation of heavy WIG, are divided into two categories. The first ones are impressionable inhabitants who liked the sight of a low-flying “super-airplane” with a dozen roaring engines. Being confident that they are right, they do not notice the shortcomings and invented the imaginary merits of ECP on the move.

The second represent a group of interests of serious people. Which everyone understands perfectly well, because they are trying to launch a knowingly ineffectual, therefore, a lengthy and expensive project, “sawing” with this a decent amount of funds. 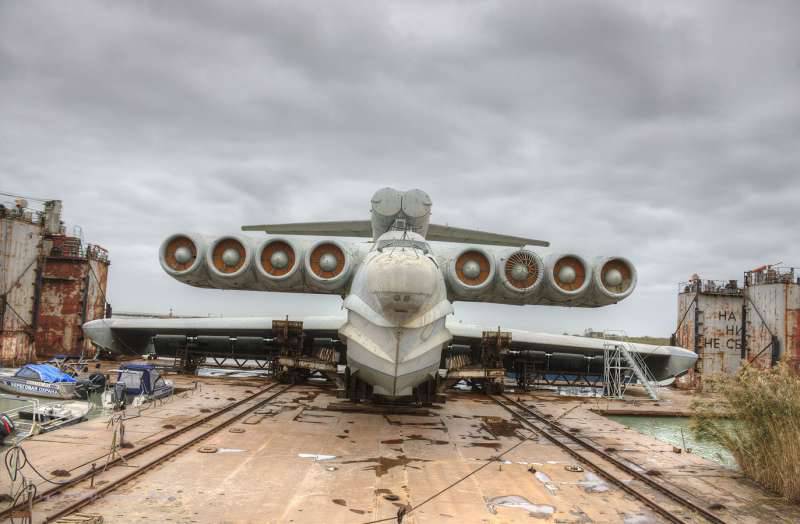 Ctrl Enter
Noticed oshЫbku Highlight text and press. Ctrl + Enter
We are
What to replace the wig?Flying over the waves
409 comments
Information
Dear reader, to leave comments on the publication, you must to register.