Member of the Civil War in Russia - who is he? 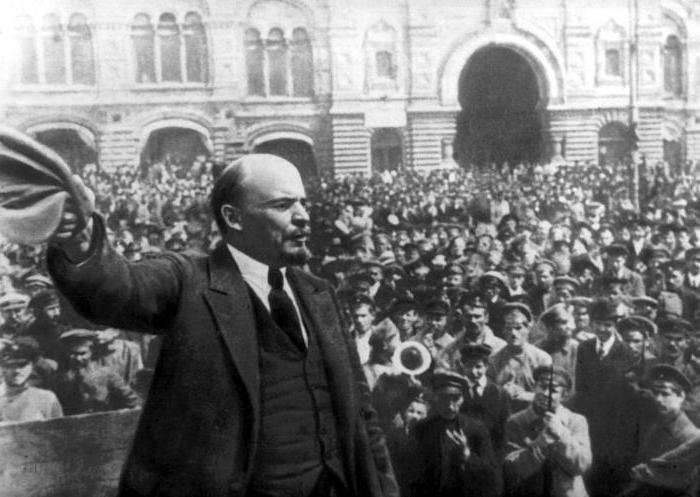 The civil war, the beginning of which is officially considered to be the 1918 year, is still one of the worst and bloodiest pages in stories our country. Perhaps, in some ways, it is even worse than the Great Patriotic War of 1941-1945, as this conflict suggested an incredible chaos in the country and the complete absence of the front line. Simply put, a member of the Civil War could not be sure even of his close relatives. It happened that whole families destroyed themselves because of the fundamental differences in their political views.

The history of those events is still full of secrets and mysteries, but the average man in the street rarely thinks about them. Much more interesting is the other - who was the ordinary participant in the Civil War? Is propaganda of those times right, and red is an animal-like peasant, dressed almost in the skin, white is an ideological “Mr. officer” with the views of an idealist, and green is a sort of anarchist anarchist Makhno?

Of course, everything is much more complicated, since such a division exists only on the pages of the most radical historical books, which now, unfortunately, still continue to be used to desecrate the history of our country. So of all the most difficult periods, the Civil War continues to be the most obscure. The causes, participants and consequences of this conflict continue to be studied by venerable scientists, and they still make many interesting discoveries in the field of history of that period.

The first period of the war 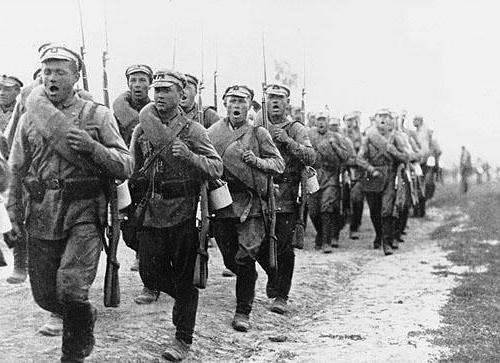 Perhaps the most homogeneous was the composition of the troops, except in the very first period of the war, the bright prerequisites of which began to manifest as early as 1917. During the February Revolution, a huge number of soldiers turned out to be on the streets, who simply did not want to go to the front, and therefore were ready to overthrow the king, and make peace with the German.

The war deeply oppressed everyone. The devilish attitude of the tsarist generals, theft, illness, the lack of everything most necessary — all this pushed more and more soldiers to revolutionary ideas.

Paradoxes of the prewar period 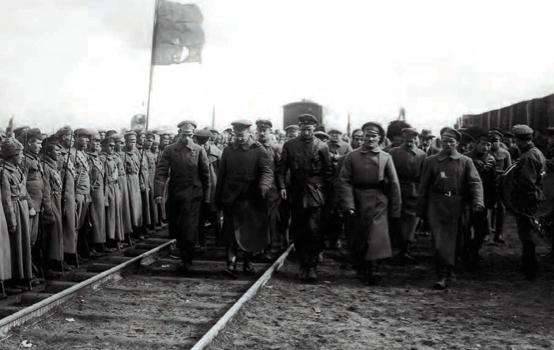 The beginning of the Soviet period, when Lenin promised peace to the soldiers, could have been marked by a complete cessation of the influx of veteran front-line soldiers into the Red Army troops, but ... On the contrary, the entire 1918 year all parties to the conflict regularly received a massive influx of new soldiers, almost 70% of whom had previously fought on the Russian fronts -German war. Why did this happen? Why did a member of the Civil War, who barely escaped from the hateful trenches, again wanted to take up a rifle?

Why, wanting peace, did the soldiers go to war again?

There is nothing complicated. Many of the experienced soldiers were in the army for 5, 7, 10 years ... During this time, they simply relieved themselves of the vicissitudes of peaceful life. In particular, the soldiers have become accustomed to, that they have no problems with food (they, of course, were, but rations were almost always given out), that all questions were simple and clear. Disappointed in the peaceful life, they again and eagerly took up weapon. In general, this paradox was known long before the Civil War in our country. 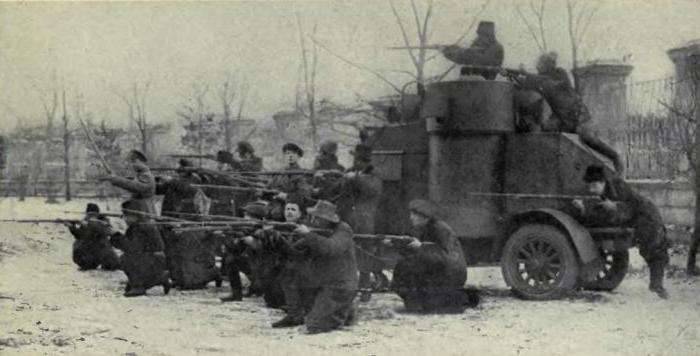 As the participants of the Civil War in Russia later recalled (regardless of their political views), almost all the major formations of the Red and White armies began in the same way: a certain armed group of people gradually assembled, to which the commanders later joined (or left their own environment).

Very often, large military formations were obtained from self-defense detachments or certain groups of military service, seconded by the Tsarist officers, to guard some railway stations, warehouses, etc. Former soldiers were the backbone, noncommissioned officers, and sometimes " full-fledged "officers, for one reason or another, were separated from those units that they commanded initially.

The most interesting thing was if the participant in the Civil War was a Cossack. There are many cases where the village for a long time lived exclusively raids, terrorizing the central regions of the country. Cossacks most often deeply despised the "uncouth men", reproaching them with their "inability to stand up for themselves." When these "men" were finally brought to "condition," they also took up arms and recalled all the insults to the Cossacks. So began the second phase of the conflict.

During this period, the participants in the Civil War in Russia became increasingly heterogeneous. Previously, former royal soldiers were the backbone of various gangs or “official” military formations, but now a real “vinaigrette” was rolling along the roads of the countries. The standard of living has finally dropped, and therefore all without exception were taken for weapons. 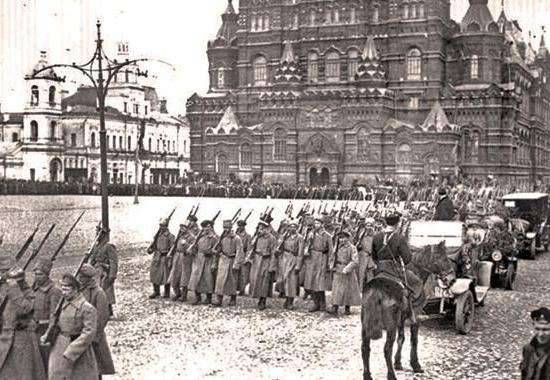 The “special” participants of the Civil War of 1917-1922 belong to the same period. We are talking about the so-called "green". In fact, they were classical bandits and anarchists, who have a golden time. True, they were very disliked by both the red and the white, and therefore they were shot immediately and on the spot.

A separate category is the various national minorities and the former outskirts of the Russian Empire. There, the list of participants was almost always extremely homogeneous: this is the local population, deeply hostile to the Russians, regardless of their color. With the same gangsters in Turkmenistan, the Soviet government dealt with almost until the beginning of the Great Patriotic War. Basmachi were stubborn, received financial and "gun" feed from the British, and therefore did not particularly misery. Participants in the Civil War 1917-1922 on the territory of present-day Ukraine, they were also very diverse, and they had very different goals. In most cases, it all boiled down to attempts to form their own state, but such a confusion reigned in their ranks that nothing sensible in the end came out. The most successful were Poland and Finland, which nevertheless became independent countries, having received their statehood only after the collapse of the Empire. The Finns, by the way, again differed in the extreme rejection of all Russians, not much behind the Turkmen.

It must be said that around this period there were many peasants in the ranks of all the armies of the Civil War. Initially, this social stratum did not participate in hostilities at all. The participants of the civil war (red or white - no difference) recalled that the initial centers of armed clashes were reminiscent of tiny dots, surrounded on all sides by the “peasant sea”. What forced the peasants to take up arms? In many ways, this result has led to a permanent drop in living standards. Against the background of the strongest depletion of the peasants, more and more people were willing to “requisition” the last grain or cattle. Naturally, such a state of affairs could not persist for a long time, and therefore initially inert peasantry also entered the war eagerly. Who were these participants in the Civil War - white or red? In general, it is difficult to say. Peasants were rarely puzzled by some difficult questions from the field of political science, and therefore often acted on the principle "against all". They wanted all participants in the war just to leave them alone, finally ceasing to requisition food.

Again, at the end of this confusion, the people who formed the backbone of the armies also became more homogeneous. They, like the participants of the Civil War 1917, were soldiers. Only this has already been people who have gone through the harsh school of civil conflict. They became the basis of the developing Red Army, many talented commanders emerged from their ranks, who subsequently stopped the terrible breakthrough of the fascists in the summer of 1941.

It remains only to sympathize with the participants of the Civil War, since many of them, having begun to fight as early as World War I, never saw a peaceful sky over their entire lives. It would be desirable to hope that our country will not recognize the upheavals like this war. All countries whose population fought with each other in certain periods of history have come to similar conclusions.

Ctrl Enter
Noticed oshЫbku Highlight text and press. Ctrl + Enter
We are
The Union of Competitors: Makhno and Ataman PetlyuraWhy anarchism in Makhno was reborn in the kulaks
58 comments
Information
Dear reader, to leave comments on the publication, you must to register.