February 18 2016
81
The closer the two-year anniversary of the “revolution of dignity” comes, the more actively Kiev generates political news. Two years after the Maidan, most Ukrainians only began to figure out who included in what political coalitions, how many stars and bands for radical Maidan events they received for epaulets, and how many times the country experienced 21 February 2014. Understand just started, and here - a new political tectonics. She is shaking Ukraine in such a way that each of those stuck in power tries to prepare an alternate airfield or at least inflate a life jacket in order to save his own seat from a powerful tsunami.


First (this is what rich Maidan experience means) Yulia Tymoshenko decided to take care of the rescue boat, on the eve of which she called the ruling parliamentary coalition a pack that has no chance. According to Tymoshenko, the current government is not going to carry out cardinal reforms, is not ready to reformat the political system, and this is fraught, as she put it, with “uncontrolled unrest”, making it clear that unrest in Ukraine has so far been strictly controlled ... eyes image of the baker Nuland, to ask: “controlled by whom?” is naive.

Tymoshenko, who got rid of her usual scythe on her head, said that the “Batkivshchyna” headed by her is leaving the coalition. Right there in Ukraine such a demarche of Tymoshenko was called by certain citizens the flight of rats from a sinking ship. And once again, this ship is sinking, no one specifies how it doesn’t specify why instead of a bright “European” future vessel, led by two Ukrainian captains, they rushed to the same reefs, which they had repeatedly in their newest stories came across. And the outcome of such meetings with the reefs were different. The latter, as is well known, led to the fact that the "captain" had to be rescued, throwing him a life ring from another ship ...

At the time of preparing the material, one of the Maidan captains was still trying to grab the steering wheel, although it was clear: not a tenant ... The VRU deputies were offered to vote at the beginning of the week for Prime Minister Yatsenyuk’s resignation, but from the first time Arseny Petrovich didn’t perform an act of political euthanasia.

At the same time, President Poroshenko is trying to put out the flames of the political fire “with pies and pancakes”. To demonstrate that he, too, as if for “reformatting”, this week suggested that Prosecutor General Shokin and Yatsenyuk resign. First, the Ukrainian press reported that Viktor Shokin after the appeal of President Poroshenko actually wrote a letter of resignation, but then it turned out that Mr. Prosecutor General had gone on leave. It is understandable - in the political arena of Ukraine it's time to leave ...

In the Russian Federation Council decided to comment on the events that occur a few days before the "celebration" Maidan events. So in "Izvestia" Appeared material, which contains the opinion of the first deputy chairman of the committee of the Council of the Federation of the Federal Assembly of the Russian Federation on international affairs, Vladimir Dzhabarov. He says that the Maidan-3 looms ever clearer for today's Ukraine, and that his (Maidan) is unable to postpone even the resignation of the current prime minister and ministers of the Cabinet.

If you believe the publications of sociological monitoring services in Ukraine, Yatsenyuk’s resignation is something for which the Ukrainian people (its overwhelming majority) have long expressed themselves with both hands. At the same time, most citizens of “Square” would like to see Mikheil Saakashvili as a Yatsenyuk changer.

In this regard, it is not without interest to refer to the current rhetoric of Saakashvili himself, who managed to gain considerable political weight, despite all the statements of the opponents that Misha is a “sent kazachok”.

According to the ex-president of Georgia and the current head of the Odessa Regional State Administration, an oligarchic coup has been accomplished in Ukraine, no less. From Saakashvili's publication in Facebook from February 17:

My appeal to the members of the BPP ("Petro Poroshenko Bloc") in connection with the oligarchic coup.

Yesterday something happened that always inevitably happens when after the revolution there are no revolutionary reforms - the restoration of the old regime. In my opinion, an oligarchic coup took place in the country yesterday. Just as after the failures of the Orange Revolution, Yanukovych came to power, yesterday Akhmetov and other oligarchs, leaving the government with their votes, again took control of the situation.

In any case, this would mean that even those members of the faction who voted for the resignation of the government, in the event of not leaving the coalition, take full formal responsibility for the yesterday's oligarchic coup.

After a whole series of mutual political accusations and urges to the next scuffle, the parliamentary hall of the VRU was empty. By the middle of the day (Wednesday), there were no more than a hundred people left in it - mainly the people's deputies from the Poroshenko block. Neither the Timoshenkov's “Batkivschyna” nor the “Self-help” at the meeting “from the buffet” have ever returned, and the speaker Groysman was forced to announce that “Rada’s work has been completed for today”. This is the first time in a long time when I never made a single legislative decision, although the people's deputies received wages for February 17 ...

The most interesting thing is that while Tymoshenko and representatives of “Self-help” talked about leaving the coalition, Poroshenko’s “falcons” suggested discussing the topic “Russia's aggression” in the 100500 time. However, even this joker in the BPP sleeve did not act on the “coalition”, although until now it has always played the only possible consolidating role in the Rada. 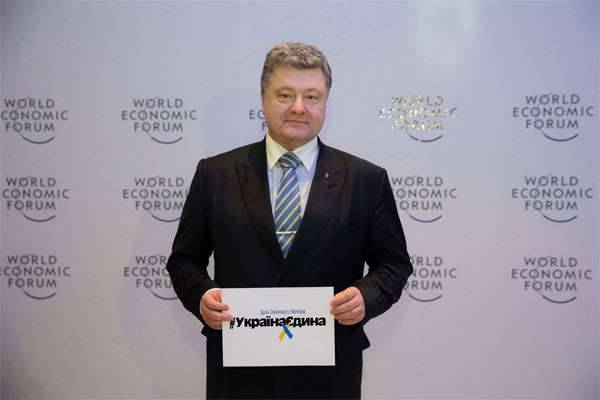 At this time, government ministries were trying to prove to the people of Ukraine that it was the work of one or another ministry that deserved applause. In terms of focusing on the nationwide recognition of "success", the Ministry of Defense, led by Field Marshal Poltorak, succeeded more than others. The Ministry of Defense decided to rally the Motherland by demonstrating a whole film about how the Ukrainian army (without a doubt, valiant) achieved the greatest peremoga in Debaltseve. In the annotation to the film prepared by the General Staff, it is told that when leaving the Debaltsevskiy bridgehead they died (attention! - new data from Muzhenko) 13 Ukrainian military ... It was 13 ... And not 180, which Poroshenko spoke about earlier, and certainly not thousands of 1,5, as stated by the leaders of the radical groups in Ukraine, who themselves had fled from the militia in the area of ​​Debaltseve and Uglegorsk.
The heroic drama about how the Ukrainian army triumphantly retreated "to prepared positions in advance" clearly claims to be nominated for an Oscar in several nominations at once (the film is in Ukrainian, but the peremptory pathos is clear without translation):