February 17 2016
39
South Korea continues to strengthen its defense capability with the help of its American allies, one of the key agreements is the deployment of the THAAD missile systems in the republic, reports Kommersant. 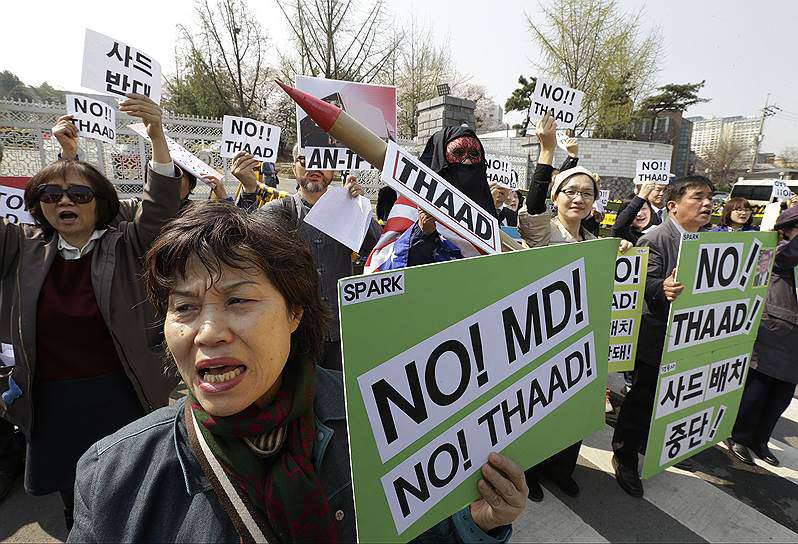 RK President Park Geun-hye said yesterday that "Seoul will take tough and more effective measures so that North Korea realizes with bitterness that by developing a nuclear program, it will not survive and this will only accelerate the collapse of the regime."

“China’s launch of a North Korean missile created almost more long-term problems than Pyongyang itself. The prospect of the emergence of the THAAD complexes in South Korea caused moderate discontent in Moscow and a stormy one in Beijing, ”the newspaper writes.

"The range of the system is much longer than is necessary to protect the Korean Peninsula," said Hong Lei, a spokesman for the Chinese Ministry of Foreign Affairs. “We firmly disagree with an attempt to damage Chinese strategic security interests, using the nuclear problem as an excuse.”

At the same time, they say in Seoul that the complex does not pose any threat to China and Russia: “it is not capable of shooting down intercontinental ballistic missiles and seriously affecting the nuclear potential of either side”.

“The THAAD system has a missile strike range up to 200 km and is formally unable to reach Chinese territory at any potential location. But the AESA radar that comes with it can fix aircraft in 1,8 radius thousand km. This means that not only the whole East China, but also Khabarovsk, Vladivostok and Birobidzhan will be potentially "shining through", notes Kommersant with reference to the source.

The source of the publication in the Ministry of Defense of the PRC confirmed that "it is the radar that causes the main fears of the Chinese authorities." “In this, our and your governments are similar, they both expressed concern. For China, this is the same thing as for Russia, the elements of the US missile defense system in Eastern Europe, ”he added.

“Most of the Chinese nuclear potential is medium-range missiles,” explained Vasily Kashin, senior researcher at the Institute of the Far East of the Russian Academy of Sciences. “In the event of a conflict, the Chinese planned to use these missiles to strike at American bases in Japan, the Philippines and Guam.” Now, missiles from bases in the north-east of the country will pass through the THAAD “window”, which can at least detect them and, at the most, knock them down. ”

By its tests, Pyongyang gives the USA a reason to increase its military potential in the region.

“Under the pretext of protection against North Korean missiles, Japan has already deployed a missile defense system,” Vasiliy Kashin reminds. - In 2006, after the first North Korean nuclear test, Tokyo asked Washington for security assistance. By 2016, Japan was already guarded by six ships with Aegis systems and SM-3 missiles, as well as PAC-3 batteries (with a range of up to 20 km), based near Tokyo and Okinawa. After the North Korean launch of 7 in February, Japan also announced the possible installation of THAAD and an increase in the number of ships with interceptors to eight by the year 2020.

Another expert, the head of the Asian program at the Carnegie Center, Alexander Gabuev, believes that Seoul is doing the right thing by trying to protect itself.

“If a person wears a bulletproof vest, he wears it not against someone, but to protect himself. If China, as he claims, is not going to attack the US bases in Japan, South Korea or anywhere else, then he has nothing to fear from THAAD, ”said Gabuev.

Ctrl Enter
Noticed oshЫbku Highlight text and press. Ctrl + Enter
We are
North Korea promises a “sea of ​​fire" in response to "provocations"The Dangerous Future of US Strategic Forces (PetroleumWorld, Venezuela)
39 comments
Information
Dear reader, to leave comments on the publication, you must to register.