February 18 2016
9
According to one of the latest polls, most Americans are disappointed with the US economic environment. They believe that the current system is unfair. Only the “powerful influential circles” in her are happy. Another survey found that the least confident in the future is the social group of Americans under the age of 34. Another survey allowed us to find out how much US citizens believe in the global superiority of their armed forces. Answer: almost half refused the US in the world military championship. Americans are disappointed in their own congressmen. 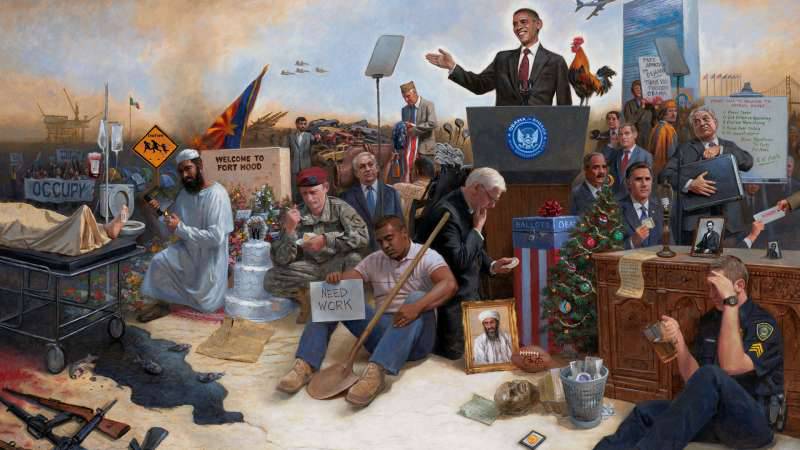 The site Pew Research Center published the results of a sociological survey on the topic of justice of the US economic system. In fact, this is the question that potential presidential candidates from both leading parties are now posing. Here is his wording: “Is the US economic system fair for most Americans, or does it“ play into the hands of ”the rich and powerful?”

Most Americans believe that the economic system is unfair and favors the success of influential circles. So thinks 65% of respondents. The injustice is that the system promotes the interests of "powerful" groups.

And the entire 31% believes that the system, "as a rule, is fair for most Americans."

Significant and something else. It turns out that among the polled high-income Republicans the probability of meeting those who find the economic system unfair is far from being as high as among Democrats. The economic differences within parties on this issue are striking, the authors point out.

Republicans who have household incomes of $ 100.000 and above are much more likely to argue that the system is fair for most Americans: 60% of Republicans with such an income expressed precisely this point of view.

Among the Democrats, the picture changes to the opposite. The economic system in the United States is unfair and is adjusted to the interests of powerful groups, say 82% of Democrats with a family income of $ 100.000 and above.

Disappointment in the economic system keeps pace with pessimism about the future.

Another study Pew Research Center allowed us to reveal that, despite the difference in race, ethnicity, diversity of opinions on a number of political and social problems, young Americans (Millennials generation) are strikingly similar in one thing: this young generation of US citizens is least confident in the future of the nation.

The survey revealed that 37% Millennials in total (18 years - 34 years) have “quite a lot of confidence” about the future of the United States. Unlike the Millennials, the Gen X generation (35 — 50 years) by 45% is confident in the future, the Boomer generation (51 year — 69 years) by 49% and the Silent generation (70 — 87 years) - by 56%. Thus, the American youth at the age of 18 - 34 is the most pessimistic part of the citizens of the United States and does not really believe in the bright future of the Motherland.

It is also interesting that Millennials’s future credibility decreases: earlier, young people were more optimistic. In 2014, 49% Millennials stated that the best years for the country were “ahead”, and 45% thought that they were already “behind”.

Poll already conducted Gallup Institute, showed that almost half of Americans do not believe in the global superiority of US forces.

Only 49% of respondents believe that the United States is the military power No. XXUMX. Another 1% claims the opposite.

The current figure is the lowest for the Institute's 23 year of polls on this topic. It is also interesting that in February last year 59% of citizens claimed that the United States is the leading military force in the world. There is a "significant reduction" indicator, stated in the text.

The fall in confidence in their own army at 10 percentage points, the researchers believe, probably reflects the anxiety of Americans about international terrorism faced by the country and which is considered one of the most dangerous threats. This is much talked about in the debates of the members of the presidential campaign.

But much lower is the confidence of American citizens in congressmen.

The institute notes that relatively low voter support for congressmen has been typical for the United States since 2006.

Today, both Democratic voters and Republicans have negative views on the re-election of congressmen. The rating (approval level) of the work of the Congress over the past five years has fallen below the bar in 20%.

Recent studies by sociologists demonstrate a sad fact for American citizens: Americans tend to distrust the politicians they choose; they do not see the real power in the army, which they hold for their taxes; they find no bright future ahead; do not consider the economic system fair.

Probably, the election campaign going on in the country influenced the negative assessments of citizens. Each of the potential presidential candidates tends to stick out the shortcomings of the system and the failures in the transformations carried out by the current president.

On the other hand, the pessimism of Americans regarding some issues, as research has shown, has been growing for decades.

Speaks for itself and the fact that the majority of US citizens established themselves in a single opinion: the current system "plays into the hands" of powerful people, and not at all to the people.

Observed and commented on Oleg Chuvakin
- especially for topwar.ru
Ctrl Enter
Noticed oshЫbku Highlight text and press. Ctrl + Enter
We are
Results of the week. "In the queue, sons of bitches, in the queue!"Results of the week. “Everything is strange and strange! Everything is wonderful and wonderful! ... "
9 comments
Information
Dear reader, to leave comments on the publication, you must to register.