February 17 2016
99
The American people are capable of thinking, and therefore will not elect Donald Trump as president. Being a president is not the same thing as participating in a talk show. So thinks Barack Obama. Trump responded to these speeches, calling the politics of Democrat Obama "lousy." In addition, the billionaire hit on fellow party members: he took and bought out a domain with the name of Jeb Bush. From now on, anyone who visits jebbush.com is being redirected to Trump's election resource. Trump did not recommend the other competitor, Mr. Rubio, to the Americans because he would "sweat" at the meeting with Putin. Meanwhile, the candidate Hillary Clinton, apparently having forgotten the human language, into the microphone ... barked. 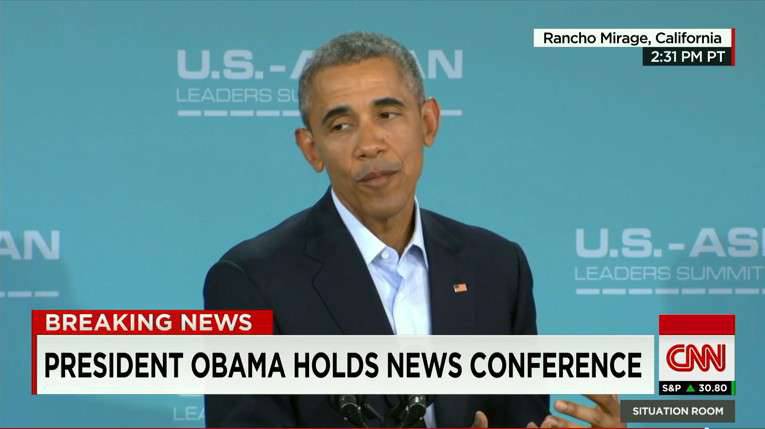 Obama at a conference in California. Video Frame: CNN

As transmits CNNPresident Barack Obama believes that it is more difficult to work for the presidency than to participate in a reality show, and the American people are “reasonable” not to vote for Donald Trump.

"As before, I believe that Mr. Trump will not become president," Obama said at a press conference in California, which took place after talks with leaders of Southeast Asia.

Barack Obama "believes in the American people." The presidency is “serious work” and not “talk show or reality show.” And this is not the place of "advertising and marketing." Being president is "difficult."

The presidency requires the leader to "difficult decisions", even if the people "do not approve of them," Obama believes.

The president also doubted that Trump could be trusted with the post of commander in chief, who is the president of the country. Nuclear missile launch codes are not something that Trump should trust. “The American people are intelligent enough, and I think that in the end people will make a rational choice,” the White House owner remarked.

Trump did not stay with the answer.

According to him, which also leads CNN, Mr. Obama at the post "did his job lousy." Therefore, he, Trump, criticizes Obama as a “big compliment.”

While Obama ranted and promoted Democrat H. Clinton, the Republican billionaire did something else. He got his hands on an unofficial network resource ... Jeb Bush. Bush, like Trump, is a Republican, but a successful businessman, presumably, thinks more in competitive categories than in parties. Moreover, it has long been known that Bush and Trump have opposing views on foreign policy. In particular, Trump has nothing (or almost nothing) against Putin and is even ready to make a coalition with him in Syria, and Bush believes that Putin is almost fighting in Syria with the civilian population on behalf of Assad.

As the "The Washington Times"billionaire Trump bought the domain of the site with the name of his rival - the former Florida Governor Jeb Bush. The article is called: "Jebbush.com redirects viewers to Donald Trump's website".

The newspaper calls such an original action a “blow” to Jeb Bush.

Having bought the domain name, Trump organized the redirection from www.jeb bush.come to his own website (Trump’s campaign manager). There the billionaire promises to "make America great again."

Mr. Trump is very hard on the Bush family, reminding the Americans that Jeb’s brother, former President George W. Bush, has unleashed a dubious war in Iraq. The World Trade Center was destroyed by terrorists under Bush too.

Surveys show that D. Trump is now leading among the competitors in the ranking of Republican voters. According to the latest data, Trump's figure is 35 percent, Ted Cruz and Marco Rubio have 18%, and Jeb Bush and Ben Carson have only 7 percent support.

At the same time, the billionaire attacked another Republican competitor, Marco Rubio.

An interesting story about this verbal attack is placed on the site. Washingtonexaminer.com.

Donald Trump said that Senator Marco Rubio is a bad choice. This man is no good for the presidency: he will “sweat” when he meets with world leaders like President Putin. And not just sweat, but the whole "shine" from sweat.

The billionaire made such a conclusion by observing Rubio’s speeches at a debate.

“He was all wet,” Trump said, watching Rubio in the last debate. - He was wet, and I said: what the hell is going on here? I thought he had just left the swimming pool. ”

According to Trump, someone who will have to deal with Putin, you can not sweat.

Mr. Trump earned applause at the Greenville rally with his “sweaty” theses.

Trump called for the presidential candidate to choose a man “who does not sweat.”

“You can imagine: Putin is sitting, waiting for a meeting, and this guy comes into the room, and he is like a catastrophe,” he added and said that you should choose the right person for such meetings, namely, Trump. If people choose Trump, they "will do very well."

In addition, the billionaire explained to those gathered that the time had come to establish better relations with Russia. He does not understand the critics of Russia.

“Donald Trump wants to work with Russia to get rid of ISIS? He asked, teasing his critics. “Yes, something like that.”

She had never been distinguished by a rich vocabulary, but now she has completely switched to the sounds of the animal world.

Following the link, you can listen to Hillary barking like a lap-dog.

Few people can blame the former secretary of state in an overly-thought-out scenario of his speech, ironically the publication.

“Jokes aside!” - writes the newspaper. She barked into the microphone, "like a dog." 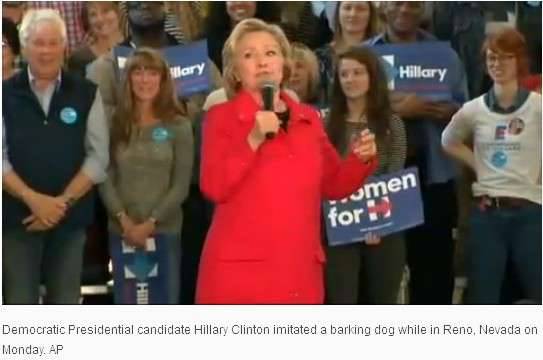 Lai honored her even with a special pop music video "Who Let the Dogs Out '- featuring Hillary Clinton." It is posted on YouTube. This is a 28-second video, in which the lady in red fits well. On YouTube, it quickly became popular: almost one hundred thousand views.

The book by Alexander Bard and Jan Zoderkvist “Netocracy. New ruling elite and life after capitalism ", first published back in 2000, the year. The co-authors assigned to the politicians in the netocratic (power-networked) future the role of clowns acting on the needs of the crowd. In the post-capitalist world, politicians are no longer the real agents of power, but serve only as puppets of the new ruling class — the netocrats.

It seems that the predictions of philosophers come true. And Mr. Obama, who claims that the presidency is not a talk show, is greatly mistaken.