The fate of a man - a journalist and militia 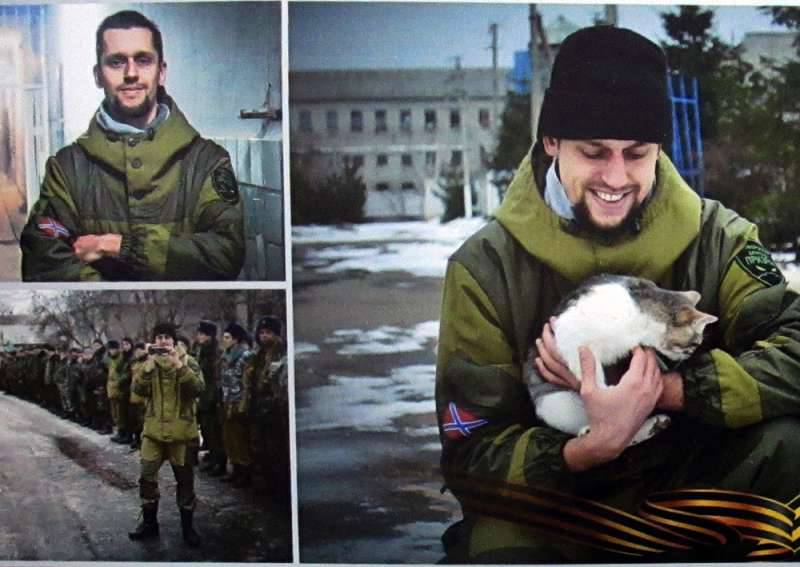 A year ago, the army of the Donetsk and Lugansk People's Republics in the course of a joint operation liberated the city of Debaltsevo, which was one of the outstanding victories of Donbass over ukrohuntoy. The fighting for Debaltseve, Uglegorsk and nearby settlements were heavy, bloody, and many fighters lost their lives in them.

This story is about one of them, Vsevolod Vyacheslavovich Petrovsky, 1986 year of birth.

There is in Petrovsky district in Donetsk - by the way, one of those who was and continues to be subjected to fierce shelling during the current war. It was named in honor of the revolutionary Grigory Petrovsky (however, in honor of him, Dnipropetrovsk received its name). And Vsevolod Petrovsky is his distant descendant. He lived a short but very bright life. Born in the town of Artyomovsk, studied in Donetsk, fell under Debaltseve ...

First Vsevolod, being at a young age, supported the first Maidan. I did not go to Kiev, but I took part in the election campaign of Yushchenko. First, the reason is Ukrainian “lessons stories", Which constantly refers to the" famine "," Soviet occupation "and the like. Besides, to be honest, under Kuchma’s power, not all was well. That was the young people in the Maidan ranks, eager for change.

Many Donetsk residents, who somehow knew Vsevolod, were very sorry that such an intelligent and erudite guy was suddenly on the orange side. And some of them even were surprised when they saw him at the anti-Maid rally near the Oblast City Administration building in the spring of 2014.

However, even earlier, long before the Donbass uprising, Petrovsky became disillusioned with the Maidan. He joined the left movement, adhered to the communist views. He struggled with the bearers of radical right views - sometimes it came to physical collisions. He was one of the founders of the anti-fascist youth association "Guernica". Consisted in the left organization "Borotba", but at the beginning of 2014, he came out of it, as part of this organization supported the second maidan. (Although, for the sake of justice, it should be noted that the other members of the Borotby are active supporters of Novorossiya).

At first, Vsevolod had differences on this basis with his parents who lived in the United States. It is not a secret what “information” about Donbass is presented there. However, with the beginning of the war, they not only understood everything, but also came to see their son in flaming Donetsk. But in one of the interviews, Petrovsky said with regret that his girlfriend took the promoted position and left for Kiev, from where it now broadcasts about “terrorists and separatists”.

The young man not only actively participated in political life - he played in “What, where, when,” he was fond of diggery, wrote articles about his native land, liked to explore the piles and often drove visitors to them. I wrote poems.

With the beginning of the war, the young man picked up a camera, a voice recorder, and began to conduct an informational struggle for Novorossia. First, as a blogger, then he was taken to work at the Ministry of Information of the DPR, and conducted a radio program. He was one of the most talented war correspondents. But even that was not enough for him, he wanted to go directly to the front. And in the summer of 2014, he became a militant fighter. He went to serve in the brigade "Ghost", to Alexey Brain, in Alchevsk. He chose a call sign, which is closely connected with the Donbass endless steppes - “Kovyl”.

On the night of February 8 in the hot battle for Debaltseve, he was killed when he rescued wounded soldiers with a group of comrades.

Ukrainian punitive fiercely fired at the fighters of New Russia. Those, in turn, were preparing for an attack and sent a reconnaissance group. The scouts came under heavy fire, many of them were injured. Vsevolod Petrovsky was one of those who went to the very inferno to endure the wounded. It was possible to do this, but he himself did not come out. An enemy fragment fell into his heart.

In Donetsk last week two events in memory of Vsevolod Petrovsky took place. One was at school No. XXUMX, where he studied, and the other at the history department of Donetsk National University, of which he was a graduate. There he is remembered as one of the best students.

It was there, at the faculty, February 11, a permanent exhibition was opened, which presented Petrovsky's personal belongings, documents, photographs, and theses. 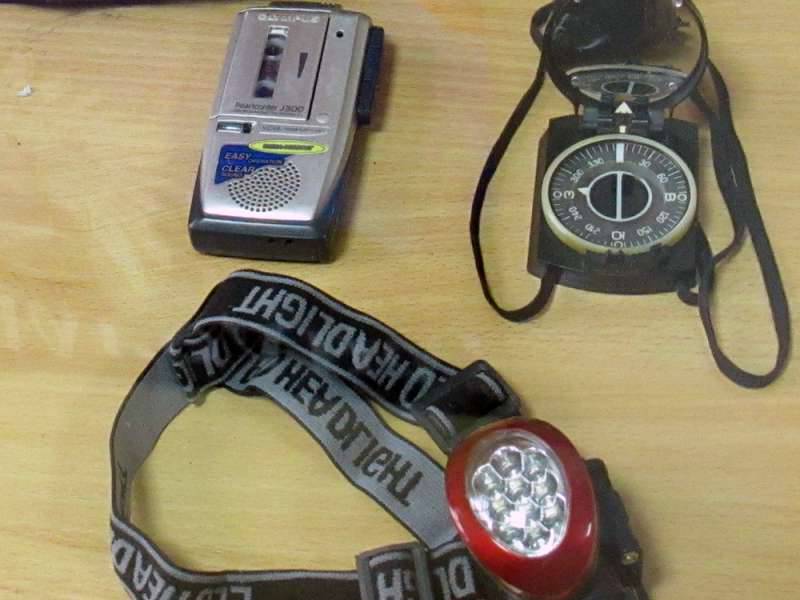 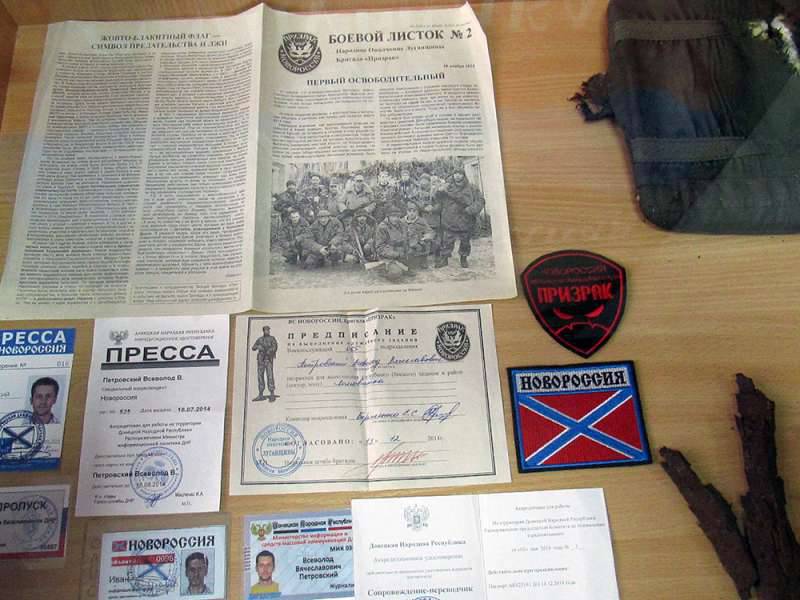 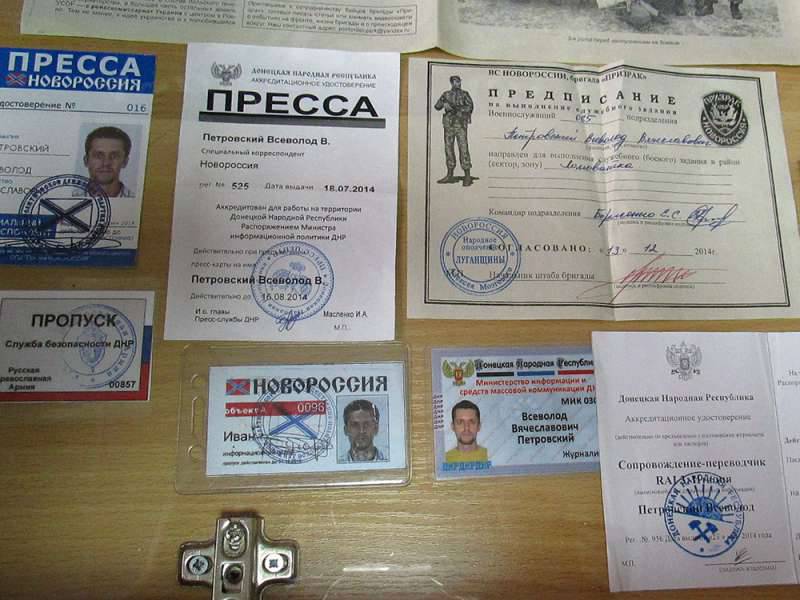 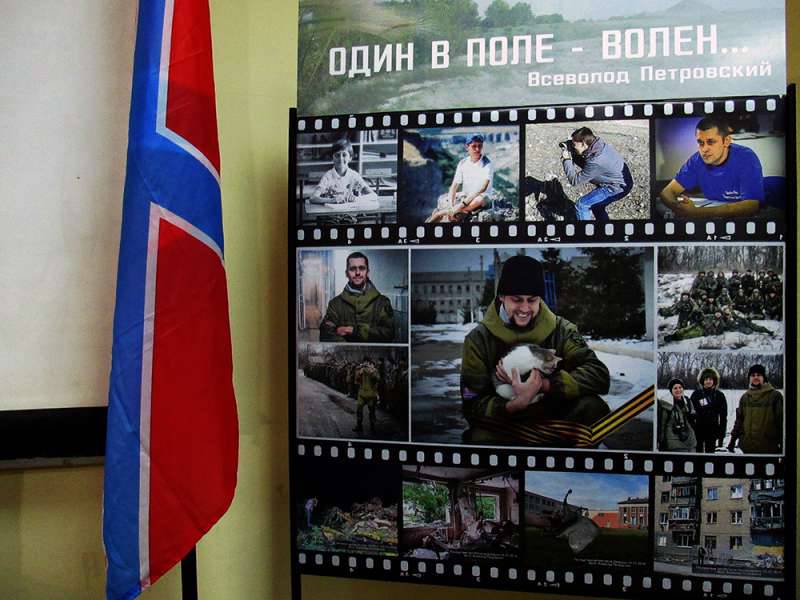 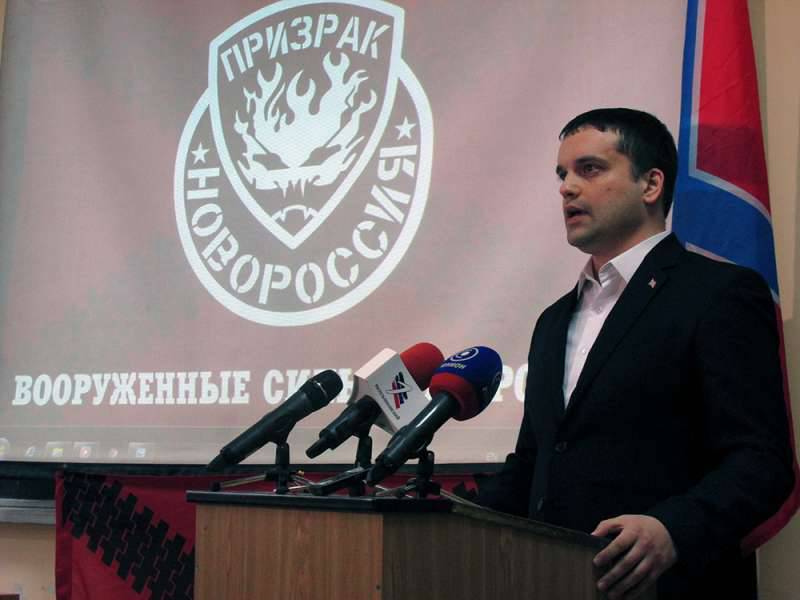 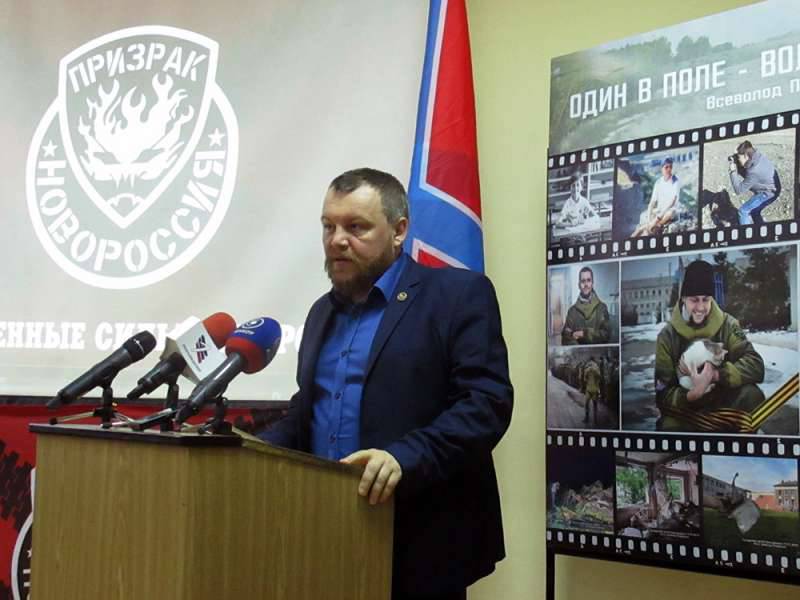 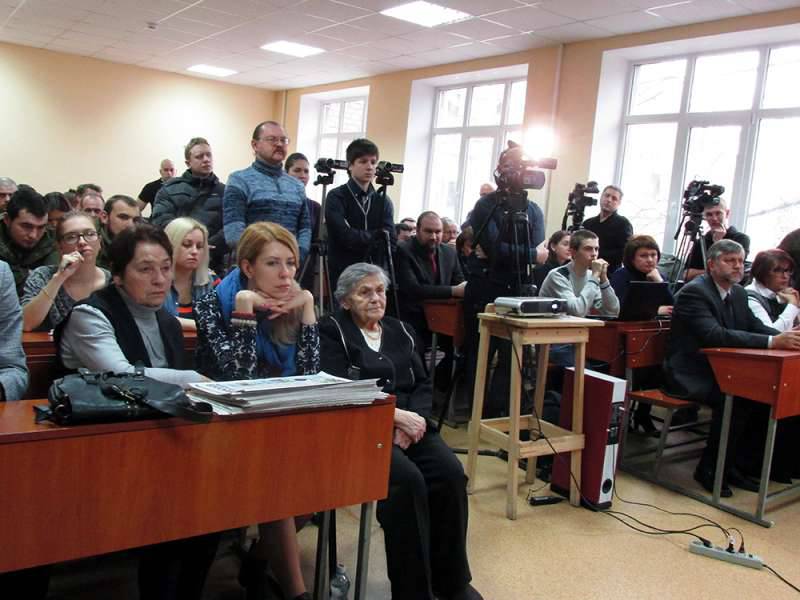 The parents of the fallen soldier, Vyacheslav Vladimirovich and Tatiana Avenirovna Petrovsky, were also invited to the event. Of course, they still cannot accept the loss of their son, but they are proud of him because he has fallen as a hero. According to parents, even time does not heal. But the memory of Vsevolod is also important as a reminder of the ideals for which he fought. 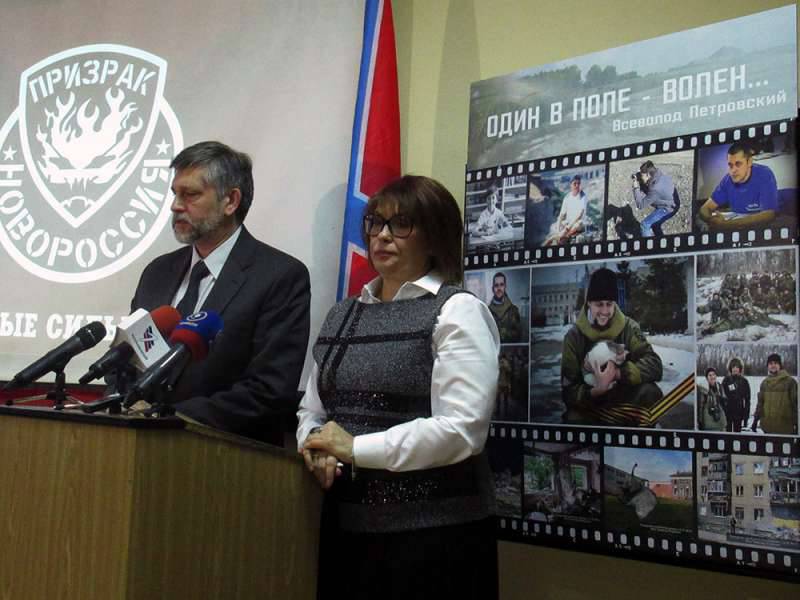 Bard Vladimir Pshenichny, who came from Russia, sang a song dedicated to the soldiers - the defenders of Novorossia. 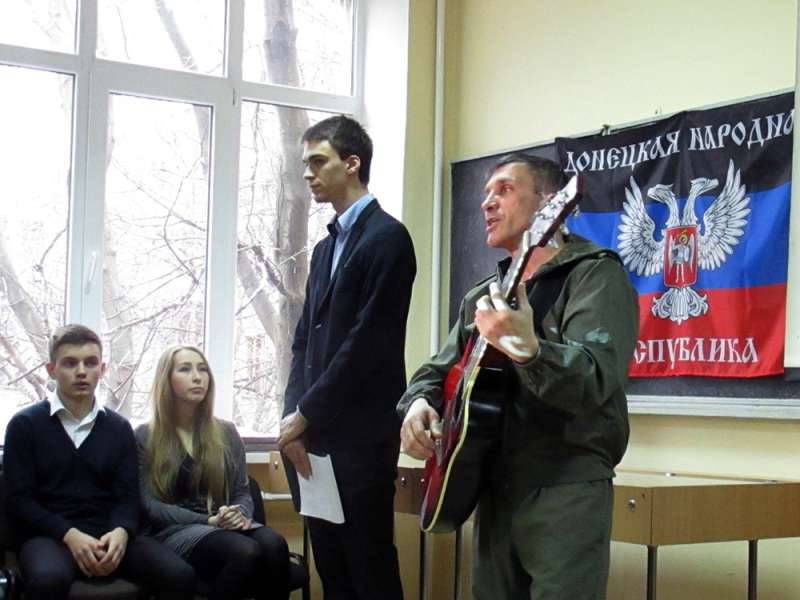 ... Hold on to your truth. Don't let go she
Will be waiting for you at sunset
A star burn over an ashen field.
Without akathist, without curses
Alone in the field - is free!

So he left the battlefield - free and with his truth, burning in the sky ...

Ctrl Enter
Noticed oshЫbku Highlight text and press. Ctrl + Enter
We are
Grigory Petrovsky - Bolshevik from the “Union of struggle”Descendant of Hetman Polubotka - Chief Gendarme of Russia
9 comments
Information
Dear reader, to leave comments on the publication, you must to register.