In the 30 of the last century, China experienced an extremely difficult period. After the Xinhua Revolution of 1911, the country fell apart into de facto independent, but officially unrecognized provincial states. One of these was Xinjiang in the northwest.

The local population was extremely variegated, with a traditionally large proportion of Muslims: both Turkic-speaking Uigurs (more than half of the inhabitants) and ethnic Chinese Dungans. In addition to the “simple” Chinese, there lived Manchus, Kirghiz, Sarts (Uzbeks), Russians from the remnants of the White Guard detachments, Tajiks ... In the field there was complete arbitrariness of both civilian authorities and army units. The province was a powder keg, insurrections regularly flashed from the XIX century.

In 1931, Xinjiang was overwhelmed by another wave of uprisings. Soviet experts gloomily stated: "The normal life of the country (assuming that such conditions existed in the conditions of western China) is fundamentally disturbed."

One of the rebel leaders was General Ma Zhongying, an expert and lover of partisan tactics. In battle, he tried to leave small parts from the front and cover the enemy’s flanks. If the maneuver did not succeed, a shock "fist" was going, beating in a weak spot. When that failed, Ma Zhongying retreated and waited for a better opportunity. Modern at that time tactic, when the reserves were kept in the rear, and not near the front line, in the fight against such an enemy led to great losses - the army was divided into parts.

The Chinese themselves called their troops suppliers. weapons the rebels. Soviet sources noted that the Chinese officer is primarily a great lover of trade and unclean. The only serious support of the government was the Russian White Guard units, which were distinguished, however, not only by their fighting efficiency, but also by their penchant for robbery. 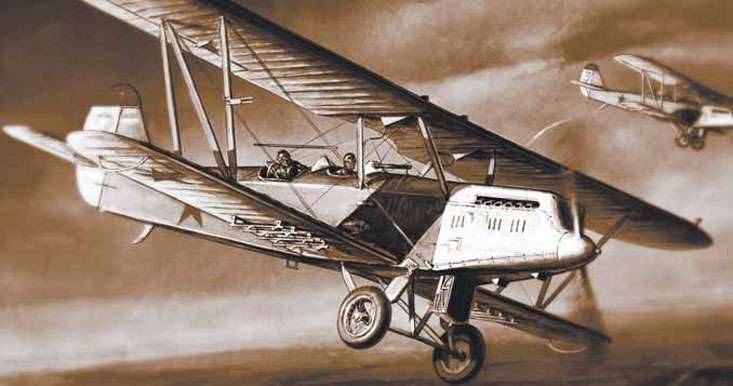 The Soviet Union, naturally, was worried about the aggravation of the situation in the immediate vicinity of its borders. Especially since it was reported on the penetration into the region of Japan and the UK. At the start of the 20, Soviet troops were already entering Xinjiang in pursuit of defeated White Guard units. But now it was necessary to work thinner.

Therefore, in Xinjiang, Altai men armed with P-5 type aircraft, BA-27 armored vehicles, mountain three-inches and HotNess 37-mm guns, Maxim and Degtyarev machine guns, and Dyakonov mortars appeared. There were even pack shortwave radio stations. Already on the set of weapons it is not difficult to guess that the Altaians were Soviet units. Of course, it was impossible to hide the characteristic appearance of the fighters and commanders, but since Russian immigrants lived in Xinjiang, the Altai’s membership in the USSR was not publicized - all the interested parties pretended that only local cadres were fighting. For example, Pavel Semenovich Rybalko, the future marshal of armored troops and twice Hero of the Soviet Union, was called the Russian general of the Chinese service, assistant commander of the Southern Front. Interestingly, the former White Guards, who served under Rybalko, knew him by real name.

In December 1933, the P-5 link was disassembled to the small Kazakh Ayaguz station, assembled, and the cars flew to Xinjiang. Mountain ranges up to four kilometers high were overcome without radio stations and oxygen equipment, in continuous clouds. Upon arrival at the destination, Soviet pilots were met by emigrants in uniform of the tsarist army. P-5 came in handy immediately - when reflecting the assault on the capital of the region - Urumqi. Having dropped to 250 meters, two aircraft took turns dropping 25-kilogram bombs into the crowd of rebels, and then fired from machine guns. Attackers, never seen before aviationare literally crazy.

Soviet instructors and units had a hard time. Only on the Southern Front, five groups fought: the Altai, the Russians, the Mongols, the Chinese, and the Sarts. In the Chinese army, mordicity and sticks were officially used, and the order did not save from punishment. Not even getting a meager ration, the soldiers and officers were starving. Reached fainting in the classroom. Desertion flourished. At night, the gate of the unit was closed so that the sentries did not run away.

However, by the spring of 1934, the situation was stabilized. The “clean work” of the Altais became the benchmark of quality. A gradual withdrawal of Soviet troops began, and weapons were transferred to the local army. But the problems remained.

In April 1937, in the south of Xinjiang, the Dungans and Uighurs, dissatisfied with the attitude of the government towards them, raised another rebellion. It threatened the only way to quickly transfer equipment to China to fight the Japanese. And again the USSR came to the rescue. This time we went to a distant land and Tanks.

With the strictest secrecy, a separate unit was allocated from the separate tank battalion of the Dzerzhinsky Special Motorized Rifle Division of the Special Purpose named after the Dzerzhinsky NKVD troops to participate in long-term exercises in the conditions of the mountain camp. The separate tank company included three platoons of five BT-7 tanks each with a short 76-mm gun, the same command tank and a reconnaissance platoon - five light T-38 amphibious guns. Total 21 machine, 78 man under the command of the commander of the 1 division, captain Ilya Khorkov. Personnel was carefully selected.

BT-7А at that time was distinguished by relatively powerful weapons and the ability for fast long marches. The company was reinforced by a sapper platoon, a mobile repair shop of type "A", and an AK-5 car radio station with a crew. Attached trucks were supposed to be used to transport personnel, property, food, fuel and ammunition.

1 August 1937, the company left the town of Reutov near Moscow by rail to the Kyrgyz city of Kant. Tankers dressed in “special order uniforms”: bathrobes and hats typical of a particular locality — there both civilians and armed groups wore the same. It was strictly forbidden to take any equipment with Soviet symbols on the hike. Tankists warned: not to tell about their actions in letters to their homeland and not to mention the names of settlements.

From Kant, the tanks marched to Rybachy, then to Naryn. Ahead lay the Pamirs. Experienced driver-drivers were able to overcome the mountains along the Turugart Pass and reach the plain without incident.

From the light hand of one British analyst, the BT series of tanks was called highway and aggressor tanks. Allegedly, they are unable to move anywhere except on West European freeways. However, the central part of Xinjiang, where BT had to fight, is occupied by Takla Makan, a desert with an abundance of salt marshes. Tanks and trucks moved relatively easily on a flat surface, but it was enough to dwell on salt marsh to get bogged down right away. So three tanks got stuck - the others noticed the danger in time and went ahead. Only two days later the crews were able to reach the hard ground and make gentle exits in the sand. The experience of Khorkov was useful, thanks to which the tankers took four five-meter logs per car with them. Relying on them, tanks at full throttle got out of the natural trap. Through one of the rivers had to be forwarded, the bridge was destroyed. Tanks flying out of the fountains of water to the shore, so impressed the locals that they first fell to the ground, and then hid.

The rebels, not taking an open battle with the Soviet units, settled in the walled cities of Maralbashi, Kashgar, Yarkand and Khotan. The height of the mud walls surrounding these settlements reached eight to ten meters with a thickness of five to six meters. However, tanks easily pierced wooden gates and the walls were not a serious obstacle. It remained only to capture the stunned defenders.

At the end of the business trip, tanks almost reached the border with India, where a huge caravan was captured - about 25 thousands of camels and donkeys loaded with precious stones, gold and silver products, and other valuables. The trophies were transferred to the USSR by airplanes - for their landing tanks specially rolled ground sites.

Tankmen was difficult to fight. Loss dust got into the cars and caused rapid wear of rubbing parts and mechanisms. Engine power with actuated cylinders, pistons and rings dropped sharply. Therefore, it was necessary to move with shallows: while one part of the tanks was fighting, the tracks of the disabled ones changed, the engines were cleaned of dust and dirt. But BT was able to pass over three thousand kilometers in the mountains and desert, having only one low-powered patrol from repair facilities.

The desert continued to make surprises. Fingers tracks worn so that took the form of a crankshaft. A spare was not enough. It was necessary to make caterpillars out of the still not completely worn out tracks, to put them on a part of the tanks, which were marching several tens of kilometers. Then the tracks were removed and brought back by truck for the next batch of tanks. Therefore, on the way back through the mountains, the tanks moved on wheels, despite the risk of falling into the abyss, as sometimes happened with trucks of cavalrymen. Helped the engineers, who expanded and improved the road.

The business trip ended on February 19 1938. Captain Khorkov and the junior military technician Shtakalov received the Order of the Red Star, and a few more tank crews - the medals "For Courage" and "For Military Merit." Later, many participants in secret campaigns in Xinjiang successfully fought on the fronts of the Great Patriotic War.

Ctrl Enter
Noticed oshЫbku Highlight text and press. Ctrl + Enter
We are
Nerchinsk agreement. The first world of Russia with ChinaLife of the Yenisei province of the late XIX - early XX century
34 comments
Information
Dear reader, to leave comments on the publication, you must to register.