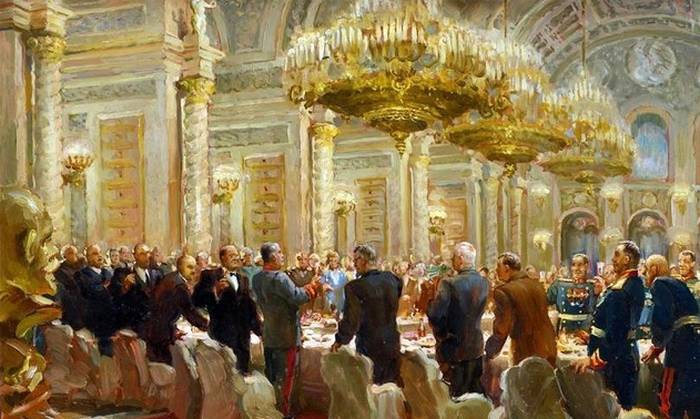 Nowadays, the names of the leaders of the Soviet era are increasingly heard at the highest level. They sound in a critical, then in an approving manner.

In one of his recent public speeches, the Russian president negatively assessed Lenin’s policy in creating the USSR. About Stalin really very bad today is not often remembered. The wave of violent hysteria that peaked a few years ago was somewhat subsiding. In our opinion, this expresses something more than just a change of mood in that liberal intellectual environment, which, in fact, gave rise to terry anti-Stalinism. Other, more weighty, fundamental factors are piling up that encourage both our society as a whole and the country's president, in particular, to increasingly turn to the experience of building the red empire and look for clues and answers to the pressing questions of today's Russia. Is it not from this series that there is a revival of the TRP and vocational schools, attempts to recreate quasi-pioneer and personnel reserve, which “decides everything”?

Who was Joseph Stalin for Russia and for himself? Who is he - a tyrant, a misanthrope, a mass murderer, how do all these Fedotovs and Svanidze paint him with foaming at the mouth? Or the great and still not fully comprehended savior and creator of the Russian state, from the phenomenal experience of which it is possible to draw the necessary decisions and revelations for centuries? The question is exactly that, edge. Otherwise, it cannot be put today, for, no matter how sounding the timpani in the Kremlin trumpeted, every sane person realizes that the neoliberal model imposed on Russia from the outside is bursting at the seams and pulling us to the bottom. It is clear that the inevitable collapse of this model is unacceptable neither to the ruling class, nor to the masses of the people, that it is necessary to change something, moreover - on a large scale, decisively and meaningfully, without waiting for it to reach the bottom. This is precisely the reason for the lively interest expressed and unspoken by Putin to the legacy of the patriarchs of the USSR.

But for a start, both Putin and all of us need to clearly distinguish between stages — Lenin and Stalin. Being for an inexperienced historian in the same ideological bundle, they, nevertheless, due to polar differences, are essentially diametrically opposed. If the Leninist-Trotsky regime tried to destroy the cultural and religious soil of traditional Russian statehood to its foundations - devastated temples, implanted frenzied satanic rebellion, turned every page into a glorious stories Russia, from Prince Vladimir to the last Romanov, a multi-ton roller of proletcult drove into the asphalt the names of the great Russian commanders, writers, thinkers and spiritual seekers, propagated throughout the country fornication and emergency, issued orders for the destruction of the clergy (and, the more, the better), the gradual rise in the communist hierarchy of Stalin was accompanied by a steady reversal in this policy along all lines.

It was Stalin who buried the Comintern, whose task was to incite the world fire of the proletarian revolution with the help of Russia as an expendable material. It was he who returned the honor and dignity to the slandered names of Alexander Nevsky and Pushkin, Suvorov and Ushakov. According to his will, the great Russian science was resurrected and strengthened, and the dignity of the officer class rose. A gigantic industrial breakthrough was completed, which laid the infrastructure for victory in the Great Patriotic War. On behalf of Stalin, it is impossible to tear off the victory of the Soviet people in the nuclear confrontation in the USA and the conquest of space. It is necessary to completely lose objectivity and honesty in order not to understand: the security of today's Russia is entirely built on that powerful foundation with a 10-multiple safety factor, which was laid in the era of Stalin. This also applies to the formal authority of our country in international politics.

But there is another, hidden, mysterious, metaphysical side of this person and this stage in the history of our Motherland. The side that is deliberately or unintentionally forgotten, as ardent haters, so sometimes sympathizing with the "great leader." It is all the more important that it is precisely in our days, when a wave of rabid Satanism and Westernism covered Russia weakened after the collapse of the USSR, this metaphysical mystery of Stalin begins to show more and more clearly to the surface, disturbing minds. In fact, as one person who did not have an academic education, he managed to grasp the immensity, defeat countless enemies within the country and around the world. He did not suffer, like Suvorov, a single serious defeat in both civilian and military areas. Here opinions differ. Some speak of the monstrous working capacity of Stalin, who did not know the weekend, slept six hours a day and read 300 typed pages a day. He kept in his mind thousands of names, owned encyclopedic knowledge in various fields. He knew and appreciated the Russian language brilliantly. At the same time, according to eyewitness accounts, he was unusually patient, polite and infinitely merciful to ordinary people. As for the leader’s iron hand, the bloody trail of repression, the red line passing through his entire fate, this blood for many spiritually enlightened people was not the blood of torture and shame, but the inevitable result of the surgical operation that God’s Providence after 1917 had performed over fallen troubled Russia. Stalin in this immensely complex, protracted and painful operation Stalin, as is becoming increasingly clear, served as a scalpel in the hands of God. Hence the word “steel” in his party pseudonym. Like a scalpel, Stalin burned, destroyed the cancer cells of Lenin's nihilism from the prostrate body of the country. Waves of repression rolled from Smolensk to Vladivostok, collided with each other, raising the bloody foam of denunciations and settling accounts ... In the course of this struggle, the Stalinists fought the Trotskyists to death, and using their dominant position in the NKVD, they reciprocated. A terrible great unrest in which it is impossible to do without a huge number of innocent victims.

But the question arises involuntarily: why did the patriarchs Sergius and Alexy, Metropolitan Nikolai (Yarushevich), Saint Luke, and hundreds more, if not thousands of devotees, praise and honor his name. Who was he really? Great overlord or, nevertheless, a warrior-monk who did not know rest and self-interest. Just myself, to the last second, who gave service to the Russian people. The answer is already very close, and it comes to the surface more and more clearly through the dirty ripples of idle speculation and the swamp of paid publications. May God find the saving hand of Stalin, reaching for him from the great epoch of victories and accomplishments in the sorrowful hour experienced by Russia!

Ctrl Enter
Noticed oshЫbku Highlight text and press. Ctrl + Enter
We are
About Stalin and KhrushchevThe value of Stalin for modern society. Round table
515 comments
Information
Dear reader, to leave comments on the publication, you must to register.