If the armed forces and military-industrial complexes of Ukraine and Belarus are among the largest in Europe (albeit, mainly due to its voluntary disarmament), then the four other neighboring countries of the former USSR still have completely insignificant air forces and zero defense.

Moldova, for example, did not help even the fact that it had to wage a war for Transnistria, and after all, conflicts almost always contribute to the intensification of the construction of the Armed Forces.

Over the Dniester nothing to do

The Moldavian army, already weak, is gradually falling into decay due to extremely insufficient funding. Help from Romania is limited due to the lack of resources on her own. In fact, it all ended with the delivery of the TAV-71 BTR, a certain amount of equipment and equipment. The rest of the weapons of the Armed Forces of Moldova equipment received from the Soviet army.

The Moldovan air force after the collapse of the USSR represented a significant force, having received the 34 fighter MiG-29. But one of these aircraft was shot down over Transnistria, more than 20 sold to Romania, Yemen and the United States. There are a maximum of nine cars in storage, and they are also supposed to be sold somewhere. Therefore, the Air Force consists only of transport and training aircraft and helicopters. This 1 Yak-40 (1 still stored), 1 Tu-134, 5 6-AN-2, 1 AN-26, 1 Yak-18, about 12 Polish PZL-104, 4 to Ni-8. The ground defense is carried out by the 1 regiment of the S-125 SAMs (12 PU).

Transnistrian armed forces, according to some estimates, have 18 tanks T-64 BV, more than 100 armored personnel carriers, over 70 guns and MLRS "Grad", a significant amount of means of anti-aircraft defense and air defense, 6 attack helicopters Mi-24. This means that the military potential of Moldova is completely insufficient to regain Transnistria by force. Rather, the armed forces of an unrecognized republic can capture at least part of Moldova. True, in this case, Romania will probably come to her aid, which will provoke a major regional conflict. However, while such a development of events seems unlikely. As the Moldovan army continues to gradually degrade, Chisinau will not dare to seize Transnistria by force. Kiev may support the intervention (perhaps it was under such an option that the fiery Russophobe Saakashvili was appointed governor of the Odessa region), but now Brussels, which is already very tired of the Ukrainian conflict, even in its current version, will not allow him to do so. Moreover, Tiraspol will not start a war first.

The current economic situation of Moldova looks frankly catastrophic with a tendency to worsen, so there are no prospects for the restoration of its Armed Forces. Much more likely is the complete political and economic collapse of the state and, accordingly, its army.

In contrast to Moldova, the Baltic countries have long been in NATO and the EU. But it did not bring them economic prosperity, much less military power.

Lithuanian naval forces include a Fluwefisken type Danish patrol 3, a former Norwegian Storm missile boat 1, used as a patrol (still 2 of the same type NN), 1 former Norwegian minelayer Vidar, 4 minesweeper, 2, 90, a former NMN XXNXX, 2, Norwegian mine sweeper, 1124 minesweeper, and 2008 XMNUMX. such as "Hunt" and German type "Lindau"). None of the ships have any rocket armament. At the beginning of the XNUMX, the country received from Russia the XNUMX IPC of the XNUMX project (they became the price paid for Lithuanians to build housing for officers in the Kaliningrad region), which were classified as frigates in the national Navy. Vilnius was going to sell them to Tbilisi, but after the August XNUMX war, NATO imposed a tacit, but extremely tough, embargo on any arms supplies to Georgia, so both ships scrapped. 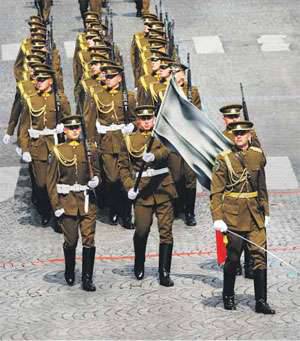 Latvian ground forces include one brigade, as well as a special forces detachment. Formally, the country is the only one of the Baltic, in whose army there are tanks. However, these are just three extremely obsolete T-55 used for training purposes, since they do not represent combat value. There are also two no less outdated BRDM-2 (apparently, they have already been written off) and eight American Cougar armored vehicles. It is expected to receive from the British Armed Forces 123 BRM series CVR (T) ("Spartan", "Simiter", etc.). Artillery includes X-NUMX Czech K-26 guns and 53 mortars - X-LUMX English L-68, Soviet M-24 16 and 26 Swedish M-43D Swedish.

There are Israeli Spike 12 ATGMs (this is the only weaponwhich can be called modern) and 2 Swedish RBS-56. The air defense system consists of 24 Swedish RBS-70 and 22 anti-aircraft L / 70 anti-aircraft missiles from the same place.

The Air Force has 4 multipurpose Mi-17, 1 Mi-2 (and approximately 6 in storage), 2 Italian A-109 (in the Border Guard). In addition, the Ank-10 “Kukuruzniki” An-2, the Czechoslovak transport aircraft L-1 and the Polish training PZL-410 are in non-flying state and are kept in a non-flying state.

The naval forces include 11 patrol boats: the 5 newest Skrunda catamarans of their own construction, the Astra 1, and the Swedish 5 type KVV-236. There are also former Norwegian Minzag-type "Vidar" and 5 minesweepers "Imanta" (Dutch "Alkmaar"). The Norwegian Storm type missile boat (without PKR) and the German minesweeper Lindau are used as training ones. Withdrawn from the Navy and still in the sludge still 3 RK "Storm" (also without PKR, used as a sentry) and 2 German trawler "Condor".

Estonian ground forces include the 1 and 2 infantry brigades.

The Navy is made up of X-NUMX ex-English Sandown minesweepers used as patrol ships.

Thus, the total potential of all three Baltic armies is insignificant without a chance to change the situation due to the lack of its own defense and equipment for the purchase of equipment. Even in the plans there are no tanks, MLRS, combat aircraft and helicopters, air defense systems at least medium range, boats with attack weapons, not to mention submarines and warships. From the point of view of waging a classic war, the Baltic Armed Forces can be simply neglected.

Regarding the deployment of NATO troops in these countries, the US is transferring a brigade group from Germany to Eastern Europe, which is armed with 90 tanks Abrams, 140 BMP Bradley, 20 SAU M109A6. If such a group were located in each of the Limits, it would be possible to talk about something, but it would be one not even for three countries, but for the whole of Eastern Europe. That is, very insignificant forces will "spread" from Estonia to Bulgaria. Naturally, this measure has no military significance and is not even a political, but a purely propaganda event. In Western Europe to protect limitrofov no resources, no desire. The United States has resources, but there is definitely no desire.

Ctrl Enter
Noticed oshЫbku Highlight text and press. Ctrl + Enter
We are
The state and prospects of development of the naval forces of Romania (2013)The Armed Forces of Moldova at the present stage
186 comments
Information
Dear reader, to leave comments on the publication, you must to register.