In a series of New Year holidays, the date is very modestly marked, significant not only for the air defense of the Ground Forces, but also for the country as a whole. Meanwhile, one of the founders of modern Aerospace Forces had an anniversary - a hundred years from the date of its formation. What events remember the last century? Lieutenant-General Alexander Leonov, the commander of the air defense forces of the Ground Forces, answered this and other questions to the Military-Industrial Courier.

-History The creation of military air defense began with experimental shots conducted at 1881 – 1890 at fixed air targets (snakes, balloons, balloons) and publications in this regard in the “Artillery Journal” of articles on the theory and practice of combating similar targets. The methods of preparing and firing at the airship and the balloon used by the enemy for raising observers and spotters of artillery fire were set out in the 1911 “Rules of Field Artillery Firing”. At the same time, the basic requirements for a special anti-aircraft gun and proposals for its combat use were developed.

In June, 1914 - February 1915, engineer F. Lender, with the participation of Captain V. Tarnovsky, designed and manufactured the first four 3-inch (76,2-mm) anti-aerostatic guns of the 1914 model of the year (later called anti-aircraft) in the workshops of the Putilov plant.

The management of the creation of a new kind of troops in the Red Army was entrusted to a single body - the Office of the Head of the formation of anti-aircraft batteries (UPRZAZENFOR), created in July of 1918. During the military reform of 1924 – 1925, new measures were taken to strengthen the air defense system. In ten years, the number of anti-aircraft guns in the rifle division increased from 12 to 18 units. All units and parts of anti-aircraft artillery were transferred to the subordination of the artillery commanders of the fronts (districts).

In the 30-ies, new models of armaments come with FOR, with which the military air defense system entered the Great Patriotic War:

In addition, by the beginning of the war were created:


For the first time, the official division of antiaircraft artillery by purpose into military and positional (later Air Defense Forces of the country) was recorded in the “Manual on Combat Use of Antiaircraft Artillery”, published in 1939 year.

The report of the General Directorate General of the Artillery Commander for submission to the 30 General Staff in May 1945 said: “The ground forces should have their own ground defense systems, which, independently of the Air Force and the Air Defense Forces, would be able to independently and permanently cover military force groups and military rear facilities”. It was emphasized: "Thus, the allocation of troops in the general air defense system in November 1941 of the air defense system is correct."

–In the post-war years, a breakthrough was made in the technical re-equipment of the troops. What does this experience mean?

When summing up the KSHU of the Belarusian Military District held in July 1957 by the USSR Minister of Defense Marshal of the Soviet Union Zhukov for the first time recognized the need to create a new kind of air defense force in the Northwest. By order of the USSR Minister of Defense No. 0069 of 16 of August 1958, the units, units and formations of military anti-aircraft artillery, providing its structures that were organizationally part of the Army, as well as a number of military schools and training centers were removed from the subordination of the commander of artillery and separated into a new independent type of army.

With the advent of reactive aviation In 1957-1959, the process of replacing medium and large caliber anti-aircraft artillery systems with anti-aircraft missile systems began. In the first period, these were S-75 air defense systems. However, being quite formidable weapons, they had an unacceptably low mobility by the standards of the air defense forces of the SV. In 1960 – 1975, the emergence of air-to-surface missiles, anti-radar and ballistic missiles required new approaches to the development of a weapon system. For its creation and formation, a decisive role was played by the decree of the Central Committee of the CPSU and the Council of Ministers on 1967 of the year “On urgent measures for the development and production of air defense systems of the Ground Forces of the Soviet Army”. 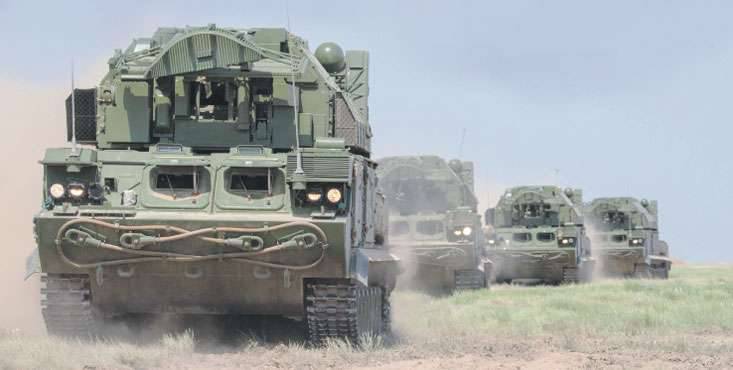 The “Krug” SAM system was the firstborn (1965, the general designer of the complex - academician V. Efremov, the general designer of the rocket - L. Lyulev). On the tracked high-range chassis, all combat vehicles were deployed: radar detection and targeting radar, target tracking and missile guidance radar, launchers with two missiles on each. The complex could be deployed in unprepared positions in five minutes. The distant border of the affected area was 50, and the altitude was from 3 to 24,5 kilometers.

To combat aviation at low and medium altitudes, the Kub air defense missile system was created (1967, General Designer - Y. Figurovsky, missiles - A. Lyapin, semi-active radar homing head - I. Akopyan). The complex had two main combat units: a self-propelled reconnaissance and guidance unit and a launcher with three homing solid-propellant anti-aircraft missiles on each. The combination of radar detection, guidance and illumination on one chassis was carried out for the first time in world practice. On the basis of the short-range air defense system "Cub" (17, later - 23-25 ​​km), anti-aircraft missile regiments began to form in 1967 tank divisions.

And to protect the motorized rifle, the Osa short-range air defense missile system (1971, the general designer of the complex, V. Yefremov, missiles, P. Grushin) was created, in which all the combat elements were placed on the basis of a floating high-speed self-propelled wheel. This made it possible to protect the covered troops while they were directly in their combat formations and to fight off air attack weapons at ranges up to 10 kilometers and altitudes from 10 – 15 meters to 6 kilometers.

–What did military air defense needed over time long-range weapons?

–In 1975 – 1985 with the advent of new types of EAS (cruise, tactical and operational-tactical ballistic, aircraft ballistic missiles, unmanned aerial vehicles of the first generation, upgraded UR type “Maverick”, “Hellfire”, PI “Harm” extended range and accuracy a) the modernization potential of the weapons and military equipment of the air defense forces has exhausted itself.

Long-range missiles C-300В (1988, general designer of the system - V. Efremov, anti-aircraft guided missiles - L. Lyulev) were initially developed as a means of anti-missile defense in theaters. But it was additionally entrusted with the functions of dealing with particularly important aerodynamic VIP targets — air command posts, AWACS airplanes such as Avaks, target designators of reconnaissance and attack systems, jammers at extreme ranges, manned by tactical aircraft and cruise missiles.

The short-range “Tor” air defense system (1986, general designer - V. Efremov, missiles - P. Grushin) was developed as the main means of fighting the WTO, for which purpose radar was used for its reconnaissance with a directional insensitive approach to the angles of the approach approach, and tracking radar with low-element phased antenna array. The “Thor” air defense system still has no analogues in the world and in fact remains the only means of ensuring the fight against the WTO over the battlefield.

The Tungusk short-range missile defense missile system (1982, general designer — A. Shipunov, chief designers of a cannon-gun and missiles — V. Gryazev, V. Kuznetsov) was developed to combat tactical and army aircraft directly above the front edge, as well as to attack helicopters with fire support type "Apache". The complex also has no analogues except for the domestic ZRPK of the new generation “Pantsir-C1”, created on the basis of the technical solutions of “Tunguska”.

MANPADS "Igla-1", "Needle" (1981, general designer - S. Invincible) was created to directly cover the troops and objects from the attacking means of air attack. To ensure effective destruction in it, for the first time in world practice, a scheme was used to shift the missile guidance point to the most dangerous area of ​​the aircraft’s center section, undermining, together with the warhead, the remnants of mixed fuel of the cruise missile engine, the submerged undermining of the total combat equipment.

- It turns out that almost all military air defense weapons have no analogues. And what distinguishes modern and future IWT systems?

–At present, the air defense units of the military districts are armed with long-range ground-to-air missiles C-300В, ensuring the defeat of aerodynamic air targets at a distance of up to 100 kilometers. She was replaced with the 2014 of the year began to come the system C-300В4, able to deal with all types of existing EAS at increased ranges. The possibility of hitting air targets, reliability and noise immunity are improved by 1,5 – 2,5 times. The areas covered by ballistic missiles are increased by the same amount, and the time to prepare for launch is reduced.

Modern modification of the complex, Buk-М2, continues to be delivered to the troops. By increasing the previous number of combat vehicles fourfold (from 6 to 24), the number of air targets simultaneously fired at the same time increased, the possibility of hitting tactical missiles with a launch range of up to 150 – 200 kilometers was provided. The peculiarity is the placement of means of reconnaissance, guidance and launch of missiles at the SOU. This gives the maximum secrecy of combat use and survivability in the composition of the battalion, the minimum deployment time (coagulation), as well as the ability to perform a single combat mission self-contained combat mission.

In 2016, the ground forces are planning to deliver the first brigade set of medium-range air defense missile systems Buk-M3.

From 2011-th comes a new modification of the complex "Thor" - "Tor-M2U". It allows reconnaissance in movement across any terrain and simultaneous shelling of four air targets, ensuring all-round defeat. The processes of combat work are fully automated. From 2016, the “Tor-М2” complex will also begin to arrive in the army, which, compared to previous modifications, has improved characteristics in 1,5 – 2.

As you correctly noted, the Russian Federation is one of the few countries that have the opportunity to independently develop and produce MANPADS. Maximum secrecy, low response time, high accuracy, ease of training and use create a serious problem for the air enemy. From 2014, the modern Verba anti-aircraft missile systems, which are highly efficient in conditions of powerful, organized optical interference, began to come in to equip air defense units of the Ground Forces and Airborne Forces.

The C-300В4, Buk-М3 and Tor-М2 air defense missiles are included in the list of priority weapons and military equipment that determine the appearance of promising systems. In general, during the 2011 – 2015 years, two newly formed anti-aircraft missile brigades and air defense units of eight combined-arms formations were equipped with modern armament in the air defense forces of the Ground Forces. Staffing them - more than 35 percent.

- Alexander Petrovich, what are the prospects for the development of air defense forces of the SV?

the improvement of the organizational and staff structures of the military administration bodies, formations, military units and subunits in order to maximize the combat capabilities of the incoming and developed anti-aircraft missiles;
the development of a new generation of weapons and military equipment capable of effectively fighting all types of EAS, including those created on the basis of hypersonic technologies;
improving the system of training highly qualified personnel, including junior specialists, trained in specialized training centers of the air defense forces of the Armed Forces.


As for priorities, this is the improvement of the development management system and the training of troops, the formation of a unified military-technical policy, the completion of the ongoing development work in the planned timeframes, the creation of a design and production reserve. Let me remind you of the words of Georgy Konstantinovich Zhukov, which have not lost their relevance even now: “Reliable air defense, capable of repelling enemy strikes, especially in the initial period of the war, creates favorable conditions for the entry of the Armed Forces into the war. A grave grief awaits a country that will not be able to repel an air strike. ”