The approach to geopolitics from an irrational point of view, from an apocalyptic standpoint, seems comparable to the situation in Russia at the beginning of the 20th century, when the highest part of the elite was captured by mystical ideas, made belated, illogical decisions, completely divorced from reality. For which she paid: with the country and with her own lives.

The fate of Turkey is “predetermined” by numerous guardians of irrationalistic and religious-mystical approaches to geopolitics. If we summarize all the attitudes and ideas, then the future of this country is deplorable. It will be drawn into a chain of regional conflicts, a civil war will break out, foreign intervention will occur, up to a third of the residents will become refugees, a significant part will perish. The country will be divided, and Constantinople will depart the “right” people.

Of course, there are objective and subjective prerequisites for the crisis and decline of our southern Black Sea neighbor. Firstly, these are refugees, for whose maintenance Turkey receives a kind of tribute from Europe. A critical increase in their numbers will create enormous pressures on infrastructure and budget, even if we do not take into account the facts when radical extremists penetrate the country in the guise of refugees. In addition, this tribute is a kind of narcotic, a sharp cessation of supplying them with them will significantly aggravate the situation.

“Erdogan the loser is a good target for prosecution. And here Europe will remember him ties with Islamists ”
Secondly, it is the rupture of economic ties, the reduction of the tourism and manufacturing industries. And not only because of the Russian sanctions. They do not play the first role, but can be the last straw that broke the camel’s back.

Third, rising unemployment, declining investment attractiveness amid the economic downturn and political instability. The internal problems of the country, starting with the notorious “middle income trap”, began to escalate long before the conflict with Russia. The confidence of foreign investors undermines the interest rate policy of the Turkish Central Bank, as well as the transition to a presidential form of government.

Fourth, the national and first of all the Kurdish factor. This ethnos is at the stage of statehood formation, it claims to a significant part of the Turkish lands. An economic crisis or geopolitical defeat could push the country to collapse.

Among the subjective reasons, we must attribute the voluntarist, revenge-seeming policy of the government and Erdogan with signs of nationalism. The latter is increasingly giving the impression of a “hot guy,” ready to aggravate the conflict for fear of losing face. Erdogan's logic reminds of the street Gopnik of the 90-x sample. First, the smallest and thinnest member of the gang is sent to the victim, whose task is to provoke a response. And then the whole gop company "brings justice", knocking out valuable things, money, and even life from a person. 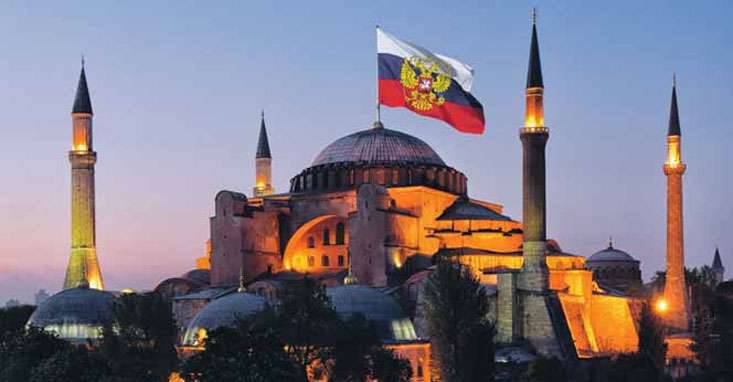 As long as the Turkish leader feels for himself the support of Europe, overturned by tribute and abiding from refugees and terrorist acts, while his generals quietly enter NATO offices, he considers himself safe protected. So, they are ready not only to dictate their will, arrange minor provocations and stir up hysteria, but also decide to invade Syria under the pretext of creating a “security zone”, blocking the straits and strikes against the Russian contingent.

The subjective factor, growing appetites, the inability to stop or admit that they were wrong will push Erdogan to complicate the situation, to involve new forces in the confrontation. He is largely a hostage of the initial position, which he cannot retreat from, since this is the end of his political career and the charge of collaboration with the IS prohibited in Russia. While they can not be the basis of pressure on Turkey. But Erdogan the loser is a good target for prosecution. And here Europe will remember his connection with the Islamists.

Russia has no right to be like its Black Sea neighbor in its irrational and irresponsible policy, built on an ideology turned to the past. The Turkish propaganda machine is just waiting to mobilize the population in support of the military-political regime of Erdogan, finally suppress freedom of journalism, destroy any sane opposition, get the desired image of the pan-Slavist aggressor, as we are already defined, for example, in the Turkish Yenicag (Agay Ogtai Guner - “Where is Russia going?”).

Our country must remain a friend to the peoples of Turkey. Regardless of the local regime. This is the only constructive position.

The presence of an ideology, a mission, an idea that is presented to the rest of the world as a justification of the right to power is a vital necessity for the state.

It is only recently that the Russian political community, which had been in the captivity of applied manipulative technologies for many years, began to realize that the "illusory reality" is able to work only for a limited time. Even the best public opinion management practices fail when addressing large-scale historical calls. Ideology turns out to be necessary.

But instead of developing in this direction, we get ideas of sample XVII, at best, of the end of the XIX century from napkins chests. Take the same Tsargrad, which should belong to "who knows", than the soldiers in the 1914 – 1915 have already tried to make the masses.

Such a "mystical" approach is a potential basis for a global conflict and internal civil war already in Russia, and without thinking about the capture of Constantinople and the straits. Today there are enough authors calling for such a man-made apocalypse. “In ancient times, no self-respecting commander dared to take a step before the soothsayers, fortune-tellers or magicians around him promised the favor of heaven,” Roman Ilyushchenko preaches (“Erdogan is not Tamerlane. The Elders predicted the disintegration of Turkey”). But this does not mean that in our time, when formulating geopolitical strategies, we must be guided by astrological forecasts.

Surely Tamerlane was led not only by dreams. There is quite a historical version that it was precisely during the stay at Yelets that he consciously made the decision not to go to war with Russia with its population ravaged by previous Horde raids, and peaceful relations with the potential opponents of the Horde were more in line with its strategic goal. The enemy of your enemy can become a friend. In turn, in the fall of 1395, Moscow troops seized many cities of the Volga region, taking advantage of the defeat of the Horde from Tamerlane.

No less dangerous is the expectation of the “end of time”, Armageddon. It is obvious that almost all modern eschatological and having an irrational-metaphysical basis of ideas echo the provisions and attitudes of the IG prohibited in Russia, and this is a “justice deficit” and the expectation of the Doomsday.

There is no difference, whose authority covers the suffering cohort of the apocalypse of the cohort of authors - Cosmas Aetoli, Paisius Svyatogorts, Arseny Kappadokii, or the Vanga Orthodox Church that is not recognized. It is possible to answer only with the phrase: “No one knows about the day or hour, neither the Angels of heaven, nor the Son, but only the Father” (“Mark's Gospel” .13: 32).

As for Constantinople, it is necessary to “reduce the importance” of the problem, and then the desired will be achieved not at such a heavy and bloody price. Recall that the slogans in relation to Constantinople and the straits served as one of the moral rationales for Russia's participation in the First World War, into which it entered unprepared. Results we remember.

Our political system is currently facing a stadial challenge that determines not only the directions and guidelines for development, but also the very fact of its existence.

On the one hand, there are objective socio-economic difficulties caused by internal causes and ineffective management, flawed and failed decisions. On the other hand, frank and overt external pressure, sanctions, intensification of geopolitical competition. But this is not a reason to pack your bags, dig bunkers, buy canned meat boxes. Or with a hot head rush into the pool of eschatological, revolutionary passions.

There will be no apocalypse, doomsday or “the end of time”, as has not happened in previous epochs. The chain of cataclysms, social and military-political conflicts will lead to the transformation of the way of life of most states, to the violent, unfortunately, resolution of contradictions with the subsequent awareness of the need to negotiate and formulate the rules of coexistence on planet Earth.

Attempts to primitivize international relations, reducing them to conspiracy theories, dividing the parties into blacks and whites, labeling and religious and mystical substantiation of Russia's position are a “tunnel” vision of problems, a loss of initiative. And as a result of the inevitable defeat of such an attitude towards geopolitics, we will receive a cohort of ashes of “prophets” sprinkling over our heads, admonishing us that the Lord punished us for our sins.

It is better to follow the well-known commandment: “He said to them: it is not your business to know the times or dates that the Father put in His power” (“Acts of the Apostles”, 1: 7). And to give the clergy to save souls, historians delve into the past, and politicians and the military to defend their interests from Caesar.

Ctrl Enter
Noticed oshЫbku Highlight text and press. Ctrl + Enter
We are
About Stalin and KhrushchevMilitary reform as an integral part of the security concept of the Russian Federation: Systematic dynamic assessment
50 comments
Information
Dear reader, to leave comments on the publication, you must to register.