February 17 2016
4
There is no need to once again represent the confectionary factory "Old Tula". Perhaps, there is no person in our country who has not tasted her famous gingerbread at least once. I really like to be in the museum of this factory - a small house where more than a century old is concentrated. история delicacies. There are in this story and heroic pages of the Great Patriotic War. However, in the museum itself guides tell little about this period. But I had the good fortune to communicate with a man whose mother, Lyudmila Papin, had been working in a factory since 1941. Her story will mostly be based on the story. 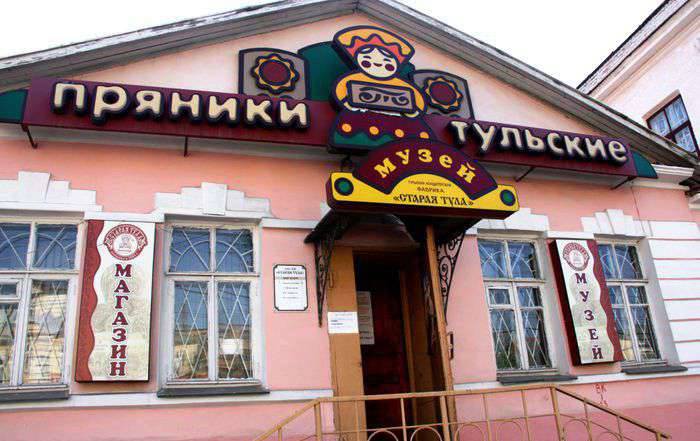 In general, “Old Tula” was “born” at the end of the nineteenth century, and more than one hundred and fifty people worked there. Vasiliy Yevlampievich Serikov was the owner of the factory in those years - that's why the first name was “Serikov and K”, and here, as now, they released not only gingerbread but also caramel and marmalade. Vasily Evlampievich was a kind and excellent owner. From year to year the assortment of sweets grew, some gingerbread - more than a hundred varieties. But we are talking about printed cakes, which need special boards. There were not enough working hands, many children came to the aid of many adults: for example, they wrapped caramel at home. They were paid for with delicacy - they gave out more for wrapping. At that time, caramel was not available to everyone, so the kids were very pleased.

In 1919, Vasily Evlampievich died. And in 1921, on the basis of the factory, they created a large confectionery association, which also included small confectionery establishments. The name has changed - now it sounded like Artel “Labor of the Disabled”. War invalids were meant - among the workers there were more than forty percent. Gingerbread and caramel became cheaper - they stopped adding expensive components - such as brandy. In 1936, the artel produced almost two thousand tons of gingerbread daily, most of which were sent to other cities. Production slowly grew and expanded. And then the Great Patriotic War began.

In October, the bloody battles of 1941 took place, the headquarters of the 472 regiment of the 154 th rifle division was located on the factory grounds. These days and up to December 18, when the fascists were driven out, the gang was not working. However, none of the women who worked in it, did not sit at home. Lyudmila Anatolyevna recalled that all the concerns at that time were about one thing: to help our soldiers. Every day women came to the factory, that is, now to the headquarters. They washed and repaired underwear for fighters, brought simple food, warm clothes. Lyudmila Anatolyevna grew two daughters and had practically blind mother-in-law in her arms — there was no need to wait for domestic and household help, her husband died in the first days of the war. But Daddy's orphaned family collected all their reserves - peas, cereals, vegetables, honestly divided in half what could be stored for a long time, and half carried to headquarters. True, the fighters did not take the precious gift, ordered to carry it back, assuring that they were fed well already. And in return they asked for cloth for the sisters. Winter came, it was necessary to warm themselves. And no one knew in what areas will have to fight. In the same way as food stocks, Lyudmila Anatolyevna divided sheets, pillowcases, towels in half, she did not regret the thin children's woolen blankets (although thick, but this is nothing). She gave her favorite linen tablecloth, because the fighters needed natural fabrics. It turned out thirty-two pairs of sisters. In gratitude, the fighters also gave the Daddy family a gift - a harmonica.

But then, finally, they drove the fascists away from Tula. And from December 18, the 1941 of the year began in the factory rebuilding. Large repairs demanded almost all the shops. But as soon as they started it, an order came: to make 5000 gingerbread for the soldiers of the Red Army by the New Year. I had to work for days. Lyudmila Anatolyevna (before the war she worked on cooking the filling, and now on making the dough, because there were not enough products for the filling, and her position was called “gingerbread”) until the evening she was working on making gingerbread. At night, construction teams, assembled from volunteers, took over: the working people of the factory took turns on duty to restore the workshops. These duties were obtained approximately in a night, but many worked for two nights in a row and only the third were spent at home.

Moreover, having completed the order for our fighters, at the general meeting of the artel workers decided to make a batch of gingerbread for the starving Leningraders. Cut out a special molded board “To heroic Leningraders from Tula”. What was the number of the party, Lyudmila Anatolevna does not remember exactly. He knows only that at least two thousand pieces. And they were made, as they said then, during the third shift. The first is the usual. The second - night, given to the construction and repair. This second ended at six o'clock in the morning, and until eight the artel slept. It was during these two hours that gingerbread for the Leningraders began to bake. Lyudmila Anatolyevna remembered the following fact: at first they decided to make the party, taking into account food supplies. Least of all was available sugar and flour. And then the artel women brought these products from home - they gave up all their supplies, did not leave anything to themselves. The party came out much more.

By the way, there is such a carrot in the Museum of the History of Leningrad. Someone from the blockade saved him ...

Repair finished in two months. The waffle oven was dismantled, the equipment for making noodles from peckled flour was installed. Now in the ovens, where they used to make pastries, dried vegetables and greens. Drying is also not for itself - for the front. And they grew it not only on their own vegetable gardens, but also on the plot that workers began to cultivate in the spring of 1942 of the year. This section was called the frontline.

The production of gingerbread has been greatly reduced - there was no more sugar, household supplies are all given to the citizens of Leningrad. Therefore, in 1943, most of the noodles and dried vegetables and acorns were released. According to the recollections of Lyudmila Anatolyevna, they made flour from acorns and made a drink resembling coffee. Dried and shredded acorns were also sent to the front. And on each parcel, on its side or on the bottom (with paper it was bad), they wrote a recipe for making this coffee. Once a letter came to the gang. Some of his lines Lyudmila Anatolyevna remembered by heart: “Dear Tula! We received your package and were very happy. Of course, you did not know that your gift will fall to the fighters who settled in your 1941 fall. And he got! How happy we were to hear from you, dear women! Drink your coffee and bring our Victory closer! Fighters 154 th Infantry Division ... "

Gingerbread production was adjusted at the factory only after the war ...

Ctrl Enter
Noticed oshЫbku Highlight text and press. Ctrl + Enter
We are
Father toldStalin and the wind of history
4 comments
Information
Dear reader, to leave comments on the publication, you must to register.