Who will replace Angela Merkel? 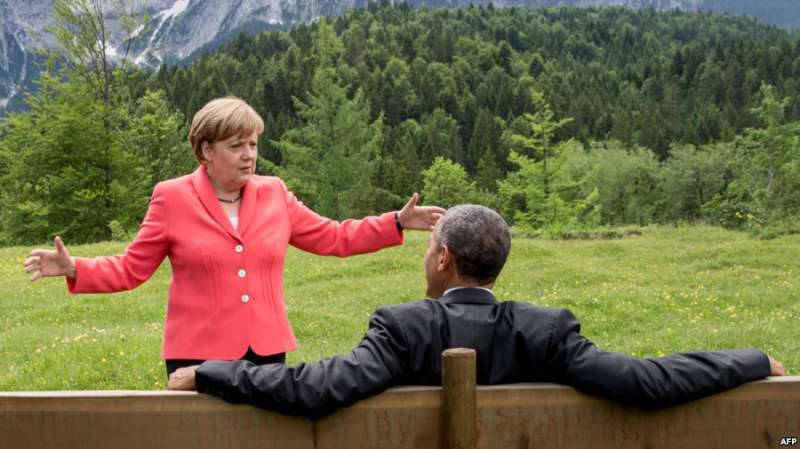 German rulers are often lucky with the moments. Even the incomparable genius of Bismarck would not be enough to unite Germany, if by that time there were no appropriate conditions in the “European concert” (general fatigue from France, French-Austrian differences and Moscow’s desire to avenge Vienna for treason in the Crimean War) Hitler could never reconsider the conditions of Versailles if England and even France were not interested in defeating the USSR with the hands of a restored Germany. And now it seemed generous история again presented to the Germans a historical moment that could allow them to review the status quo in the EU (within which France played the role of political leader and Germany - economic) and become an absolute, dominant force within the European Union. The Crimean events that struck the Russian-German axis became an unpleasant moment for Angela Merkel, but the chancellor eventually managed to turn the situation in her favor. It used the general weakening of France and actually led the anti-Russian forces in the EU, and then slowly pushed Paris aside from other political issues (for example, Greek).

However, having lifted the leadership in the EU, abandoned by the French, from the floor, Germany could not justify high confidence. The problem is that leadership implies not only the current management of the system, but also the development of a strategy for its modernization and modification. Merkel, on the other hand, was not able to perform the function of a helmsman, resulting in failure or, at a minimum, failure to solve the main problems facing the EU. 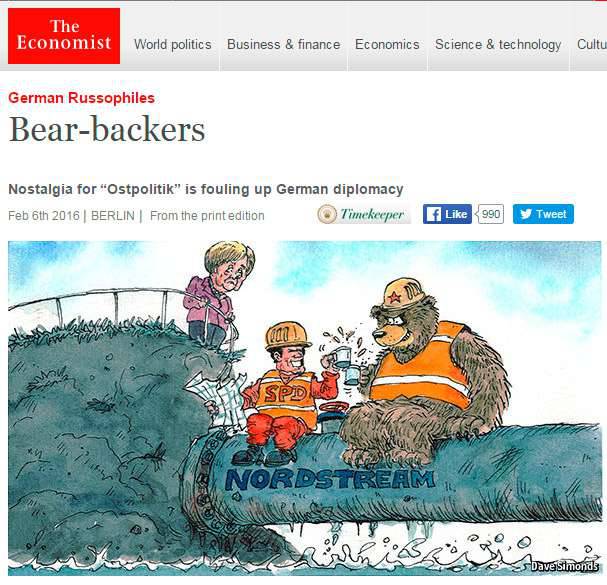 In the Russian direction, Angela Merkel did not just break the wood - she questioned many of the achievements of her predecessors. As the British Economist rightly points out, one of the key moments of the previous German policy towards the USSR / Russia (the so-called Ostpolitik, Eastern policy) was the principle “to change through rapprochement”. And more recently, through this rapprochement, the European Union as a whole, and Germany in particular, could have achieved a lot from Russia - from support in the fight against the United States for equality and to modification of the Russian government through the growth of the middle class and its demands. Having refused from rapprochement and constructive dialogue, Merkel decided to replace this principle with “change through pressure”.

As expected, the result was unimportant - the hopes of Western politicians to force Putin to give up the Crimea and Donbass to Ukraine, and Ukraine to the West did not materialize. Moscow has stood, and now nods meaningfully at the current mess in Kiev, suggesting to the European Union to recognize Western mistakes in Ukraine. It seemed that in this situation Berlin needed to begin the process of normalizing relations with Moscow, but Merkel hesitates. She does not want to go against the interests of the United States, upset Poland and the Baltic states and provoke some kind of political crisis within the EU. Well, and besides, she probably refuses to recognize the status of a full-fledged European power for Russia, with its sphere of influence and interests in the matter of the collective security of Europe.

The only problem is that a “vacuum of participation” exists, and if Merkel does not fill it, then others will take advantage of it. Among potential candidates, for example, its allies in the ruling coalition are the Social Democratic Party of Germany. “The spirit of Ostpolitik lives in 10 minutes by taxi from the office of Merkel - in the German Foreign Ministry, led by social democrat Frank-Walter Steinmeier. It is the Social Democrats who are behind the project to create a second pipe through the Baltic - Nord Stream-2. This project was officially announced by the German Minister of Economy Zigmar Gabriel - the leader of the Social Democrats, ”writes The Economist. The editorial board seriously feared that the Social Democrats would ignore the interests of Eastern Europe for the sake of establishing constructive relations with Russia. However, in order to play the main violin in foreign and domestic politics, Steinmeier and Gabriel need to win the election.

Another candidate is France, which is trying to become a bridge between the EU and Russia. If the current President Francois Hollande was in the place of Nicolas Sarkozy’s caliber leader, the process would have gone much faster and Paris would have been able to beat Berlin. In the meantime, the process of Russian-French rapprochement is rather sluggish, and Merkel still has time to work on the bugs.

Another problem that Merkel could not solve was the choice of the vector of EU development. The Germans have not yet decided on how to take the organization out of a systemic crisis. Actually, there are not so many options. First, pushing the idea of ​​further centralization (opposed by a number of elites, as well as a significant part of the EU population, for which integration is already associated not with benefits, but with European bureaucrats far from the interests of the people and collective responsibility for other people's mistakes) Secondly, the concept of “Europe of different speeds”, within which several levels of integration are formed. Experts from Eastern European countries (which, for understandable reasons, will not be included in the list of “speedy” countries in terms of integration) claim that this approach will ruin the EU, but their fears are somewhat exaggerated. Rather, this approach may correct the strategic mistake that the EU made when it accepted into its ranks politically, economically, socially and culturally not ready for European integration Eastern European states. And finally, you can just run up to the British scenario - turn the EU into a kind of forum and return the powers from the central bodies of the European Union to the national governments. You just need to choose one of these options. 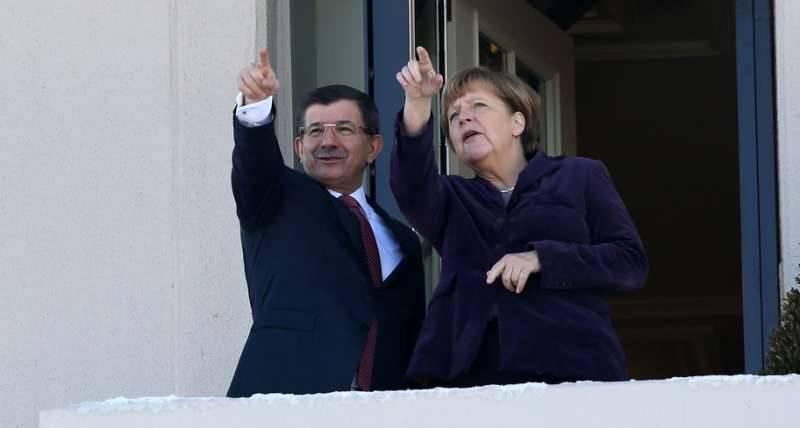 In addition, Berlin could not offer an acceptable solution to the problem of migration. Merkel's idea of ​​welcoming migrants (of whom another million are expected this year) does not inspire anyone. Hungary, Poland, the Czech Republic and Slovakia declared their readiness to block the so-called Balkan route - that is, to close the borders in order to avoid the flow of migrants to their countries. Even the French refused to support - Prime Minister of the Fifth Republic Manuel Weiss said his country would accept the agreed 30 thousands of refugees, but no more. 18-19 February 2016 will be held at the Euro Summit, where EU subordinates will want to hear from the German boss a real plan of action on the issue of migration. This topic will also be of interest to ordinary Germans - 81% of the German population does not agree with Berlin’s current problem-solving line. There seems to be no real plan. In the best traditions of the Roman Caesars, the German Chancellor prefers to buy off the “barbarians” in the person of Turkey instead of solving the problem. And the Turks, in the best traditions of the German barbarians, begin to tear up the price of their services - the initial 3 billion euros first turned into 5, and now they talk about 10 billions. Apparently, the political support of the Turkish position in Syria (for example, Merkel spoke in favor of Ankara’s proposal to create a no-fly zone in the north of the Syrian Arab Republic) is being added. Many in the EU (especially Italy) do not agree with such plans, and are not going to pay tribute to the Turks.

Merkel's mistakes have already led to a drop in her rating from extremely high 70-80 percent to more than 40 (of course, not the final figure, but the dynamics is important here). March 13 will hold land elections in Baden-Württemberg, Rhineland-Palatinate and Saxony-Anhalt, and their results will be perceived as a kind of barometer of the relationship. Not only to Merkel, but also to the new national party “Alternative for Germany”. The elections will show how tired the population is of political correctness promoted by Merkel (including migrants), and how ready it is to overcome the psychological trauma of World War II and support the right forces. For some questions, ADG will pick up from 7 to 15% of votes.

Now in the Western political and academic environment there is a very serious discussion on how Merkel, Germany and the European Union to get out of this situation with leadership. How to return sobriety and pragmatism to European politics? After all, Merkel’s departure from the post of Chancellor and Germany as the EU leader will not, in fact, solve anything - the European Union as an organization now needs not democracy, but a firm hand that initiates and conducts serious structural reforms. Some politicians (for example, former German Chancellor Gerhard Schroeder) speak of the need to return to the Franco-German axis, within which Paris and Berlin will balance each other. The problem is that this return is possible, however, only after the presidential election in France in April 2017, and even then only if a politician with at least some leadership qualities comes to the place of Hollande. And the European Union cannot wait for serious decisions for another year - they are needed here and now. Therefore, the reality is this: either Merkel will find the strength to play the role of leader, or the EU will have a very, very, very difficult year. Perhaps in some moments even fatal.

Ctrl Enter
Noticed oshЫbku Highlight text and press. Ctrl + Enter
We are
Rockefeller and Rothschild "Big Game" - in the light and in the shadowValentin Falin: West and Russia in the XX century: connection of times
49 comments
Information
Dear reader, to leave comments on the publication, you must to register.