Are patriots bred correctly in Russia? 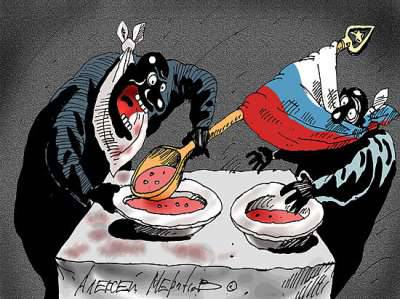 To begin with, just a few words on an abstract topic. After reading a few opinions about the previous material, I want to say that I have been doing this very military-sporting and patriotic work since 2005. Good or bad - another question. But the fact that the inside of all this seems to be a good idea, in this there is no doubt. There is no doubt that this business is still necessary, and especially in recent times. Therefore, with my comrades I will continue to suffer this matter. Suddenly, something good will come out, or you'll have to sit less in a frying pan.


This is for foreplay. Just the topic studied, and pretty good. But - let's go on the topic.

At the end of last year, together with everyone in the subject, I joyfully welcomed the adoption of the patriotic education program for the 2016-2020 years. I was also happy about the appearance of Roskommolodezhi, which, in our general opinion, was supposed to become something like pioneers and a Komsomol together.

However, the farther, for some reason, it became sadder. I will leave local and parochial affairs for later, and I will begin with the document itself.

Tell me: how many people have read, and even thoughtfully, this program? I learned. And very, very carefully. And, since the document is huge, with a bunch of numbers, in order not to burden those who read with words, I did something like a sample. The squeeze of water, always present in such documents.

From the second part it can be understood that since 2001, thanks to state programs, a system of patriotic education has been created. And the main goal is to further improve the work in this direction. In short, water.

But the goals and objectives of the program let me give the whole. According to the text of the document.

Iii. The purpose and objectives of the program

The main goal of the Program is to further improve the system of patriotic education, bringing it in line with new historical the realities of the functioning of patriotism in Russian society.

To achieve this goal it is necessary to solve the following tasks:

continue to improve the system of patriotic education, taking into account the scientific development of modern innovative technologies and mechanisms of education of patriotism in modern conditions;

to improve the regulatory, organizational, methodological and informational support of the functioning of the system of patriotic education;

develop and improve the system of military-patriotic education of citizens, develop promising forms and methods to increase the prestige of the military and law enforcement services;

develop the material and technical base of patriotic education in educational, labor, creative, military and service collectives and public associations;

increase the contribution (role) of cultural and mass media in the patriotic education of citizens.

The solution of these tasks is supposed to be carried out through the implementation of program activities according to annex No. 1 (events are determined by the federal executive bodies, institutions, organizations and executive bodies of the constituent entities of the Russian Federation).

Applaud? Definitely. Everything seems to be written clearly and without unnecessary letters. Correct and logical. The only exception is this application number 1, but about it a little later.

Further the interesting begins. The main directions of the program. I stress boldly that the Program takes into account the already established structure of patriotic education.

1 section. Scientific-theoretical and methodological base of patriotic education, taking into account innovative technologies and mechanisms of patriotism education in modern conditions.

This direction involves the continuation of research in the field of patriotic education and the use of their results in practical activities, the development of teaching aids, recommendations, training and special programs and methods of developing innovative forms and methods of patriotic work with young people.

Also, by the way, I was pleased with the need for a scientific substantiation for the education of patriotism.

If in general, the item 1 - empty talk, devoted to theoretical research, development and justification. But sorry, we already have a system! How so?

And so. In the end it will be clear when we turn to finance.

2. The interaction of public authorities and civil society in the interests of patriotic education.

Everything is clear here. Also not containing anything, even mineral salts, distilled water. Development, development, improvement of forms, the adoption of best practices and so on.

3 section. Formation of a patriotic worldview through the development of patriotic oriented historical knowledge of citizens of the Russian Federation.

Here, finally, the specifics have gone. Here there is an increase in interest in the military history of the Fatherland, and the formation of a sense of respect for the heroic past of our country, and the preservation of the memory of the great historical exploits of the defenders of the Fatherland.

And there were the first mentions that specific events will be held.

4 section. Enhancing the role of educational, cultural and media institutions in the patriotic education of citizens.

Here, I thought that there was not even a trench to be dug for formations such as the “Military Review”, but a whole trench. However, if we discard priorities such as the improvement of mechanisms and forms in the promotion of patriotism, updating databases, monitoring Internet sites and the blogosphere, then nothing like this could be detected.

And the subparagraph, which says about "Countering all attempts to discredit, devalue, patriotic values ​​in the media, literature and art," generally caused a grin. It is clear that we oppose only under the gun. And on their own - no way.

But then the most interesting thing went. This is a program execution mechanism. Here it is necessary to explain a little. All organizations involved are divided into several groups. And depending on the group, get what? That's right, funding targeted programs from the budget. This is a very important point.

The most important, that is, the project coordinator, is the Federal Agency for Youth Affairs.

This is followed by the Principal Implementers of the Program.

The main implementers of the Program are:

The main performers also develop departmental programs and plans, approve co-contractors, organize and carry out a competitive selection of performers of specific works, involve public organizations and non-profit organizations in the implementation of activities, prepare reports for the Project Coordinator.

If in a nutshell - paperwork. But nationwide. It’s hard to imagine how many people will be engaged in drawing up plans, approvals, reports and other things. But it is obvious that the construction of patriotic education is being put on an unprecedented scale. On paper.

Here the question arises, who are the co-authors of the Program? These are those who are in business. Who will participate in the Program, if not at the highest level, but will take part in the development and other matters. Here is a list in which I allowed myself to single out those departments that caused not that surprise, but rather admiration.

I can understand everything, and the State Drug Control Service, and the FSB, but the Ministry of Agriculture has something to do with it? Together with the Ministries of Fisheries and Social Protection? And the participation of the Ministry of Foreign Affairs is somehow slightly surprising. At all, divide the cake?

And now let's get to the most important thing. To the money.

The numbers, whatever you say, are impressive. 16 with a half billion is a lot. However, if you carefully and with the calculator examine the annexes to the Ordinances, in which it is written, where and for what money will be spent for these 5 years, then optimism is somewhat ... disappears.

48,3 million rubles will be spent on research, monitoring and analysis of efficiency, development of methodological manuals.

Integrated system for the provision of data on military graves - 50 mln. Rub.

(I do not mind holding cadet and other balls, do not think, but still ...)

Collections of the organizers of the military-sports, student and other groups - 4 million rubles.

Forgive me, but I consider all this (especially flagging) as a kind of ballast. Who and where will watch these films and read manuals and manuals is the second thing. As well as it is more than doubtful that crowds of young people will break into film festivals. Yes, and contests readers.

But there are things that are more weighty, from my point of view.

It’s hard to say why the state order was included here. But it certainly won't be worse.

Observing children brought under the presidential program with burning eyes near the IL-2 and other exhibits at the Moninsky Museum, I would say that this is a necessary thing.

(Kazakov specially set it apart, because everything is in a heap - from songs and dances to chopping.)

And then, in fact, directly patriotic work "on the ground." Money for these articles will be allocated on a competitive basis. This is quite understandable.

Actually, everything. I didn’t find the articles to support the MIC themselves. Yes, the so-called "extrabudgetary sources" remain, local budgets (of which it is sometimes unrealistic to get something) and the most important source of funding is correct personal funds.

Of course, it would be foolish to expect more attention to the “lower ranks” from such a huge federal program. Below, exactly where our military industrial complex is located, local governments should work. Regional, district, city. With appropriate budgets.

But ... you won’t take money from the shelf if you don’t put it there. This is me about local budgets.

In general, the program is not bad. Especially if you close your eyes to the fact that most of the money just flies into the pipe. All these manuals and training manuals that no one will study, radio programs that no one will listen to, films that no one will see. I don’t even want to talk about seminars and symposiums that will be thoughtfully discussing the problems of reviving patriotism.

Someone lucky, some do not. Someone will visit the historical places of our heroic past, someone will give money for reconstruction. In general, for recons can be happy. One hundred million can be a lot of ideas to hold. And today, in my opinion, reenactors are a very important link in preserving memory.

Otherwise, everything is as usual. The top of the whole action is planned beautiful and significant. However, it will have absolutely no effect on the patriotic education itself. Upbringing and concrete work were done by people who are infinitely distant from all these seminars, contests and festivals, and will be engaged. Who can.

I specifically learned the plans at once in the three close to me MIC. One was created by former servants of the explosives, the second from the airborne forces, the third - the search engines. He asked how about participation in the program. Two did not hear about it at all, the third one heard it, but does not count on anything, since it does not fit the profile. As for participation in all events said to one: what Chichi? In the budgets of districts - zero. All at their own expense.

So it turns out that up there, they will be thinking for five years how to breed patriots in Russia. But patriots are not rabbits, unfortunately. So, we will have to educate those who can later become normal Russians. Parents and just caring. And at your own expense to shoe, dress, buy equipment, pay for trips, excursions and so on.

And we will still do it. Nowhere to go. We can still inculcate love for the Motherland better than the most qualified specialist in a school or specialized institution. Because we do it from the heart and without manuals.

Ctrl Enter
Noticed oshЫbku Highlight text and press. Ctrl + Enter
We are
Donetsk and Russia: common mourning, total sadnessIs there a solution to the problem of patriotic education of young people? Private initiatives
62 comments
Information
Dear reader, to leave comments on the publication, you must to register.